The long-running Model 1500 gets a carbon-wrapped barrel and HS Precision Stock. Here’s how it performed 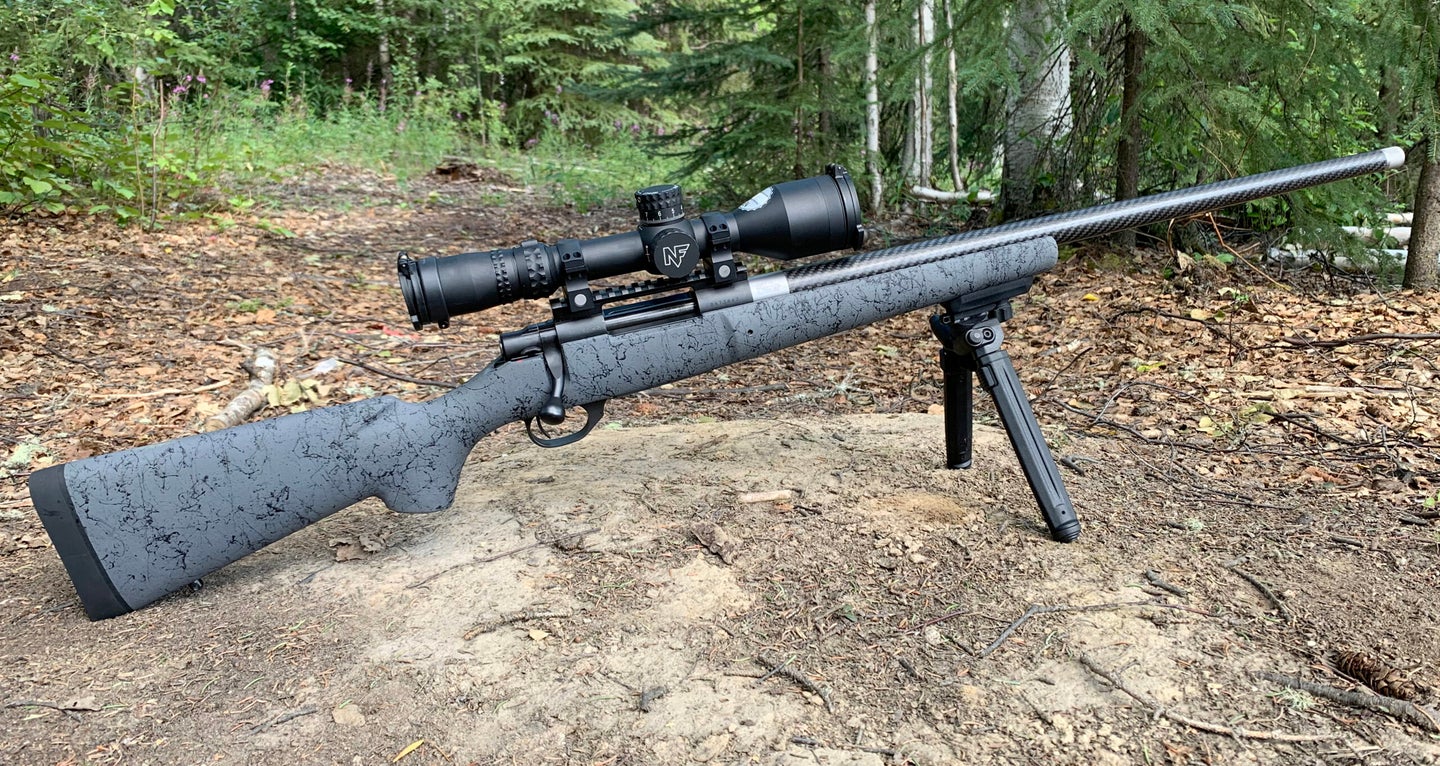 Howa Machinery of Japan has been making rifles for decades, and the Howa Model 1500 H

S Carbon Fiber is one of the latest in their most popular line: the Model 1500. They manufactured Arisaka rifles in the early 1940s and there’s a long list of manufactures that they have worked for since, including Weatherby, Mossberg, and Smith & Wesson. Howa introduced the model 1500 in 1979, and it’s their own niche in the rifle world. The Model 1500 is known for its accuracy and affordability; the Howa Model 1500 HS Carbon Fiber is at the top-end of their spectrum of non-chassis rifles. It features a carbon-fiber-wrapped barrel, and an HS Precision stock with an integral bedding block.

My sentiment for the 1500 runs deep—back to my youth. I still remember tagging along as my dad bought one in .223 along with a hundred rounds of ammunition loaded with 55-grain Hornady V-max bullets. It was to be our coyote rifle, and it put lots of fur on our stretchers. Later, I owned another Howa 1500 for a few years—a second-hand heavy-barreled .308 that was one of the most accurate rifles I’ve ever owned. I wish I’d never sold it.

In an age of futuristic-looking chassis guns, the Model 1500 HS Carbon has the look of a more traditional precision rifle. It’s simple, handsome, and I couldn’t wait to get it to the range.

The heart of the Howa Model 1500 HS Carbon Fiber is its action. It’s strikingly similar to the Weatherby Vanguard action, which makes sense: the Vanguard was inspired by the Model 1500, and is still manufactured by Howa. It’s a simple and reliable two-lug push-feed action with a 90-degree bolt throw. It uses two heavy action screws and has a notably thick tang to give the rear action screw plenty of grab.

The bolt features a large M16-style extractor that’s located at 10 o’clock on the bolt face, and a push-button ejector located a little over 60 degrees clockwise from it. Unlike Remington-style extractors that sit up inside a recessed bolt face, the Model 1500’s extractor is externally visible and serviceable. The bolt also features three gas pressure vent holes. In the case of a primer blowing or case failure, excess pressure directed into the bolt is intended to bleed out through these holes. The Weatherby Vanguard features these holes as well, but they are located on the side of the bolt when closed: the Model 1500’s vent holes point down toward the magazine when the bolt is closed.

The Howa Model 1500 action is simple and robust, and it features a pressure vent hole on the left side of the forward portion of the receiver. The bolt is removed by pressing a button along the port side of the receiver, just forward of the tang. The three-position safety lever locks the bolt when fully to the rear. The safety operation is stiff, and the folded metal tab safety lever is ok, but could use some refinement.

As its nomenclature suggests, the Howa Model 1500 HS Carbon Fiber features an HS Precision composite stock. The stock isn’t a single material. Instead, it has has carbon fiber, Kevlar, fiberglass, and aluminum components. Its most significant feature is a one-piece full-action aluminum bedding block. The barrel is free-floated and the stock features two barrel-centering set screws on either side of the recoil lug. These are used to center the barrel in the barrel channel. If the barrel isn’t perfectly centered, the screws can be adjusted to move it to the center of the barrel channel, then tightened to hold it in place.

The stock’s design is simple and comfortable. It has a straight comb, comfortable grip, and a flared and flattened fore-end. It has two standard sling swivel studs on the fore-end, one on the butt, and can accommodate a bipod on the front. It’s clearly a drop-in stock, so the fit isn’t to the level you’d expect from a custom rifle. It looks good, although there is some extra space at the back of the tang and around the trigger guard and magazine bottom-metal.

My sample is the HS Precision Gray color and is nicely finished. It has a Bell and Carlson-looking spiderweb drip finish of matte black on gray, and that coating doubles as an excellent non-tacky grip texture.

The Howa Model 1500 HS Carbon Fiber features a carbon-wrapped stainless-steel barrel. The one I got in .308 Win. is 24 inches long and threaded in a 5/8×24 pitch for a muzzle brake or suppressor. The barrel is pretty stiff, and I didn’t notice a huge point-of-impact shift when using a suppressor—a drop of about 3 inches. I’ll often see the P.O.I. drop significantly with sporter-weight hunting rifle barrels due to the weight of the suppressor—sometimes as much as 8 or 10 inches. The barrel has a 1-in-10-inch twist rate and should be able to handle any bullet you’ll find commonly loaded in .308.

One thing I really appreciate about the Howa Model 1500 HS Carbon Fiber is that it has a two-stage trigger. Perhaps it’s from my years of shooting service rifle, but I’m a sucker for two-stage triggers. The HACT (which is short for Howa Actuator Controlled Trigger) is a self-contained trigger group that is attached to the receiver via a single Allen screw and supported by nesting into a notch in the bottom of the receiver.

My sample Model 1500’s trigger is very good overall. It has a smooth take-up through the first stage, and a very tactile stop at the second stage. The HACT has a very clean and crisp break through that second stage. Mine breaks over at 2 pounds, 14 ounces, which is a good weight—not too heavy and not too light.

For testing, I fitted the Howa Model 1500 HS Carbon Fiber with a Nightforce NX8 2.5-20×50 scope, and a Magpul MOE bipod. The rifle is very comfortable to handle, and the widened fore-end aids with shooting off bags, barricades, and other supports—even with the bipod installed. It’s a peach to shoot, and the stock design and recoil pad make long days at the range a pleasant affair. I was concurrently testing four budget hunting rifles in .308, and the Model 1500 was significantly more appealing to shoot than any of those.

The action of the Model 1500 is smooth, and it has a light bolt lift. It has a 90-degree bolt throw and standard-sized bolt handle. The rifle single-loads ok, but cartridges will sometimes hang up when chambering if you just drop them into the receiver. It works better to snap single rounds into the magazine. Some rifles have magazines that will line up and feed single loose cartridges, but not this one. You’ll likely run into problems if you’re trying to drop single rounds into the Model 1500 receiver in a hurry.

The stock is a more traditional, sporter-style design. I really like the clean lines and streamlined look of the straight comb, but it’s pretty low. Considering the height of the 20 M.O.A. rail, and how far a scope with a 30mm or 34mm tube will need to sit above the bore, an adjustable or raised comb would make a better cheek weld and consistent head position possible.

This Model 1500 functioned flawlessly and ejected spent cases with authority. I noted that the ejector flipped cases around hard enough to mark up the rear portion of the receiver—not an uncommon issue. If you’re afraid of the “new” getting nicked off your rifle you might take issue with it, but it’s not a point of contention for me. I appreciate the full five-round magazine capacity—many .308s will only hold four.

I had high expectations for the Howa Model 1500 HS Carbon Fiber’s accuracy. My old, well-used .308 Model 1500 was exceptionally accurate—and it wasn’t even bedded. I was a bit underwhelmed by the accuracy of this rifle. I tried everything I could think of to ensure that user error wasn’t at fault. To be thorough, I recorded 25 5-shot groups at 100 yards through the Model 1500 HS Carbon with 11 different .308 loads. For an accuracy aggregate, I averaged my best 10 recorded groups.

Read Next: My Rifle is Better Than Yours—and Always Will Be

The rifle had some erratic groups in the mix with most loads, and during testing I checked and re-checked the scope base and rings. I also checked and re-torqued the action screws and tried to fine-tune the barrel-centering set screws. I cleaned the rifle approximately every 25 to 50 rounds.

The Howa Model 1500 HS Carbon Fiber is a great-looking and well-balanced rifle. The look and finish of the stock are good, and the carbon-wrapped barrel is a nice addition. It’s very comfortable and stable to shoot, and I really like the full bedding block. The two-stage trigger is excellent for a stock production trigger. It’s unique in a field that’s primarily populated with single-stage triggers.

Overall accuracy is the biggest shortcoming of the rifle I tested. Although it’s perfectly adequate for almost anybody’s hunting needs, I expected better—especially at its price. It has all the right parts, but in this case, they don’t add up quite as well as they should.

The Howa Model 1500 HS Carbon Fiber is a nicely executed high-end Model 1500. It’s a rifle that’s reminiscent of the days before chassis rifles, when bedded sporter-style stocks were king. Chassis rifles have their benefits, but there’s nothing like the feel of a more traditional stock. The Model 1500 HS Carbon has a great feel, good parts, and features, and is a sweetheart to shoot suppressed. I expected better accuracy with factory ammo from mine, but it could likely be improved with handloading.