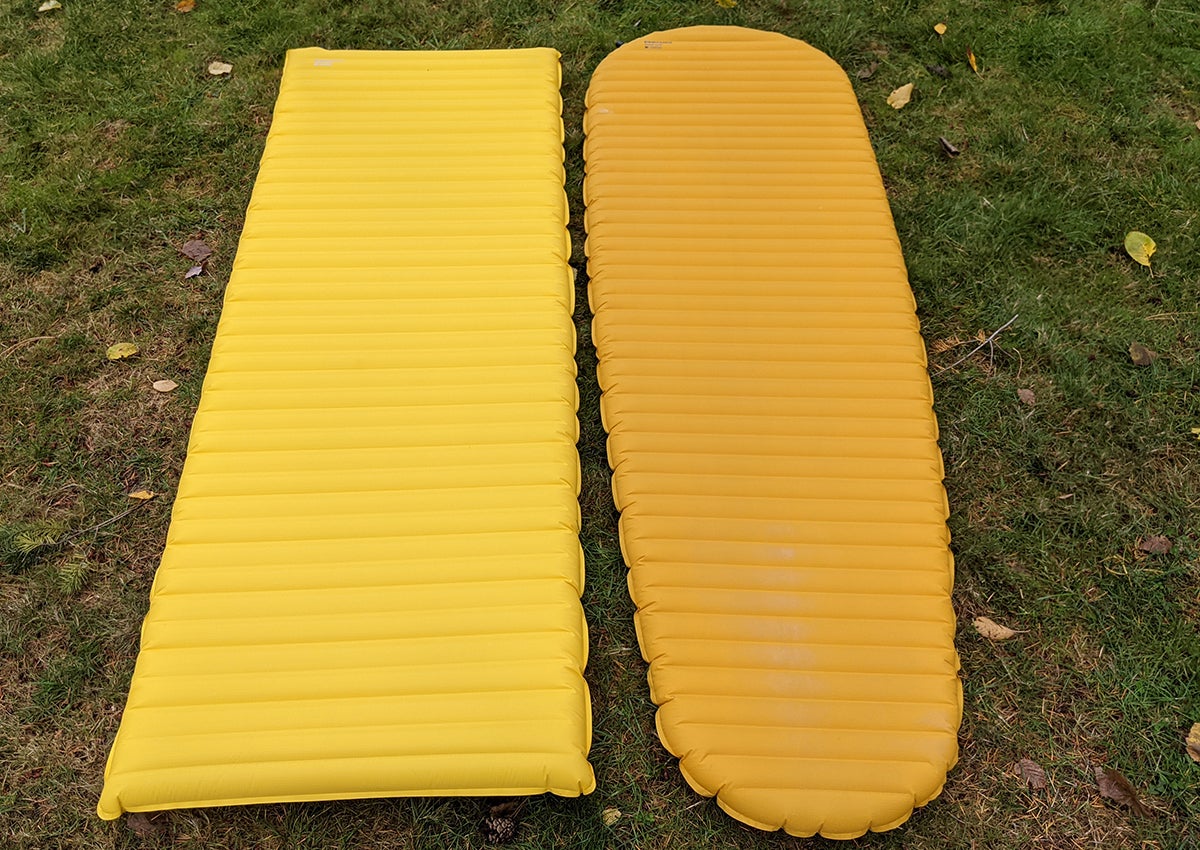 For years, people have loved to complain about the Therm-a-Rest NeoAir Xlite. The valve was garbage. The pump sack was no good. And that noise—there was never a question of what crinkling pad was making all that ruckus at the neighboring campsite. But, along with the NeoAir Xtherm, the NeoAir Xlite is one of the bestselling sleeping pads out there. It also happens to be the sleeping pad I use on just about all of my outdoor adventures.

The Therm-a-Rest NeoAir Xlite isn’t the lightest sleeping pad on the market (that would be the NeoAir UberLite) or the warmest (that would be the Exped Dura 8R). However, it is is the best balance of warmth and weight. At 12.5 ounces for a regular-sized pad, it’s as light or lighter than its competitors’ ultralight pads. And with an R rating of 4.5, it’s plenty warm enough for both alpine and shoulder season adventuring. That versatility has made it a mainstay for all manner of backpackers, from weekend warriors to thru-hikers. Finally, Therm-a-Rest resolved the number one complaint of the Xlite in the allegedly 83 percent quieter NXT model.

Maybe, like me, you thought the reason the NeoAir Xlite is so much louder than the rest of the best backpacking sleeping pads is its shell fabric—that 30D nylon that the website describes as “lemon curry” hued. Not so, as it turns out. The material making all that ruckus is the very thin metalized film inside the pad that provides its insulating powers, what the company calls Thermacapture. While Therm-a-Rest wouldn’t share what this material actually is, they did tell me that there are only so many materials that provide an acceptable level of insulation while still welding together. Those materials happened to be extremely loud and crinkly.

So this is the tradeoff at the heart of Therm-a-Rest’s NeoAir pads: You don’t get that high insulation without the crinkle. Now, the updated NXT version of the pad claims to have significantly reduced the noise level, by as much as six times. To achieve this, they decreased the size and increased the number of Thermacapture layers inside the pad from one layer (as depicted above) to three thinner layers.

In addition to turning the volume down, this change also increased the R value from 4.2 to 4.5 without changing the weight. An R rating of 4.5 is great for year-round use. Your sleeping bag‘s temperature rating is designed to accommodate its max low with a 4.8 R value pad, but at this weight, 4.5 can’t be beat.

For anyone who is unfamiliar, “R value” refers to how well a sleeping pad resists, or insulates you against, the cold of the ground. One is the lowest number on the R value scale (literally the same as sleeping on the ground) while 10 is the highest, typically only needed in the most extreme conditions.

In years past, R value measurements were the wild west with each brand conducting their own tests using different protocols, or sometimes just guesstimating. But in 2020, R ratings were standardized by the American Society for Testing and Materials (ASTM): “Standard Test Method for Thermal Resistance of Camping Mattresses Using a Guarded Hot Plate Apparatus.” While Therm-a-Rest tests their sleeping pads in-house using a cold chamber on-site in their Seattle warehouse, other sleeping pad manufacturers send new products to Kansas State University for testing. So while which R value is right for you and your next trip is subjective (different people have different internal thermostats, after all), the comparative warmth provided by each pad is standardized.

The NeoAir has the best R rating for its weight by a mile—it’s not even close. Let’s take a look at how the competition stacks up:

Testing the Therm-a-Rest NeoAir Xlite in the Field

I’ve used various Therm-a-Rest NeoAir Xlites for years, including on the Pacific Crest Trail and Colorado Trail, and have been consistently impressed by their durability and versatility. Each pad I had easily lasted for thousands of miles before it developed holes (easily repaired), had the internal insulation start to break down (replaced by Therm-a-Rest’s limited lifetime warranty), or turned moldy (my fault—don’t put your gear away wet, people). I typically pair this pad with either a 10 degree or 20 degree quilt, which is plenty to keep me warm in nighttime temperatures that dip down to freezing.

In addition to being warm, lightweight, and durable, I’ve also found the Therm-a-Rest NeoAir Xlite to be comfortable. But while I’m not a light sleeper (and that does go double after a long day of backpacking), I couldn’t help but notice what is undeniably its most well-known feature: the noise.

Read online reviews of the Therm-a-Rest NeoAir Xlite and something that comes up again and again is how much noise the pad makes at the slightest movement. Words like “cellophane” and “potato chip bag” are thrown around. People describe it keeping them from getting to sleep, waking their partners up, and waking everyone at their campsite up. I even found a review that someone wrote just to complain about how too many people are using this pad and it’s keeping them from sleeping in the backcountry.

Therm-a-Rest’s newest NeoAir Xlite NXT is essentially the same exact pad as its predecessor, but with one important difference: It is allegedly quieter. To verify this claim, I employed the highly scientific method of inflating both the NeoAir Xlite NXT and an older NeoAir Xlite that was in my gear closet, and then rolling around on them. I’ll be honest: I couldn’t hear a difference. But my older Xlite is upwards of five years old with probably 100 on-trail nights. It had been a lot louder when I first got it. After the insulation in my pad softened and quieted over time, it was similar in sound to the brand-new NXT.

Out-of-the-box, the NeoAir Xlite NXT is still noticeably louder than other best-in-class backpacking sleeping pads, like the Sea to Summit Ether Light XT or the NEMO Tensor. However, after using it on various trips for a few months, I conducted a second side-by-side comparison. This time I noticed that the NXT version of the Xlite really was quieter than my older model, and was now comparable to other top backpacking sleeping pads. So if you’re unsure about the noise level when you first inflate this pad, rest assured: It will get quieter over time.

What the Therm-a-Rest NeoAir XLite NXT Does Best

At the end of the day, the purpose of your backpacking sleeping pad is to make your trip more comfortable. By day, the Therm-a-Rest NeoAir XLite NXT takes up less than a Nalgene’s worth of space in your pack and puts the least amount of weight possible on your back. At night, it protects you from the cold of the ground, so that you don’t wake up shivering in your bag. And while lowland summer adventuring doesn’t call for such a high R value, do you really want to stay below treeline on all your adventures? I didn’t think so.

What the Therm-a-Rest NeoAir Xlite Does Worst

I had hoped that Therm-a-Rest might take this opportunity to update some of the details of the NeoAir Xlite with the release of the NXT version, but no dice. It still has the same winglock valve, which is significantly less intuitive to use (I will someday remember to reorient the wings when I’m inflating the pad) than its competitors, without providing any discernible benefit.

It also still has one of my least favorite pump sacks. It took twelve breaths to inflate the pad using Therm-a-Rest’s pump sack compared to four breaths using the best-in-class pump sack included with Exped’s pads, while weighing basically the same amount. The connection point between the pump sack and the winglock valve also requires way more elbow grease to get on than others I’ve tested. (Although any pump sack is still better than doing things the old-fashioned way.)

But if you’re regularly trekking through the shoulder season or into the alpine, what are you waiting for? You’ll sleep warmer, hike lighter—and now you won’t wake up abruptly, dreaming of potato chips.