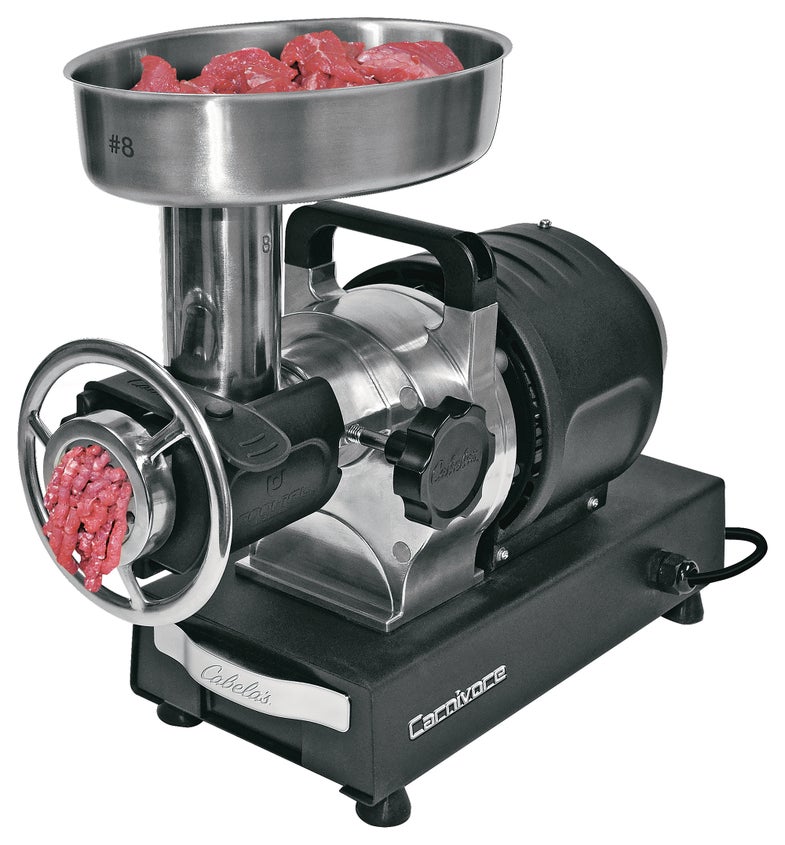 
Elk roasts, wild turkey thighs, storage bags packed with goose breasts, whitetail shanks, and black bear hams…your freezer is never more full than at the end of hunting season. The best way to grind this stockpile down to size is to invite over some buddies and turn these odds and ends into burger, sausage, and jerky that will carry you through the winter (and probably well into the summer).

Any electric grinder can handle 20 pounds of well-trimmed venison once a year. But if you’re a true wild-game collector, you’ll need a little more firepower to chew through your stock of meat.

If you’ve ever used an under-powered grinder, you know how that can turn an enjoyable experience into a real chore. With that in mind, we put five heavy-duty grinders to the test against the most sinewy, gristly meat in our freezer.

EDITOR’S CHOICE It was obvious that the Carnivore was a well-made machine the minute we pulled it from the box. All the other grinders in the test are simple-looking stainless-steel cubes. The Carnivore has smarter design features and extra flourishes, and it earned style points for its matte-black finish. Most important, it brought high performance to match its good looks.

The grinder ran noticeably quieter than the others in the field—just a pleasant hum that lets you know it’s on. It gobbled down the stringiest venison shanks we could throw at it. We ran it on and off for about six hours and it never came close to overheating. We had to clear the knife and plate only once during the test.

One of the Carnivore’s best features are the oversize handles on the grinding head, which make disassembly much easier when you’ve got slippery hands. The Carnivore also comes with a tool for pulling out the shaft, which can be a difficult task on any grinder when it’s wrapped in sinew and coated in fat.

The final standout feature is the Cool-Tek Gel Ice Pak, a plastic pack that you freeze and attach to the machine’s neck when you’re grinding. Heat is the enemy of a good grind, turning fresh, cool burger into mush. This is why it’s recommended to put the grinder parts (head, neck, drill, knife, and plate) in the freezer beforehand. The Carnivore takes this a step further with its ice pack, which did effectively cool the neck.

Secondary features include a nice carrying handle, a storage tray for parts, and a knife that only fits on the shaft the proper way (many grinders on the market allow you to put the knife in backward).

The Carnivore is the heaviest grinder in our test (it weighs 45 pounds), and it’s a little skimpy on plates, shipping with just two plates, and four sausage funnels. But the top-of-the-line performance and features make it the machine you want when the meat piles up.

The Big Bite is a tendon-chewing, meat-grinding beast. It smoked all the other grinders in the speed test; however, it’s important to note that LEM submitted a machine with a larger neck size than the others, so it was able to take down more meat more quickly by design.

LEM is a known and trusted name in the wild-game-processing world. The Big Bite weighs 40 pounds, and comes with three different grinding plates and three different sizes of sausage funnels. If you’re looking for add-ons, you can separately purchase a foot pedal, a ground-meat-packing system, and a variety of meat mixers.

The Big Bite has a sturdy, dense construction, and unless you plan to grind granite with it, I suspect you will wear out before it does. But just in case, LEM provides a five-year warranty for its machine (that’s longer than most other grinder warranties out there).

The Guide Series grinder has a basic design similar to Cabela’s Carnivore, but without the style and extra features. It’s a solid machine all around (weighing 38.5 pounds), with plenty of grinding power and speed. In fact, the first time I shoved a chunk of meat into the drill, it shot burger across the kitchen, but this stopped happening once the machine got warmed up.

This grinder includes a nice storage tray, three plates, and three sausage tubes, which helped boost the value scores for the unit. The meat tray locks securely in place, but the head takes a bit of effort to unscrew.

The Guide Series grinder lost some points on the gristle test, as it jammed up more often than the top finishers. That said, it was still able to rip through two venison shanks without stalling out. Overall, the Guide Series unit is a solid value.

The Weston Pro Series is a more compact version of the Gander Mountain grinder, but with more horsepower. In fact, the Weston, Gander, and Cabela’s units have similar basic designs, and even some of the same parts, but price, performance, and additional features vary greatly.

The Weston has a knife sharpener attached to the back of the unit, which is a useful addition for when you’re trimming meat and your knife gets dull. It also comes with a storage tray that fits nicely into the meat tray. It comes with two plates, a sausage star, and three sausage tubes.

It packs .75 horses into just over 30 pounds, making it the second-­lightest grinder in the test. The Weston grinder performed well, chewing up turkey and venison without issue. But it didn’t fly through meat as quickly as the top units. Weston got points for backing its product with a five-year warranty.

The STX Turbo Force II is a compact grinder that was fighting a little above its weight class, and that was a disadvantage in this test. It had respectable grinding speed and power, but it did get totally jammed up when we forced a second untrimmed venison shank down it.

Easily the loudest grinder in the test, this machine will run quieter after a 5- to 10-hour break-in period, according to the manufacturer. The Turbo Force II has two grinding-speed settings and a reverse option for helping to unjam the drill.

The best thing about this grinder is all the extras it comes with—five grinding plates, three cutting blades, and a foot pedal. All that, plus solid performance for $239, made it the runaway Great Buy of the test.

It weighs just 15 pounds. So, if you’re looking for a storable unit for lighter duty (say, two big-game animals a year), then the Turbo Force II is a solid option.