LifeStraw Review: We Put This Affordable Water Filter to the Test 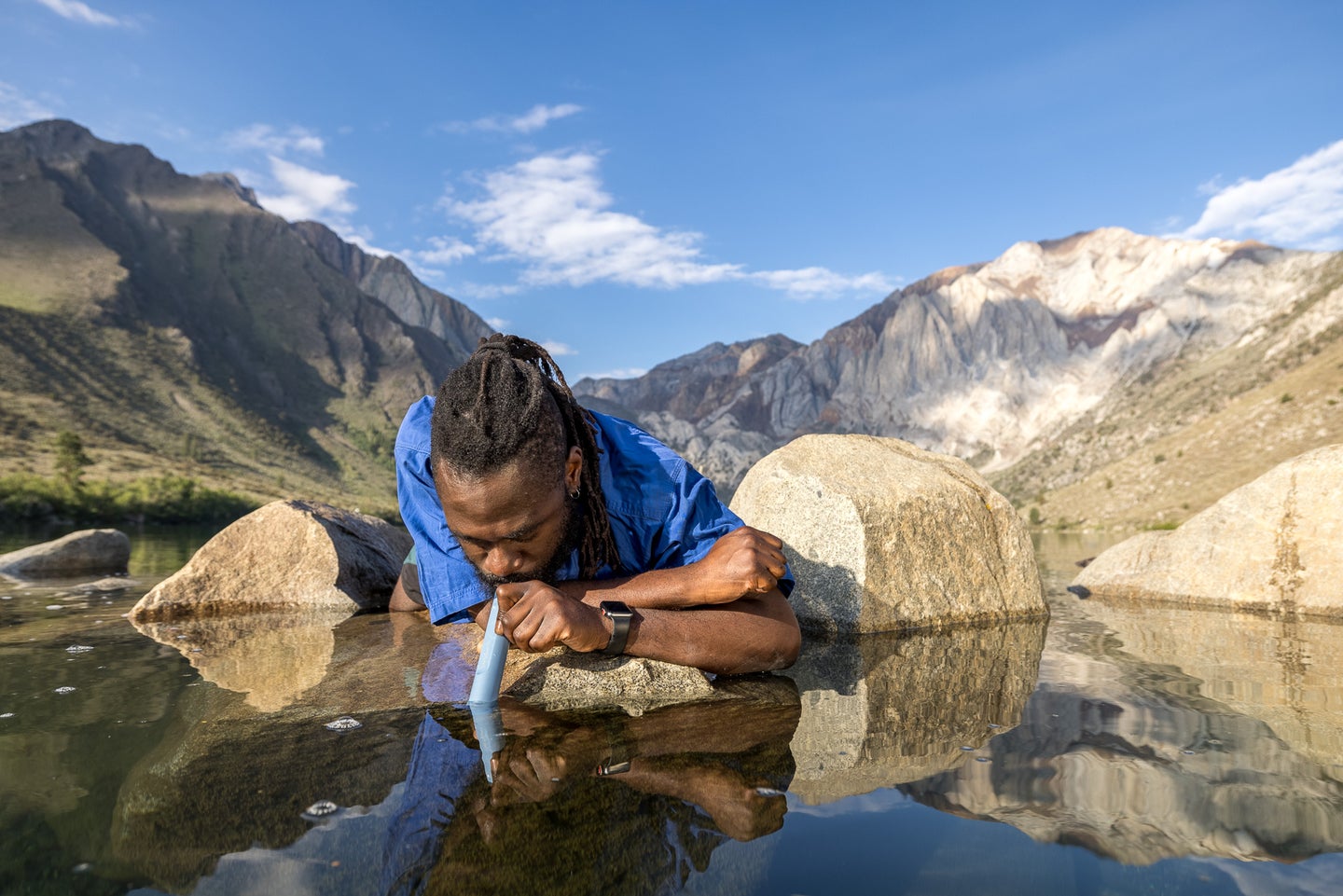 If you’ve outfitted an emergency supply kit or go-bag anytime in the last decade, you’ve probably at least looked at the LifeStraw. This lightweight, simple, and cheap blue straw has become so ubiquitous that many people have started buying them in bulk, five at a time. But how practical is the LifeStraw in a potential real-world setting, say, if your municipality’s water supply was compromised or you had to flee your home during a natural disaster?

The original LifeStraw can only be used like a straw, but the Peak Series straw has a bit more versatility. The design of the dirty end means it can be attached to a water bottle, or used with a bladder hydration system. Using the Peak Series Straw in tandem with a water bottle also allows you to use it like you would a squeeze-bag system or a gravity filter.

If this is your first time purchasing a water filter of any kind, the most important thing to note is that the LifeStraw does not come with an attached reservoir. If you are on the go in an area where water access is limited, it’s important that you also carry a vessel to hold water, such a standard disposable water bottle or a Nalgene.

Testing the LifeStraw in the Field

In a best-case emergency scenario, your home still has running water, but your local reservoir has been impacted and water must now be treated before it can be consumed. (And we all know how boiling water is a drag under these conditions.) So my first test was to simply hand a glass of water and a LifeStraw to everyone in my family and see what they thought.

I tried it out first—I definitely needed a lot of suction to move the water through the filter, but it was easy enough to use. After a few sips—the LifeStraw was easier to use after each one—I handed it over to my husband to try. “It wasn’t that bad,” he said. “The Peak Series is easier to use.”

Next up was the three year old. She was excited to help (she spends a lot of time these days “testing” blankets and pillows in makeshift piles in our living room), but after giving the LifeStraw a try for five seconds or so, she lifted her head and wailed, “I can’t do it!” Turns out the LifeStraw isn’t as family friendly as I had hoped. “I’m so thirsty!” she continued. Now, this wasn’t a real emergency situation, so it was easy enough to just take the straw out and let her drink the water normally, but imagine if it had been?

Next, we took the two LifeStraws on a little field trip around the neighborhood. The first stop was a stream running out of a slopey wooded area near our home. Usually in the fall, there is a gurgling, fresh-smelling stream of water coursing down this slope, but on this particular day—after an unusual stretch of dry weather—there was barely a trickle. Worse, it smelled surprisingly anaerobic—a bit like a pile of compost had gone off.

“I’m not drinking out of that,” said my husband flatly. Fair, but science is science so I was committed to at least taking a small sip to see if this was something I would be willing to do in an emergency situation.

It took more than a few tries at squatting down (those LifeStraw models in the ads are clearly more flexible than I am) to figure out how to get the straw into the water without toppling over, but I eventually got there. The water was…warm…but otherwise tasted OK. Honestly, I’m trying not to think too much about it.

Next was the lakeshore. This is an active lake, in all the best ways—summertime is full of boats and seaplanes and fishermen and swimmers. But it’s also a mess, with the debris from wartime plane crashes still hanging out at the bottom and regular sewage overflows that get piped in when it rains too much. It’s the kind of lake where you keep your mouth closed when you’re in it, and you always take a shower afterward.

It was significantly harder to drink out of the lake than the stream. The gentle waves made it challenging to get close to the water’s edge while the rocky beach was difficult to find my footing in. In this scenario, I would much prefer to dip a reservoir directly into the water and then drink from that. But, like with the wooded stream, the water was fine, and I felt fine after drinking it.

What the LifeStraw Does Worst

While testing the best backpacking water filters, the Peak Series from LifeStraw just didn’t stack up against the likes of MSR, Platypus, Katadyn, and Sawyer. Both the gravity filter and the squeeze-bag filter (which are using similar technology) became slower to use over time, and the gravity filter eventually stopped working entirely.

But from an emergency preparedness standpoint, the biggest problem with the LifeStraw—both the original and the Peak Series—is that it does not filter out viruses. That means water you drink through the straw could still be contaminated by norovirus or rotavirus (two viruses that are responsible for food poisoning).

Viruses are super small (about a tenth of the size of a bacteria), which is why it’s so hard for a traditional filter to remove them. There are a few that use activated carbon (Grayl and Rapid Pure are examples here), which viruses stick to (the technical process is called “adsorption”). This works pretty well—although during our test of the best backpacking water filter these tended to clog up significantly faster than traditional hollow core fiber filters, including the LifeStraw Peak Series technology. They also aren’t as effective at filtering out viruses from water colored with sediment or tannins, such as my local creek. Another option is the MSR Guardian, which has pores so small—.02 micron—that they can filter out viruses. But that filter typically runs at about $400, which is about 20 times more than a LifeStraw.

What the LifeStraw Does Best

This is one of the least expensive water filters on the market, so it is worth considering if you are purchasing in bulk—especially in the multipacks. Whatever your budget, the low cost of the LifeStraw means there’s no excuse not to have a water filter in your home or go bag.

And they do work as advertised. LifeStraw is accredited by a third-party lab—they even post their results online—to certify that they meet US EPA & NSF P231 drinking water standards. When used correctly, you can trust the LifeStraw to protect you from the likes of Giardia and E.coli.

If you’re looking at stocking your emergency preparedness kit with a few LifeStraws, it’s worth upgrading to the Peak Series version, due to its versatility and (comparative) ease of use. But it’s also worth checking to see if another of the best backpacking water filters might better meet your needs. The MSR Guardian, while expensive, is capable of removing viruses, while the Sawyer Squeeze Mini is only a couple of dollars more than the LifeStraw, and comes with reservoirs to scoop and hold your water while you’re on the go.