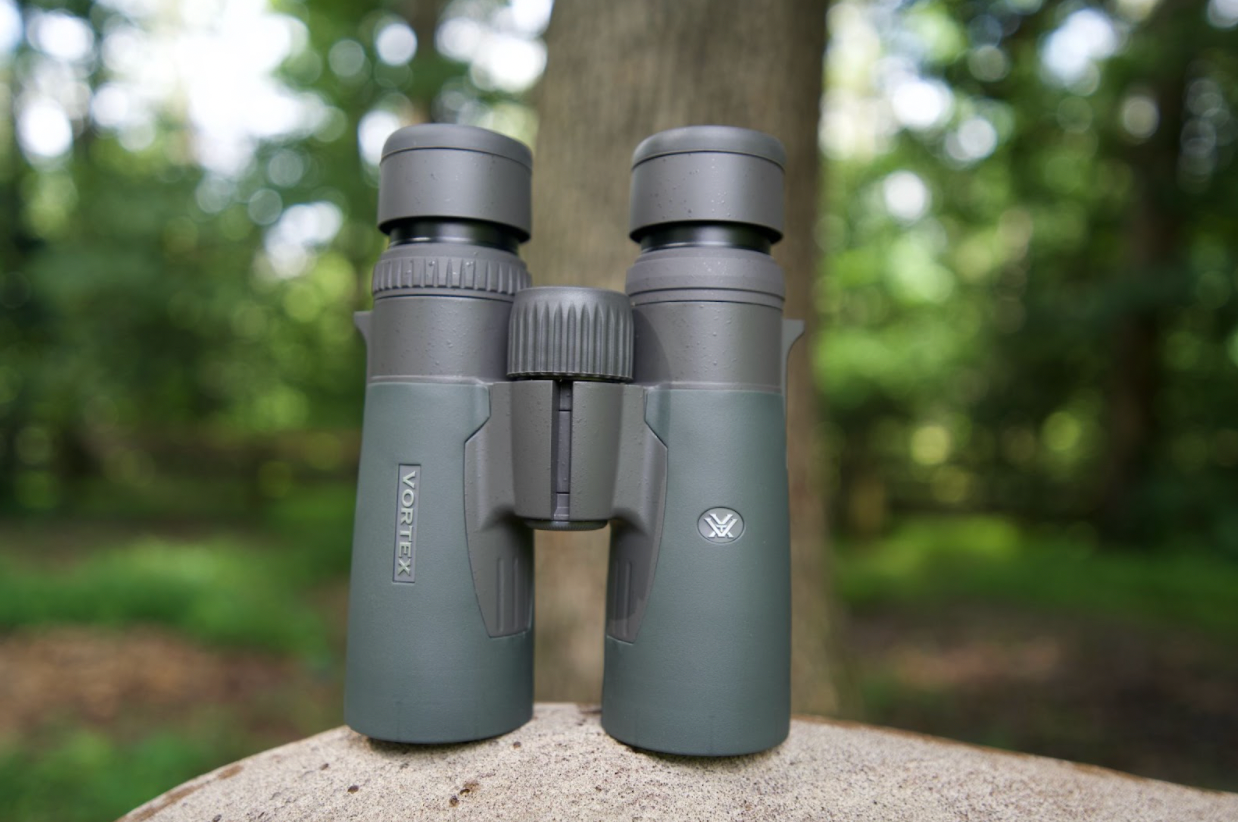 Tight, bright, and priced just right, this celebrated Vortex Razor HD 10×42 binocular hits the sweet spot in delivering excellent optics in a nicely-sized package for around $1,000. That price point is certainly more than you’d pay for an entry-level binocular, but it’s half to one-third as expensive as class-leading European binoculars. And in most conditions, you’ll hardly notice the difference in optical quality. What you get for that money is an excellent all-around roof prism binocular, optimized for hunting, but suitable for backyard birders, backpackers, and travelers.

Razor HD binoculars from Vortex is a sexy thing. The first thing you notice is its pleasing design, from the modern open bridge and oversized focus wheel, to its slim taper and its appealing gray-green armor. The barrels have thumb-grabbing dimples on their undersides, allowing users to keep the binocular balanced in most uses, facilitating one-hand operation. That ergonomic touch makes the Razor HD seem even lighter than its 25-ounce (1.5-pound) weight.

That heft is worth noting, though, because it comes from a quality of glass that many entry-level and mid-price binoculars don’t use. Vortex uses a variety of Japanese extra-low-dispersion glass in the Razor HD that often weighs more, lens for lens, than other classes of glass.

The APO lens system features a number of color- and image-correcting lens elements. All lenses are fully multi coated and the Razor HD uses Vortex’s premium XR Plus coatings on the objective and ocular lenses. Those coatings help resist scratching, repel dust and moisture, reduce glare, and boost color rendition across the spectrum — though I notice the binocular has a bit of a bluish tint.

What the Razor HD Binocular Does Best

There is a tendency among optics designers to overbuild their flagship models. Think of those 3-pound 10×42 models like the original Swarovski SLC and early Leica Trinovids. While overbuilt is good to some extent, the best hunting binoculars are light and compact and that’s also the best attribute of the Vortex. It is absolutely portable, capable of sliding in jacket pockets, or when attached to a binocular harness, it fits in pouches sized for 8×32 models. It’s the rare 10×42 that can do that, which makes this one of the best compact binoculars.

But the Razor HD doesn’t give up any optical horsepower inside that trim frame. It has a wonderfully wide field of view, and the big ocular lenses deliver ample light with the 4.2mm exit pupil.

The binocular’s portability is matched by its durability, with one notable exception that we’ll discuss below. The armor is reasonably thick and rugged, and the lens coatings resist dust and scratches. The oversized focus wheel is positive and turns with both precision and authority. Similarly, the right-barrel diopter turns easily enough to make quick adjustments, but is tight enough to prevent being bumped out of focus. A locking collet on the diopter would be a great addition to ensure that it doesn’t move when being deployed or stored in a chest harness.

The balance of the Razor HD is wonderful, though it should be noted that the neck strap attachment points are located just a tad too far forward, causing the binocular to tip inward slightly. That’s a very minor quibble that is easily remedied by where you grip the binocular to deploy it. I’ve learned to grab the bino a little up the eyecups to draw it from my harness, then move my hand back to the belly of the tubes for glassing.

READ NEXT: Best New Binoculars of 2021

Vortex Razor HD in the Field

I’ve toted this binocular on several hunts, and recently took it on a week-long backpacking trip on the California side of the Sierra Nevadas above Lake Tahoe, where it was invaluable for picking out distant trail markers and alpine cairns that guided me far above timberline. It was also fun to look at picas and chipmunks up close — their expressive faces filling the frame of the binocular.

Because the Razor HD focuses as close as 6 feet, it works as a macro lens just as well as it works to magnify distant objects. Again, that portability was a key asset in my choice of optic. I was counting ounces in my choices of food, fishing gear, clothes, and water, but this little binocular delivers far more optical performance than its tight chassis indicates.

The Vortex handled the dust and debris — as well as the rock-banging indignities — of the high country, and tucked unobtrusively out of the way in my chest harness when not in use. I ended up sharing the binocular — the only one in the party — among my hiking mates, and each of them remarked about the brightness and crispness of its image.

One note about the chest harness. New Razor HDs ship with the very useful and adjustable GlassPak binocular harness. It’s a $50 value, and a piece of hunting gear that’s worth every penny.

What the Vortex Razor HD Does Worst

Above, I promised more details about the biggest shortcoming of these otherwise good binoculars. It’s the rubber eyecup gaskets: the small cushion that keeps the metal eyecup from cutting your brow when you bring the binocular into your face.

The rubber rims have a tendency to come off with very little encouragement. I found myself having to stuff the gaskets back into the narrow races where they belong, but after a few times of removing the binocular from the chest harness, the rims would work themselves loose again.

It’s a small problem, but it’s annoying, and ultimately pretty fixable. I’m not the only person who has reported this problem. If you check out almost any binocular review of the Razor HD, you’ll see this deficiency is noted with various degrees of intensity. It should also be noted that Vortex is well aware of this shortcoming, and recommends that users glue the rim into the race using a Gorilla Glue, or other brand of powerful super glue. Vortex also says it has now changed the adhesive used to secure those gaskets.

A more useful note about deficiencies is in the relatively shallowness of the Razor HD’s focus. I have to constantly feather the focus wheel in order to move between objects that might only be a few yards apart. That’s a testament to the fine focus of this optical instrument, but in the field it means that I’m constantly racking the focus wheel. I’d rather have a deeper focal length. On the other hand, that’s a very minor quibble, as it’s equally nice to have a tack-sharp focus, regardless of distance.

How These Binoculars Stacks up Against its Peers

As I mentioned at the outset, the Vortex Razor HD binoculars occupies a fairly rare place on the price and performance spectrum. At about $1,000, it’s certainly no raging bargain. On the other hand, it delivers an image and durability in line with optics costing twice as much.

Does the Vortex Razor HD Accomplish its Mission?

This was my third Vortex purchase. A rifle scope, a spotting scope and then these. The first season out with these, both rubber eyecup rims came off, which is really inconvenient smack dab in the middle of hunt season. I wouldn’t call these the best binoculars out there. Having said that, I shipped them to Vortex and they repaired them and sent them back 30 days later. And the optics are good. I’ll keep them as an expensive backup pair.