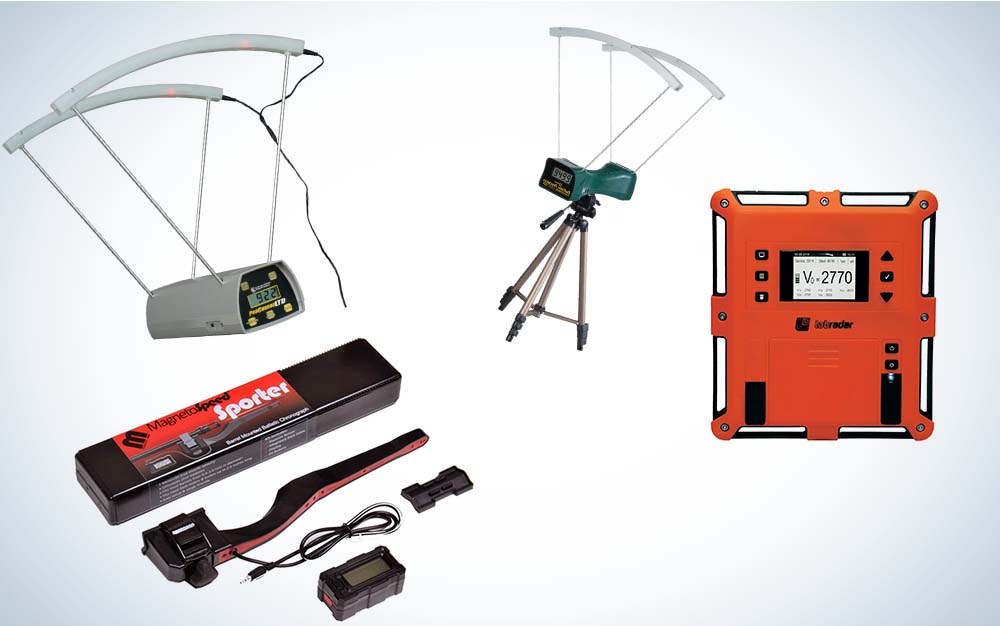 Ballistic data is the foundation for repeatable accuracy, no matter if you’re a hobby hand loader, archery nut, precision rifle shooter, or long-range hunter. Whether you’re selecting the perfect sight tape for your compound bow or stretching your precision rifle to 1,000 yards, a chronograph is an essential tool to squeeze out all the performance your gun or bow has to offer. Even better, there are different chronographs for different applications and various price points — you need to know the differences to determine which is the best chronograph for you.

Why You Need a Chronograph

What is a chronograph? A chronograph measures bullet speed or arrow speed. The different models on the market measure that speed in different ways, which will be an important factor in choosing the right chrono for you.

Adding a chronograph to your toolkit is the quickest way to lessen the learning curve if you want to shoot farther and more accurately. While you can certainly gather ballistic data without a chronograph, it’s an arduous and time-consuming task that can lead to discrepancies and inaccuracies and — even worse — wasted ammunition. Analyzing data on previous engagements (otherwise known as DOPE) is critical to developing holdovers at various distances. Before you start dialing your turrets, you should spend time using a chronograph.

As a rifle, pistol, and bow shooter myself, I decided to get input from a true expert. So I talked to Ryan Muckenhirn, Consumer Sales Manager at Vortex Optics, to find out just why you need a chronograph, and how to find the best chronographs on the market. Muckenhirn leads Vortex’s consumer sales team that troubleshoots up to 1,700 calls per week with customers to answer their optic, firearm, and other technical questions. Muckenhirn is a passionate hunter, reloading enthusiast, and recently assisted in wildcatting a new cartridge — the 6.5 BC.

“Get the gun over a chronograph — any chronograph,” said Muckenhirn. “For the most part, all the major firearm manufacturers print average velocity values on the ammo box. However, the important value the shooter needs to know is the velocity at which their specific firearm pushes the projectile downrange. Once we understand velocity, the rest is pretty simple and can be entered into a ballistic calculator.”

“Using 2,700 feet per second that’s posted on the box as an average muzzle velocity, that means I’ll need to dial 30.06 MOA to ring steel at 1,000 yards. However, knowing my rifle shoots that bullet with a muzzle velocity of 2,840 feet per second means I need to dial 27.72 MOA — roughly 3.25 MOA difference. At 1,000 yards, that’s the difference of 35-inches of bullet drop — the difference of a complete miss to an impact,” said Muckenhirn.

Reloaders, archers, air gunners, and rifle shooters need quality chronographs for reliable data. The guess work of finding the best chronograph is taken care of for you with our picks of chronos for any budget or use case.

LabRadar chronographs are for data nerds that want to understand projectile nuance throughout the entire flight path. It provides data for bows, rifles, pistols, and airguns, but for bows and airguns you’ll need the added airgun or archery accessory. The advanced doppler technology comes at a price ($559.95, to be exact), and uses radar and electromagnetic waves transmitted downrange when a projectile is fired. The unit seeks interruption on the radar to plot specific points on a flight path out to 100 yards. The result is incredibly detailed information that displays velocity and trajectory caused by projectile drag for custom DOPE charts on rifles and sight tapes for archers, unlike other chronographs that only measure velocity at the muzzle.

LabRadar units require the shooter to fire downrange while adjacent to it and produce a 3-dimensional picture that provides greater detail in the projectile’s flight path rather than a simple velocity input at the muzzle. For archers, that means LabRadar data can differentiate a flight path between two different bows that shoot identically weighted arrows, but different weight distribution throughout the shaft.

“Two archers could shoot an arrow at the same velocity, but as other modifications are made to the arrow, such as vane configuration or helical, you’re going to modify how that arrow flies over distance,” said Muckenhirn. “One bow might shoot flatter than the other over distance, even if they’re shooting the same velocity out of the bow.”

The same is true about bullets, which furthers the importance of LabRadar technology. Similar to the archery example, bullets can be fired from different firearms, and even if their muzzle velocity is consistent at the shot, that doesn’t necessarily mean their flight paths will remain constant.

“Other chronographs don’t take things like bullet drag into account. Instead, they only tell us velocity, which is part of the equation, but not the whole story,” said Muckenhirn.

The MagnetoSpeed lineup of chronographs is mounted directly to your rifle and provides accurate velocity values without worrying about environmental factors such as lighting conditions. For an extra $20 investment over the Beta Master, the MagnetoSpeed Sporter lives up to the simplicity MagnetoSpeed touts when they say, “Strap on. Plug in. Shoot!” The unit uses a bayonet-style sensor that can handle different barrel types, ranging from pencil-sized ultralight rifles to a .50 caliber muzzleloader by simply adjusting with the included shim system. Given it’s portable design, the MagnetoSpeed Sporter is the perfect solution for a traveling hunter or competitive shooter who needs to confirm their DOPE before the hunt or match.

“While you can’t chrono your bow with a MagnetoSpeed Sporter, the convenience for a rifle shooter can’t be overstated,” said Muckenhirn. “For a negligible price increase ($179.99, compared to the $149.99 Beta Master), you’re getting arguably the most accurate velocity readings on the market.”

While certainly a step up in terms of accuracy and portability, the MagnetoSpeed Sporter produces a velocity reading that’s only accurate at the muzzle, similar to the Beta Master. If you want even more granular data, there’s room to dive deeper into even more capable chronographs, like MagnetoSpeed V3.

The Caldwell G2 Ballistic Precision is a top-notch option for archers who value Bluetooth connectivity with their phone and repeatable accuracy shot after shot. Unlike other optical chronographs, this Caldwell chronograph uses an inverted sensor system for superior performance in harsh lighting conditions, regardless if you’re indoors or outdoors. Archers can measure average velocity, standard deviation, minimum and maximum velocity spread, and even environmental factors by using the free app. All data is easily recalled within the app, and can even be exported via SMS or email for instantaneous sharing.

While the G2 ships with an included tripod, it admittedly isn’t as sturdy as other aftermarket options to stabilize your chronograph. However, the ¼-20 threaded insert will accept all of the most common baseplates, so you can likely pull double duty with your favorite glassing tripod. Everything packs away in an organized bag for easy transportation

If you’re on a budget or would rather spend more of your hard-earned cash on ammunition or tinkering with various arrow configurations, consider the Competition Electronics ProChrono LTD. At just $97.74, the ProChrono will do the job for firearm and archery enthusiasts alike. Competition Electronics backs the chronograph with their two-year warranty, and even promises customers they won’t charge more than half the current retail price to repair any current model chronograph, regardless of its condition.

While the ProChrono is the most affordable option in the group, it’s important to be realistic about your expectations with the unit. Unlike the Caldwell G2 that measures velocity to within +/- .25% of measured velocity, the ProChrono promises an accuracy reading of +/- .5%. Competition Electronics also recommends their aftermarket indoor lighting system when shooting indoors, which will set you back another $50.

Things to consider when choosing the best chronograph for your needs.

Q: How accurate are Caldwell chronographs?

The Caldwell G2 measures velocity to within +/- .25%. But like any optical chronograph, consistent lighting is key for achieving accurate readings.

Premium chronographs like the MagnetoSpeed and LabRadar are extremely accurate. Optical chronographs tend to be less accurate because various lighting conditions can change their reading. The best way to achieve accurate results with optical chronographs is with one of the many light kits on the market.

Q: Do I need a shooting chronograph?

If you plan to shoot long range, you need a chronograph to help predict bullet drop. Without one, you’ll be wasting a lot of ammo to determine how to compensate for various distances. A chronograph is not necessary for archery, but it’s a nice to have for making sight tapes and testing setups.

There isn’t a one-size-fits-all when it comes to finding the perfect chronograph. However, you can narrow your focus by understanding your goals as a shooter. Whether you want to nerd out on all the data you can get your hands on for customized sight tapes and DOPE charts or need an accurate muzzle velocity to get started; there are plenty of options to fine-tune accuracy. With plenty of data at your fingertips, don’t be afraid to get creative and start experimenting with different loads or arrow configurations until you’re consistently shooting out the 10-ring.