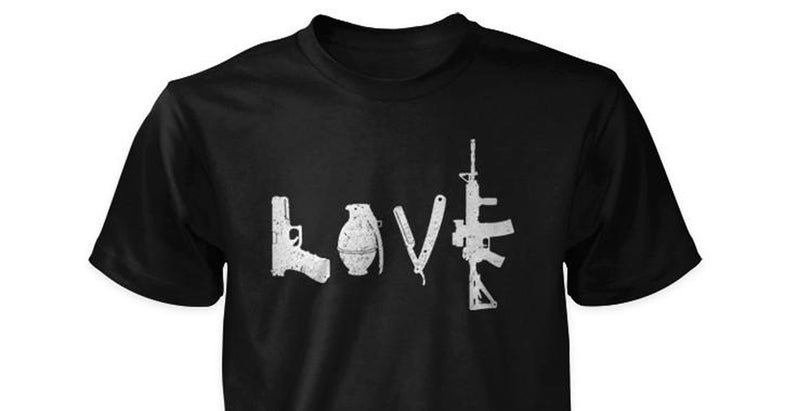 A version of the T-shirt worn by Schoenecker, which is sold by TheThreePercenter.com. thethreepercenter.com
SHARE

Citigroup and Bank of America have issued new corporate guidelines that restrict doing business with “high-capacity” magazine manufacturers and with retailers that sell firearms to anyone under 21-years-old or without a three-day “waiting” period.

The actions are “preventing law-abiding Americans from exercising their constitutional rights,” the National Rifle Association’s Institute For Legislative Action (NRA-ILA) maintains in an April 15 statement.

Citigroup, the nation’s fourth largest bank, now requires “new retail sector clients or partners” to refrain from selling “high-capacity magazines” and to prohibit the sale of firearms to adults aged 18 to 20 years-old.

“Citigroup, Bank of America, and other major corporations would do well to recognize that the American voter, through their elected representatives, has repeatedly rejected restrictions on their Second Amendment rights,” the NRA-ILA states. “Moreover, in the case of these banks, shareholders should question the wisdom of corporate leadership that would willfully alienate pro-gun voters and lawmakers.”

— Tucker: Bank of America’s gun statement: Why we should worry

— How They Voted: NRA dominates gun voting in 115th Congress

— Don’t be surprised if your doctor asks you about guns

A Wisconsin high school student has filed a lawsuit against his school district after he was sent to “the cubicle” for defying a ban on wearing his gun T-shirts.

Matthew Schoenecker, a freshman at Markesan High School, is suing the Markesan School District because the T-shirt ban infringes on his First Amendment free speech right to support the Second Amendment, he told WISN-TV.

Schoenecker’s wardrobe includes shirts that spell out “Love” using a handgun, grenade, knives and a rifle, and another featuring an image of different firearms declaring “Celebrate Diversity,” according to WISN-TV.

Schoenecker and his parents were reportedly told by the school principal John Koopman that the teen would not be allowed to wear any of his collection of shirts depicting guns and other weapons.

When Schoenecker arrived at school last week sporting the “Love” T-shirt, he got in trouble.

According to the Milwaukee Journal Sentinel, his parents were summoned to the school. When they arrived, they found their son confined to a small room known as “the cubicle” because he would not cover his gun T-shirt.

According to the Journal Sentinel, the suit claims Koopman violated Schoenecker’s freedom of expression by restricting him from wearing shirts that depict guns and other weapons in “a non-violent, non-threatening manner.”

The Journal Sentinel reports the suit also contends Koopman’s personal, case-by-case determination of which shirts are “inappropriate” violates Schoenecker’s rights to due process.

“I didn’t think it would get this big, this bad,” he told WISN.

— Teen gets banished to ‘the cubicle’ for defying ban on gun shirts. He comes out swinging.

— 5 Guns Every Texan (and Every Other American) Should Know

Gun Owners Rally For Civil Rights Across The Nation

Gun rights supporters — some armed — gathered at state capitols across the U.S. on April 14 to reassert their voice an effort to calm anti-gun hysteria being incited by gun control advocates capitalizing on growing concerns for safety following a series off high-profile mass shootings across the nation, most recently the Valentine’s Day school shutting on Parkland, Fla.

According to the Associated Press, gun owners From Florida to Washington State, from Maine to California, gathered at peaceful protests to listen to speakers who warned restrictions on gun ownership or use eventually could lead to a ban on gun ownership, which is guaranteed under the 2nd Amendment.

“If you have a building and you take a brick out every so often, after a while you’re not going to have a building,” said Westley Williams, who the AP said carried an AR-15 rifle as he joined about 100 people in Cheyenne, Wyo., for a gun rights rally in front of the state Supreme Court building.

In Augusta, Maine, gun rights rally organizers told the AP about 800 people showed up to protest what they fear are attempts to limit 2nd Amendment rights.

In Atlanta, more than a quarter of the estimated 160 rally-goers carried weapons, as well as flags and signs saying “Don’t Tread On Me” as they listened to speakers talk about the right to bear arms, according to the AP.

— Delaware: Rally in Dover pushes back against gun control

— Montana: ‘We must speak’ – Gun rights activists rally in Kalispell

— Illinois: Second Amendment supporters gather at Capitol to speak out against gun control

— Washington: With their rights ‘under attack,’ pro-gun advocates rally in Olympia

— Now N.J. Democrats want to go after the NRA and gun-friendly states

— South Carolina: Voters will get to decide whether Norman’s gun display was OK

— Rhode Island: Moms Demand takes a victory lap, and get right back to work

The National Rifle Association Institute for Legislative Action (NRA-ILA) has joined a lawsuit that challenges Maryland’s requirement that a citizen show “good and substantial” reason to obtain a concealed carry permit.

The NRA-ILA announced on April 12 that it was signing onto Malpasso et al v. Pallozzi, a lawsuit filed in the U.S. Court for the District of Maryland that challenges the state’s restrictions on carrying a handgun outside the home.

“This effectively bans most citizens from exercising their Second Amendment rights outside of their homes,” said Chris W. Cox, executive director, NRA-ILA.

“Denying the majority of law-abiding citizens the right to carry a firearm outside of the home is unconstitutional,” Cox continued. “The government cannot require citizens to prove a special need in order to exercise their fundamental rights.”

The suit is also a “may issue v. “shall issue” challenge of Maryland’s requirement that residents must prove they are under some extraordinary imminent threat in order to be granted a handgun permit.

“There is no reason why a law-abiding citizen should have to prove why they need to exercise a right before they are allowed to exercise it,” Cox said. “We don’t do that with any of the other provisions in the Bill of Rights. As long as a person is not prohibited from firearm ownership, they must be allowed to carry a firearm.”