Itching for the old-school style of hunting? Get primitive with this gear 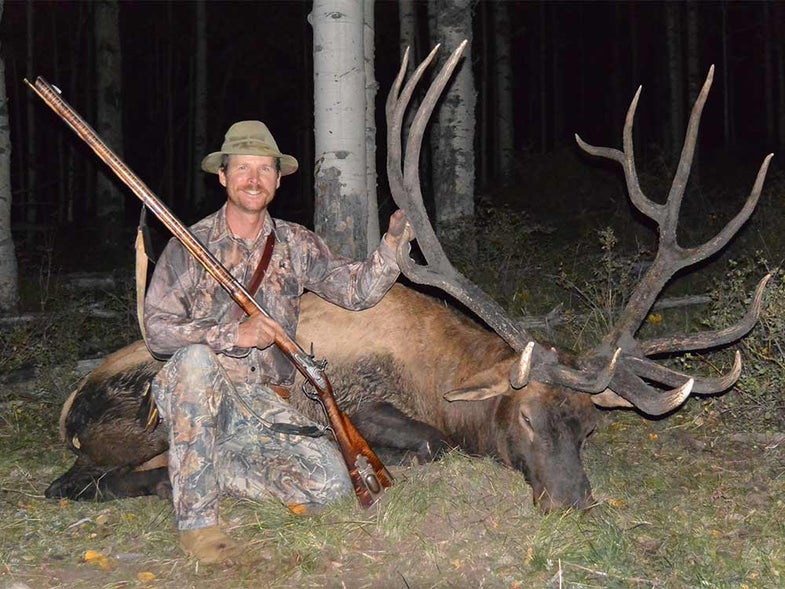 Author with a big bull elk he harvested with a flintlock rifle and round ball. Aram von Benedikt
SHARE

The “primitive” longrifle (muzzleloader) was America’s first significant design contribution to the firearms world. Long, graceful, and accurate, Golden Age longrifles (circa 1780 to 1840) rendered America’s fighting men and frontiersmen more accurate, more deadly, and, of course, more classy than their musket-packing compatriots in other countries. Longrifles defended our freedom through several major conflicts, which is something inline muzzleloaders will never be able to touch.

Modern hunting muzzleloaders have superseded traditional ones almost everywhere nowadays. But they’ll never be as traditional or historic. Nor can they kill anything more dead than a longrifle can. Sure, they might shoot farther, have stainless barrels, and sport variable-power riflescopes. But that’s the enchanting thing about a traditional muzzleloader is that it presents a challenge to your hunting and woodsmanship skills.

Here are 11 things you’ll need—along with some advice on how to use them—to be an effective longrifle shooter and hunter. 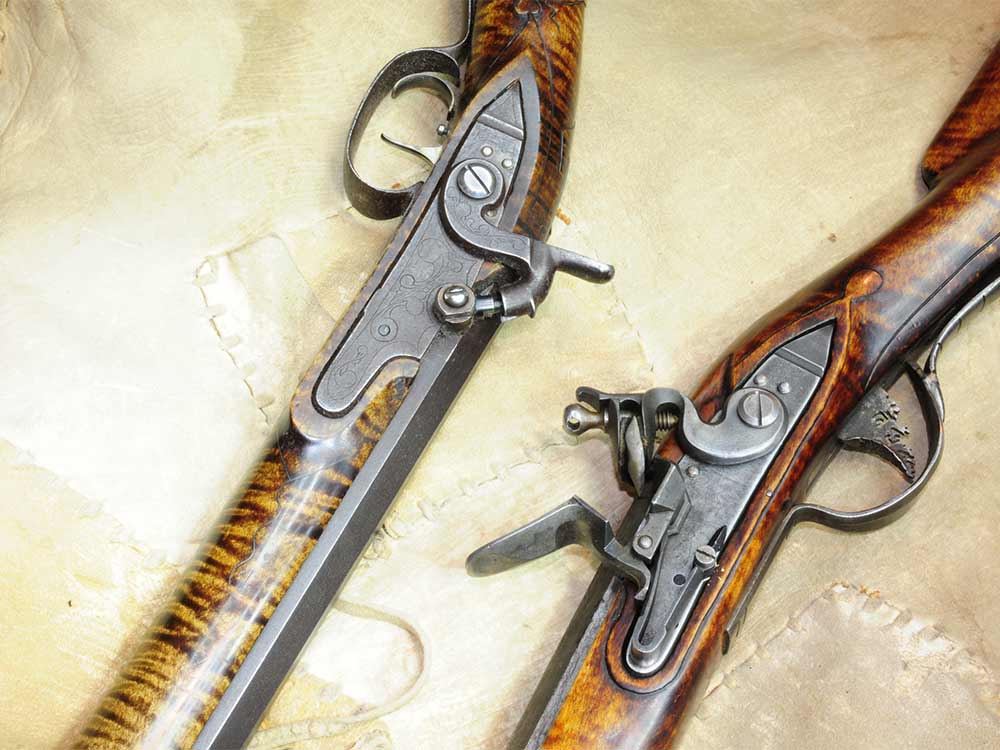 You’ll need a traditional muzzleloader. Kentucky rifles, Tennessee, Southern Mountain, Virginia, Pennsylvania, and Hawken-style rifles all fit the bill. Full-stock rifles (meaning the wood stock reaches all the way to the muzzle) predated the half-stock versions (wood stock that reaches only to the rear ramrod thimble) and were originally made during the “Golden Age Rifle” period—the time period that many historians consider to be the pinnacle of artistry and craftsmanship in American rifle-building history. Golden-Age longrifles were primarily flintlocks, with significant numbers either made or converted to caplock late in their tenure.

Half-stock rifles—including the legendary “Hawken” rifles—were popular during the late Western movement. They were typically of larger caliber, with shorter, heavier barrels, and were a bit more suited to horseback travel. They were usually fitted with caplocks.

For hunting you’ll need a rifle in .50 or .54 caliber. Fifty caliber is great for everything up to and including deer. Some states require .54 or larger for elk and bigger game, so check local regs. I’d recommend starting with a caplock—they’re easier to shoot accurately, and are less challenging in damp weather than flintlocks. Get a rifle that fits you well. If you custom order one, your gunsmith should take length of pull, drop at comb, and other measurements so he can custom fit the rifle to you.

My personal favorite longrifles are a 1790s-era Virginia style flintlock with a 42-inch barrel, and an early 1800s-era Southern Mountain caplock with a 38-inch barrel. Both are .54 caliber. 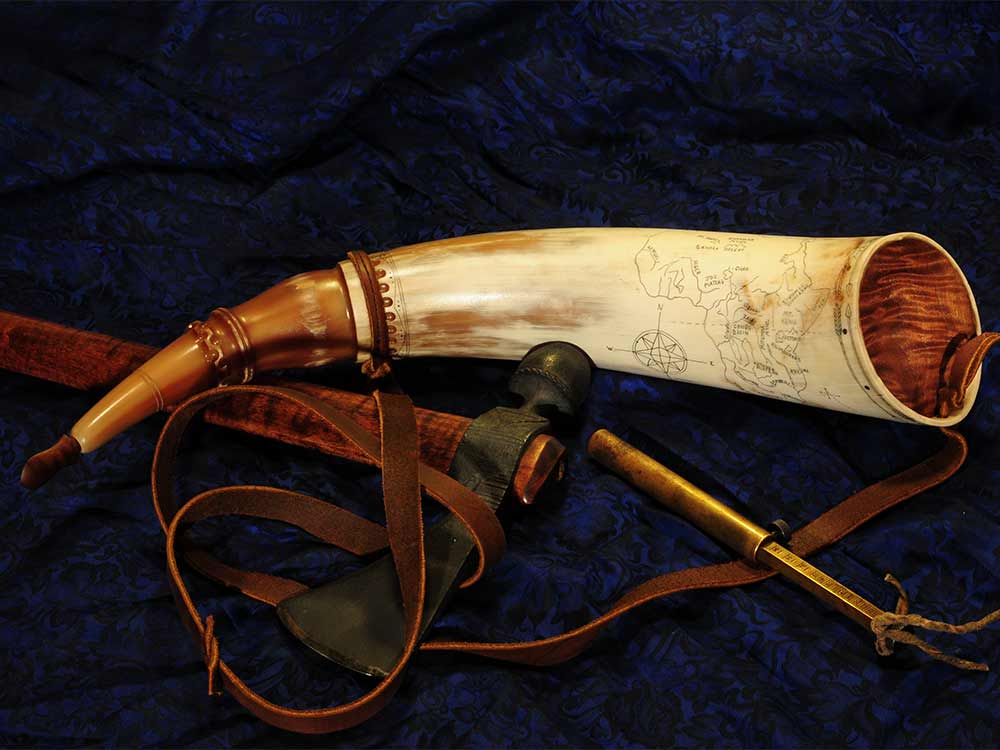 A hand-carved and scrimshawed powderhorn.

Early powder horns were often works of art, intricately carved and scrimshawed with the frontiersman’s name and other significant information, including maps and navigational tools.

You can buy or make your own horn, and it can be as simple or as intricate as you wish. You’ll want it to hold at least 30 charges of powder, and have a leather or woven strap so you can hang it across your shoulder and chest. 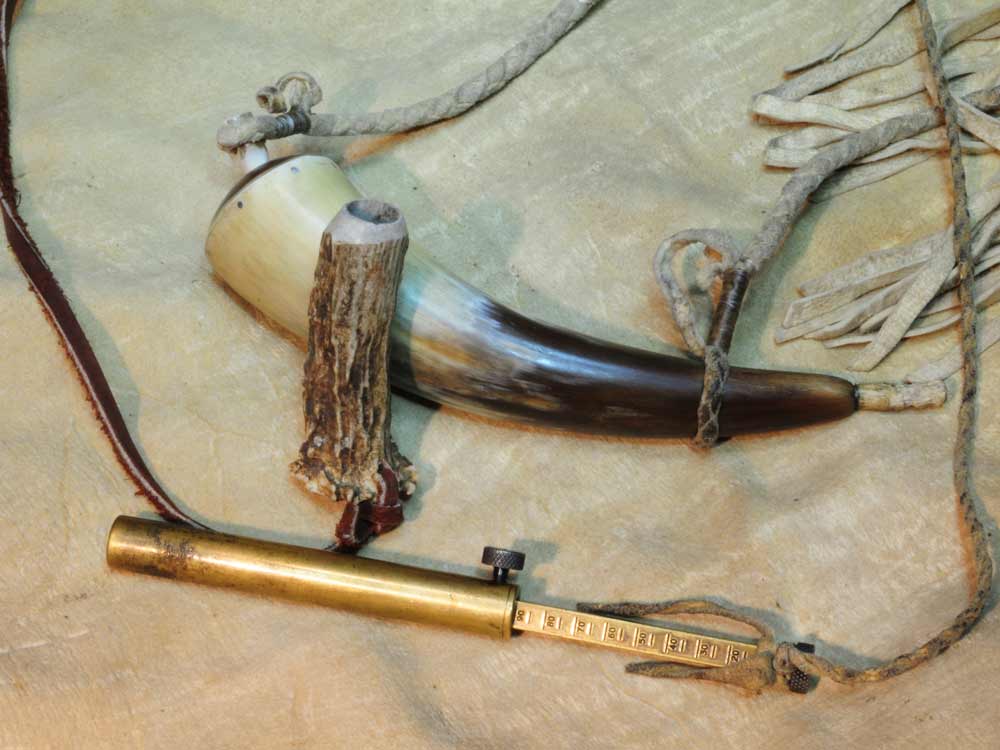 Adjustable brass powder measure, and a fixed-charge measure made from antler.

Black powder is measured by volume, and the size of your charge determines the velocity and power of your load. My favorite measure is a simple adjustable brass affair with which I can charge 10 to 120 grains. A typical hunting load will range from 60 to 120 grains, depending on caliber, barrel length, lock type, and species hunted. (Note: a flintlock will typically require about 10 grains more than a caplock to attain similar velocity.) 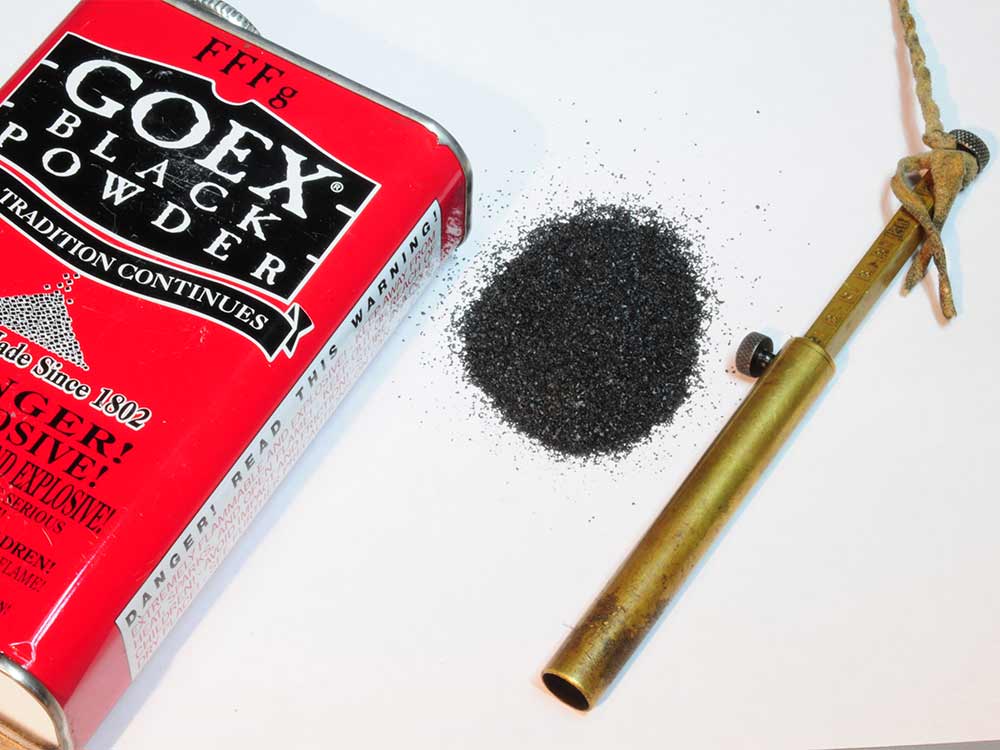 I can hear the question already: Why not use a black powder substitute? Well, you can, but black powder is traditional, ignites very well, and gives that awesome belch of sulfurous blue smoke and fire. Substitutes can work well, and are somewhat cleaner and less corrosive, but typically are harder to ignite with traditional caps or flintlock. They also can generate higher pressures that may be dangerous in traditional rifles. I recommend always using black powder in traditional muzzleloading rifles.

Black powder comes in several “sizes” or granulations, designated by the number of “Fs”. The more Fs, the smaller the granulation. Triple F (FFFg) and Double F (FFg) are the most popular granulations among traditional muzzleloader shooters. I personally prefer FFFg, finding that I get slightly better velocity and less fouling than with FFg.

There are 7,000 grains (a weight measurement, not a granular count) per pound. You can calculate your round-per-pound count by simply dividing 7,000 by your charge weight (i.e. 7,000 divided by 90 grains = 77 loads per pound of powder). 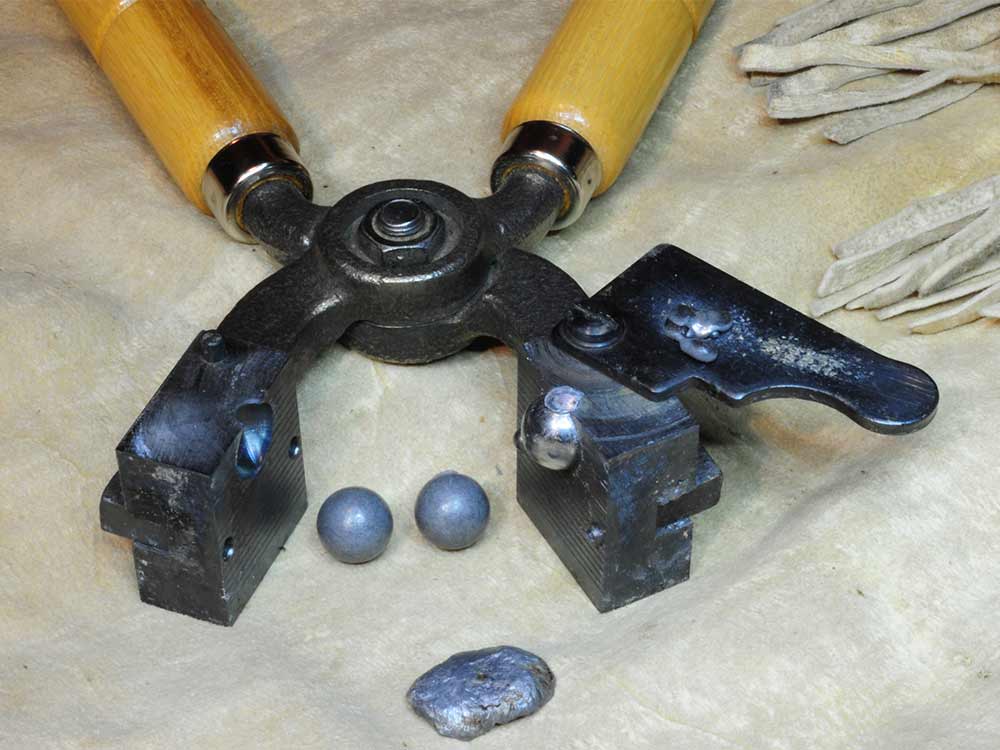 Round balls with the mold that cast them, and the deformed bullet that killed the bull elk above.

Spherical (round) bullets shrouded in a cloth or split buckskin patch were the original sabot. They were easy to cast from pure lead heated over a hardwood fire, and shot well from the slow-twist rifled barrels of the day. You can easily cast your own with an appropriately sized mold, a melting pot and dipper, and some pure lead. Round balls can be purchased from manufacturers like Hornady and Speer, in either cast or swaged iterations. There are typically two sizes for every caliber (for example .490 and .495 for a .50 caliber rifle). For best accuracy you will want a very tight fit between bore, patch, and bullet. This can be adjusted by ball diameter and patch thickness. The patched bullet should be hard to start into the bore, and give significant resistance when ramming home.

Round balls are extremely fast, accurate, and very lethal for a short distance. A .45 caliber 128-grain round ball in front of a hunting charge will punch right through a ¼-inch mild steel plate at 25 yards. I’ve done it. And they are very lethal out to about 100 yards. Problem is, though, once they loose a certain amount of velocity and spin, they begin to veer (i.e. yaw) rather dramatically. Every rifle and load is different, but most will suffer a dramatic loss in accuracy somewhere between 125 and 175 yards. But no matter: the bullet has slowed below ethical hunting velocity by then anyway. 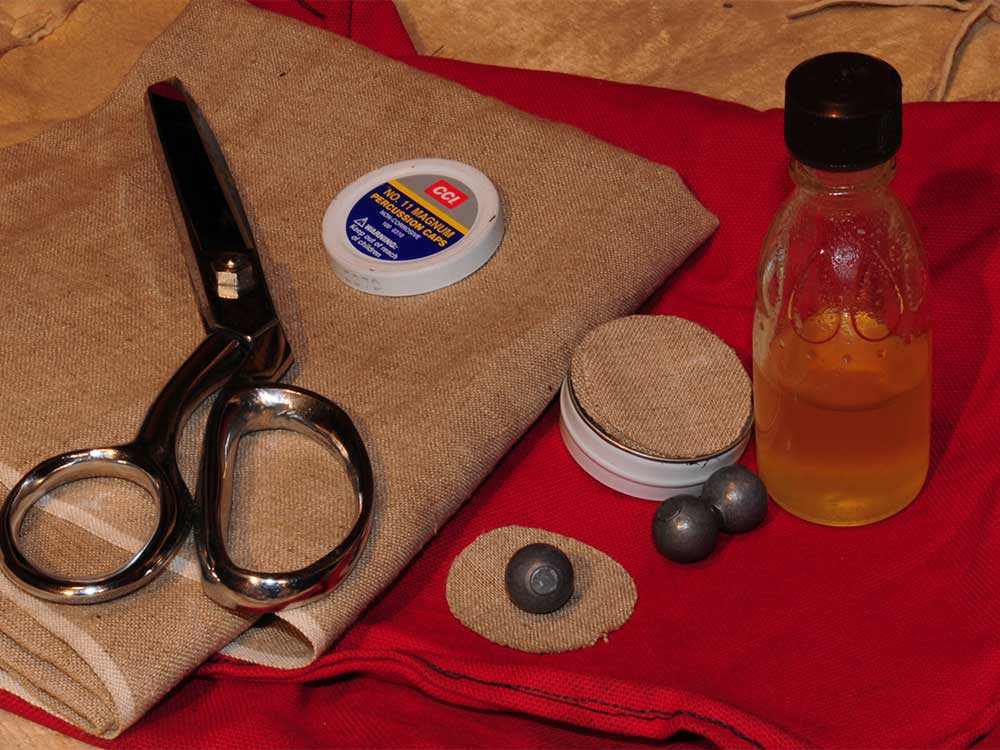 When you load your longrifle the first thing you’ll do is measure and pour the powder down the barrel. Next, you’ll lay a lubricated cloth patch over the muzzle and seat your round ball in it. The patch will wrap around the bullet, conform to the ball and the rifling (creating a solid “grip”), and then do some cleaning as it travels breech-ward. When you fire your rifle the patch will escort the ball out the muzzle and then drop away.

“Pillow Ticking” patches are very popular, and can be purchased pre-cut and in several thicknesses. Lots of shooters, myself included, experience great accuracy with them. My personal favorite material is brown linen canvas made for painting on. It’s hard to find though (look at art supply stores) and expensive. Still, in my opinion it’s the most accurate material available.

Your patches should be as tight as possible without tearing. Diagnose this by finding just-shot patches and examining them. You should see black rifling lines all around slightly frayed edges, but no torn spots or holes. Go tighter until you find torn patches, then back off a thickness. Pillow ticking patches are usually available in 18, 20, and 22-thousandth iterations so you can select the tightest fit for your rifle. The linen I like to use measures 22-thousandths thick. Pillow ticking patching comes pre-cut in rounds suitable for certain calibers; for instance, you can purchase patches that will work for .30 – .39, .40 – .49, .50 – .59, and so on. You can also cut your own round patches by hand with a pair of scissors. Cut them about three times the diameter of the ball (i.e. 1.5-inches for .54 caliber).

For much of my shooting, and all of my competition shooting, I simply use saliva to lubricate my patches. “Spit” patches are very accurate and keep the bore surprisingly clean. For hunting you’ll need an oil or wax based lubricant that you can apply beforehand. Products like Bore Butter work well, but my personal favorite lubricant is bear oil – fine, amber liquid obtained by rendering black bear fat. I oil my patches so they are just barely saturated and then store them in an empty #11 cap can. 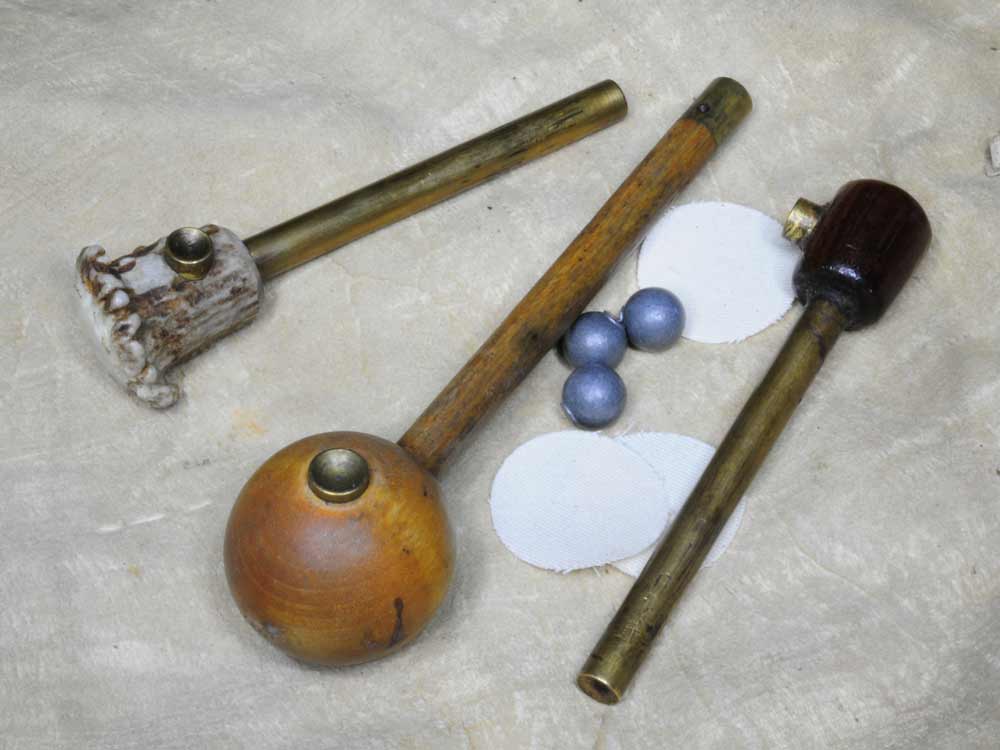 A short-starter is simply a short section of ramrod that’s used for starting your tightly patched round ball down the barrel nice and straight. They are rather simple, and you can buy or make your own. Just make sure the diameter of the rod is the appropriate size for your caliber. 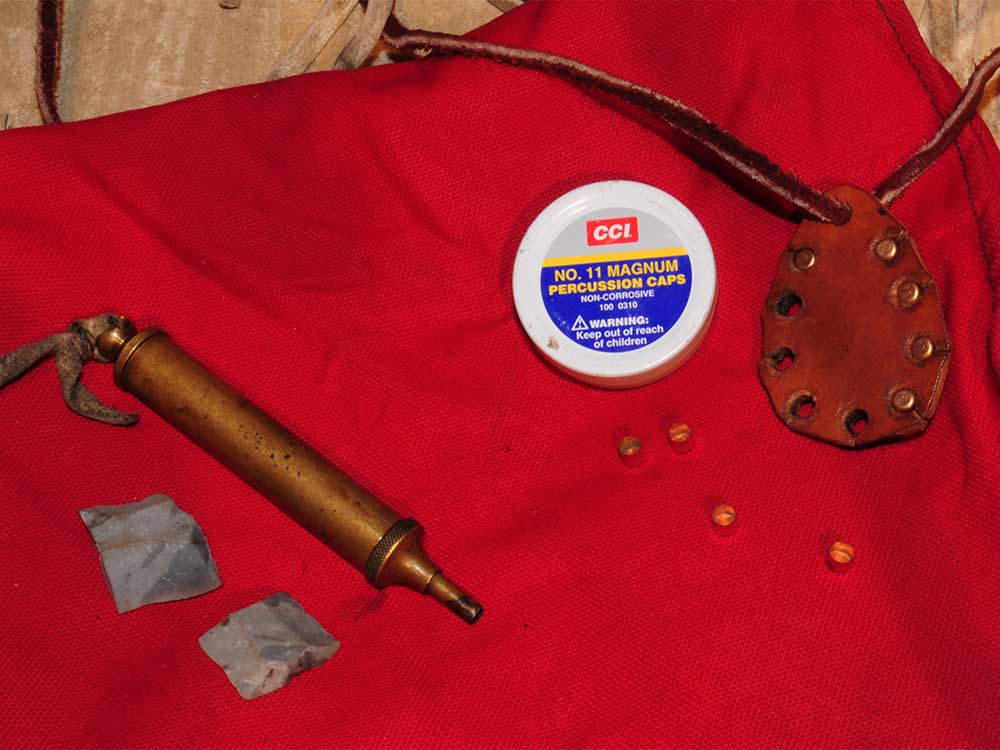 The primer—that itty-bitty cap, or dash of priming powder—is the thing that initiates the whole burn-the-powder-shoot-the-bullet-out-the-barrel process. In other words, it’s important. Most caplocks use number 11 caps. They usually come in little 100-count tins, and are simple and reliable unless you get them wet. They fit snugly over a nipple at the breech of your rifle and, when the hammer falls, detonate and flash into the powder charge. You can make a simple cap holder by punching cap-sized holes around a tear-drop shaped piece of thick leather, then cutting from the hole to the edge. Leave one hole at the top of the teardrop uncut and run a neck-string through it.

Flintlocks are cooler, but also more complex and challenging. You’ll need a good sharp flint locked in your hammer’s jaws, plus a couple spare flints in your tool kit. You’ll also need priming powder in a tiny horn or flask. FFFFg (four F) black powder is ideal for priming unless it’s raining or really damp—then use FFFg. To prime your flintlock, set your hammer to half-cock, open the frizzen (the pan lid and striker surface), and put just a dash of powder in your flintlock’s pan—about half full. Close the frizzen, and you’re primed. When you’re ready to shoot, just ear the hammer back and let fly. A delightful spurt of fire and smoke from the pan will precede the bang by a millisecond. 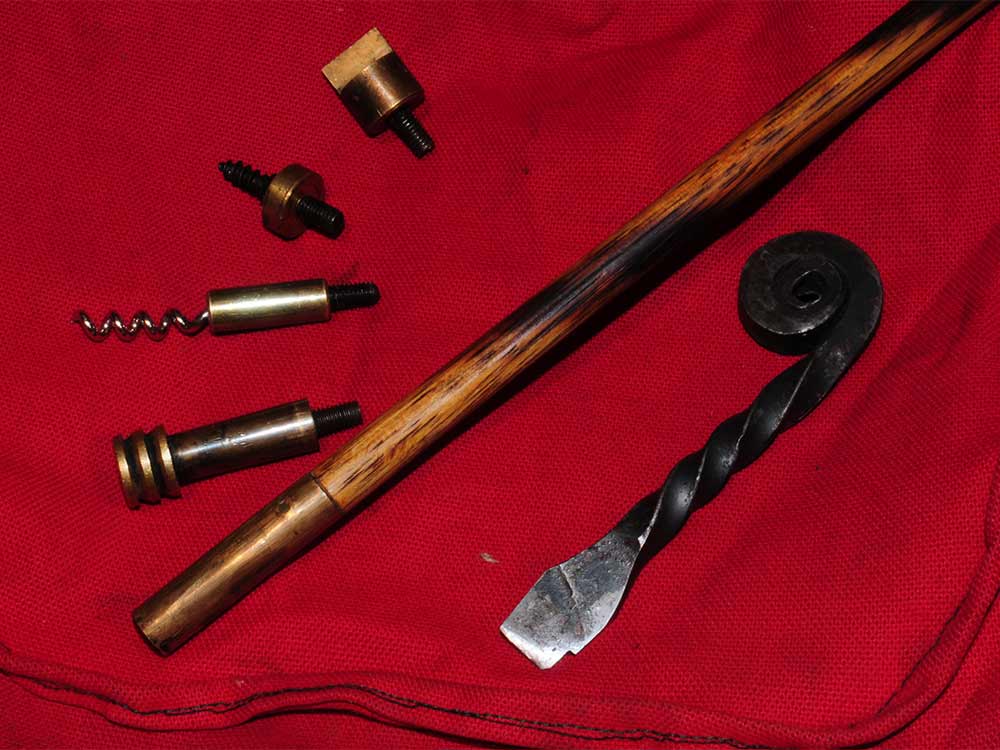 Necessary items for your tool kit.

You’ll need a tool kit set up for your rifle. Here’s what to put in it: 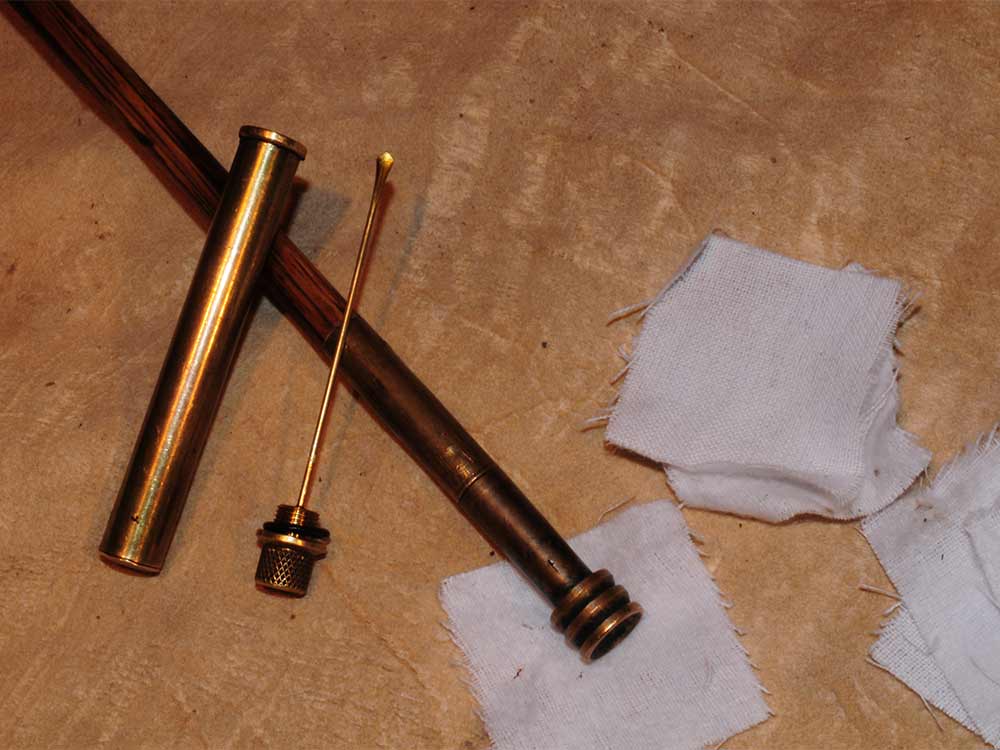 Black powder residue is super corrosive, and you need to get it out of your gun as soon as you are done shooting. It comes out pretty easy when fresh, but if your rifle sits for a few hours, it’s as tenacious as a mad mother in law. Clean your rifle with very hot water by pouring the bore full, let sit a minute, then scrub away. Use your fouling scraper to scrape the breech. Repeat until patches come out clean. Use hot water and a toothbrush on the lock and outside breech area. Dry thoroughly, then oil the bore and everything else well. Thick cleaning patches, a toothbrush, a small cloth, and a small flask of gun oil are all you really need. 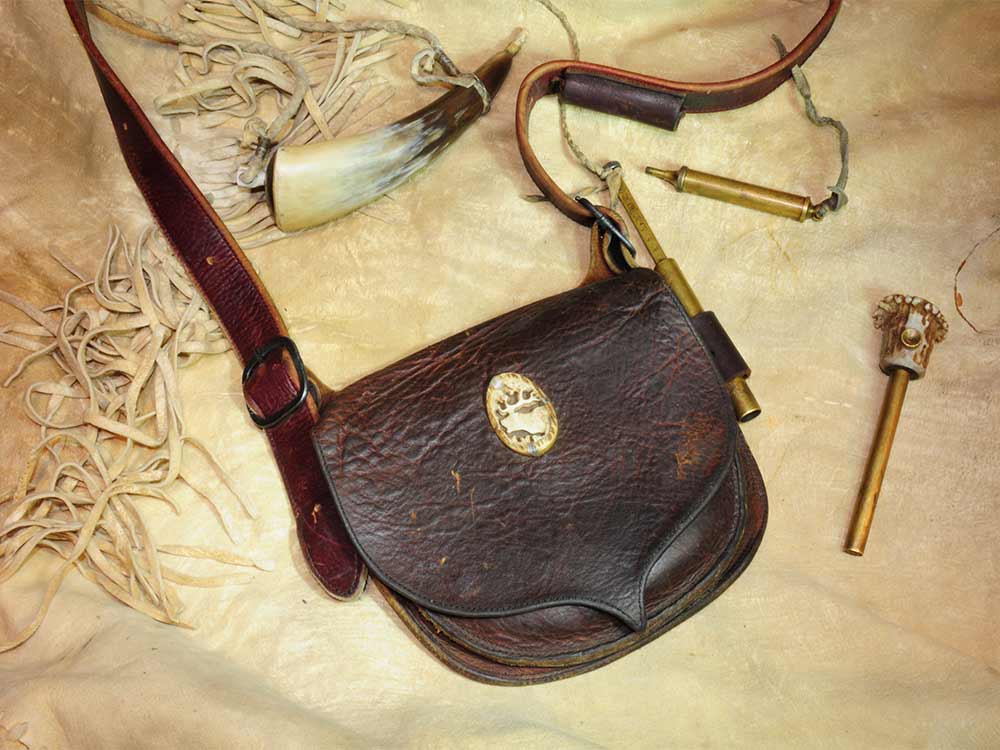 The shooting bag is where your extra bullets, patches, flints, powder measure, priming, tool kit, short starter, and cleaning supplies reside. You can buy one or make your own. It should have a sturdy leather or woven carrying strap, several large and small compartments/pockets, and a flap to keep it all covered. I like to hang my powder measure and priming flask (or capper) from the strap where it crosses my chest. Organize your bullets, patches, and short-starter so they are readily accessible inside. Large or small, ornate or simple, your shooting bag and your powderhorn should be your rifle’s constant companions.

For rifles and rifle kits, as well as almost anything else you might need, check out these companies.