Everything You Never Knew About Primers, and the New Technology That’s Revolutionizing Them 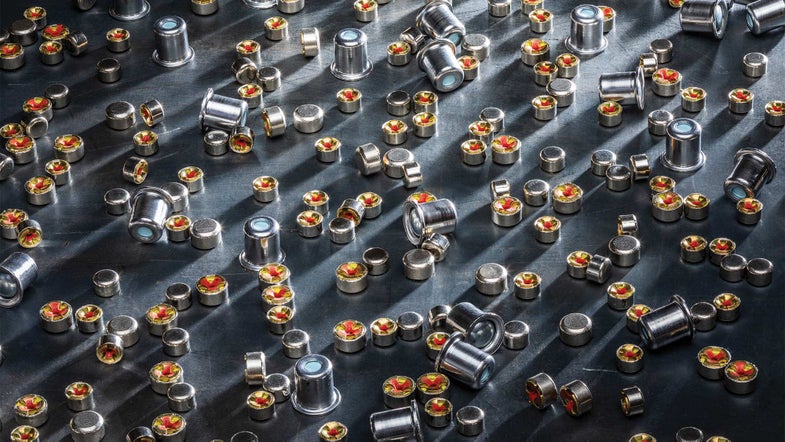 The self-contained metallic cartridge is one the most significant innovations in the history of firearms. It consists of four items—brass, bullet, powder, and primer. Any recent graduate of a hunter-ed program should be able to rattle off this information because illustrations showing the component pieces of cartridges have been a part of the curriculum for decades. What our bright-eyed new hunter might not know is that all four have a profound effect on cartridge performance, whether we’re talking about accuracy, reliability, or lethality. And not to pick on the poor kid, but he or she probably doesn’t have the slightest clue as to what a primer actually does. In this, our young hunter isn’t alone. Of the four building blocks of a cartridge, the primer is the least understood by a long shot. On top of this, a major advance in primer technology promises to make today’s good ammo even better.

Even the nerdiest reloaders—who can make a layperson’s eyes glaze over as they expound ad nauseum about the intricacies of the construction of a favorite bullet or their regimen for preparing brass to exacting standards­—typically know little about the primers they fashion their ammunition with, other than that changing from one type to another might alter the sizes of their groups.

Asked to explain what a primer does, shooters often describe it as akin to a match that lights the powder at the tail end of the cartridge, initiating the process that sends the bullet along its merry way, or to the spark of a spark plug in the cylinder of a motor that ignites the compressed mixture of fuel and air.

Neither analogy is correct. The function of the primer is more complex than either a match lighting a fuse or a spark plug firing.

To understand what primers do, we have to delve into the chemistry that goes into the making of the volatile slurry that is pressed between the primer’s cup and anvil. That mixture, known as primer compound, is the most dangerous substance in the world of firearms and ammunition manufacturing. Though gunpowder is flammable, and the chemicals used to blue steel barrels are nothing you’d want to gargle with, mishandled primer compound will leave nothing but a smoking crater behind. There’s a reason that each individual primer gets its own protective cutout in the box it is shipped in. 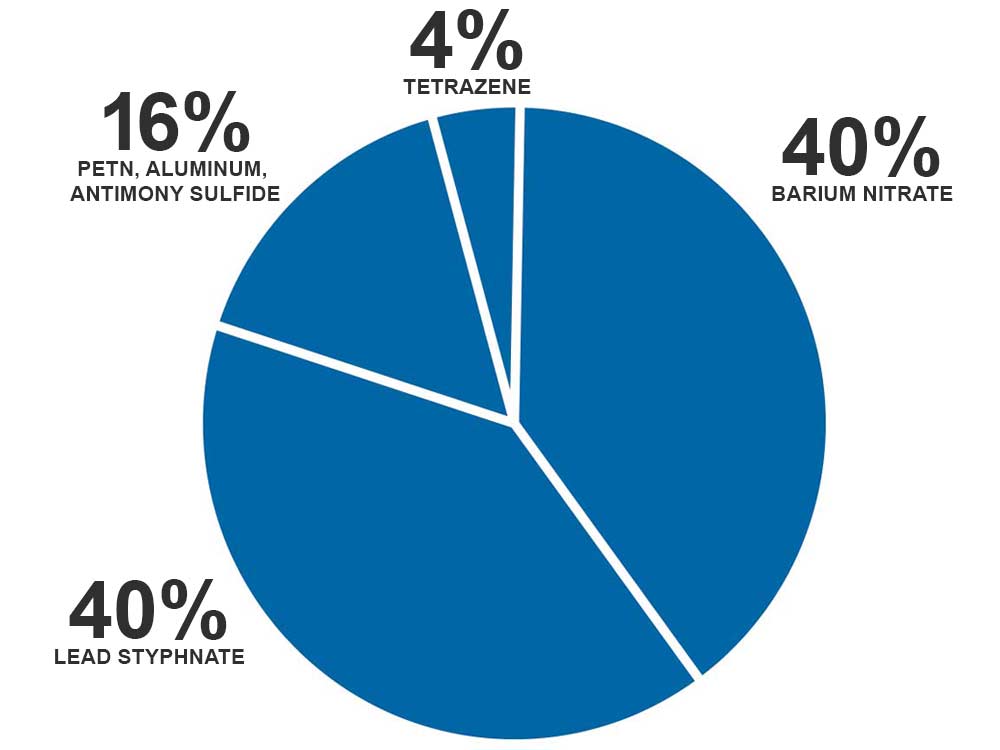 Lead styphnate is the primary explosive in modern primers, while barium nitrate is the oxidizer that adds oxygen to the explosive. Tetrazene is a sensitizer that makes the primer easier to detonate. The remaining elements are fuels.

The specific ingredients in primer compounds vary from one make to another. But the general formulas have remained remarkably stable over the decades, mostly because ammo makers—and, more to the point, their customers—are stubbornly reluctant to tinker with any recipe that deviates from the tried and true.

Above all, primers need to be consistent. If they don’t pop off when they’re hit by a firing pin—no matter how cold the temperature or how dirty and greasy the ignition system—shooters become exceptionally cranky and unforgiving. Igniting the powder charge, even at the cost of other desirable outcomes like accuracy, is the primer’s prime directive.

Despite this conservative bent, primer technology is experiencing a revolution right now. While there’s been plenty of hoopla recently about the newest high-performance bullets, powders, and precision brass, the fourth member of the cartridge quartet has undergone some interesting developments too.

The latest generation of primers has been cooked up by the engineers at Federal Ammunition. The new primer is called Catalyst, and it represents an improvement over traditional primer compounds in several ways.

Before getting to the merits of Catalyst primers, however, we still need to answer the question posed above. What exactly do primers do?

One useful way to think about a primer is as a mini volcano or rocket engine that spews a potent mix of hot, burning slag that mingles with the gunpowder contained within a cartridge. Since the 1920s, this mix has been formulated by combining lead styphnate, the main explosive, with an oxidizer, barium nitrate (which adds oxygen to the flame). These two elements account for about 80 percent of the primer compound. Added to this are some fuels (16 percent) and a dash of tetrazene (4 percent), which is a sensitizer—­meaning it helps the compound ignite when the firing pin strikes the primer cup. 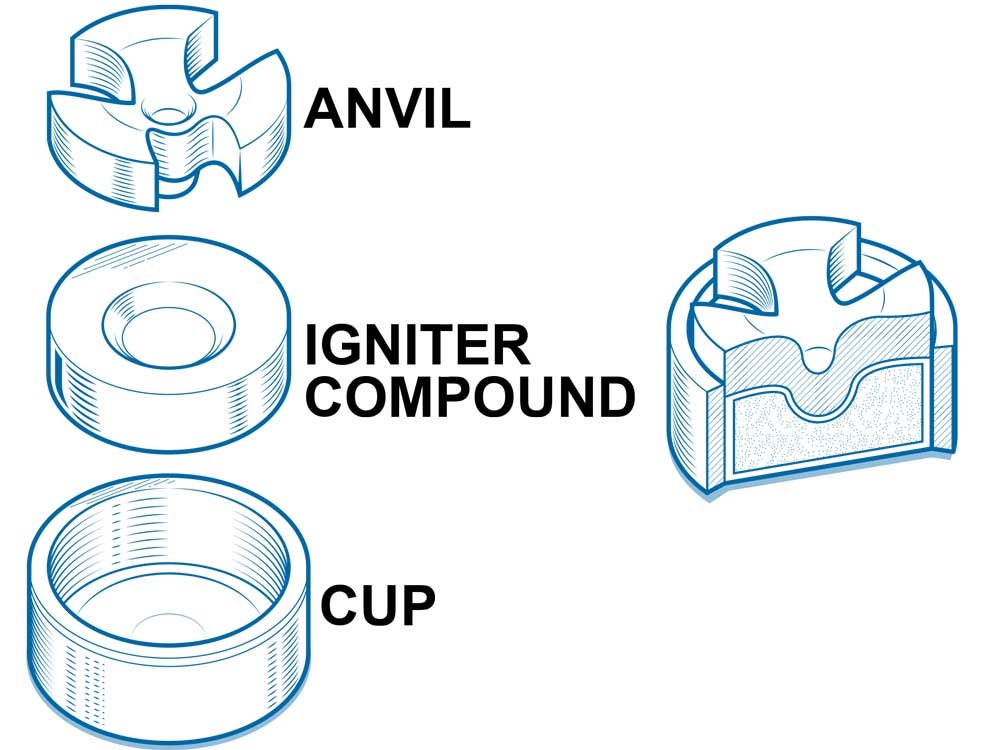 What Goes Into a Primer?

The base is a metal cup that gets dented when it’s hit by the firing pin. This causes the anvil to pinch the primer compound, creating the friction that ignites the compound, which in turn ignites the powder charge.

During this brief eruption, which lasts between 200 and 1,500 microseconds (one microsecond is a millionth of a second), three things happen: The primer compound generates flame and hot particulate matter in the form of slag and burning metal, and it creates a gaseous pressure front.

In a perfect world, the primer would ignite every grain of powder simultaneously to give our ammunition the greatest possible consistency from shot to shot. Also, it wouldn’t create more pressure than necessary, so as not to overly compress the powder in the case, potentially leading to less uniform ignition.

Our world is far from perfect, sad to say, and in order to fulfill the prime directive of primers—­making sure the cartridge fires—we err on the side of using more primer than necessary, meaning more pressure than necessary. Ideally, when the primer erupts, the flame and hot metals penetrate deeply into the column of gunpowder to help get us as close as possible to achieving the chimeric goal of igniting each kernel of powder simultaneously. If the slag is able to spread through the powder, it can transfer its heat to the propellant more effectively.

While some shooters like to use compressed powder charges in their reloads—the idea being that with no air space for the powder to slop around in, they will get more consistent results—this can make the primer’s job more difficult, since the pressure wave coming off the primer can compact the powder column even more, making it hard for the slag and flame to penetrate.

Like many innovations in ammunition, the development of the Catalyst primer was driven by a request from a large customer. In this case, the U.S. government, both military and law enforcement, wanted a duty-worthy primer that didn’t contain lead or other potentially toxic metals. Federal turned the project over to one of its engineers, Joel Sandstrom, who went on to invent Catalyst. 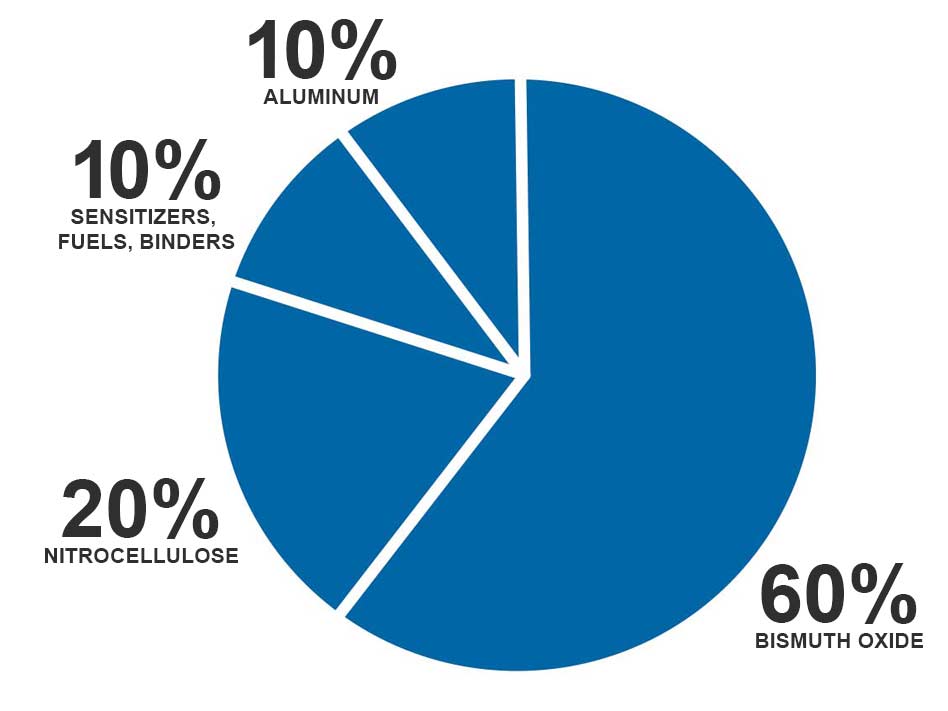 The aluminum performs two main functions. It makes the explosive nitrocellulose more sensitive, and it helps heat up the bismuth. The “oxide” in bismuth oxide adds oxygen to the reaction, while the remaining 10 percent is a blend of fuels, binders, and sensitizers.

There have been other lead-free primers on the market for decades, but they weren’t viewed as reliable enough for duty ammunition and have been relegated to use in training ammo.

While eliminating lead was a primary requirement of the project, Federal ended up creating a primer that wasn’t just the equivalent of the current lead styphnate mixtures, but one the company says is significantly superior to the older technology.

“It is safer to manufacture, and it’s affordable and reliable,” says Drew Goodlin, senior director of technology at Vista Outdoor, the company that owns Federal Ammunition.

One way in which Catalyst improves on current primer technology is that it is more compatible with modern propellants, meaning that it won’t degrade the powder it comes in contact with the way some current primers can. Even better, the Catalyst formula propels more hot, heavy metals, while producing less pressure from gases, into the propellent bed than any other primer system Federal has used—even its vaunted Gold Metal primers.

Though tinkering with existing lines of ammunition that have a long-standing reputation for quality and reliability is generally a no-no—particularly when it comes to primers, which fall under the “if it ain’t broke, don’t you dare mess with it” category—Federal is planning on switching all of its centerfire ammunition—rifle, pistol, and shotgun—to Catalyst primers over the next five years.

This, more than anything, demonstrates the confidence that Federal has in the product. But will consumers be as willing to embrace Catalyst? The fact that various elements of the U.S. government are using ammo with Catalyst lends the new primer tremendous credibility.

Like all primers, Catalyst relies on three main things to work: a fuel source, an oxidizer, and sensitizers. But the chemical reactions within Catalyst primers are markedly different from those with lead styphnate.

The most interesting piece of the Catalyst pie is the aluminum it contains. This accounts for only about 10 percent of the mix, but it performs two different, yet complementary, functions.

When aluminum interacts with any explosive, it makes the explosive more sensitive. With Catalyst, that would be nitrocellulose, which makes up about 20 percent of the primer compound.

The aluminum also reacts with bismuth oxide (60 percent of the primer)—yep, that’s the same bismuth in nontoxic shot with a density similar to lead—to create what Federal engineer Sandstrom calls a “thermite reaction,” which is a fancy way of saying that the aluminum gets the bismuth really, really hot.

Because it is both very hot and very heavy, the bismuth does a superior job of penetrating the propellant bed and transferring heat to ignite the powder. The final 10 percent of the Catalyst formula is a blend of sensitizers, fuels, and binders.

By tweaking this new baseline formula, Federal is able to tailor the primer to work in different types of ammunition, ranging from small pistol calibers like the .380, which use minimal amounts of primer compound, to magnum rifle cartridges and shotshells, which require much heavier payloads of primer material to ignite their powder. The success of Federal’s bet on this new technology hinges on pretty simple criteria: Anytime a shooter loads their gun with Federal ammunition, it needs to go bang, and it needs to place the projectile where the shooter is aiming.

If Catalyst can do that, then we can safely say we’ve entered the next major phase of ammunition technology. And even if our new hunter-ed graduate doesn’t understand all the ins and outs of primers, there’s a good chance they’ll be participating in the new primer revolution when they tag their first deer.

The transition from flint “flash-in-the-pan” to cap primers

1814: Metal Cap
Joseph Shaw put the Forsyth compound into a metal cap, inventing the cap-­nipple system. The latter was later replaced with an ­anvil as part of either the case or the primer.

1848: Mercury Fulminate
The percussion cap had transitioned completely to a mercury fulminate base, allowing for the use of any oxidizer in the compound.

1898: H-48
This potassium-­chlorate-based priming compound was the first successful nonmercuric primer to be adopted by the U.S. military.