Using a Shotgun Suppressor to Quiet Your Gun

A shotgun suppressor isn't elegant, but adding one to your bird gun might be your smartest move. 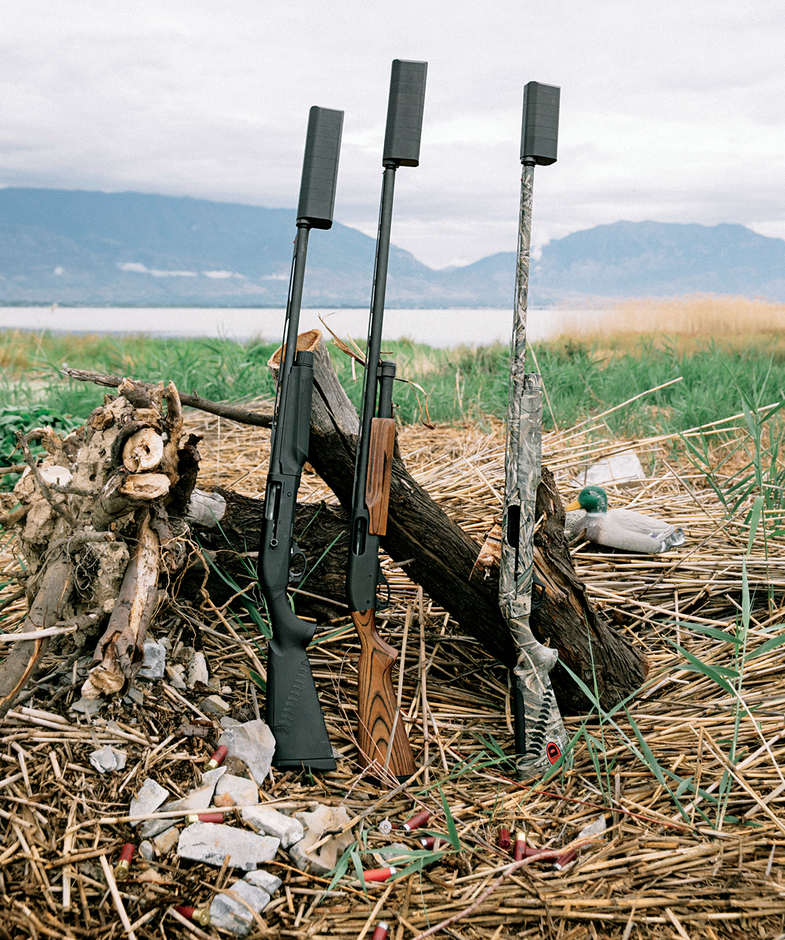 The first time I saw a Salvo shotgun suppressor mounted on the barrel of a shotgun, it reminded me of the rectangular flags that Japanese samurai would wear on their backs as they charged into battle. But that description might be too generous. The fact is that the Salvo is an ungainly looking contraption. And ungainly is not a quality shotgunners appreciate in their scatterguns. Far from it.

Now, there are some shooters who might look at that metal box and think, “Cool.” But I can guarantee you that they are not serious shotgunners. No, serious shotgunners fuss over their guns, adding small bits of weight here and there to make them balance and swing better. They do things like adjust where the triggers sit within the trigger guard to improve ergonomics, and get their stocks tailored to their specific dimensions. Among this crowd, putting a Salvo on a shotgun is as classy as break dancing during a royal wedding.

Which is a pity, because the Salvo shotgun suppressor addresses a real problem that pretty much every hardcore shotgun enthusiast faces: hearing loss. I’ve been in many noisy shooting environments over the years, but few scenarios can match the skull-splitting intensity of a crowded duck blind when fast crossers can cause even the most disciplined waterfowler to over-swing. Getting an earful of magnum-powered muzzle blast will make you see stars.

And even when you’re hunting pheasants in wide-open uplands, the report generated by high-brass 6s can make you or your partner’s ears ring—to say nothing of what it does to the hearing of the dog you just shot over.

So here’s the big question: Can the need to bring a shotgun blast down to a safer decibel level override the negatives, in both performance and aesthetics, that come with attaching a 2-pound hunk of metal to the end of your barrel? 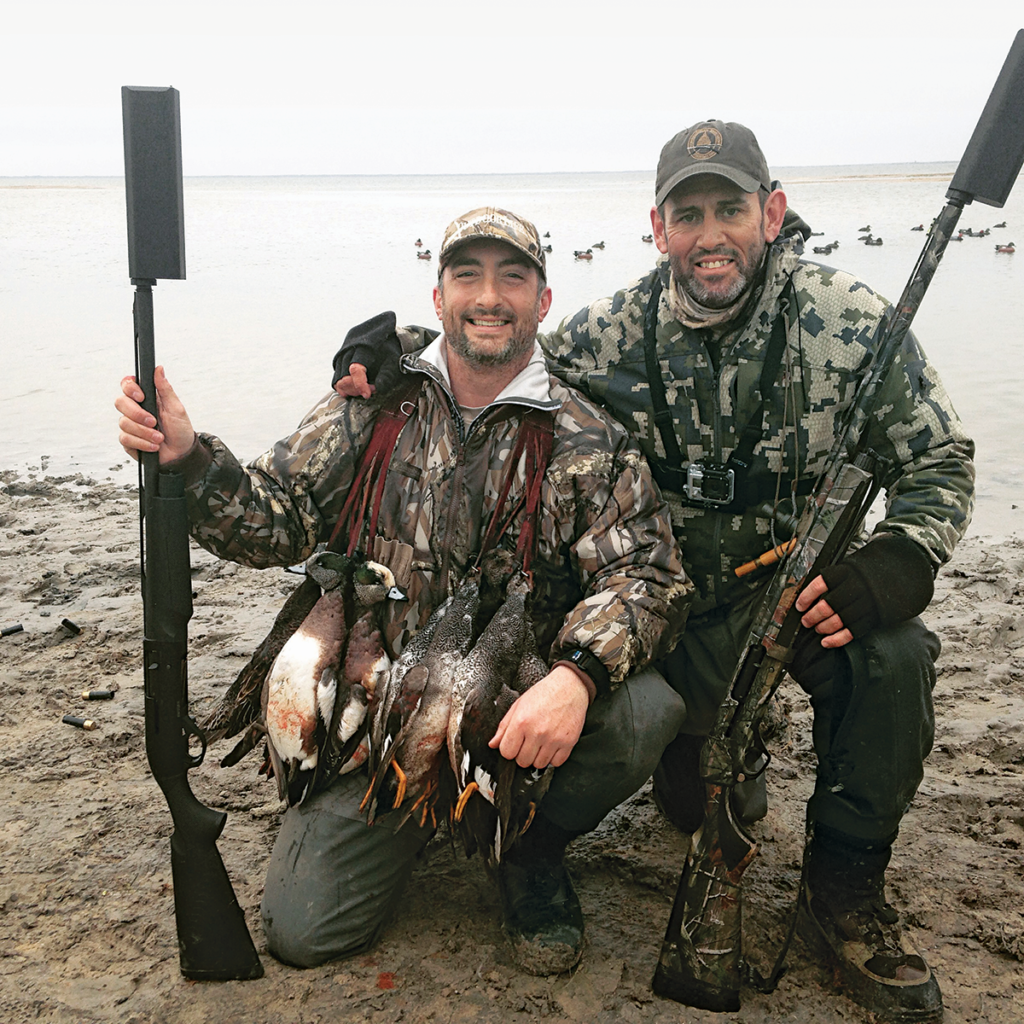 The author (left) and Darren Jones with the day’s bag.

▶ TEXAS BOUND
It’s that question that prompted my trip last winter down to the Gulf Coast in Texas for a cast ‘n’ blast with Darren Jones, one of the executives at Silencerco, the maker of the Salvo and many other types of suppressors. Our plan was to spend three days in Baffin Bay, hunting ducks and casting to speckled trout.

The night we arrived, Darren stepped me through the workings of the Salvo, which has several features that make it unique among firearms suppressors (see illustration opposite). In terms of its base functionality, however, the fact that it is made of stackable baffles that allow the shooter to customize its overall length and weight makes it especially appealing.

Depending on how many baffles are used, the Salvo can be 6, 8, 10, or 12 inches long. Naturally, as the Salvo is made shorter and lighter, its ability to reduce the report of the shot is diminished.

At 12 inches, the Salvo is quiet but unwieldy. It is perfect for turkey hunting, but the swing of the shotgun goes down the tubes with that much weight out there, so I wouldn’t recommend it for targets on the wing. Going to 6 inches, however, didn’t silence the shot as much as I’d like with heavy waterfowl loads.

Beyond a doubt, the sweet spot while hunting ducks was 8 or 10 inches. The thundering bang of our 3-inch magnum shells was reduced to a forceful pop that created a most enjoyable duck hunting experience—one where you don’t have to worry about your buddy blowing out your hearing, and where your ears don’t ring after ripping through three shells in quick succession.

▶ ON THE WATER
Our hunt started agreeably cold and rainy—perfect duck weather. We got to the boat launch in the inky dark and motored out along the bay, picking an exposed point of soft, mucky bank to set up against.

After tossing decoys into the shallow, salty water to create a couple of enticing holes in front of our makeshift blind, we waited on the birds. Whatever concerns I had about how my Benelli M2 was going to handle with the Salvo attached vanished when the first ducks buzzed the spread. Darren and I popped out of our chairs and cut a couple of birds out of the sky.

Truth is, I barely noticed the suppressor during the hunt. The Salvo made the shotgun muzzle heavy, for sure, but it didn’t hamper my swing or my ability to connect. Even with the fastest crossers, or when quickly transitioning from one bird to the next to get a double, the gun and silencer performed just fine.

The next couple of days reinforced these impressions. The duck numbers never reached epic levels—we had to make the most of the gadwalls and wigeon that came to the dekes. With the pressure on to make each shot count, it would have been frustrating to feel hampered by my gun, but that wasn’t the case.

Going with a shorter barrel is a good way to offset the weight of the Salvo.

▶ MULTI USE
A big part of bird hunting is choosing the right type of choke for your quarry. The Salvo actually threads into a shotgun’s muzzle with an adapter, joining the barrel to the can. These adapters, which are specific to the make of the shotgun, come with different degrees of choke, so that the shot pattern can be refined to meet the shooter’s needs. By purchasing different adapters, a single Salvo can be used on multiple shotguns.

The system isn’t cheap—it runs about $1,400, not counting the $200 tax stamp that silencers require. And while the skinflints among us will balk at spending that type of money on an optional accessory, it’s worth it to at least weigh that against the value you put on your hearing. In that light, the price doesn’t seem so crazy.

Regardless, I’m convinced that suppressed firearms of all stripes are something that even the most traditional shooters will embrace with growing enthusiasm. Suppressors aren’t just a trend—at some point, they will graduate from an option to something we should expect and demand. For that reason alone, Silencerco is to be congratulated for giving us the best commercially available shotgun suppressor to date.

1. Baffles: These are what lower the noise levels. The gasses that produce the muzzle blast swirl around in the chambers, allowing the energy that would normally be expressed as sound to be converted to heat. The stacking design allows for easy cleaning.

2. Connecting Rods: Forming the backbone of the Salvo, these rods thread through the baffles and link them together. Different-length rods are available to change the Salvo into the 6-, 8-, 10-, and 12-inch configurations. The Salvo ships with the 12-inch rod kit. Additional kits are $50 each.

3. Guide Rods: These solve one big issue encountered when suppressing a shotgun. Getting the shot wad to pass through the baffles without being torn to pieces is impossible with conventional suppressors. These rods guide the wad safely out the end of the suppressor while leaving plenty of room for the gasses to expand in the baffle chambers.

4. Asymmetrical Shape: One of Silencerco’s best-known offerings is its Osprey suppressor, which is shaped so that it doesn’t obstruct the sights on a pistol. The Salvo does this as well. By keeping the bulk of the suppressor beneath the barrel, the shooter is able to have an unobstructed line of sight when swinging on a target.