Presidents’ Guns: Firearms and the Commander-In-Chief

After President Obama told The New Republic that he skeet shoots “all the time” at Camp David the mainstream media... 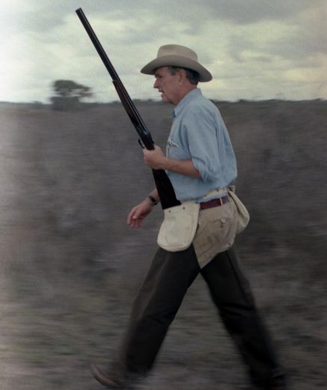 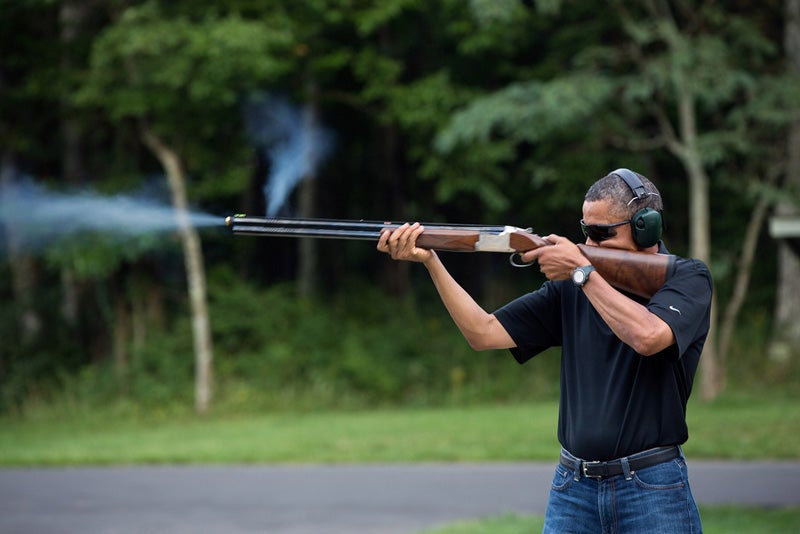 After President Obama told The New Republic that he skeet shoots “all the time” at Camp David the mainstream media collectively gasped “Yeah right!” The Washington Post Fact Check blog even mockingly posted pictures of the Commander-in-Chief with, perhaps, a more familiar sidearm: a squirt gun. The White House responded with this August 2012 photo of Obama shooting skeet, which has created more controversy in its own right. Here at Outdoor Life we’re staying above the fray by looking backwards – at the modern history of presidents with guns. 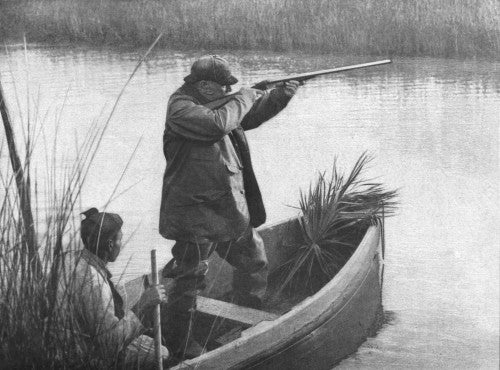 Grover Cleveland hunting ducks in 1907 on the Chesapeake Bay.

Grover Cleveland, the only man to serve two nonconsecutive terms as president – No. 22 and 24 – spent more time hunting and fishing while in office than any other president. The day’s media lampooned him for it, but he shrugged it off: “petty forms of persecution … nothing more serious than gnat stings suffered on the banks of a stream,” he said. In his book Fishing and Shooting Sketches, he wrote “as far as my attachment to outdoor sports may be considered a fault, I am … utterly incorrigible and shameless.” His first love was probably bait fishing; his second wingshooting as he can be seen here hunting ducks in 1907 on the Chesapeake Bay. For more on Cleveland the Sportsman, see this 1956 Sports Illustrated article. 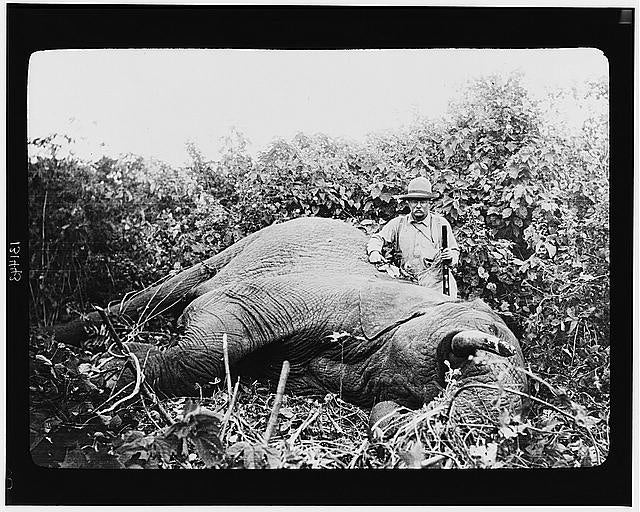 This president needs no introduction. TR was the consummate sportsman/conservationist/hunter. Seen here with an elephant taken on his 1909 Smithsonian-sponsored African safari, he took more head of game on that trip than most hunters shoot over a lifetime. (See the full list here.) For guns, TR packed a Fox No. 12, an army Springfield .30-06, a Winchester 1895 lever action in .405 and a double-barrel Holland in .500-.450, used here on the tusker. 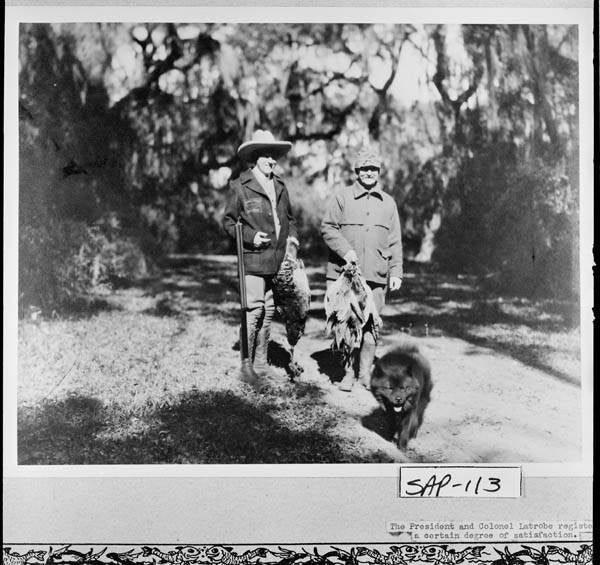 Calvin Coolidge with his double gun on a 1928 Christmas holiday to Sapelo Island, Georgia.

Calvin Coolidge, the 30th President of the United States, was literally born on the Fourth of July, to farmer parents in central Vermont. In the summer of 1927, while The White House was under renovation, he escaped the bugs and heat of DC for a game lodge in South Dakota. The trout fishing hooked him and this wilderness-loving president extended his stay from three weeks to three months. He was a fine wingshot, too, and can be seen here with his double gun on a 1928 Christmas holiday to Sapelo Island, Georgia. Hunting alongside the first lady he killed turkey, pheasant, and quail. 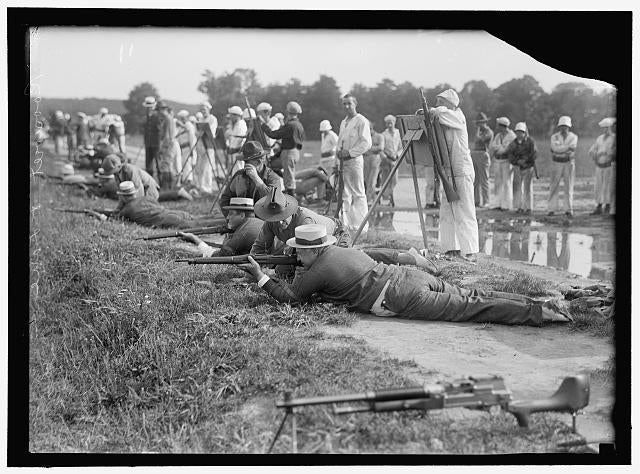 It’s no surprise that Franklin Delano Roosevelt, the president who aggressively led us through World War II, liked to practice with the Marine Corps. FDR was serving as Assistant Secretary of the Navy when this 1917 photo of him shooting on the Corp’s rifle range was taken. Through the Great Depression that would follow, he spearheaded build up of U.S. military might that would be the downfall of Hitler and Imperial Japan. And like other presidents, he liked to hunt. There are pictures floating around of him behind the wheel on a Georgia possum hunt in 1930. 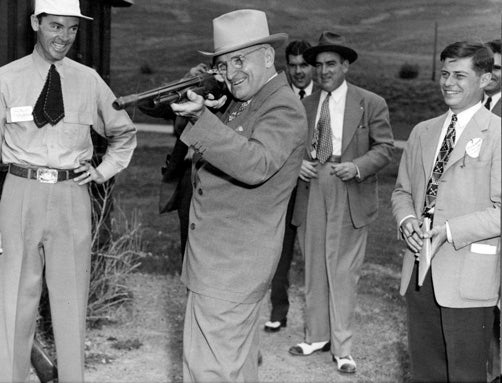 Harry Truman toying with a new pump shotgun while the press looks on. June, 1948

Harry Truman liked his guns, which is no surprise as this farm boy from Missouri wanted nothing more than to serve in the military. Turned down for West Point because of poor eye site, he promptly signed up for the Missouri Army National Guard and went on to World War I as an artillery commander in France. Little did his platoon mates know he’d go on to be commander-in-chief as the 33rd President and preside over the close of World War II. Here he can be seen in calmer days, having a laugh with the press while toying with a new pump shotgun in June, 1948. 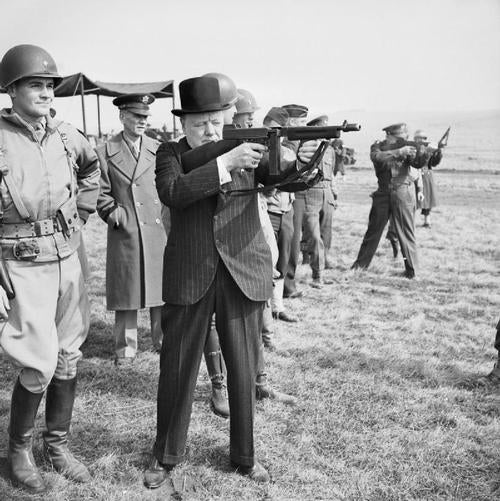 Like FDR and Harry Truman before him, the 34th President Dwight D. Eisenhower was a military man, gun enthusiast and World War II hero. This 5-Star General turned President shot every kind of firearm imaginable, but we’re partial to this 1944 picture of him (in the background there) shooting a Thompson sub-machine gun. That fellow front and center wasn’t an American president, but we sure wish he was. 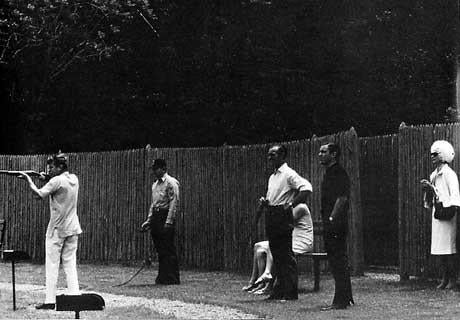 When thinking of JFK and guns, you’d be forgiven if the 6.5 mm Carcano Model 91/38 was the first thing that came to mind. But before the 35th President’s life was cut terribly short, he did relax with family and firearms at Camp David, as can be seen in this undated video. Obama, apparently, wasn’t the first commander-in-chief to bust clays at the Presidential retreat.

Gerald Ford receiving a musket as a gift during a 1976 trip to Texas.

President Gerald Ford, No. 38, was perhaps most firearm famous for asking Congress to ban “Saturday Night Specials” – slang for cheap, compact handguns that captured media attention in the 70s. Ford differentiated the SNSs from other handguns as those “that hadn’t been designed for sporting purposes.” That sounds a little foggy to us.

However, he did oppose federal registration and licensing of gun owners, something we hope current and future presidents hold to. Ford received this musket as a gift during a 1976 trip to Texas. 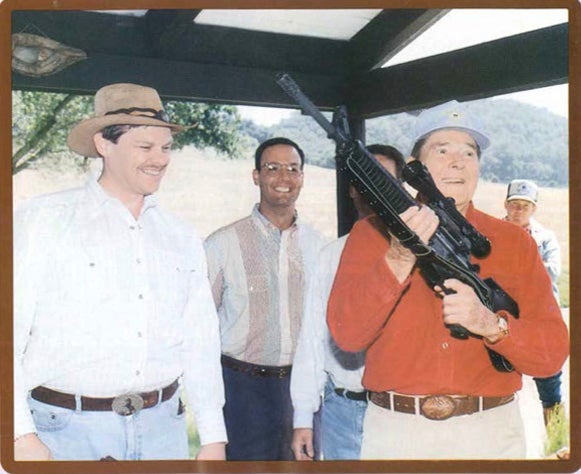 No. 40, President Ronald Reagan, accepted this Colt Sporter AR-15 from the American Shooting Sports Council at his California ranch in 1992. “He believes in our industry, he believes in our products, and he shares our views about individual responsibility, accountability and personal freedom,” the foundation’s executive director later wrote about the meeting. But Reagan’s history with gun control is a little more complicated. As a president, he signed into law the Firearms Owners Protection Act, considered a victory for supporters of the Second Amendment. But after leaving office he voiced support for the Brady Bill and Clinton’s “assault weapons ban” in newspaper editorials. 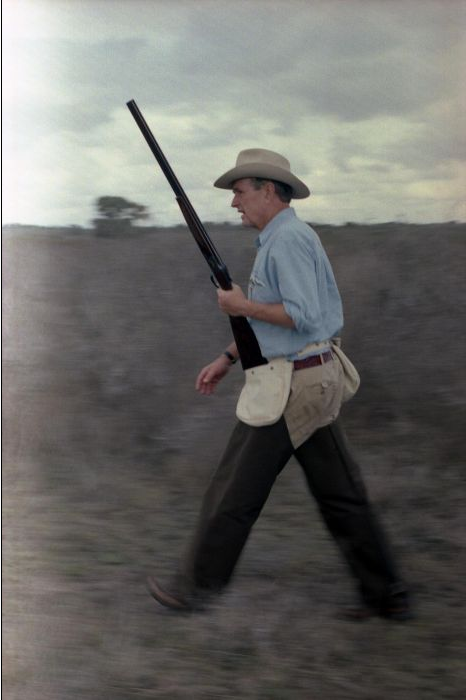 Fighter pilot, C.I.A. director and lifelong upland bird hunter, No. 41, George H. W. Bush is a bonafide shooter – seen here hunting the Lazy F Ranch in Beeville, Texas in 1992. He wrapped up this campaign trip with a Chamber of Commerce barbeque and evening at the local bar. Media swarmed over the day and reported the soon-to-be former President drank exactly one mug of beer. 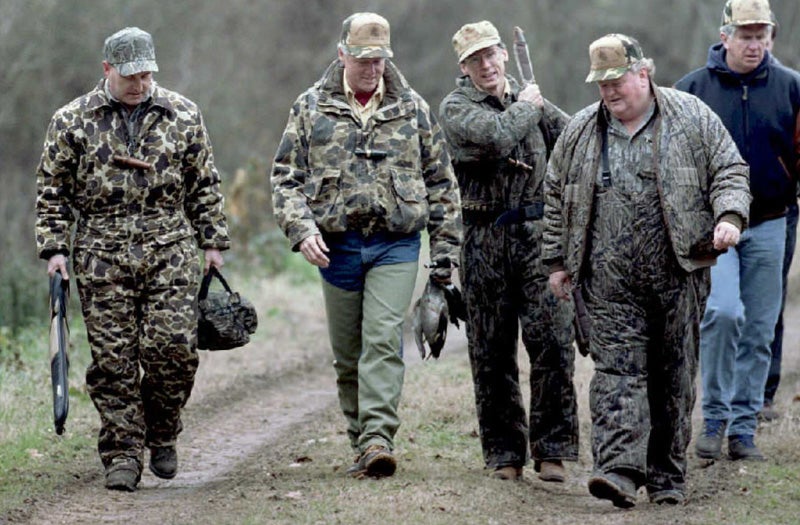 Bill Clinton during his 1992 campaign.

During that same campaign, the former Governor of Arkansas, Slick Willy Clinton, visited his state’s fabled duck grounds for some sportsman-centered PR. No reporters were allowed in the duck blind, and no photos of Clinton holding a shotgun ever circulated. (No surprise considering his voting base at the time.) He did, however, pose with a few ducks he supposedly shot. As the 42nd President, Bill Clinton, famously passed the Federal Assault Weapons Ban. Arkansas or not, he proved no friend of John Q. Duckhunter. 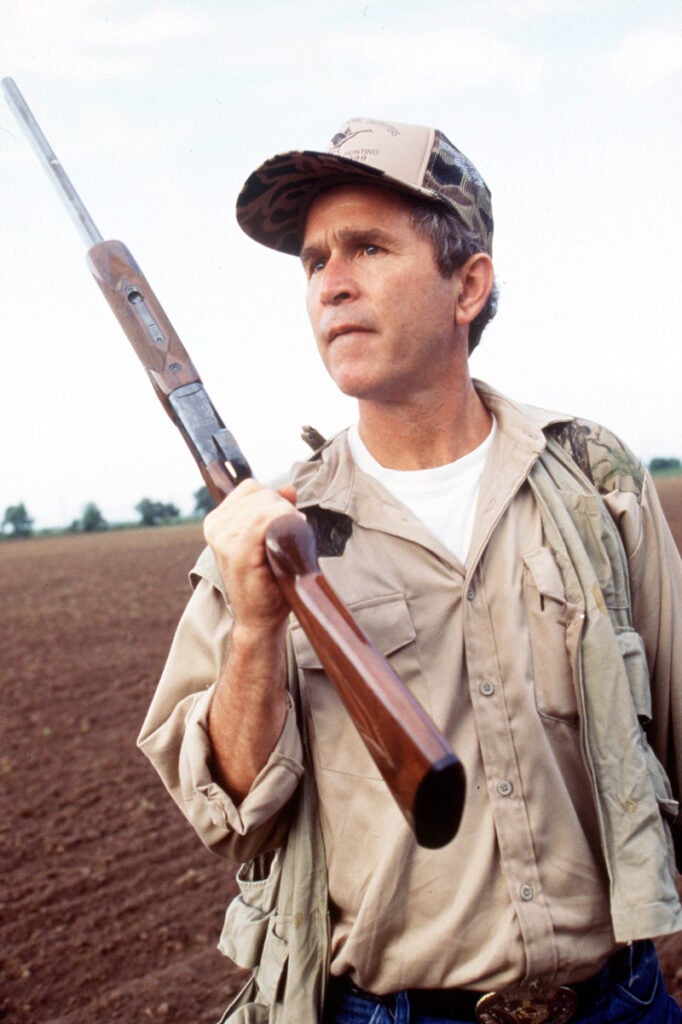 No. 43, George W. Bush, let Clinton-era gun bans expire and quickly became the poster boy President for Second Amendment advocates. And rightly so. As seen on this Texas dove hunt, W. always looked a whole lot more comfortable behind a shotgun than he ever did in a Washington press conference. Can’t say we blame him.