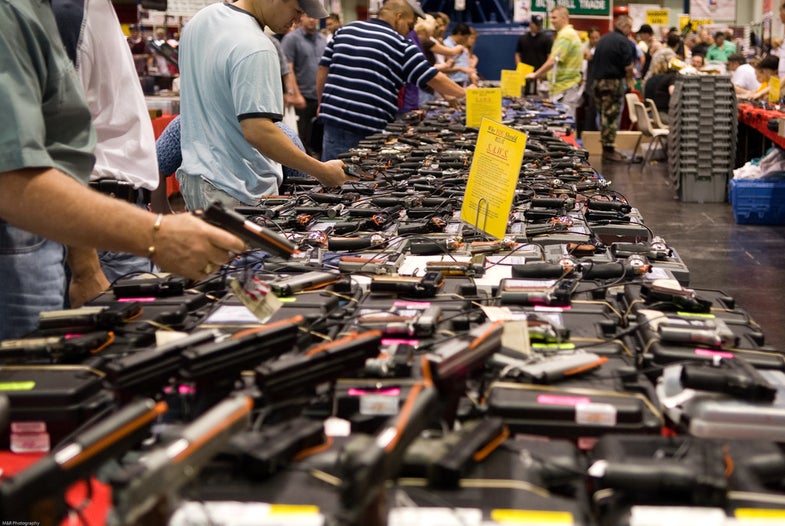 A table of firearms at a gun show in Houston, Texas. Wiki Commons
SHARE

The U.S. House of Representatives will soon consider the Veterans Second Amendment Protection Act, which would prohibit the Department of Veterans Affairs from submitting the names of 174,000 veterans arbitrarily deemed “mentally incompetent” without a judicial ruling to the National Instant Criminal Background Checks System (NICS).

The bill, HR 1181, is sponsored by Rep. Phil Roe (R-Tenn.), chairman of the House Committee on Veterans Affairs, was introduced in February and is expected to be approved by the House as soon as March 17.

If also adopted by the Senate and signed into law by President Donald Trump, the FBI will be forced to retroactively delete the records veterans who are deemed “mentally unable” to manage their finances and blocked by the NICS from purchasing firearms.

A chief criticism of the system and blacklisting, according to the National Rifle Association, is that once a veteran is deemed “mentally incompetent,” there is little recourse to challenge the ruling or eventually have it reversed. The VA maintains its has a due-process procedure in which a veteran can submit new evidence to challenge the incompetency determination. The NRA argues few affected individuals have the means to fund expensive mental health evaluations and legal aid.

According to the NRA, as of April 2015, only 3% of relief petitions had been granted by the VA. “And the decision makers considering the petitions are the same sorts of VA bureaucrats who made the original fiduciary determination, not an independent judge or magistrate,” the NRA notes in a Call-To-Action alert.

Roe’s Veterans Second Amendment Protection Act has five co-sponsors. In a press release, he said the VA’s longtime practice “arbitrarily” denies some veterans their right of self-protection. Only veterans designated as a danger to themselves or others should be blocked from purchasing guns, he said.

Most Democrats disagree. Rep. Elizabeth Esty (D-Conn.), also a member of the House Veterans Affairs Committee, called HB 1181 a “hastily crafted, overbroad bill.” She introduced an amendment calling for a study to examine information-sharing practices between the VA and NICS. It was voted down by the committee.

Fourteen retired admirals and generals — including General David Petraeus, a former CIA director, Admiral Thad Allen and Generals Michael Hayden and Stanley McChrystal — sent a letter to Congress stating some “metal incompetent” veterans on the VA list are suicide risks. According to the Department of Defense’s 2014 Suicide Event Report, an average of 20 veterans commit suicide each day, two-thirds by using a firearm.

— Your Help Urgently Needed to Protect the Second Amendment Rights of America’s Veterans!

The manufacture, distribution and sale of sporting firearms, ammunition and supplies contributed about $51.3 billion in total economic activity to the United States’ economy in 2016, according to the National Shooting Sports Foundation’s Firearms and Ammunition Industry Economic Impact Report 2017.

According to the NSSF’s annual report, the industry employs as many as 141,500 Americans and generates an additional 159,623 jobs in supplier and ancillary industries, including an additional 30,000 new jobs over the past three years. And these are good-paying jobs with an average annual salary of $50,423 in wages and benefits, the NSSF maintains.

The firearms industry and its employees paid more than $7.4 billion in federal and state taxes including property, income and sales-based levies, the report documents.

“The economic growth America’s firearms and ammunition industry has experienced over the years has been nothing short of remarkable,” the NSSF stated. “Over the past couple of years, the industry’s growth has been driven by an unprecedented number of Americans choosing to exercise their fundamental right to keep and bear arms and purchase a firearm and ammunition.”

The NSSF insists that broader economic impact flows throughout the economy, “generating business for firms seemingly unrelated to firearms,” such as in banking, retail, accounting, metal working, even in printing, all depend on the firearms and ammunition industry for their livelihood.

In addition, the financial and credit report site WalletHub has released a state-by-state outline of the industry’s economic impact in its “2017 States Most Dependent on the Gun Industry” report.

— 2017’s States Most Dependent on the Gun Industry

The New Mexico House Judiciary Committee on March 13 ditched a Democrat-sponsored “dummy bull” that would have imposed a near-universal ban on private firearms sales, prompting 32 of New Mexico’s 33 sheriffs to warn that the measure — sponsored by the former New York Mayor Michael Bloomberg’s front group Everytown For Gun Safety — was, essentially, a gun registry.

The committee’s decision to quash the bill means it is dead for this year’s legislative session. Introduced as HB 50 by Rep. Stephanie Garcia Richard (D-Los Alamos), the bill failed in a 7-6 Judiciary Committee vote on Feb. 10. Richard reintroduced the measure as HB 548 — otherwise known as a “dummy bill” — but withdrew it on March 13 without formal consideration after the NRA and other gun rights advocacy groups alerted constituents of Richard’s legislative chicanery.

Breitbart News’s AWR Hawkins wrote that Richard’s proposed universal background check mandate is, essentially, a gun registry. “In fact, a registry is necessary for the checks to work, whether the checks are federal- or state-level, because a government has to know where every gun is if it wants to know whether a gun is changing hands in a private sale,” he writes. “Those keeping score at home have witnessed the insidious nature of universal background checks in California, where firearm registration and gun confiscation laws have complemented such checks.

“Shall Issue” Shall Continue in Hawaii

Four years, nine months and 11 days after Christopher Baker appealed the denial of his request for a preliminary injunction against Hawaii’s “shall issue” requirement that concealed applicants show an “exceptional” reason to justify carrying a firearm, the 9th Circuit Court of Appeals has remanded the case back to the district court where it all began in 2013.

The three-judge panel’s unpublished ruling in Baker v. Kealoha issued on March 9 is, essentially, a do-over. Such a deferment could have been interpreted as hopeful before last June when the same 9th Circuit Court — in fact, the same three-judge panel — issued its ruling in Peruta v. San Diego County, upholding “shall issue” in a determination that, “There is no Second Amendment right for members of the general public to carry concealed firearms in public.”

Both cases could be destined for the U.S. Supreme Court.

Essentially, the ruling means “shall issue” remains the status quo in Hawaii.

Christopher Baker, a former Honolulu resident, was denied a concealed carry permit by the Honolulu Police Chief Louis Kealoha without reason or explanation. Baker sued Kealoha for violating his Second Amendment rights. His case was denied in district court and then appealed to the 9th U.S. Circuit.

Hawaii has some of the nation’s strictest concealed carry laws. In 2012, according to the Honolulu Star, four Honolulu residents and one Maui resident applied for a concealed carry licenses and all five were denied. On the island of Hawaii, Hawaii County Police Department Chief Harry Kubojiri has denied all 66 applications since 2006. Since 2009, 12 appeals were pursued, none was successful.

— Another Second Amendment Appeal Shot-Down by the 9th Circuit

— New York AG: No Second Amendment Right to a Taser