The 7 Best Shotguns for Young Hunters 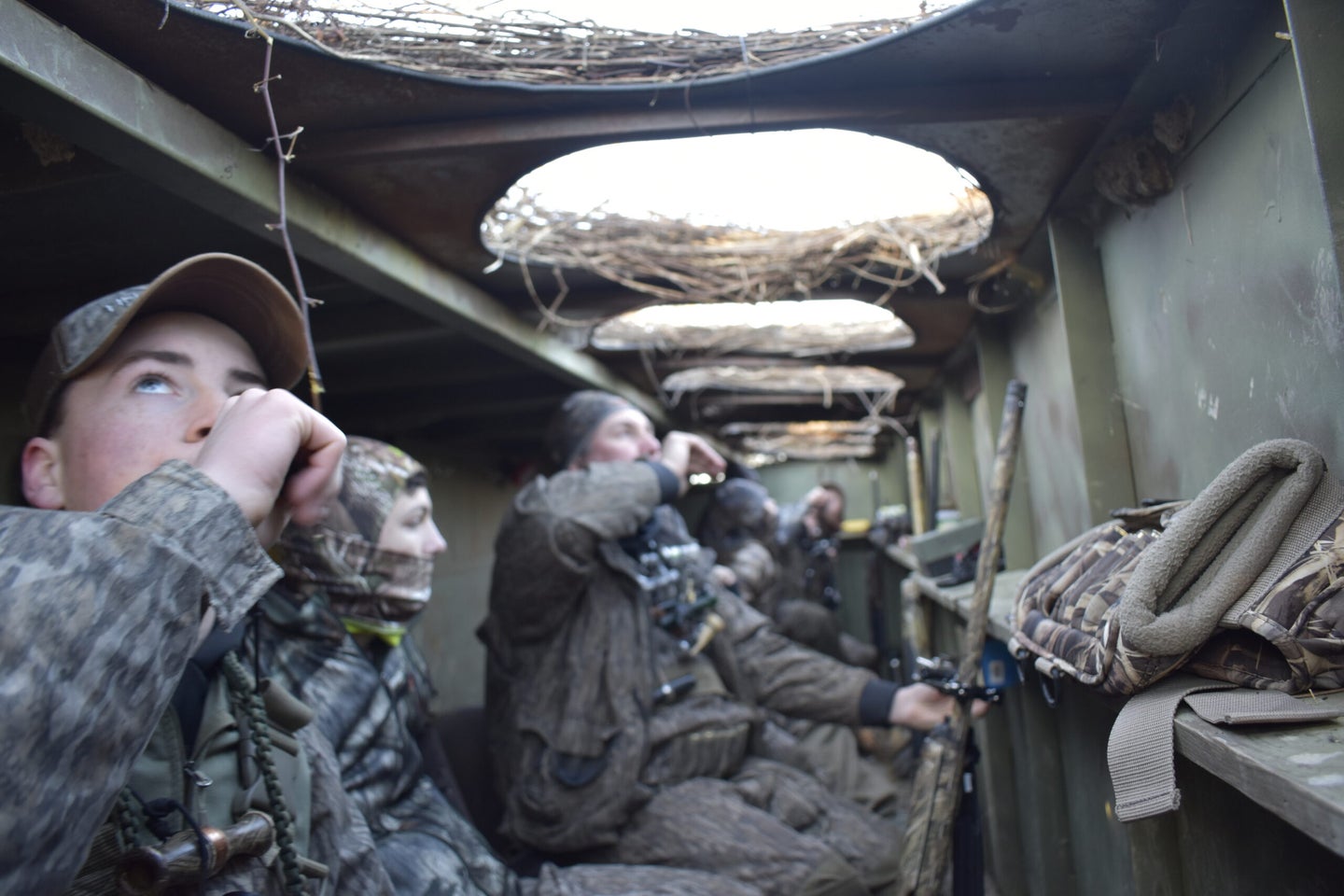 Getting your kid the right shotgun is paramount to the start of their hunting career. Joe Genzel
SHARE

Growing up in Ohio, most of my friends received a single-shot 20-gauge as their first shotgun. Single-shots were deemed safer for kids (they are certainly less complicated to operate than auto-loaders or pumps). Most came with shorter stocks, and were shorter in overall length, so they fit young hunters better. Single-shots were relatively inexpensive guns (and still are), so it was an easier point of entry for parents trying to raise a family on a modest income. The problem with many of those guns was they were built with rock-hard plastic recoil plates. Loaded with magnum slugs (one of the only options for hunting deer in Ohio at the time) the recoil from those guns punched your shoulder harder than any playground bully. It was an ideal scenario to develop bad habits, like flinching. In some cases the recoil could be so brutal that a new hunter might give up altogether.

As a survivor of the single-shot slug gun days, and with kids of my own now that I hope to teach to shoot, I know there are better options for today’s youth. Here’s a look at some of the best shotguns for young hunters. —Brad Fitzpatrick

The CZ Redhead Reduced Length comes with 24-inch barrels, a 13-inch length of pull, and weighs just 6 pounds, which makes it well-proportioned for young hunters. There are a long list of premium features, including five screw-in choke tubes, auto ejectors, a silver satin chrome receiver, gloss black chrome-lined barrels, Turkish walnut stock, and single mechanical trigger that can be set to fire either barrel first. The Redhead has an MSRP under $1,000, which is a good value for an over/under. It’s tough to find a reliable O/U for any size shooter that’s this moderately priced. This gun is suitable for youth clay competitions and it’s also an excellent field gun, plus you can take it into the grouse woods while your son or daughter is at school. —BF

Franchi’s Affinity 3 Compact is an inertia-driven semi-auto shotgun that is reliable and well-built. It offers a big advantage over other inertia guns: a return spring located in the forearm instead of the stock. This means as your child grows, you can swap out the compact stock for a full-sized one in a matter of minutes (instead of buying a brand new gun). Inertia guns are typically lighter than gas semi-autos (this one weighs 5.9 pounds), but they do have more felt recoil. To mitigate that, the Affinity’s TSA recoil pad does an effective job of softening the blow once your young hunter pulls the trigger. Chambered for 3-inch shotshells, the Compact comes in 20-gauge with a 24- or 26-inch barrel. It has a 12 3/8-inch length of pull, and there are also ¼-inch spacers included so you can tune the fit for the shooter. —BF

This gun costs more than $2,000, so it’s not likely to be your kid’s first gun, but I wanted to list it as an option, because it’s a good choice if you have a young shooter that competes in skeet, trap, or sporting clays. Browning has a growth Insurance program that allows Citori owners to purchase a full-length stock for half price up to five years after of the purchase of the Micro. So, that allows your son or daughter to compete (and hunt) with the same gun their entire life. The Citori, which replaced the iconic Superposed, is an exceptional field gun. It’s proven reliable and can compete with over/unders priced much higher. They also hold their value, so you won’t be out the entire $2,000 should your child ever fall out of love with shooting. These guns come with several standard features, including three Midas Grade extended choke tubes (IC, M, and F), Browning’s Triple Trigger System, which allows you to swap out different trigger shoes and adjust the length of reach, a high-polish blued steel receiver, front and mid barrel beads, Vector Pro lengthened forcing cones for better patterns, and a grade II/III gloss walnut stock. The 12-gauge model weighs 7½ pounds, so take that into account before buying. The 20-gauge is a full pound lighter. Both models have the option for 24- or 26-inch barrels, and are chambered for 3-inch loads. Length of pull is also 13 inches on both the 12 and 20, and there is an Inflex recoil pad built into the stock. —BF

Winchester’s Super X line of shotguns meshes quality with affordability better than any other shotgun manufacturer that is building gas-operated shotguns. The SX4 Compact relies on the Active Valve gas system, shared by the Browning Silver shotguns. AV operates on a piston that vents excess gas away from the shooter and tames recoil. Easy to clean and reliable, the Compact has a 13-inch LOP, is chambered for 3-inch shotshells, and available in 12- or 20-gauge. The 20 only weighs 6.4 pounds, which would be a little concerning if this was an inertia gun because of the recoil it would generate. But since it’s a gas gun with an Inflex recoil pad at the end of the stock, that won’t be an issue. There are also 24-, 26-, and 28-inch barrel lengths available in both gauges. —BF

A 28 is my favorite gauge for young shooters. There are 28-gauge shotshell offerings with the same charge weight as 20-gauge options, so you can get the same pattern density from a 28 that you can from a 20, but the 28 is typically a lighter gun. That makes it easier for your kid to carry. Through extensive testing, former Field & Stream shooting editor Bob Brister found that the 28 produces a shorter shot string, which delivers more pellets to the target at the same time. That adds up to cleaner kills, and a better experience afield for your young hunter. The SA-28 is a 5.5-pound gas-operated auto-loader, equipped with a 24-inch barrel and has a 12.5-inch LOP. Its overall length of 40.75 inches makes it manageable for smaller shooters to handle. Recoil is extremely tame, especially shooting 7/8- or ¾-ounce loads. And at $624, the price is right. —BF

You can’t have a best youth shotguns list without including the best-selling pump of all-time. So many kids grow up shooting 870 20 gauges because they are equally reliable and affordable. Just stay away from any Express model that was built between 2010 to 2019 if you decide to buy a used one. The manufacturing fell off as Remington entered bankruptcy and was sold off in blocks. A new company—RemArms—is building them now, and the guns are much better for it. Hogue makes a 12-inch youth stock for the 870, which you can swap with the standard stock. As your young shooter grows, you can put the old stock back on and shim it appropriately for the best fit possible. There is also a compact model of the Express that has an overall length of just 40.5 inches. But, it’s a harder gun to find on the used market, and even more difficult to buy new. There are a bevy of used and new 870 slug barrels on the market as well if it turns out your kid loves to deer hunt. The 870 is a 3-inch gun with twin-action bars that make it easy to pump. Short-stroking is a common issue with new shooters and pump shotguns, and it will likely be part of the learning process with this gun. But Remington put a lot of time and effort (more than 70 years) to make the 870 action run as smooth as possible. Plus, you can get a used Express for under $300, a fine price for such a durable and functional shotgun. —Joe Genzel

Read Next: 3 Reasons You Should Consider a Youth Shotgun for Turkey Hunting

One thing a single-shot shotgun will instill in your child is to place their shots carefully, because they only have one shell in the chamber. This little .410 comes with a JEBS X-Full turkey choke and is drilled and tapped for a scope. I’ve seen Anse Brantley, F&S hunting editor Will Brantley’s 7-year-old son, kill squirrels with this gun past 30 yards. He’s also killed a turkey with it. Will put a scope on this gun and it’s a deadly combination for small game and gobblers. It has also given his son a lot of confidence because he has become such an accurate shot, which is key for any young shooter. It’s only on 6-pound gun, and the LOP is adjustable between 13 to 14 inches. The gun is also only 22 inches long (without the choke). I know Will is chomping at the bit for Anse to outgrow the Scout. It makes an awesome old man turkey gun after all. —JG