There’s fast. There’s faster. Then there’s the 6.5-300 Weatherby Magnum. This speed-demon is Weatherby’s first new cartridge in decades, and to showcase the round, the company has built a new rifle to go with it—the ­revamped Mark V Accumark.

Based on a necked-down .300 Weatherby Magnum, the 6.5-300 Weatherby has the profile of a mini ICBM and is now the fastest commercial 6.5mm cartridge available. The round has generated considerable chatter among shooters since it was announced last fall, with equal portions of praise and damnation being heaped upon it—before anybody had a chance to actually shoot it, naturally.

Lost in the initial buzz was any comment on the changes to the Mark V Accumark, which represents the first significant alteration to this iconic long gun since it was introduced back in 1958.

Roy Weatherby made his mark by designing cartridges that were fast and building rifles for them that were accurate and flashy. His rifles had bling and swagger at a time when the round receiver of a Remington 700 was enough to raise eyebrows for its outré design. His Hollywood aesthetic, and sense of showmanship, echoed the hot-rod car culture that also flourished in Southern California in the 1950s.

This new Accumark is a direct descendant of Roy’s early creations. The highly polished stainless-steel barrel and bolt are offset with matte black in the fluting and around the recessed crown in the muzzle.

Its shine and gloss will make some hunters complain that it might alert sharp-eyed game while stalking, but like the cartridge, this rifle is making a statement that it will not be ignored.

As I mentioned, there has also been much grumbling about the cartridge, which is admittedly an over-bored sonofabitch, for being a barrel burner that doesn’t have a “point.” To which I say, get over it. To extend the car metaphor, it’s like a gaggle of Prius owners tsk-tsking muscle car enthusiasts. “Do they have any idea how much fuel they waste?” Go home, Mildred.

You don’t get a rifle that pushes a 127-grain Barnes LRX at 3,531 fps because you’re concerned about barrel life. You get it because you like bullets that haul ass and shoot flat.

And shoot flat it does. Sighted in 2 inches high at 100 yards, the Barnes LRX is dead-on at 294 yards. By the time the bullet has travelled 400 yards, it has dropped only 7.5 inches, is booking along at 2,650 fps, and retains 1,980 foot-pounds of energy. It will take game at extended ranges and will make for an excellent predator round. With monolithic bullets, the 6.5-300 will easily crumple elk, moose, and other large critters. 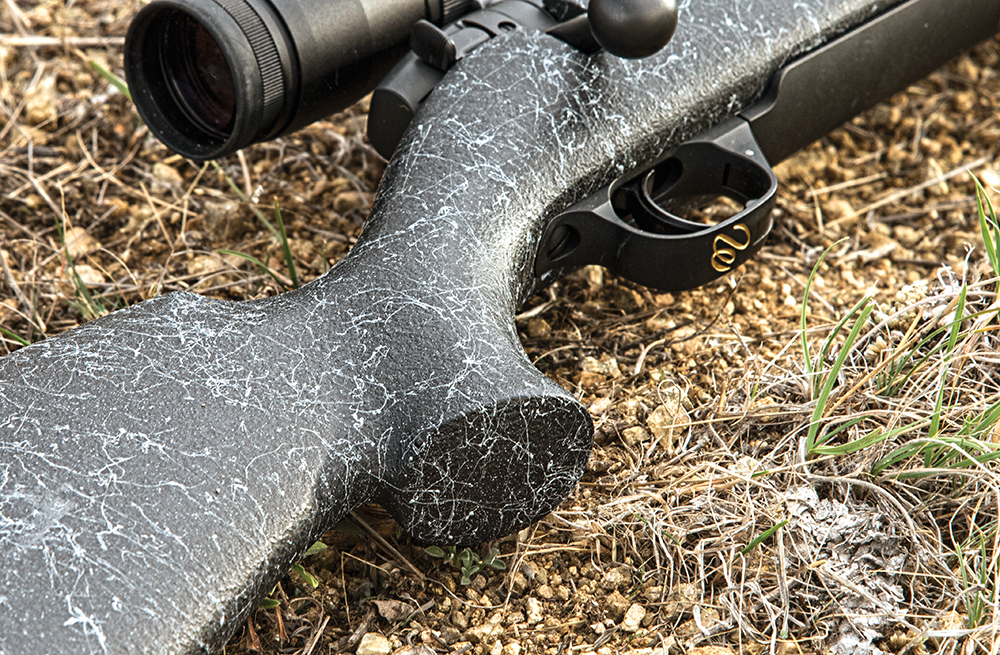 Changes to the stock design on the Weatherby Mark V, such as the noticeable palm swell on the grip, have improved the rifle’s handling while trimming a little bit of weight. Weatherby will be offering the stocks in both right- and left-handed configurations.

The shine and gloss is one thing, but the changes to the rifle extend beyond the cosmetic. The stock, for instance, has a geometry that is completely different from previous versions of the Mark V, and I found it quite pleasing to shoot.

Weatherby has narrowed the forend and given the grip a sharper radius and a noticeable palm swell. The sharp radius allows the shooter to pull the rifle into his shoulder more easily, while the palm swell and raised cheekpiece create solid points of contact with the trigger hand and face, respectively. Together, these features give improved control over the gun.

And that helps with a rifle as large as the Mark V Accumark. With its magnum-length action and 26-inch barrel, it is substantial, weighing 8 pounds 3 ounces unscoped and empty. This control also helps handle the recoil of the 6.5-300, which I found very manageable—more than I would have guessed—during my evaluation.

Another tweak to the rifle is the LXX trigger, which is new and of Weatherby’s own design. It is adjustable down to 2 ½ pounds, but mine came to me set at 2 pounds 15 ounces, which is ideal for a hunting rifle, so I didn’t fool with it. The trigger has a slight amount of take-up that, when engaged, required only a few extra ounces of pressure to break. With a little bit of dry-fire practice to get used to it, I found the trigger offered excellent control.

All Mark V barrels will now be hand-lapped as well, says Weatherby, which should help with accuracy. In addition to the Accumark, the 6.5-300 will be offered in an Accumark RC (for Range Certified, meaning it has been shot at the factory and comes with a target guaranteeing sub-MOA performance) and in an Ultra Lightweight model. The barrels on all three are 26 inches long with 1-in-8-inch twists, though the Ultra Lightweight comes with a 2-inch muzzle brake attached, bringing its length to a long 28 inches. 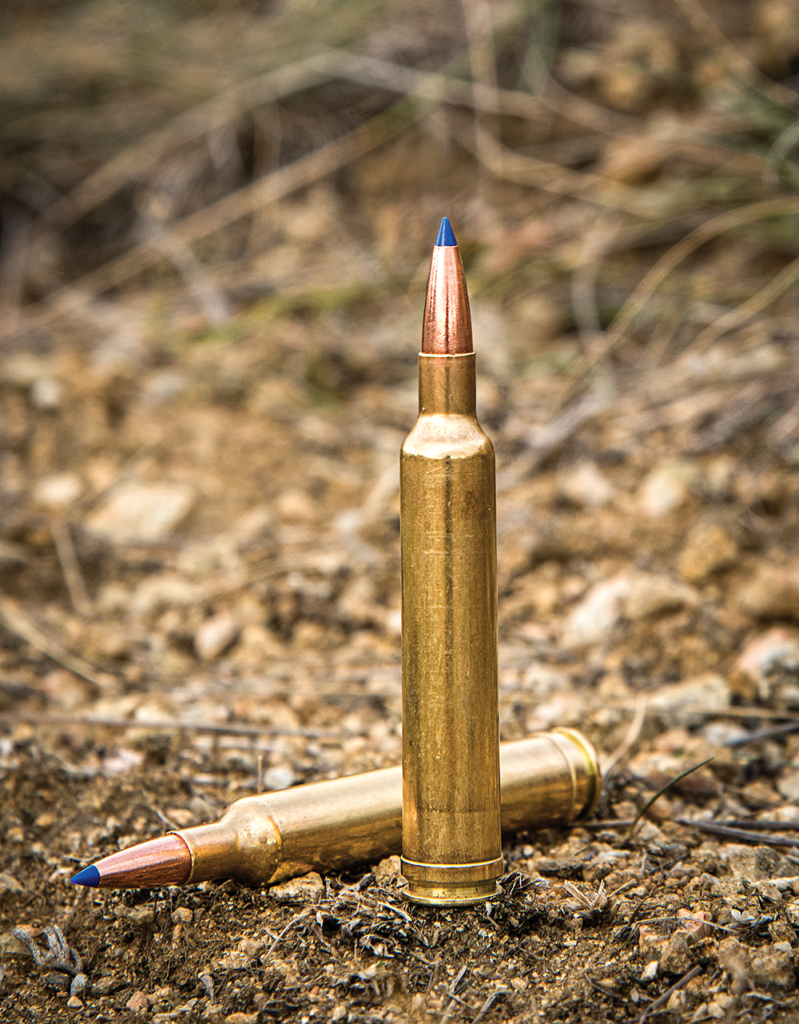 Weatherby is initially offering three factory loads: the 127-grain Barnes LRX at 3,531 fps (pictured); the 130-grain Swift Scirocco at 3,475 fps; and the 140-grain Swift A-Frame at 3,395 fps. All are good hunting bullets, and at these velocities are as flat-shooting as you could hope for.

Accuracy with the rifle was quite good. I shot all three factory loads Weatherby is offering. The 127-grain Barnes LRX load did the best, turning in sub-MOA 5-shot groups, averaging .935 inches. (Like that of most other gun companies, Weatherby’s accuracy guarantee is based on more forgiving 3-shot groups.) The 140-grain Swift A-Frames average group size was 1.174 inches, while the 130-grain Scirocco’s were 1.550 inches. Given that the ammo is not cheap ($95 for a box of 20), handloading the 6.5-300 is worth considering, especially in light of the plethora of great long and sleek 6.5mm bullets out there to experiment with. Yes, it will burn great handfuls of powder, and go through expensive brass at a brisk rate. But beyond its utility—or lack thereof—this new cartridge is pure Weatherby. Its speed and eye-popping ballistics are in keeping with the company’s DNA. From his perch in the gamefields on high, I’m sure Roy Weatherby is smiling.