The most significant legitimate complaint about ARs for big-game hunting is that they are awkward to carry and excessively heavy...

The most significant legitimate complaint about ARs for big-game hunting is that they are awkward to carry and excessively heavy for their caliber. For a quick jaunt to a deer blind or when setting up over a feeder for feral pigs, this isn’t an issue—and that goes a long way toward explaining why you see ARs propped up against dead hogs more often than against elk.

DPMS has traditionally been the most forward-thinking of the AR makers when it comes to reaching out to hunters. Randy Luth, who founded DPMS and owned the company before it was purchased by the Freedom Group, introduced hunting-specific ARs long before any other major manufacturer, so it is fitting that DPMS is once again at the forefront with big-game ARs.

The DPMS GII is a reimagined AR-10-size rifle with a number of innovations built in. Most noticeable of these is that the weight has been stripped from the platform.
Empty, the GII (signifying the second generation of DPMS’s AR-10s) weighs 7 pounds 12 ounces. This is still about a pound more than a comparable bolt-action .308, but is a far cry from the first hunting AR I owned (a DPMS in .260), which tipped the scales at 8 pounds 12 ounces. Another way to look at it is, the GII weighs about the same as a .223-size AR-15.

Minimal Design
The story behind the GII’s weight loss starts with the engineering that went into the internal components, specifically the bolt and bolt carrier. Adam Ballard, DPMS’s product manager, says they realized that they could make a bolt carrier with the same diameter as a .223 AR, while not compromising in any way the strength of the system. The GII is also built with a smaller receiver hub, which is the portion of the upper receiver that the barrel nut threads on to.

Other tweaks include using a new-style bolt key—it is integral to the bolt carrier, rather than screwed and staked in place—that is shorter. This, in turn, allows for a shorter-length receiver.

The net result is a dimensionally smaller and lighter weight receiver. In fact, the initial prototypes of the GII looked so much like an AR-15 that they decided to add on flourishes, like a flared magazine well and a thicker trigger guard, to create an impression of heft so shooters would be able to more easily distinguish it from a .223.

Slick Handling
When we shot the GII as part of Outdoor Life‘s annual test of new rifles and shotguns, the judging panel was struck by how nimbly it handled. The weight differential gives the GII a much-improved feel over other AR-10s. The way the rifle is configured—with a sleek, fixed Magpul buttstock and smooth, round, free-floating handguard—enhances its handling as well. And because it is a semi-auto, the recoil was quite manageable and allowed for rapid follow-up shots during our drills.

With a 20-inch barrel, the overall length of the rifle is just under 40 inches, making the GII fairly compact to wield while hunting, even from within the confines of a blind.

The two-stage trigger on the GII broke at 5.2 pounds with minimal creep or overtravel. You could replace it with a lighter trigger if you like, though I would keep it as is. It didn’t hinder the rifle’s performance or accuracy.

Solid Functionality
It is not unusual for .308 ARs to experience cycling failures with spotty feeding, cartridge extraction, and ejection. The GII tackles these problems as well. The bolt face has two plunger-style ejectors in it, which halves the stress on each of the plunger springs and also kicks the shells free in a more consistent fashion. According to Ballard, this is because each shell is subject to three points of contact (the two ejectors and the extractor) rather than the typical two points.

I can’t verify that particular assertion, but I can report that the GII handled every type of ammo we put through it with zero issues or failures.

Accuracy from the GII was quite good. The average 5-shot group size was 1.75 inches and the smallest group measured .834 inches.

As ARs continue to be fielded in more hunting camps, expect to see the GII—or rifles influenced by its innovations—more frequently. 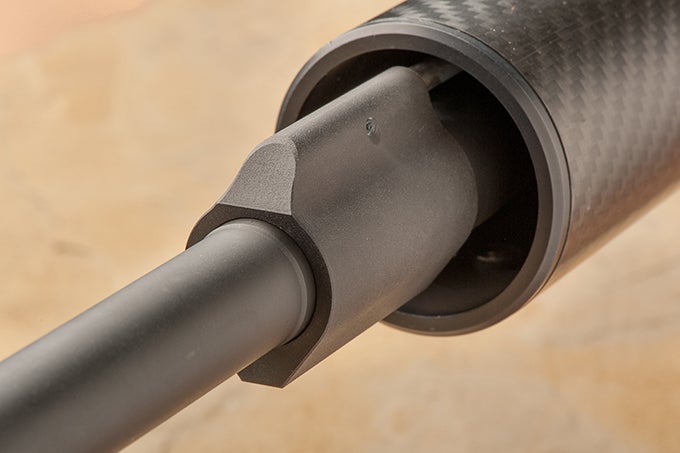 The low-profile gas block is in keeping with the rifle’s minimalistic design. The diameter on the handguard is the same as that on a .223-size AR-15, but the threading on the barrel nut is different, so the handguards are not interchangeable. 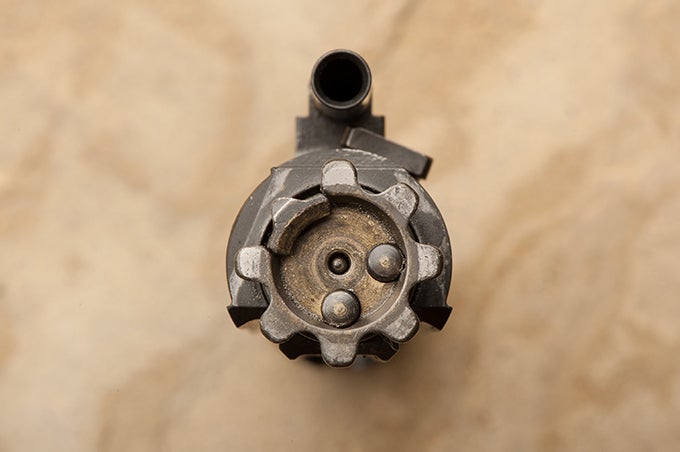 The GII incorporates dual plunger-style ejectors on the bolt face. This reduces stress on the individual ejector springs. The extractor uses an innovative polymer buffer in lieu of a traditional metal spring that is purported to be much more durable.