Put down that 12 gauge and step away from the shotshells 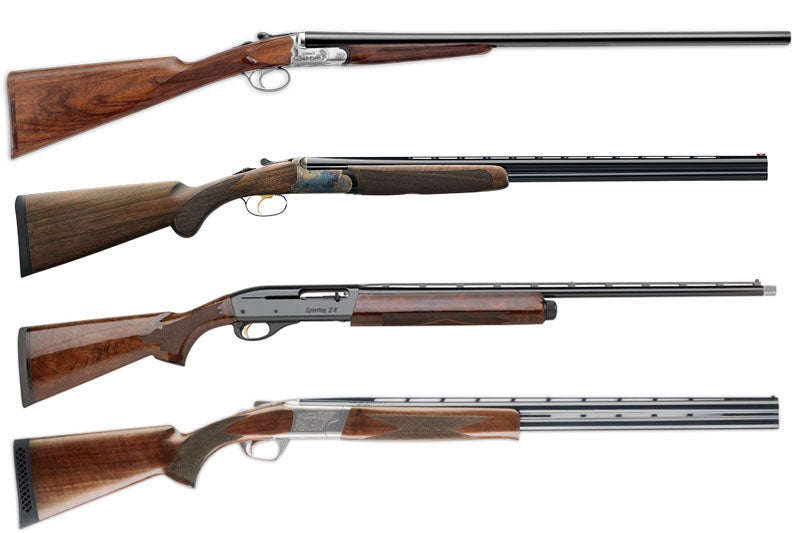 Unless you shoot American skeet or frequent Southern quail plantations, you probably don’t see a whole lot of 28 gauge shotguns. That’s too bad. The 28 gauge is one of the most all-around exciting cartridges to shoot—among both rifles and shotguns. I equate it to the .22LR: It’s a great gun for the beginning shooter because recoil is low (a 28 gauge over/under with a short stock is an ideal first shotgun for a small woman or a kid), and it’s effective on all kinds of targets and game. Oh, and once you shoot one, you’ll want one. I guarantee it.

Unfortunately, the 28 gauge has fallen victim to high ammunition prices and the ever-increasing popularity of the 12 gauge, the cartridge with seemingly endless factory loads and the major boom-boom that the modern sportsman thinks he needs. And that’s where this conversation about the best 28 gauge field-model shotguns currently on the market should start: the misconception of “knockdown power.”

The truth is, a No. 6 pellet fired at any particular speed carries the same energy whether it is fired from a 12 gauge or a 28 gauge. Both kill the same. The difference is that you can fit more shot in a 12 gauge and put more shot downrange, which translates to better pattern density at long ranges.

But if you want to shoot any clay target discipline, hunt upland birds or small game at typical distances, or just want a fun, lightweight gun that’s easy to shoot and easy to carry all day, seriously consider a 28 gauge. Just heed these two pieces of advice. First, if you plan to shoot it a lot, learn to reload and you’ll save a lot of money. Second, don’t spoil the experience by buying the heaviest field loads you can find.

If you want more lead in the air, bump up to a bigger gauge. If you want to shoot the 28, stick with 3/4-ounce target loads and no more than 7/8-ounce field loads. Heavier, faster loads almost always result in increased felt recoil from the light little shotguns that companies are currently manufacturing in 28 gauge.

So, without further ado, here are the guns you should consider. —Curtis Niedermier

I’ve written stories about “budget-priced” over-unders before, and the guns that made those lists all cost far less than the 686 Silver Pigeon I. But they’ve all fallen miles short of the quality that Beretta offers in this over-under, which I consider to be one of the best all-around starter double-barrel shotguns a person can buy. It has the classic 680 low-profile, box-lock action that has outsold pretty much every other over-under ever made worldwide. The MSRP is about $2,350. Check availability here.

I hunted quail with the 28 gauge in Texas last fall and fell in love. It’s light (about 6 ¼ pounds), but perfectly balanced, so you don’t feel like you’re pointing a broomstick. Its design is also tastefully clean, with just the right amount of ornamentation to look good, but not so much that it runs up the price. You can get it with 26-, 28- or 30-inch barrels. One very well-respected shooting instructor told me he owns several with 28-inch barrels and cut-off stocks that he uses to introduce women and young shooters to sporting clays. If you’re on the fence about the 28 gauge, you can pay about $1,200 more and get a 20 gauge/28 gauge combo, each with its own fore-end, and swap out depending on how you’re feeling any given day afield. —C.N.

The Citori was the first over/under I ever spoiled myself with. Based on John Browning’s Superposed design, this line came into existence in the early 1970s. And it’s thrived, because it’s honestly one of the best over/unders an upland hunter with $2,000 can buy (though some models are a bit more spendy than that). The White Lightning (so named because the receiver and action are not blued, but left in the natural, polished metal) is available in 12- and 20-gauge, .410, and now 28 (chambered for 2-¾ inch shells). The stock is finished in Grade III/IV walnut oil. My Citori has a similar oil finish and looks practically new after 10 years of stomping through briar patches. This o/u comes with three extended black Midas chokes (F, M, IC). Sub-gauge Citoris make phenomenal clays guns because they point well, and the recoil is more manageable than the 12-gauge model. They are also a gun you can carry with ease in the uplands. (MSRP $,2,740) —Joe Genzel

Allow me to sell you on the 28-gauge Benelli Ultra Light: It weighs 5 pounds. Seriously. This is your gun if: you hunt chukar or any kind of mountain bird in steep terrain, if you hunt during warm early seasons, or if you bust dense grouse cover. It’s also a great choice if you’re just the kind of upland hunter who lives for the hard-working hunt, who wears out two pairs of boots each season, and who eats up the ground each time you go out. Benelli avoided excess weight by building an alloy receiver, opting for a carbon-fiber rib, limiting the barrel to 26 inches, and shaving weight internally everywhere possible. Yet, it’s still as durable as any Benelli wood-stock shotgun thanks to its Inertia-Driven action and WeatherCoat protection on the walnut. The 28 gauge comes with two chokes and sells for about $1,800. —C.N.

Technically this model of the Remington 1100 is a sporting clays gun, but let’s call it somewhat of a hybrid. Because at 6 ½ pounds and with a walnut stock and blued action and barrel, you’ll have no qualms with carrying it all day in the field. The Remington 1100 in 28 gauge or .410 is the sub-gauge autoloader that I’ve seen on skeet fields more than any other. It’s well-balanced (Remington chose 27 inches for the 28 gauge barrel length to get it just right) to swing well, which is important for a single-barrel sub-gauge shotgun, and it doesn’t produce much recoil. It comes with four extended choke tubes and has a MSRP of $1,341. —C.N.

Forgive me if you’re a pump gun fan because this list is heavy with double-barrel and semi-automatic actions—the best platforms for this wonderful sub-gauge, in my opinion. But this list still has something to offer you, because the Remington 870 Wingmaster—also a classic walnut-and-blue pumps—is available in 28 gauge. With a 25-inch barrel, the gun weighs just 6 pounds. The MSRP is $1020. —C.N.

A fine gun for the money, the Fabarm Elos D2 costs $2,665 (add an extra $150 for a left-handed stock), which makes it “affordable” by Italian break-action standards. The D2 features Fabarm’s Tribore HP tapered bore and five Inner HP chokes for optimal patterns downrange. A 6mm vented rib sits along the top barrel, and the barrels have a sold rib between them, which creates a bit more forward weight compared tobarrels mounted with a space between them. The barrel ejectors clear empty hulls, but will only lift unfired shells. The stock is constructed from semi-deluxe Turkish walnut with a hand-oil finish. Chambered for 2¾-inch shotshells, the Elos D2 weighs under 6 pounds. —J.G.

No shotgun fits in at a quail plantation quite like a side-by-side 28 gauge. The problem is, not everyone wants to pay quail plantation prices for a sweet 28-gauge double. If you’re looking for a quality side-by-side for a reasonable price, check out the Rizzini BR 550. This pretty little gun features a very streamlined boxlock design with a single trigger, 26 lines-per-inch checkering, clean but attractive scrollwork, and the option of a straight or pistol grip stock. It comes standard with 28-inch barrels and fixed chokes, but longer and shorter barrel options are available free of charge, and for an upgrade you can get screw-in chokes. Like any great quail gun, the BR 550 is a lightweight: 5.78 pounds with 28-inch barrels. List price is $4,775. —C.N.

A handy little gun for the grouse woods, the CZ Bobwhite G2 is an ideal side-by-side to shoot in the tight cover ruffies flush from. It only weighs 5.5 pounds, so it’s a cinch to carry all day through the timber of the Northwoods. I do wish the barrels were 26 inches instead of 28, but at this price, it’s hard to quibble. An English-style straight grip accommodates left- or right-handed shooters, and the classic double triggers are an added bonus for a gun that costs $700. Five flush, screw-in chokes come with the G2, a 3-inch gun that also features black chrome finishes on the receiver and barrels. It also has a flat rib, which is common for side-by-sides, but most modern shotguns sport a vent rib, so your sight picture will be a bit different. —J.G.

The only production side-by-side Berretta makes, the 486 Parallelo is as functional as it is beautiful. The 2¾-inch side-by-side looks like it was built for high-falutin’ Euro shoots, but I’ve shot the 20-gauge model in public dove fields and mud-sucked milo for pheasant. And I can assure you—it can take a beating. The rounded action fits uniformly to the barrels, and it’s easy to break open right out of the box (the shells slide in smoothly, too). New leaf springs in the action make for faster and more precise firing pin engagement. A reliable shotgun, the 486 also has a crisp trigger pull that you’ll love. The tang-mounted safety allows you to select which barrel fires first, plus the action is low profile, which enhances your field of view. —J.G.

Some of the best production over/unders in Italy come from Caesar Guerini. And even when the price tags climb into the tens of thousands of dollars, you still get more than you pay for with their guns. The Tempio Light retails for less than $4,500, and while that’s still a lot of coin for a shotgun, I’ve shot plenty of over/unders that cost more and feature a lot less than this 28. The action and fore-end assembly are forged from a high-tech aluminum alloy, and a portion of the stock was hollowed out to lighten the gun, which weighs in at 5.5 pounds. Deluxe Turkish-grade walnut with fine 26 line-per-inch checkering adorn the stock and fore-end. Chambered for 2¾-inch shells, the Tempio comes with five flush-mounted chokes. —J.G.