Thompson/Center has given the potent 500 Smith & Wesson a performance upgrade by introducing it in the Pro Hunter rifle. We set out to test the gains (and pains) involved in shooting this cartridge out of a longer barrel, which generates greater velocity. And kick. 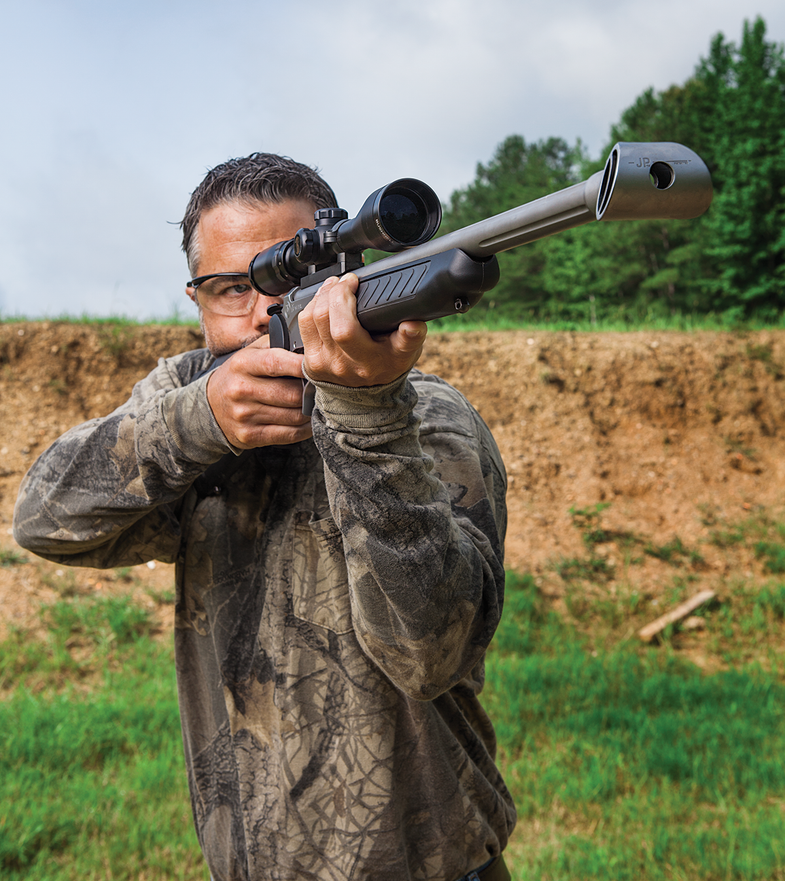 The scope hit Marc Amos with such force that his ears rippled from the impact. This was our first test shot from a Thompson/Center Pro Hunter fitted with a Smith & Wesson .500 Magnum Katahdin barrel. Before judging the recoil too harshly, though, know that Amos—a 47-year-old gun nut from Columbus, Miss.—did fail to grab the forearm of the rifle prior to squeezing the trigger. Still, watching the video of the shot in slow motion was like viewing frame-by-frame footage of Mike Tyson landing a right hook to the belly of Jabba the Hut. Awesome. 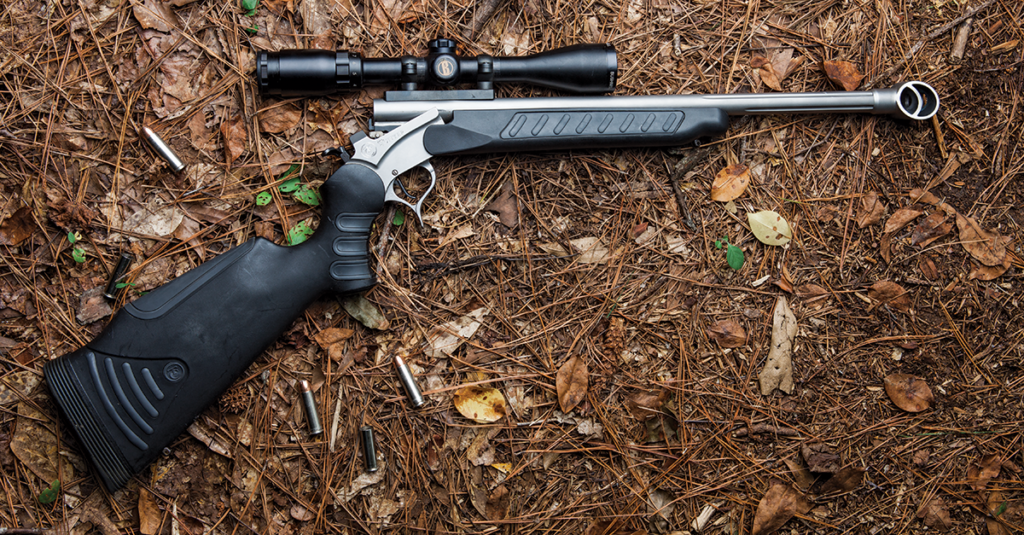 Our goal was to gather data on the S&W .500’s performance in a rifle platform. There’s plenty of information available about how this Godzilla of a cartridge behaves in hand cannons. But velocity, energy, and bullet-drop data on the round in a rifle has been nonexistent. Until now.

▶ The Data
Bullet options for the S&W .500 Magnum range from 275 to 500 grains. We opted for the Federal Premium Vital-Shok 325-grain Swift A-Frame. This bullet is a great all-around choice for hunting big game, and it shoots flat enough so that long shots are possible.

The baseline ballistics from a handgun platform is 1,800 fps muzzle velocity with 2,338 ft.-lb. of muzzle energy. However, when the round is shot from a 20-inch rifle barrel, the transformation is impressive. The chronograph clocked our 10 shots at an average of 2,189 fps, a nearly 300 fps gain when compared to a handgun. The increase in speed translates to a muzzle energy of 3,458 ft.-lb. That’s enough power to knock over a building, as well as any animal walking the earth. 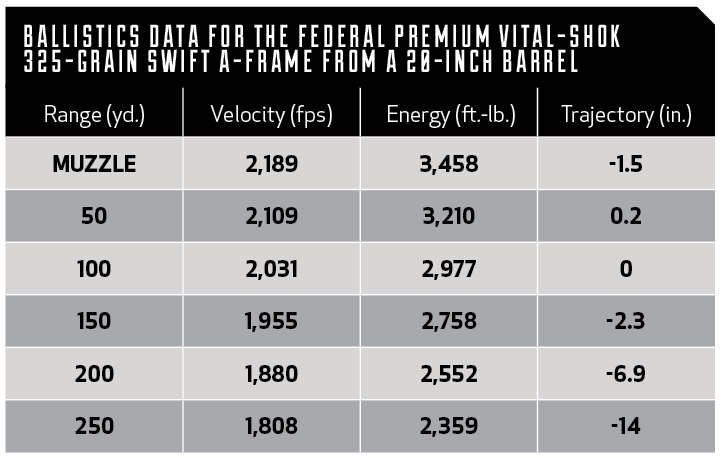 To add a twist to the test, we had an aftermarket muzzle brake installed to measure recoil reduction. We shot one group of five with a muzzle brake and one group without. The muzzle brake had no discernable effect on bullet velocity.

The most surprising result from our test was bullet drop. We assumed a 325-grain bullet would fly like an anchor being thrown from a boat. But with a 100-yard zero, we hit ¼ inch high at 50 yards and 2 ¼ inches low at 150. The bullet still carried 2,758 ft.-lb. of energy at that distance. A 200-yard shot isn’t exactly a lob, either, with the bullet dropping only 7 inches and retaining 2,552 ft.-lb. of energy.

Accuracy was better than expected as well. We had .75-inch 3-shot groups at 50 yards, with our best group at 100 yards measuring 1.3 inches. Things got a little wilder at 150 yards, where our best group was 1.75 inches. Considering this is a 2.25-inch straight-walled handgun round, the results exceeded expectations.

▶ The Recoil
After Amos recovered from his first shot, we attached the JP Enterprises muzzle brake and filmed a second shot in slow motion. To keep things consistent, he shot again without gripping the forearm of the rifle.

This shot resulted in more of a short jab than a heavyweight roundhouse—his ears didn’t quiver. While reviewing the footage, we saw that the muzzle lift was reduced by several inches, which allowed for faster target reacquisition.
Amos took another five shots with and without the brake to judge recoil. Once the testing was done, we came to the conclusion that the Katahdin setup was similar to the recoil of a .300 Winchester Magnum without the brake, and had the punch of a .30/06 once the brake was applied.

In both cases, the recoil was much less than anticipated. The Pro Hunter uses a Sims recoil pad and features a Flex-Tech stock, both of which seem to effectively dilute the kick.

▶ End Game
When slinging this Pro Hunter over your shoulder, you aren’t heading to the woods with a hammer in your hands—it’s more like an anvil. With the muzzle brake in place, the shooting experience is pleasant, albeit loud. It is a stocky, rugged big bore that will not only excel as a brush gun, but it also has the ability to reach out a couple of football fields if need be. And there is not a game animal alive that this caliber will not drop in its tracks. 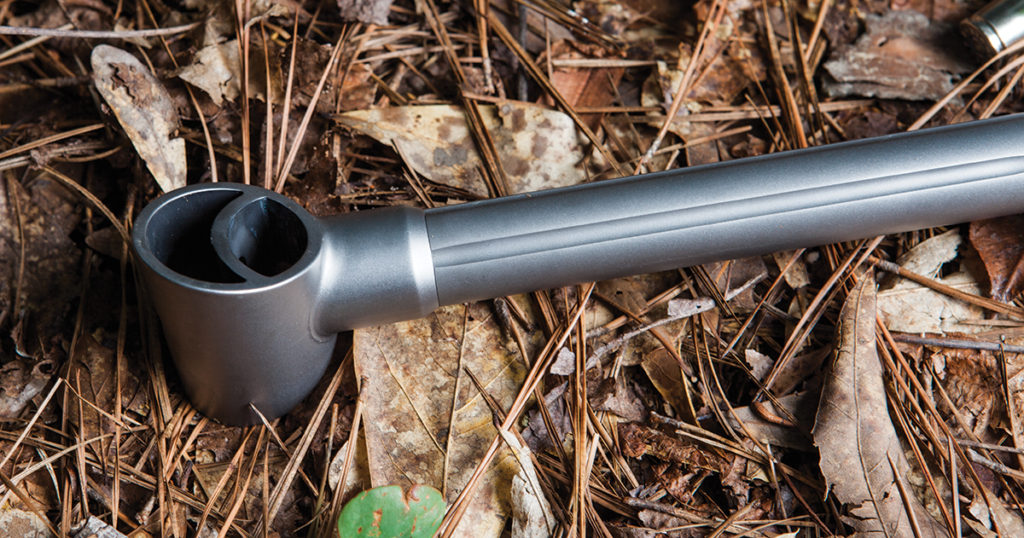 This massive muzzle brake from JP Enterprises is called the Recoil Eliminator, and it is available for a number of different calibers and thread styles. The substantial surface area on the interior baffles redirects the muzzle blast, reducing the felt recoil. 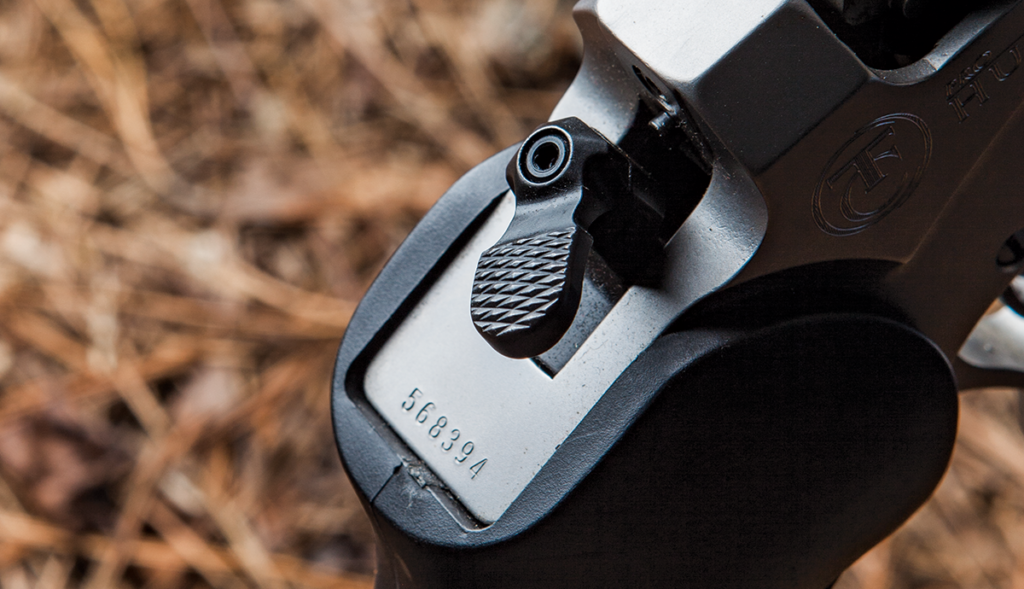 The hammer spur on the Thompson/­Center Pro Hunter is hinged so that it can be rotated to one side or the other. This amount of offset allows the hammer to be cocked more easily (and ergonomically) when a scope is mounted on the receiver. 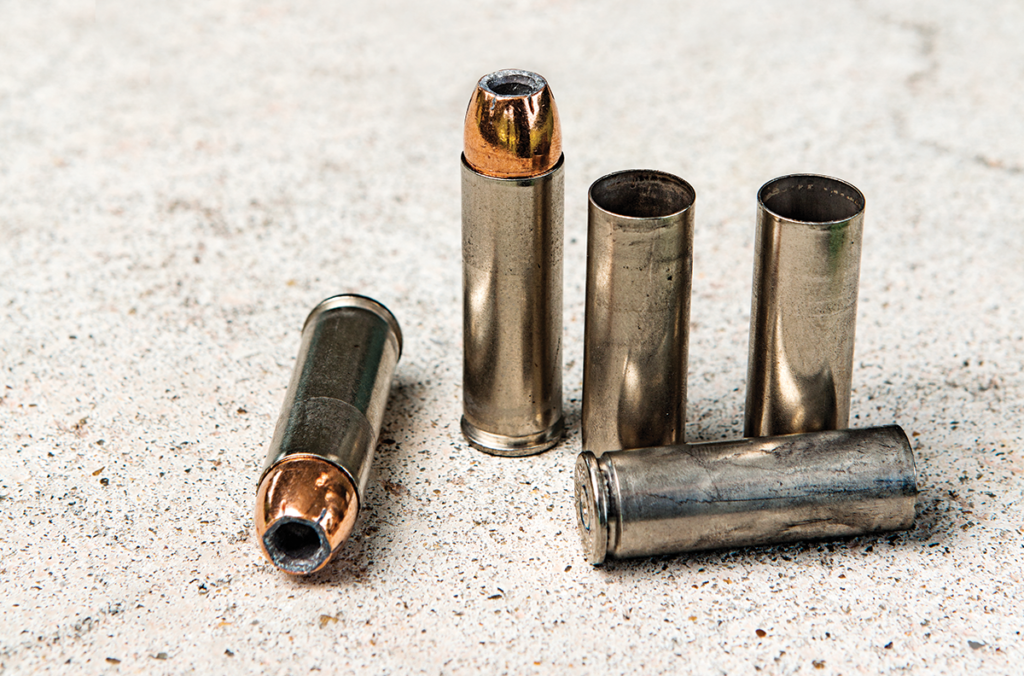 One thing fans of the Smith & Wesson .500 appreciate is its versatility. With bullet weights ranging from 275 to 500 grains in commercial ammo, it can handle a wide swath of hunting and shooting chores—everything from small predators to dangerous game.
Guns
James Hall
Rifles
smith and wesson