10 Classic Hunting Rifles Every Hunter Should Own

These classic hunting rifles bring a good dose of nostalgia, and plenty of real-world performance 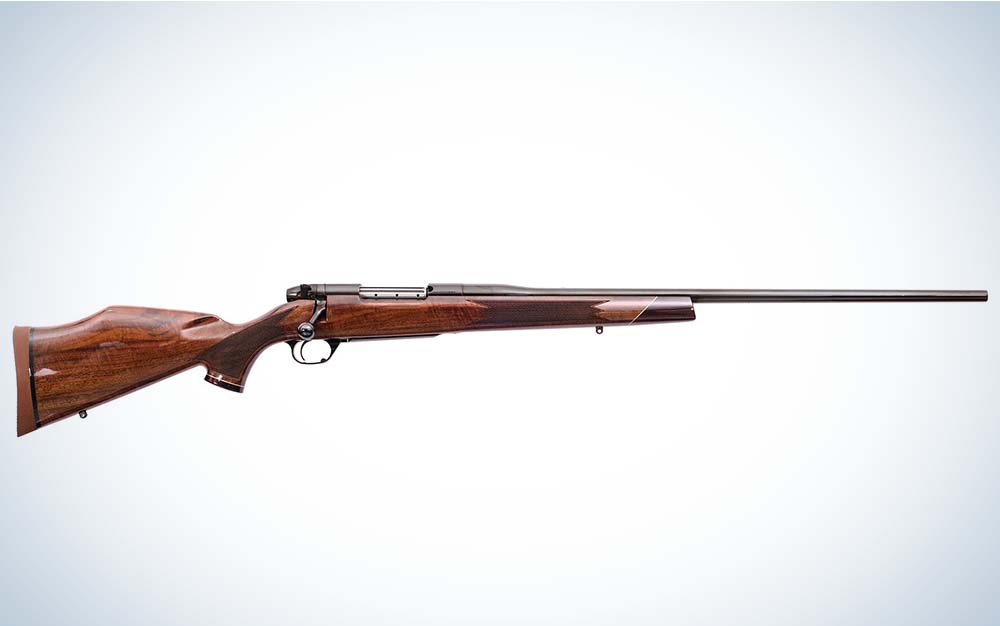 We live in a time where the modern hunter has truly unprecedented options when it comes to choosing a hunting rifle. Scores of manufacturers are producing high-quality, accurate, dependable rifles (as you can see in our review of the best rifles of 2022). Even many budget rifles that are purely utilitarian (these rifles are not intended to be heirlooms) are capable of great performance.

The quality and quantity of modern hunting rifles can be overwhelming. For the most part, rifles are just tools to me, and they’re easy-come-easy-go. There’s only one rifle that I really, really regret selling—a heavy-barreled Howa 1500 in .308.

With that said, even if we fully embrace the quality and performance of contemporary rifles—and make memories with them, which will turn them into classics of tomorrow—we can still appreciate the vintage hunting rifles of our parents’ and grandparents’ generations. Every hunter ought to have at least one vintage hunting rifle to keep that spark of sentimentality alive. But then again, how could you pick just one? Turns out that I can’t, but if I had to narrow it down to a list of the top 10 classic rifles, these would be my picks.

Many, if not most, of our modern bolt-action hunting rifles have their roots in military rifles of the late 19th and early 20th centuries. After the World Wars, an abundance of surplus rifles was quickly taken advantage of by hunters. The 1903 Springfield was commonly “sporterized” by pulling the action and putting it in a shorter, more-handy “sporter” stock. Of course, they were often re-barreled, re-chambered, and highly-modified for specific hunting purposes—all based around the robust 1903 action.

It was common for gunsmiths to “sporterize” surplus rifles for customers, turning them into heirloom hunting rifles. If I was to buy one, I’d take the original .30/06 chambering, although they were often re-barreled in other calibers like .270 Win. The 1903’s action was built for battle, and its heavier and more robust than most of our hunting actions today. There’s no doubt though that it would make a fine hunting rifle even today. Our family still has a sporting 1903 that my grandpa had built, chambered in .270 Win., and someday I’ll kill a moose with it.

If there is a ubiquitous American hunting rifle that transcends time and space, it’s the pre-64 Winchester Model 70. After being introduced in 1937, the Model 70 became known as “the rifleman’s rifle,” and a favorite of long-time Outdoor Life editor Jack O’Connor.

The Model 70 was more refined than previous copies of Mauser-style controlled-feed actions and featured a three-position safety. A redesign of the Model 70 in 1964—including conversion to a push-feed action—almost instantly made the pre-64 Model 70’s collector’s items. Even today, pre-64 actions are popular for custom hunting rifle builds and original rifles are as collectible as ever.

Although O’Connor noted—in his introduction of the “new” Model 70 in the March, 1964 issue of OL—that the “new Model 70” featured a stronger action, better case head support, and several other features he viewed as improvements, he still believed that the Model 70’s produced prior to World War II “were probably the best factory-produced big-game rifles ever turned out.”

I’d love to take an original pre-64 Model 70 in .458 Win into the alders for brown bear, or have one in .220 Swift, like the one that famous Alaskan wolfer Frank Glaser took such a shine to. If I were to build off an action, I might go for a .375 Ruger. Whatever the choice, it would be a special rifle.

If I were to venture into the territory of iconic deer rifles, how could I ever ignore the Savage Model 99? Somewhat odd-looking, this design from 1899 was one of the most popular American hunting rifles in the early 20th century—and still carries quite a following.

It was a lever-action that featured a unique rotary magazine that allowed for spitzer-style bullets to be used—something tube-fed lever guns couldn’t do. It was offered in a variety of cartridges, but if I had to pick one, I’d probably go with the .250/3000 Savage. It was a screaming-fast cartridge when it was released in 1915 and doesn’t lag too far behind the .25/06.

In just about any offering, the Model 99 would be a great deer or black bear rifle, and the aforementioned Frank Glaser noted that in .250/3000 Savage, it was his favorite all-around market hunting rifle.

Single-shot hunting rifles aren’t what most of us have in mind when we think of the classics, but the Ruger No. 1 is one that has stood the test of time. It was introduced in 1967 and is a hammerless falling-block single shot that styled after the British Farquharson rifles and was offered in a plethora of chamberings and developed a cult-like following.

In an article introducing the Ruger M/77 in the September 1968 issue of OL, O’Connor says the following regarding the still-new Ruger No. 1:

“The production of a single-shot big-game rifle was a bold gamble on Ruger’s part. I am sure that 9 out of 10 market consultants would have said that the demand for single-shot rifles for centerfire cartridges had gone out with the mustache cup and the Stanley Steamer. In spite of all this and also in spite of the fact that Ruger gets a premium price for the No. 1 single shot, his (Bill Ruger) only problem has been to produce the rifles fast enough.”

Another classic deer rifle that everyone should at least be familiar with is the Marlin 336. The Marlin 336 was introduced in 1948 and produced until recently. It’s one of the most popular lever-action deer rifles and commonly chambered in .30/30 and .35 Remington.

The style of deer hunting has changed in many ways over the decades, but there’s still a place for the quick-pointing, hard-hitting, close-range woods rifle that the 336 is. From an availability perspective, it would make sense to get one in .30/30—and that combination has accounted for untold amounts of game—but in a perfect world, I’d have one in .35 Remington.

The future of the Marlin 336 is uncertain, but after seeing what Ruger’s ownership of Marlin has done for the Model 1895 in .45/70, if they resume production of the 336, they will likely be the best made to date.

A stainless-steel Ruger 10/22 was my first rifle, and one that I had envied for a long time. The 10/22 is likely the single most successful .22 LR design ever made. It’s a recoil-operated semi-automatic action chambered in .22 LR that’s still in full-production today. The basic 10/22 carbine has the nifty feel of a .30 caliber M1 carbine and utilizes a 10-round rotary magazine.

With its long-term popularity and simplicity, the 10/22 has become one of the most versatile and customizable .22’s ever—if not the most. Ruger has offered takedown models, but the market is also ripe with aftermarket parts and accessories. Extended magazines, stocks, integrally suppressed barrels, triggers, and more are available.

Although the 10/22 is nearly 60 years old, it’s just as relevant today as it ever was. The 10/22 is simple, fun, and a joy to shoot. When we only had one predator rifle, I used my 10/22 loaded with CCI Stingers to kill quite a few coyotes while growing up and hunting with my dad.

Aside from the Ruger 10/22, the Remington Nylon 66 is often regarded as one of the best production semi-auto .22 LR rifles ever made—at least if you’re asking a member of its cult following. The unique, almost toy-looking rifle was a fairly radical development—and one of the first to use a synthetic (nylon) stock.

This semi-automatic rifle was fed from a magazine tube that was loaded through the back of the stock and was known for its reliability with many different types of ammo. In fact, part of the incorporation of these synthetic parts into the design was to eliminate the need for lubrication.

My buddy Patrick had a Nylon 66 when we were growing up—I believe it had been his dad’s—and I remember hunting jackrabbits together with it in the sage brush of southern Colorado one time when a lightning storm moved in. I don’t recall how many rabbits we got, but I do remember being able to hear the wall of rain coming, and a nearby lighting strike that was so close it scared us out of our shorts. I recently saw a Nylon 66 at the local shooting range, and if I ever see a good deal on one, I’ll snatch it up.

As someone who rarely gets to hunt deer, I do have a soft spot for some of the classic deer rifles, and if I had my pick of any classics, I’d want a Remington Model 760. The 760 is a box magazine-fed pump-action with similar looks to Remington’s 870 and 1100 shotgun lines. It began production somewhere around 1952, and naturally became a very popular deer woods rifle.

Not a style of rifle that’s commonly associated with Alaska or western-style hunting, the Model 760 is a quick-pointing, quick-shooting bush rifle. It’s great for hunting in thick timber where shot distances are limited, but shots might be fleeting. A buddy tells me that it’s still very popular with deer trackers in New England.  I don’t have whitetails to track here in Alaska, but kept well-oiled, a Model 760 Gamemaster in .30/06 would be a great for bear hunting over bait.

Designed by Bruce Browning, grandson of John M. Browning, the sporting BAR is a semi-automatic hunting rifle that was introduced in 1968 and first produced in Belgium. It’s box magazine fed and features a hinged trap-door floorplate that’s opened to insert the magazine.

The BAR has been highly successful, and different models are still in production today—including variants with larger detachable magazines. It’s an elegant rifle and the older models are some of the finest-looking semi-automatic sporting rifles there are. My uncle has one in 7mm Rem. Mag. that he babied for a long time before deciding to just use it. He took several sheep, caribou, moose, Alberta whitetails, and a big grizzly bear with it.

Although I usually prefer to hunt with bolt-action rifles, for semi-automatics, it’s hard to be more classic than an original BAR.

Among iconic names and brands in the firearms industry, Weatherby is one that continues to stand out. After outsourcing his actions and being unhappy with the coned Mauser actions that didn’t fully support the case head, Roy Weatherby set out to have a completely new action designed to handle his high-pressure, speedy cartridges.

The Mark V was introduced in 1957 and features a robust action that is the basis for many of Weatherby’s rifles even today. The basic Mark V action is heavy-duty and features full case support, nine locking lugs, and a short bolt throw.

Chambered in .300 Weatherby Magnum, you wouldn’t be under-powered to take on anything in North America—and much of the world with the Mark V.