A Lever Action .30-30 Winchester Is Still One of the Best Deer Hunting Rifles (and Here’s Why)

The .30-30 is still one of America's great whitetail deer hunting cartridges 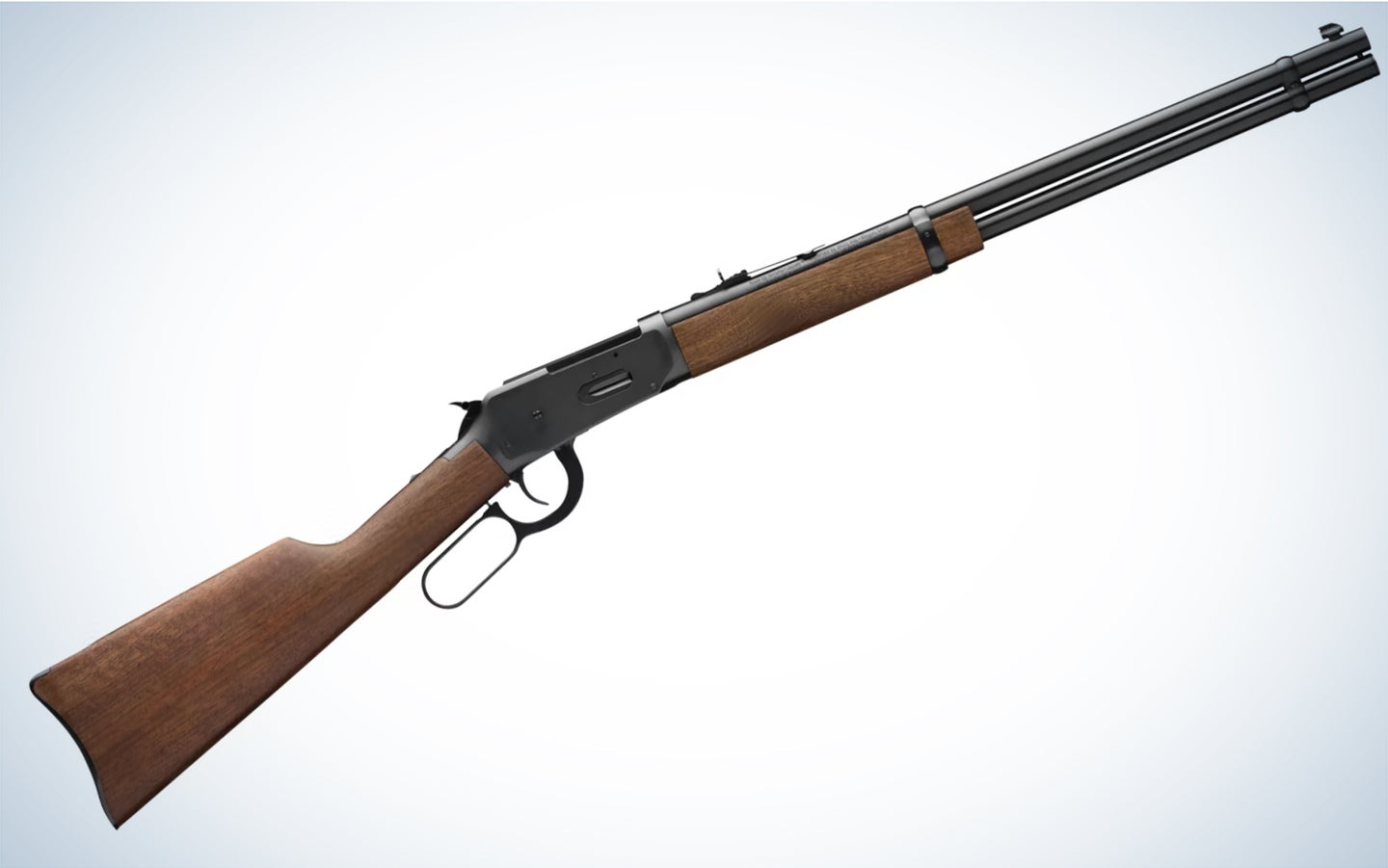 Over its more than 125-year lifetime, the lever-action .30-30 rifle has arguably killed more whitetail deer than any other single cartridge. And with the cartridge’s popularity still quite high, it’s doubtful it will be unseated in that category any time soon.

The cartridge’s speed and power, combined with the lever-action’s capacity and quickness, made it an instant hit as a deer cartridge. Before long, it became a go-to choice for deer hunters.

As major ammunition companies caught on to the .30-30’s popularity, they began manufacturing loads specifically for lever guns—the two most popular were topped with 150-grain and 170-grain round-nosed slugs. The reason for the round nose was obvious—since the gun’s tube magazine held ammunition stacked tip-to-primer, a pointed-nosed bullet denting a primer could lead to an accidental discharge in the magazine. Ironically, that round-tipped ammo led to the cartridge’s fall from grace when longer-range cartridges with pointed tips and superior ballistics hit the market years later.

Yet despite competition from the .308, .30-06, and .270—all fine deer cartridges in their own right—the .30-30 has continued to be popular with many hunters over several generations.

The early 150-grain and 170-grain loads, which were fairly slow by today’s standards, remained popular for the cartridge’s first 100 years or so. Eighteen years ago, I bought my oldest son, Josh, a Marlin 336 in .30-30 when he was 11. At the time, we weren’t hunting much open country and opted for the 170-grain round points offered by Remington.

Leaving the muzzle at about 2,100 fps, the big bullet turned out to be devastating. The deer he shot with it didn’t just drop, they dropped stone-cold dead in a mystifying manner. One small buck fell so hard it killed a small rodent that apparently had been scurrying down the same trail. When we went to look at the buck and turned it over, the little rodent was smashed flat, still warm.

Why I ever wanted to change ammo with that kind of performance is perplexing to me now. But then Hornady introduced its new LEVERevolution ammo, and I just had to put it to the test. The new cartridge uses an elastomer flex tip on a spitzer bullet, making it safe for use in the gun’s tubular magazine. The design is ballistically superior to its round-nosed predecessors.

When Hornady introduced the LEVERevolution ammo, it was just the shot in the arm the .30-30 needed. The Evolution bullets delivered a substantially higher ballistic coefficient and retained more downrange energy than the old stuff.

Since Hornady’s breakthrough, other manufacturers have added pliable-tipped .30-30 ammunition to their lineups, too. Winchester’s Deer Season XP line of ammunition features a polymer tip on a 150-grain bullet for safety in tube magazines and greatly improves ballistic performance over previous ammo. The bullet has an alloyed lead core, a contoured copper jacket, and a large diameter polymer tip to accelerate the bullet’s expansion on impact. It leaves the muzzle at 2,390 fps with a muzzle energy of 1,902 ft-lbs.

Federal now also makes ammunition specifically for lever-action rifles. Their lever-action line, called HammerDown is of course loaded in .30-30 and has a modified chamfered case (which is also nickel plated) for easier loading. The 150-grain HammerDown bullet has a advertised muzzle velocity of 2,390 fps (same as Hornady’s). The HammerDown line was designed in partnership with Henry Repeating Arms.

Winchester also has the Super-X .30-30 load topped with a 150-grain Winchester Silver Tip. That bullet leaves the muzzle at 2,390 fps carrying 1,902 ft-lbs of energy—identical to the Deer Season XP load.

Lever-action rifles may not be considered the most accurate long-range rifles, but they have plenty of other factors working in their favor. Made famous by western movies and television shows, they were carried by many of our childhood heroes. The quickness of the lever-action for back-up shots is better than that of a bolt-action, as shooters can keep their eyes up to the scope or sights when levering in another round. Rifles chambered in .30-30 also tend to be lighter than many other deer rifles, making them easier to carry and shoulder than their typically longer-range counterparts. They also are on the lower end of recoil for deer rifles, making them a good choice for beginners.

Generally, .30-30 rifles and ammo tends to be less expensive than most bolt-action hunting rifles. An average box of .30-30 ammo will run at least a couple of dollars cheaper than .308, .270, or .30-06 cartridges. And what’s not to love about a quick, light, low-recoiling rifle that can be bought and shot on a budget.

As for accuracy, much of the .30-30 lever gun’s perceived fault in this category was due to factors other than the cartridge’s actual accuracy. The big, round-nosed bullets of yesteryear weren’t very accurate to begin with when compared to their newer, pointed brethren, regardless of what gun fired them.

The fact that many .30-30s wore only iron sights led to additional criticism of the .30-30’s accuracy, as precise shooting at longer ranges is difficult with open sights. That’s not a factor anymore, unless you simply prefer iron sights. Quality optics now make it a no-brainer to put a good, low-power scope on your .30-30 for better shooting.

Additionally, with the higher-quality, more-consistent manufacturing practices used over the past three or four decades, nearly all rifles are more accurate than they used to be. In a nutshell, out to 200-250 yards—and most deer in the East are shot at closer ranges than that—if you can do your job, a good .30-30 rifle with quality ammo will do its job, too.

Many lever-action .30-30 models are still being produced today, nearly a century and a quarter after the original. One of those is the original .30-30—the Winchester ’94. That model, which many consider to be the “true” .30-30, is shorter than some competing models, but that’s not necessarily a disadvantage. And at 6.5 pounds without ammo and scope, the new iteration is a nice, light package to tote around the woods.

First introduced in 1948, the Marlin 336, has been produced on a continuous basis since then and has somewhat of a cult following. The newest 336, a 38.7-inch rifle weighing in at 7 pounds, sports a 20-inch barrel. Often priced much less than the Winchester, it doesn’t give up much in the quality department.

The Marlin XLR is another fine .30-30 lever-action rifle with a less traditional look. Featuring a laminate stock and stainless-steel components, this gun will take on all weather conditions. And its 24-inch barrel will let hunters get the most out of high-performance .30-30 loads that have become so popular. It doesn’t look like John Wayne’s rifle, but the XLR will get the job done quite well.

The All Weather also has a more modern look than the Winchester and Marlin 336, and has been getting love from lever-gun fans. It features a wood stock and forearm with a weather-resistant, moisture-protected coating, along with a hard-chromed exterior finish on all surfaces except the stainless barrel, sights, and springs. It’s a nicely balanced rifle with a heavier, dark wood stock.

For an even more modern take on the lever gun, look no further than Mossberg’s 464SPX. This unique .30-30, with its modular-looking design and plastic furniture, might not be the gun you are seeking for your upcoming deer hunting adventures. But for a home defense gun, you could do a lot worse than 5+1 rounds of .30-30 from a short-barreled, lever-action rifle.

Read Next: How to Make Your Lever-Action Rifle More Accurate

Final Thoughts on the .30-30 Winchester

If you are going to argue about the merits—or lack thereof—of lever-action .30-30 rifles, you must take into account the many hundreds of thousands of deer that have fallen to this cartridge over the last 125 years. As in the past, one thing is still true today: A deer shot in the right spot by a hunter with a .30-30 rifle is going to be just as dead as a deer shot in the same place by a hunter using a .308, .30-06 or .270.

If you like lever guns and the .30-30 cartridge, take heart because right now, both are better than ever.