Why Did the .243 Winchester Succeed While the .244 Remington Failed?

Years ago, Jim Carmichel did an in-depth test on rifling twist rates to investigate why the .243 succeeded and the .244 failed. The results are still telling today 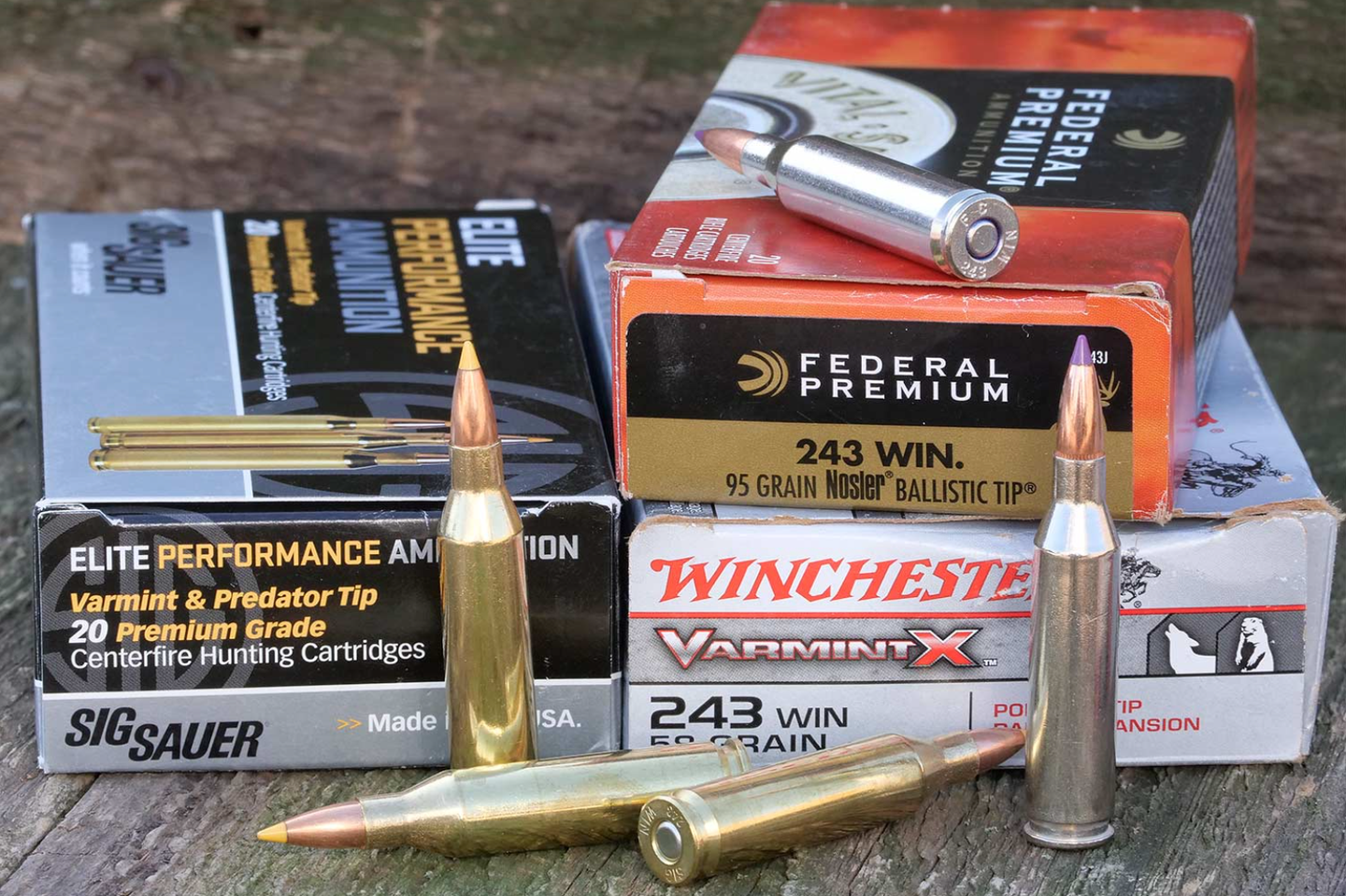 The .243 Winchester is still a popular cartridge for varmints and mid-sized game. The .244 Remington? Not so much. Ron Spomer
SHARE

More than 65 years ago two of the largest rifle and ammunition manufacturers unveiled two nearly identical cartridges that were instantly engaged in a titanic struggle for supremacy. Within just a few years, one emerged overwhelmingly victorious, leading to worldwide popularity, while the other suffered eventual obsolescence.

Why one cartridge succeeded while an equally good cartridge failed miserably has been a topic of debate among gun buffs for decades. Naturally, when a shooting topic is much discussed, and many opinions rendered, myths will emerge. Thus was born the myth of why the .243 Winchester cartridge prevailed while the .244 Remington foundered.

The .243 and .244 were almost ballistic twins. Both were 6mm caliber (a novelty at the time) and fired bullets of near-identical weights and velocities.

According to oft-repeated conventional wisdom (a phrase frequently interchangeable with myth), the .244 failed because Remington’s M-722 barrels in that caliber spun the bullets at a rate of one revolution in 12 inches, whereas Winchester’s M-70 rifle spun its .243 bullets once in 10 inches. As a rule, bullets that are long relative to their diameter require a faster rate of spin to stabilize than do shorter bullets. Consider ordinary .30-caliber bullets, which come in a wide range of weights. A 220-grain bullet requires a faster rate of spin to be stabilized and accurate than does a 110-grainer. Fortunately, most bullets tend to be somewhat forgiving and deliver good accuracy even when the numbers say they shouldn’t, which is why gunmakers can usually get away with offering only one particular rate of twist for each caliber they manufacture.

I’m told that the folks at Remington foresaw their new caliber as being used primarily for varmint hunting and opted for a 1-in-12-inch twist, which would likely yield best accuracy with lighter, varmint-type bullets in the 75- to 90-grain range. The wise heads at Winchester, on the other hand, figured that while their new .243 would be good for varmints, it also had great potential for bigger game such as deer and pronghorn. Accordingly, they decided on a 1-in-10-inch twist as a compromise that would yield better accuracy with the 80- and 100-grain bullets they initially offered. Thus, it became legend that the .243 Winchester succeeded because of its all-purpose designation and the .244 was doomed by comparison because it was good for varmints only.

Frankly, I never bought into this hypothesis, and as the legend grew I became even more skeptical, firmly believing that the core reason for the success of the .243 Win. was the rifle in which it was initially offered: Winchester’s immensely popular M-70. I’ve even stuck my neck out a few times with the suggestion that if the calibers had been reversed, with Winchester offering a .244-like caliber, 1-in-12-inch twist and all, it would still have been the winner because of the popularity of the rifle.

By contrast, Remington’s M-722 was a plain-looking thing with no checkering and a stamped and bent sheet-metal trigger guard. Accurate yes, at least on a par with the accuracy of a typical M-70, but those were the postwar days, when riflemen tended to dote on Mausers and ’03 Springfields, of which the M-70 was kin and heir. Remington’s “new look,” an almost total abandonment of its prewar models, had yet to gain the widespread acceptance that would come later.

Well, that’s been my theory and I suspect a lot of old-timers agree, but still there’s a nagging curiosity about how important that 2-inch difference in twist rate between the two rifles really was. If Remington offered a .244 loading with a 100-grain bullet, would it have been sufficiently accurate in its rifle’s 1-in-12-twist barrel? If so, conventional wisdom as to the .244’s demise would have no solid evidence.

READ NEXT: 3 Forgotten Cartridges Found on the North Dakota Prairie: .225 Winchester, .307 Winchester, and the .244 Remington

There’s only one way to know for sure, and that is with comparative testing. Of course, simply comparing the accuracy of an M-70 and an M-722 in their respective calibers would be fundamentally flawed because of the accuracy potential, or lack thereof, of the two individual specimens tested, aside from their differing rates of twist. The more scientific approach is to test identical rifles differing only in their rates of twist-or better yet, to use heavy, target-grade barrels to further the objectivity of the testing procedure.

Accordingly, we had three tuned Remington M-700 short-actions fitted with stiff, air-gauged, premium-grade Douglas barrels in .243 Win. All fitting and chambering was done at the Douglas plant by a chambering specialist using the same reamer for each barrel so the chambers would be identical. In addition to barrels with 1-in-12-inch and 1-in-10-inch rates of twist, we ordered a third barrel with a 1-in-8-inch twist so we could observe the effects of even faster spin on the bullets tested.

During the test series the barreled actions were alternately tested in the same HS Precision synthetic stock with an aluminum bedding block, in order to further reduce the chance of accuracy variations that can occur with different stocks. Likewise, the same Leupold 8.5-25x50mm scope was used in all tests. Ammunition included factory loads and handloads with a variety of bullet brands, shapes and weights. All handloads were in virgin brass and each of the three rifles was tested with a series of 5-shot groups at 100 yards with each of the loads.

After every 10 shots the barrels were cooled and ritual-cleaned (meaning the same solvent, numbers of patches and brush strokes were used for each cleaning). In other words, we took great pains to level the playing field.

Since the 1-in-12-inch-twist myth was the main object of the experiment, that was the barrel tested first. Beginning with Winchester’s Supreme 55-grain Ballistic Silvertip load, groups were uniformly small, ranging from ½-inch to ¾-inch and always well under an inch. That was no surprise, since it’s with the lighter bullets that the 1-in-12-inch barrel is expected to do best. Moving on up to heavier bullets, accuracy was initially encouraging, with handloaded 100-grain Sierra Spitzers grouping slightly under an inch. I considered this proof that my contention about the .244 Remington’s failure was about to be confirmed.

But a few good groups do not a comprehensive test make, and they can easily lead to false conclusions. This might very well have happened had our test series not included 16 different loads and bullet weights. As more and more of these loads were tested, it became increasingly clear that my theory was falling apart. To put it bluntly, the accuracy of some of the heavier bullets in the 1-in-12-inch barrel was awful. True, some of the bullets were not expected to do well in the slow twist, such as the Berger 105-grain or Sierra 107-grain VLDs (Very Low Drag), which shot all over the target as predicted. Because of its length and shape, this type of bullet requires an extra-fast spin to stabilize, and groups were as big as 10 inches in the 1-in-12-inch barrel. The bullet holes were the “keyhole” shape of unstable bullets not flying point-forward. But more of a puzzle was the fact that the Hornady 87-grain hollowpoint grouped beautifully, while a bullet weighing only three grains more (the 90-grain Swift Scirocco) keyholed all over the targets. Obviously, bullet shape and construction, and not just weight, were determining factors.

With the 1-in-10-inch-twist barrel, accuracy improved across the board, and I happily conceded that I had been all wet with my long-held notion about Remington’s .244-caliber rifles. Furthermore, the 1-in-10-inch barrel delivered accuracy with bullets as light as 55 grains that was almost as good as that with the 1-in-12-inch barrel, which clearly indicated its all-purpose advantage over the slower twist.

But there was still more to be discovered about the peculiarities of rifling twist. For instance, of the two VLD bullets that performed so miserably in the 1-in-12-inch barrel, the 105-grain Berger now grouped beautifully in the ½-inch range while the 107-grain Sierra lobbed 6-inch groups and made elliptical holes in the target. Why would two almost identically shaped bullets, both well-made and differing in weight by a scant two grains, perform so differently?

This riddle was solved when we switched to the 1-in-8-inch barrel and repeated the test series. The Sierra VLD now grouped beautifully, but the Berger VLD grouped even better! One of the groups shot with Berger bullets measured exactly .250 inches—the best of the entire test series. Which goes to show that a 2-inch change in the rifling rate can transform scattered shots into bug-hole-size groups.

This exceptional accuracy with the 1-in-8-inch barrel was isolated to only a few loads, however, as groups tended to open up with other loads and bullet weights, demonstrating once again that extra spin can be too much of a good thing. There were no signs of bullet yawing (tilting) with the 1-in-8-inch barrel, but the characteristic sign of accuracy decay was two or three shots in a close central group with the other shots going wide by an inch or two.

Some factory loads and handloaded bullets tended to do well in all three barrels, notably Winchester’s Supreme loading of the 55-grain Ballistic Silvertip, which has a muzzle velocity of 3,910 fps and is an excellent all-around varmint load. Some other loads didn’t shine nearly so brightly in any of the barrels, no doubt due to their basic design and construction.

So after days of shooting and reshooting, what was learned? First the tests proved conclusively that Winchester knew what it was doing when it opted for a 1-in-10-inch twist way back at the birth of the .243. It was also clear that Remington made a smart move when it changed the name of its old .244 to 6mm Remington and switched to 1-in-10-inch barrels for that caliber.

The greater lesson, though, was demonstrating the fickle nature of rifle bullets and how seemingly slight changes in weights, shapes and twists can radically alter results. This is why I (and generations of gun writers living and gone) always recommend trying a variety of ammo brands and types to determine which is best for your rifle. And speaking of writers, I try not to repeat myself too often, but there is one line I wrote years ago that’s worth saying again: “Nothing will make you sound more of an expert than a discussion of rifling twist—or prove you more of a fool.”