Is the Winchester Model 70 Featherweight as Good as It Used to Be?

It’s been 70 years since the Model 70 Featherweight was introduced and they’re still in production today. How does the current production model stack up? 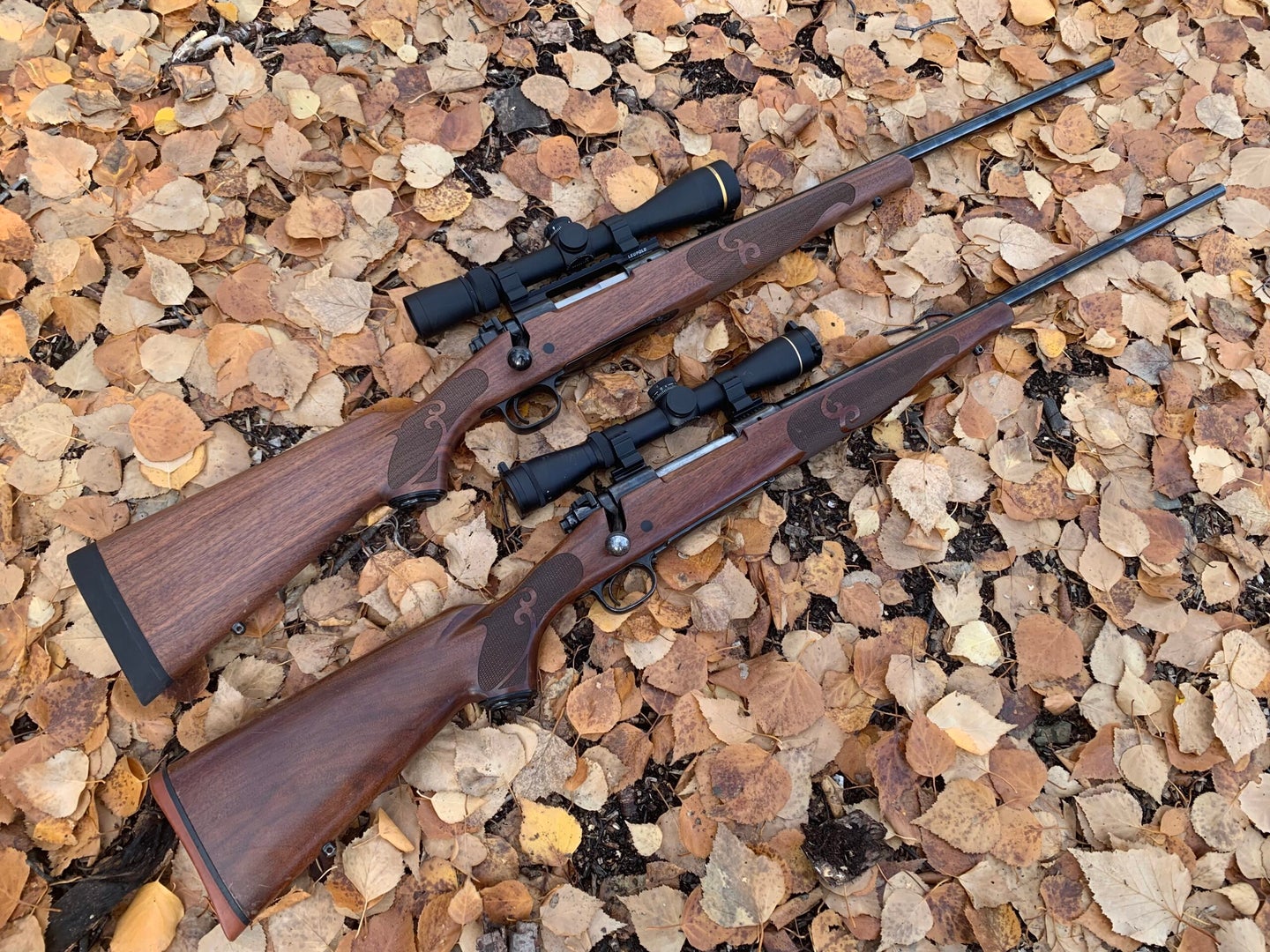 The Winchester Model 70 Featherweight is one of the most iconic and instantly recognizable production hunting rifles ever made. The Featherweight’s black walnut stock, unique checkering pattern, and Schnabel fore-end can’t be mistaken. It’s still in production after a 70-year run.

Jack O’Connor introduced the Winchester Model 70 Featherweight in the October 1952 issue of Outdoor Life, along with what he called “a mysterious new cartridge, the .308 W.C.F.,” which we now know as the .308 Win. The new Model 70 Featherweight featured a slimmed 22-inch barrel, an aluminum buttplate, and aluminum trigger guard and hinged floorplate—two features that had been common in Europe for years according to O’Connor.

He describes the new and lighter Featherweight model with anticipation, and understandably so. His humorous description of the standard Model 70 compares it to “the brick edifice in Mrs. Kelly’s backyard.” Considering that a standard Winchester Model 70 outfitted with a scope would weigh 10 or 10.5 pounds, the prospect of lighter rifle was a big deal.

The Model 70 has cycled through various changes and many iterations over its nearly 90 years of production, and the fact that we still have them is a testament to its staying power. For many decades, it was the rifle by which all other factory bolt-action, big-game rifles were measured by. To some, it still is.

So, what is the state of the Model 70 Featherweight today? That question arose when I dug my dad’s old 1982 Model 70 Featherweight XTR chambered in .270 Win. out of his gun safe this summer, with the intention of shooting a moose with it—a hunt that didn’t pan out as I hoped. I’d killed some coyotes with my dad’s old rifle when I was a kid, but aside from that, it had never seen much use. Stretching the legs on that old shooting iron made me want to see how the current production model compared. So, I requested a current Model 70 Featherweight in .308 Win. and was excited to put it to the test.

You’ll often hear folks talk about pre-64 Model 70’s, and how they’re better than anything that’s been put out since. Most of those people probably couldn’t tell you exactly what was so great about the pre-64 Model 70’s, but they’ll come to blows with you to defend this belief. They certainly were quality rifles, and O’Connor referred to the pre-World War Two model 70’s as the “best factory big-game rifles ever turned out.” There is a tapestry of details that could be unwoven on the subject, but for the sake of brevity, we’ll just stick to basics.

Prior to 1964, the Model 70 had a Mauser-style controlled-feed action and blade ejector.

The “new” Model 70 introduced in 1964 was cheaper to produce and made the switch to a push-feed action with a smaller extractor and plunger ejector like what the Remington Model 700 uses. This change was partly spurred by competition from the Model 700 and Savage Model 110, which were good rifles and cheaper to produce than the venerable Model 70. I don’t think that Jack O’Connor was ready to trade in his collection of “slicked up” pre-64 Model 70’s, but in his introduction to “Winchester’s New Model 70” in the March 1964 issue of Outdoor Life, he wrote about it positively.

O’Connor pointed out that this push feed action was actually stronger than the old Model 70 action due to the pre-64’s coned breech—something that was inherited from the 1903 Springfield and is still present on some modern controlled-feed actions like the Kimber 84M. This leaves the case head unsupported, whereas the recessed bolt face of the push-feed model encapsulates the case head and the front surface of the bolt butts against the rear of the barrel.

Being of 1982 vintage, my dad’s old Model 70 Featherweight has a push-feed action and is an early model featuring what is now the iconic Schnabel fore-end. That and the classic Featherweight cut checkering give the rifle its signature look, which began in 1981.

Dad’s rifle has the aluminum bottom-metal that the pre-64 Model 70 Featherweights had, and the same barrel length, contour, bolt angle, and three-position-safety. Although I don’t have a pre-64 Featherweight for comparison, I found it interesting to compare the features in the modern production Featherweight to one that’s older than I am.

The current production Model 70 Featherweight (like other contemporary Model 70’s) has gone back to a pre-64-style controlled feed action—coned breech and all. Shooters like to dote on the controlled-feed action as being more reliable, but push-feed actions are perfectly reliable as well.

Many shooters like the blade-style ejector, which is simply a stop that ejects the case with a force proportional to how hard you’re pulling back on the bolt. When shooting on the bench, it’s easy to hand-pick spent cases from the bolt face by slowly drawing the bolt to the rear and pulling them from the action. The plunger-style ejector on the 1982 Model 70 Featherweight ejects cases reliably and with authority, but ejection isn’t as controllable as with the blade-style ejector.

Although the trigger on the old Featherweight has no creep, it’s a simple trigger mechanism that’s painfully heavy. My Lyman Trigger Pull Gauge breaks it over at 5 pounds, 15 ounces. The trigger shoe is wide, ribbed, and otherwise comfortable.

The current production Model 70 Featherweight has Winchester’s MOA trigger system. It breaks crisply at 4 pounds, 2 ounces as set from the factory. This trigger also has no perceptible creep, and virtually no overtravel. The trigger shoe is also wide and comfortable, but smooth.

How the Past and Current Model 70 Featherweights are the Same

Besides the style of bolt and the updated trigger mechanism, the two rifles are nearly identical on the surface. The new Featherweight maintains the look, lines, and parts of the classic Featherweight design. The knurled, rearward-pitched bolt handle, the stepped-down barrel contouring just forward of the receiver, pistol grip cap, and look of the aluminum bottom-metal are virtually identical, except that the current production model has been improved with a one-piece design. The 1982 production rifle’s floorplate and hinge were separate from the trigger guard and used three action screws instead of two.

I don’t bemoan the fact that most modern hunting rifles have synthetic stocks. They’re more durable, stable, and weather-resistant. Generally, I’d never seek out a wood-stocked hunting rifle to use here in Alaska. However, I’m glad that Winchester has kept the iconic Walnut stock on the Model 70 Featherweight. It wouldn’t be a featherweight without that stock.

I noted a few differences in the stocks between my current production and 1982 vintage Featherweights. The most obvious was the finish. The old one has a glossy finish that gives the wood a reddish hue, whereas the satin finish on the current model is a little more subtle and brown.

The new recoil pad is obviously better, but the woodwork on the new stock is slightly less refined and a little clunkier than on the 1982 model. The grip and fore-end are slightly thicker on the current model, and the bottom of the stock is somewhat “cornered off” around the hinged floorplate. The 1982 stock has a little more wood removed around the grip and a more comfortable feel for one-handed under-action carry. Part of the Featherweight’s appeal is to not only be lighter, but to feel lighter and nimbler—a feeling that a slightly less-refined stock can negate.

However, the current Model 70 Featherweight stock is better in some ways. The inletting around the floated barrel is much more even. Whether due to time or conditions, I had to do some sanding to the barrel channel on the 1982 Featherweight to eliminate contact with the barrel.

The overall wood-to-metal fit is better on the contemporary model as well. The fit of the wood is tight and even around the tang, ejection port, receiver, and bottom metal—much better than what you’ll see on most production rifles with synthetic stocks. The only gap I could find was on the port side of the barrel, just forward of the receiver, but the rest of the inletting is good, and the barrel is completely free-floated.

Accuracy of the Winchester Model 70 Featherweight

I never knew my dad’s old Model 70 Featherweight to be an accurate rifle. With its un-bedded wood stock, paper-thin barrel, and heavy trigger, it’s a few fries short of a Happy Meal when it comes to precision and repeatability. Still, after floating the barrel, re-sealing the stock, and making sure the action screws were torqued to spec, I tested several types of ammunition in the old .270.

My best accuracy with the 1982 Model 70 Featherweight was with new production Remington Premier 130-grain Swift Scirocco. The rifle averaged 1.4 MOA for three-shot groups but blew up to 2.6 MOA with five-shot groups.

I tested the current production Featherweight more extensively and recorded 21 five-shot groups with 11 different types of ammunition. The two most consistent loads for this rifle were Federal Premium 180-grain Trophy Bonded Tip (1.9 MOA average), and Hornady Superformance 150-grain SST (2.0 MOA average). Other loads turned in a tighter group or two but were not as consistent.

For an accuracy average, I followed the same guidelines that we use at our annual gun test, by averaging the top 10 five-shot groups recorded for the rifle. This gives a realistic picture of what the rifle’s accuracy potential is with factory ammo.

The average accuracy of the Winchester Model 70 Featherweight in .308 Win. was 1.79 MOA.

In his Featherweight introduction in 1952, O’Connor mentions that he shot groups from 1.5 inches to 2.25 inches, and only shot one group that was under 1 inch at 100 yards. He didn’t specify whether he was shooting three or five-shot groups.

Although ammunition has improved, the current production model still has a pencil-thin barrel and only partially bedded wood stock. Everyone seems to expect sub-MOA performance these days, but the accuracy of this rifle is perfectly capable for any hunt you would take it on.

What the Winchester Model 70 Featherweight Does Well

The current production Model 70 Featherweight is a quality flagbearer for this iconic lineage. Even with some changes in the past 70 years, you can still tell it’s a Featherweight with a single look.

Where the Winchester Model 70 Featherweight Could Be Better

I’d like to see just the slightest bit more refinement and attention to detail on the stock, particularly a slimmer fore-end, more smoothly rounded edges on either side of the floorplate, and a little bit thinner pistol grip.

Read Next: Do Accuracy Guarantees from Gun Companies Mean Anything?

There are always things that a true Model 70 snob can get wrapped around the axle about, but overall, Winchester is still turning out an excellent rifle. The Featherweight is a rifle that’s generally true to its roots, and instantly recognizable for what it is. It boasts some modern features and improvements over older models, and shoots accurately enough to be a highly effective hunting rifle.