Medium-rare without fail and a delicious post-hunt meal. 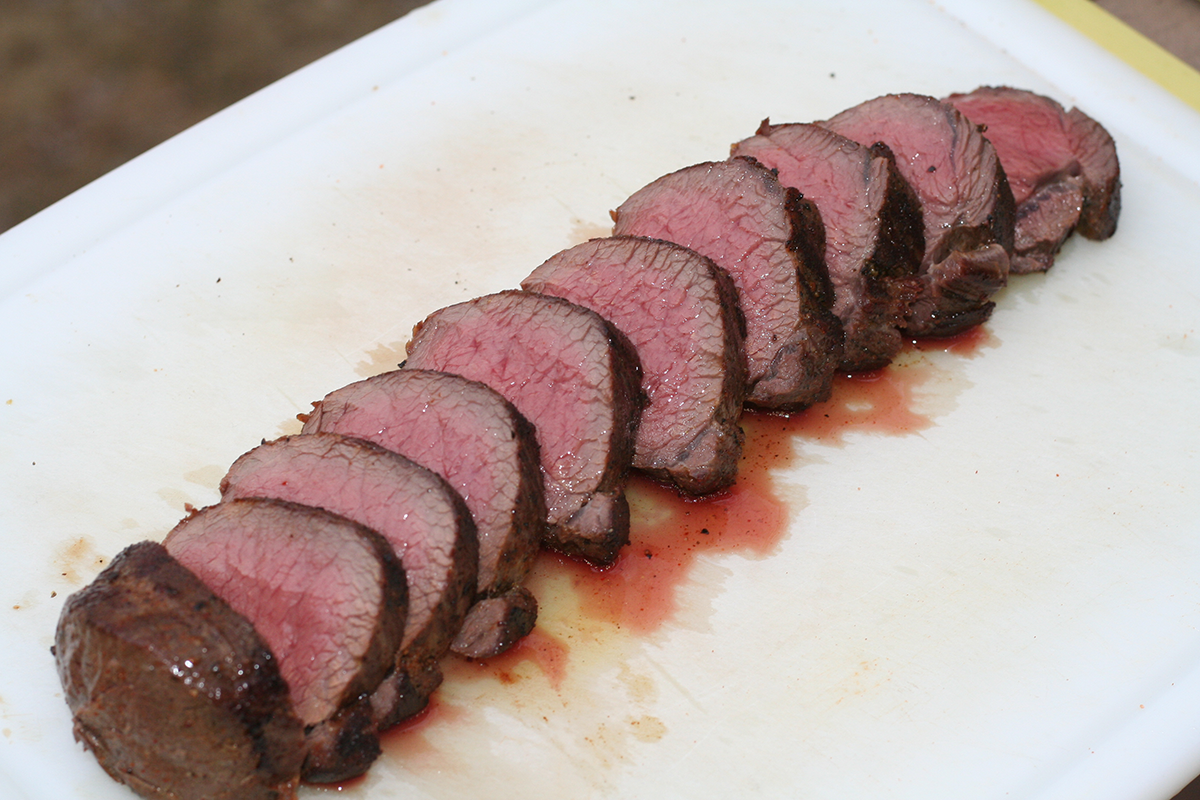 Most people who have cooked venison have at some point left their venison steak or chop on the heat too long, and ended up with a dry hockey puck that was barely edible. This is not necessarily an indictment of their cooking skills, but rather an example of just how fragile venison can be when cooking it.

The difference between meat cooked to 130 degrees and 165 degrees is only a matter of minutes. I have seen venison cooking recommendations that suggest that all venison be cooked to 165 degrees, and I would never discourage anyone from taking the safe road. If you choose, however, to live life on the edge because you prefer venison medium-rare (or, as I prefer it, rare), hitting that magical 125-130 degree temperature range can be difficult.

How to Cook Venison the Right Way Each Time

When cooking venison backstrap, for instance, cutting it into chops or medallions will reduces cook time to a matter of minutes. This is why I prefer to leave my backstraps in large, whole pieces so that I can maintain some control. When grilling a large piece, I leave it on the grill for about 4 minutes per side on the direct heat, then move it to the top rack for about 5 minutes to finish. This usually gets me pretty close to what I want, but there’s still a lot of room for error and overcooking.

A more controlled method is to sear the backstrap in a pan with butter, then move to a 350 degree oven for about 8 minutes. Again, this will get me close, but depending on the size of the backtrap there is still too much room for error. Sure, I could throw a thermometer in there and monitor the internal temp of the meat and that would tell me what I need to know and get me close to exact on my 125-130 degree preference. But you still run into the problem of taper: this is where the back strap is larger on one end than it is on the other and you don’t get and even cooking temp throughout the meat.

This is where fancy gadgets and good friends can be helpful. For my birthday this year my buddy Shawn Bergeth got me an Anova Precision cooker. It’s also called a sous vide, which is a French term meaning “under vacuum.” The basic gist is that you can vacuum seal what you want to cook—meat, fish, fowl, eggs, and vegetables—and then submerge it in a water bath set to an exact temperature. This is an old restaurant technique that has become very popular in the last few years.

For my first try with the precision cooker, I thought I would go right to the venison backstrap and attempt to produce a perfectly rare piece of meat. I seasoned the meat with salt and pepper and sealed it in a vacuum bag. I set the temperature to 122 degrees, dropped the meat into the water, and left for four hours.

When I got home, I cut open the bag, seared the meat in a cast-iron pan for about 90 seconds on each side, and then let it rest for 5 minutes. (The searing raised the temp a few degrees, which is why I set the water bath at 122 degrees.) What I ended up with was a rare piece of venison that hit 128 degrees and was as tender as any piece of meat I have ever had. I served it up with a little bourbon cream sauce and some roasted potatoes.

I think it worked wonderfully, especially considering that was my first time using the gadget. The really nice thing is that if you wanted it to be more toward medium, you could set the temp at 130 degrees and then sear, and that would get you up around 135.

You could also follow the recommended food guidelines and cook it to 145 degrees, but that is just a bit overdone for my tastes. I am really looking forward to giving this thing a try on other cuts and a variety of fish and game. ––JC

Hunters have been sharing their venison since venison was discovered. We share it among ourselves (the hunting party) and hand it out to friends and relatives (in the spirit of community). We share venison for all kinds of reasons not the least of which is to create good will toward hunters. And it works; research clearly shows that the majority of Americans support hunting (77 percent) especially when it is done for food, not sport or trophy taking.

Some of us share our kill hoping that it will help bring new hunters into the fold. We serve up a fine dish of venison and go on about how venison has fewer calories than beef and far less cholesterol, and how it’s a great source of protein and is every bit as tasty as beef. We tell anyone within earshot how hunting funds wildlife conservation and how good hunting is for both the hunter and the animals we hunt. We offer to take them out to the range next summer and get them off to a good start. That’s the rap. We run it (or at least we should), because our numbers are dropping precipitously. We need numbers, because no hunters means no wildlife and no more hunting. It’s about that simple.

The trouble is, it doesn’t work—at least it hasn’t for me. I have been sharing my venison for damn close to half a century and I can honestly say the number of hunters I have recruited by passing around deer meat is … zero. It’s not that I can’t cook the stuff, or haven’t shared some of the best cuts, but all I have accomplished is turning a bunch of people into venison lovers.

For years I’ve been passing out venison to folks who had no interest in ever taking up hunting. Their lifestyles were already fairly well set and hunting had no place in them. They golfed and played tennis and ran 5K’s and went to football games and went to work every day and came home. They didn’t care much about where their food came from or how it was produced. Try as I would, I just couldn’t turn these venison eaters into venison hunters.

I either had to develop a new recruitment pitch or find a new audience to pitch it to.

A few years ago I started hearing about a new movement that emphasized healthy living by eating locally grown foods — fruits, meats, and vegetables that were not degraded by long distance shipping, premature harvest, and genetically modified for shelf life and appearance over taste and nutrition. Local, natural “grass-fed” beef was a favorite as was organically grown pork and free-range chickens and natural brown eggs. Growth hormones, chemically enhanced feeds, genetic engineering, food factories, long distance shipping, and UPC codes were out.

These folks were referred to as “locavores” as they tried mostly to eat and buy foods from local sources. They brought the concept to life roughly ten years ago and it has been growing in leaps and bounds ever since. Farmer’s markets featuring locally produced foods in season are booming, supermarkets have special sections for locally grown foods and chemical-free natural meats are flying off the shelf at premium prices. My pitch radar was on high alert. Maybe these were the kind of folks who would get the connection between venison and healthy living/eating. It was worth a try.

In the middle of wrapping my mind around the locavore concept, I had a conversation with young hunter who lives in New York City about the difficulty in recruiting new hunters. She mentioned how she recruited a new hunter simply by cooking a few meals of venison for her. According to my friend, the key to recruiting the new hunter was in helping her understand where venison fits into her life philosophy. The recruit was eager to learn about the health benefits of venison and very much into the concept of forging a link between herself and the foods she ate. The concept of hunting and harvesting her own food was very appealing to this young lady who was a self-identified locavore. The concept of knowing where her meat came from and how it was transformed from a living breathing creature to table fare was highly attractive this young person.

The young woman asked to accompany my friend on a hunting trip and see first-hand how the circle of life is completed. None of the folks I had supplied venison to gave a damn how their food got to their table or what it ate or how it was killed. My eyes were opened, the dots connected, and I was sold. I had been talking to the wrong people for the past 50 years. I needed to find me some locavores who really cared about the food they ate. That would be the venison/hunting connection.

A pair of after dinner talks at last year’s National Deer Alliance Deer Summit in Louisville sealed the deal. World-famous lecturer and conservationist, Shane Mahoney mesmerized the audience with his perspective, which centered on the importance of fish and wild game as important food sources to the future of an ever-growing North America. Noted author and TV celebrity, Steven Rinella elaborated on the importance of hunting wild animals and killing what you eat was critical to the psychological make up of man, the meat eating hunter. They were preaching from the same hymnal, just different verses.

So, I’ll be doing my part this year by sharing my extra venison with not only the hungry but the locavores as well. My neighbor can eat cake—it may improve his golf game. ––CD