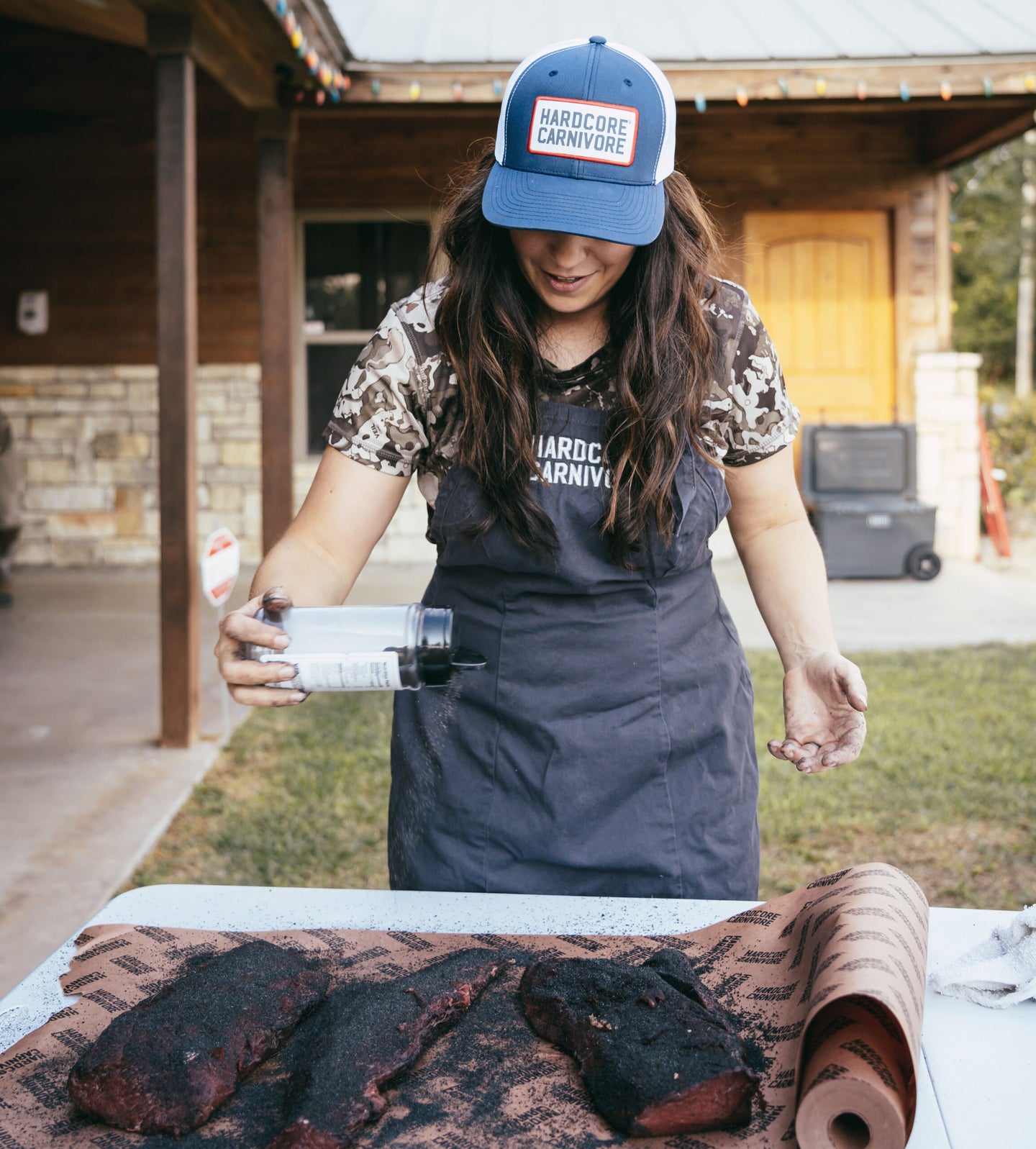 Jess Pryles is still learning how to deer hunt, but she’s an expert once a whitetail hits the Texas dirt. Originally from Australia, where she never was exposed to hunting, Pryles now lives in Austin, one of the meat capitals of America. She always loved eating beef steaks, but didn’t know much about cooking one properly. So Pryles decided to teach herself how to prepare all kinds of cuts. These days she runs a flourishing meat seasoning business called Hardcore Carnivore.

Pryles took up deer hunting after moving to Texas. She had toured slaughter houses to see how cattle were processed and decided that if she was going to eat wild game that she needed to see how that worked as well. So she went hunting a ranch at the invitation of a local family. Pryles has a very exact process for taking meat from the field to the grill. It ensures that the venison is cared for properly and tastes incredible (I can attest to that after eating an elk backstrap she prepared after a traditional Texas dove hunt). Here’s her method.

Pryles used to bleed out all of her deer kills, but says she doesn’t do that anymore because it doesn’t enhance the taste of the meat. It was once thought that bleeding improved meat taste by cooling the carcass, but after she attended several meat science classes at Iowa State University, Pryles realized that draining the blood had little to do with temperature loss, and that gutting is a more significant way to start the cooling process. She says gutting an animal quickly is the best way for any hunter looking to improve meat taste. She guts all her deer first before skinning them out. Some deer hunters never take the guts out of their kills (just straight to skinning), but in the Texas heat it’s a necessity so the meat does not become too gamey or spoil. And since meat cools from the inside out, removing the guts is vital.

Backstraps and tenderloins come off first, and then Pryles will quarter out the deer. She also sawzalls out the ribs. Most of the low-fence Texas deer she has shot don’t have much meat on their ribs, so she will either roast or smoke the ribs and make a stock out of them once the butchering is done. She also makes a stock out of the neck and then picks the meat off it to use for venison dumplings.

Pryles cuts all the silver skin off her venison and trims it before storing it in vacuum-sealed freezer bags. She suggests getting the meat in as cold a freezer as possible. A quicker freeze preserves the quality of the meat. Pryles removes the hams and shoulders, then breaks them down further to remove cuts like flat iron steaks. One of her favorites is the teres major, a muscle that connects the shoulder blade to the front shoulder. It is seldom butchered by most deer hunters, but should be, as it is nearly as tender, and much more flavorful than the tenderloins.

The remainder of the deer meat gets cut into stew-sized pieces. She doesn’t grind any of her meat initially, because she says you can always make burger from the cubed meat later, but once it’s ground up, there’s no going back. Pryles also never makes her meat into breakfast sausage and freezes it, because there’s a good chance the meat won’t taste as good with the introduction of salt, which initiates the oxidation process and ultimately turns the meat rancid. So she only adds salt right before cooking. She says it’s just as easy to make breakfast sausage the morning of or night before, so don’t risk ruining your meat by making it all at once.

Read Next: The Best Ways to Cook Every Cut of Venison

You can try all kinds of Pryles’ venison recipes, but the easiest (and one of the most tasty) is simply grilling backstrap over an open flame. You need to get the charcoals burning hot. Make sure you pat the backstrap dry before seasoning it. Pryles uses her Hardcore Carnivore Black or Camo seasonings, which let the meat remain the star. You really do just taste the meat with these seasonings. It’s not like eating a restaurant steak or beef ribs where the dry rubs often become the focal point for your taste buds.

The key is not overcooking the meat, and if you have frozen your backstrap it’s smart to tie it up with cooking string once it’s thawed. If it’s been in the freezer it has likely flattened out and will cook more like a thinner piece of meat. The backstrap needs time to develop a good char on the outside, and it can’t do that if it’s flat. Pryles uses the JKF (just keep flipping) method in which she turns the backstrap every 20 to 30 seconds. This allows for an outer crust to build up without overcooking the meat. Once you get a good crust on the meat, move it to indirect heat and let it finish to an internal temperature of 135 degrees (you will need a thermometer), which keeps the meat rare and is the most flavorful way to eat it.

Let the backstrap rest for about 15 minutes once you take it off the grill so the meat can relax. Once it’s on the fire, the meat begins to tighten (you may notice your cheeseburgers get smaller once they are finished cooking, for example). It needs to relax so it’s not as tough and remains juicy. Make sure you cut against the grain of the meat when you serve it to ensure a more tender bite.