Use the whole muscle method to make tender, tasty jerky 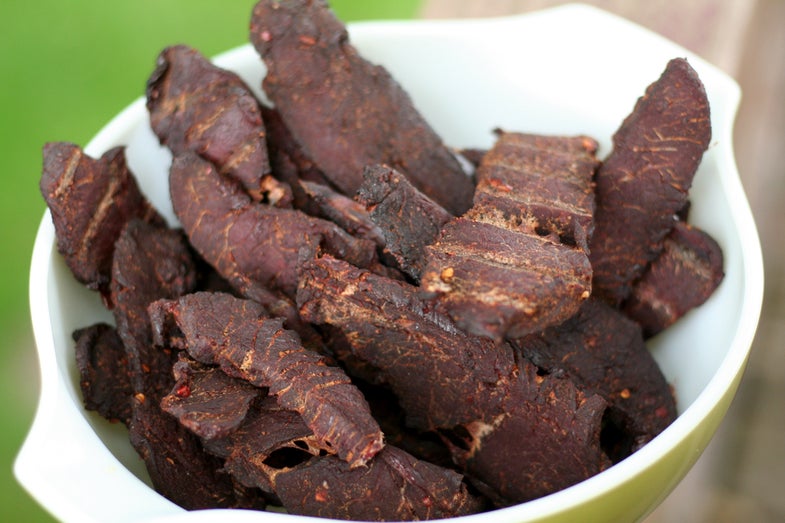 I have never been a big fan of making jerky with my wild game. Part of the reason for this is that whenever my dad would kill a deer, he would take the whole thing to a processor to be turned into jerky, pepper stick, and summer sausage. I had my fill of it as a kid. So when I started hunting on my own and was able to kill a deer, I wanted to try every other possible way to prepare venison.

But I have had a few very successful hunting seasons, and when the freezer starts to fill up, making jerky makes more sense. There are, generally speaking, two forms of jerky: ground and re-formed jerky and whole muscle jerky.

The ground jerky is just burger that’s seasoned and pushed through a jerky gun to make strips or small round tubes. Most years, I turn all of my ground burger into sausage, or my wife uses it to cook with her dishes. As far as whole muscle jerky goes, I have always felt like devoting a leg roast to it was far down on my list of priorities. There are so many great ways to use venison that I end up not making jerky.

My other issue with jerky is that it always seems too salty, and overpowers the flavor of good dried venison. I’m sure we have all been handed a stick of jerky that was either over dried or so salty you could barely choke it down. Either way, you needed to drink a big glass of anything just to wet your mouth again. In my book, good jerky should be slightly chewy and not over-seasoned that you can’t taste the meat.

But all that aside, I decided to give jerky another chance. Back in July I got a new Traeger smoker and have been using it on everything I can. I was curious how it handled smoking meats at lower temps, and figured I’d have to make some jerky. I mixed a marinade and sliced up a venison top round roast. To do that, I used a favorite trick of mine for slicing meat: When you thaw a cut like that, let it thaw for only about 4 or 5 hours, so that it is still slightly frozen in the middle. The roast will hold its shape a little better and make it easier to slice. I used a 2-pound roast with a wet marinade. I don’t use any extra salt in the marinade because the soy sauce and Worcestershire contain plenty of sodium. The end result was a well-balanced sweet and salty marinade that let the flavor of the meat come through. Here’s how I made it:

Directions Slice the venison roast into pieces about ¼-inch thick. Mix the marinade together and toss with the meat. Let the meat sit in the fridge overnight. Place the meat in a smoker or on a pellet grill. Smoke at around 180 degrees for 4 to 5 hours. Check your jerky after four hours to see if it is done. It should be chewy, but not tough to chew. Enjoy!