Hunting Class is Now in Session

Can a novice learn to hunt, shoot, butcher, and prepare wild game in a single long weekend? 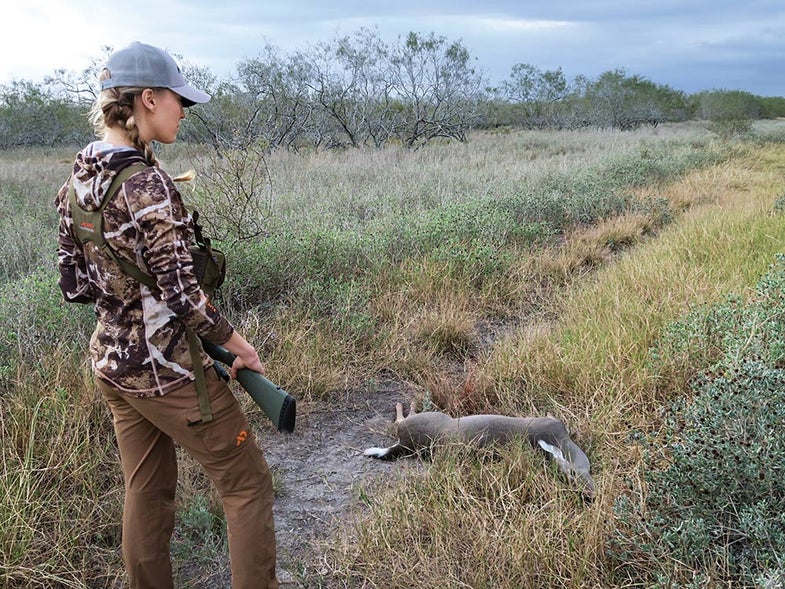 She was supposed to fall where she stood. That’s how I’d pictured it back in Massachusetts, unreasonably confident as I let slip references to my planned whitetail hunt in Texas to my bewildered New England friends. But it didn’t go that way. Instead, she bounded 20 yards past mesquite and prickly pear and lay kicking in the salt grass. A final spasm of white 100 yards away, 20 seconds after I was sure she should have finished. My stomach dropped straight through the 30-foot blind. I had punted it, I knew right then. I had taken a 5 a.m. flight the previous morning from Boston to Harlingen, 20 miles from the Gulf Coast and the Mexican border, for a weekend course in hunting, butchering, and cooking wild game—and I’d screwed it up. Hunting had drawn my interest only months earlier, after going out West to write about public-land issues. I was, frankly, impressed by the sportsmen holding the line against development and big oil, and their grounded conservation ethic. I was hungry for it, too. At the annual Backcountry Hunters and Anglers meet-up in March, I’d been served a wild-game dinner that transcended description: moose consommé and bighorn risotto and other dishes I still crave. The trouble was coordinating with the handful of far-flung sportsmen I knew well enough to take me out and teach me. So when the opportunity came up to escape the cold in Massachusetts and get started with a From Field to Plate (fromfieldtoplate.com) course last November, I bit. It wasn’t how I’d meant to begin—much of what drew me to hunting centered around this seductive idea of grit and the sportsmen’s equivalent of earning your turn. I didn’t, to be honest, see a ranch and tower blinds in that picture. But the course, designed to quickly initiate new hunters into the shrinking ranks of the country’s 11.5 million, promised to fast-track first-timers straight to the part that interested me as much as anything: the meat.

My field instructor, Darren Jones, ran his five students through range practice on the 1,900-acre Gonzales Ranch as soon as we rolled up, the first time many of us had shot a rifle.

In the thickness of a tropical Texas evening, he had us rehearse a rich, raspy yoga breath, as though trying to inhale soup (one slow drag in, one controlled push out) to land us steady in our kill zone. I had unloaded just three rounds of 6.5 Creedmoor with my Ruger American Varmint Rifle, capped with a SilencerCo Omega suppressor, each one striking dead center. When I hit the sheets that night, I thought of the good friends I’d pictured coaching me through my first, hard-earned hunt. At the same time, I was feeling stupidly pleased with myself.

My fourth brass casing dropped just after 7 a.m. the following morning, along with my doe. I was too concerned that I’d blown it as we walked up on her to think of a thing to say. My doubts were shouting at me as I racked in a fresh round: You shouldn’t have tried to take a shortcut; you got greedy; you should have drilled with dry-fire; no wonder you couldn’t hit a broadside deer out of a blind. I’d come all this way, I thought, only to stand ridiculous in a friend’s camo over a pitifully small, corn-coaxed deer that I’d failed to take cleanly.

There was something unexpectedly moving about the trail of lung tissue in the grass, and then how still she was. Looking her over, I breathed into the realization that the shot was right where it was supposed to be. Darren pulled me in for a hug and then stepped back to let me take a minute alone with my animal.

“Do you mind if I do this?” asked Darren, as he dipped his pinkie in the exit wound. “I did it for my daughter after her first deer.” He daubed my cheeks, forehead, and chin with the blood of the doe. If you had described the gesture to me a day earlier, it would have sounded absurd. But standing with the weight of my actions, it came home as a sweet acknowledgement of the threshold I’d crossed.

I still wasn’t entirely convinced that I had done him proud until an hour later, back at the ranch house, where our butchery instructor, Jeremiah Doughty, showed us how to slice open the superficial fascia and release the guts. I could count up to the bullet hole, neat between the fifth and sixth ribs, and see for myself that her heart was gone.

I was oddly relieved to be responsible for taking my deer apart. Never hand off your meat to a processor, Jeremiah cautioned. He’d seen way too many butchers lump all their patrons’ takings together and waste huge sections of the animal.

For half the day, we stood in a walk-in cooler with our deer strung up by their Achilles tendons, trying to follow Jeremiah’s decisive cuts, eager as medical students. He showed us how to gingerly remove the cellophane of caul fat and talked us through soaking the liver to remove the bloody taste. I wasn’t under any illusions that dressing would be this straightforward in the field, but it was also more hours of back-aching work than I could have imagined.

Read Next: A California Girl Goes Turkey Hunting in Texas

At dinner, we ate the venison Wellington we had cooked together. When it comes to my appreciation of food, I have to struggle hard against cliché, so all I’ll say is that that meal was the closest I’ve come to a spiritual experience.

Writing this back in Boston a few days later, all I’m left with are the smells. To celebrate and honor my deer, I gathered my friends for a mess of liver pâté, spicy meatballs, Polish stew, and seared tenderloin with blueberry sauce. As the shoulder meat relaxed into its bath of wine and butter over a low flame, the house was rich with the aromas: dry grass and the sea and death and Texas. I was down the rabbit hole, stomach first. It might not happen this coming fall, but I was already planning: next, an elk.