Hunting in Paradise: Chasing Hogs and Deer in Hawaii

Chasing game in Hawaii leaves plenty of time for the beach 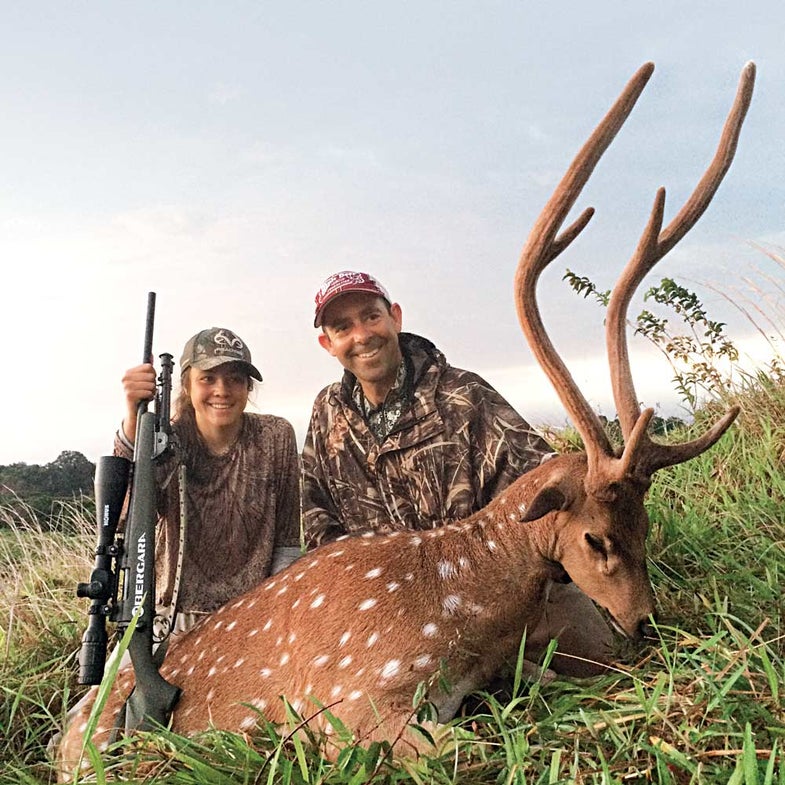 The author and his daughter, Iris, with a fine axis buck from the island of Maui. Andrew McKean
SHARE

For a 13-year-old girl, my daughter, Iris, has a fair amount of hunting experience. She’s killed both mule deer and whitetail deer, as well as pronghorns, near our home in Montana. So when I asked if she’d be interested in joining me on a deer hunt in Hawaii, she jumped at the chance to take her hunting skills and interest on the road. But her initial questions weren’t about the species of deer we’d be pursuing, or the type of terrain we’d be hunting. It was about Hawaii’s more typical attractions.

“Can we snorkel? Can we visit the beach? Can I wear my two-piece swimsuit?”

The hunting would be cool, she said. But if she missed a week of school to visit Hawaii and didn’t go swimming, there was no way her friends back home would let her forget it. Ah, the joys of being the father of an adolescent girl.

Luckily for both of us, this was a trip that allowed us to do it all: swim, snorkel, and lounge on the beach in the mornings, and then hunt axis deer and hogs in the afternoon and evening in the interior of the island. We’d be headed to Maui, where my friends Chad and Marsha Schearer have hunted for years and have figured out a daily ritual that accommodates almost any interest. The Schearers would be bringing their son, Wyatt, and a friend of his, so Iris would have the company of hunt-minded teenagers.

Besides spending quality time with my daughter, my interest in the trip was to use the rifle that won Outdoor Life‘s top award in the 2017 Gun Test, Bergara’s B-14 HMR. That designation stands for Hunting and Match Rifle, but Chad Schearer, who runs media relations for Bergara, brought field versions of the B-14, the Hunter and the Premier Mountain Rifle, both chambered in 6.5 Creedmoor.

We’d be hunting with Pat Fisher, whose outfit, Hawaii Safaris, is one of the oldest and most comprehensive hunting services on the islands. Fisher is based in Maui, but he also hunts the Big Island of Hawaii, Molokai, and Kauai for axis deer along with feral sheep, boar, feral goats, and mouflon sheep.

Hawaii has no native big-game populations, but successive generations of visitors have brought animals here, starting with the Polynesians, whose pigs escaped into the bush, and continuing through to Europeans, who introduced goats, sheep, more hogs, and even black-tailed deer. Axis deer, native to Asia, occupy much of Maui as well as Lanai and Molokai. Ancestors of these deer were given as a gift to Hawaii’s King Kamehameha V from Hong Kong back in the 1860s and released on the island of Molokai. Since then, they’ve been introduced on Lanai and Maui. Because there are no natural predators—the only non-human deer predators on the islands are packs of wild dogs—axis deer populations on Maui increase by about 25 percent every year. Many landowners, especially those who raise hay, sugarcane, and other agricultural crops, consider the deer to be pests. That’s where Pat Fisher and other hunting outfitters come in. While some visiting hunters successfully hunt patches of public ground around the islands or get permission to hunt private land, most opt to leave the logistics to locals and arrange for a hunt with Fisher or another guide who has permission to hunt private land.

Read Next: A Hawaiian Spearfisherman Survives a Brutal Shark Attack

That’s exactly what Iris and I did. We drove with Fisher up rutted dirt roads to cattle ranches with property on the flanks of Haleakala, a volcanic peak that dominates the island. The countryside here is a mix of eucalyptus groves, cattle pasture, and deep canyons lined with brush, where deer bed in the daytime. In the evenings, just like elk in the mountains back in Montana, deer emerge from cover to feed. And that’s how I intercepted a big buck, still in velvet.

Axis bucks, dappled with fawn-colored spots and adorned with high, forking antlers, are lovely to look at and they are delicious to eat. I wanted to bring as much venison home with us from Hawaii as possible, so we quartered the deer in the field and, because we were far from roads, packed the meat and antlers back to the truck. Fisher hung it in his walk-in cooler. Before we left Maui, we butchered the deer and stuffed venison in soft-sided coolers and our checked luggage.

Next up was Iris, who had to choose between hunting deer or boar. Like any sensible hunter, she left her options open, telling Fisher’s guide, Nicholas Gilbert, that she’d take whichever gave her the best shot.

Iris is a good hunter, and she’s a careful shot, and she passed on deer that didn’t give her perfect broadside presentations. We made several stalks and looked over dozens of good bucks in a couple days of hunting a ranch that included a zipline that stretched over a deep canyon. It was a strange experience for us to stalk axis deer around the big wooden towers that earlier in the day had hosted screaming, gravity-defying tourists.

On our last evening on Maui, after she passed on a long shot at a big axis buck, Iris spotted a hog moving through tall grass. Gilbert got her set up on shooting sticks, and Iris anchored the pig with her 6.5. It turned out to be a giant boar—an old veteran, with one tusk busted off, ears tattered and scarred from fights with wild dogs.

“You are going to be the envy of every boy on Maui,” Gilbert told Iris. “The locals like to hunt deer, but they are obsessed with hunting boar, and you just shot a giant!”

Iris was pleased with her success. But as she posed for pictures with her trophy, she had two questions: “Can we take the meat home?” And, “Can we go swimming in the morning?”

Note that on many islands, seasons for deer, goats, and feral sheep are open year-round, but hunting is allowed only on certain days, generally weekends and state holidays. On many islands, there is no limit on axis deer taken on public land. Check local regulations and seasons at dlnr.hawaii.gov/recreation/hunting/.