It’s Never Too Late to Learn to Hunt

It was a question years in the making: Would you teach me how to hunt? 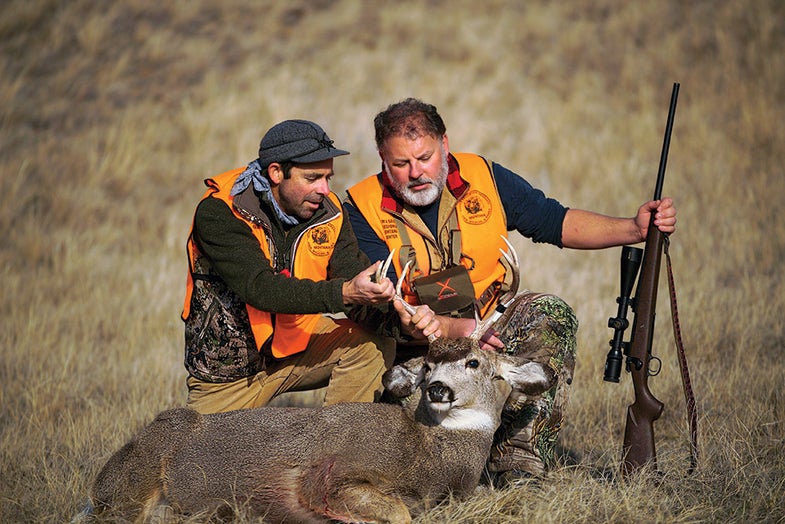 More than 11 years ago, I moved to Glasgow, Mont., in order to be closer to my daughter after her mother and I separated. In a small town like this, where it seems like everybody hunts, I got asked all the time if I did. “Not yet,” I’d say. “I’m waiting for the right person to show me how.”

Sometimes I felt like the only adult male in this town who didn’t hunt. I’d always had an interest in it, but I guess I missed out on being taught when I was a kid in Ohio. Then life started up, and it was just one of those things that I never got around to.

It’s not as though I lacked contacts or invitations, but most of the people who might have taken me hunting don’t do it the way I thought I wanted to. A lot of them drive around until they see something, and then they shoot it not too far from the road. I’m not saying everybody is like that, but I wanted to hunt what I guess I’d call the “right” way—walking and stalking an animal that doesn’t know I’m there, and feeling like I really earned it.

My day job—actually, it’s my night job—is working as a custodial engineer at our local middle school. I go to work at about 3 p.m. and work until midnight or so. Andrew McKean [Outdoor Life’s editor-in-chief] is at the school a lot; he coaches the middle school’s track and cross-country teams, and I’ve known him for a while. Our kids are in the same grades, and we’re friends on Facebook. I’ve seen posts from his hunts, and it seemed like he does it the way I’d like to. Maybe because he’s a coach, I thought that he’d be a good teacher. I thought about asking him a few times, but every time I got close, I’d get cold feet. We’re both busy, and I didn’t know how he’d react to a guy about his age asking him to be a teacher.

I finally popped the question last spring. I was actually pretty nervous—like a middle school boy asking a girl to a dance. I asked Andrew if he’d be interested in teaching me how to hunt. I think he was taken aback by the question, but he said he would, and that we’d figure out all the details before the fall deer season.

The truth of it is that I thought Andrew would get as much out of teaching me as I’d get out of learning, and that’s exactly how it played out. I passed the local Hunter Education class, probably the only 48-year-old who took it, and got a rifle—a Remington Model 700 in .30/06 that Andrew helped me pick out. He also guided me through the other gear I’d need: a scope, sling, bipod, ammunition, and binocular. I spent a good bit of time over the summer with that rifle, and learned how to shoot pretty well. Andrew was busy with his job and his kids, so he didn’t get a chance to teach me about shooting as much as either of us would have liked, but as it got closer to hunting season, we spent more time together at the range, and I think Andrew was happy when he saw I was a pretty good shot, and safe with the gun.

Andrew said he knew of some pretty good mule deer country we could hunt, and we agreed that we’d try to keep shots inside about 250 yards. I practiced a lot with my rifle, and got pretty comfortable shooting at that distance, although I really didn’t know how it would go when I didn’t have a solid bench to shoot off of.

The first day out, we encountered some deer—­including a nice buck—but they managed to get away before we could really settle in for a shot. It was a ton of walking, but there’s something about the way we did it—trying to sneak up on deer, and just hiking and glassing—that really suits me.

One of the unexpected things about hunting is that you can go as fast or as slow as you want, and it was fun glassing deer and figuring out a way to get closer to them. I was eager to kill a deer—I guess Andrew was anxious for me, too—but the cool thing is that we had time to talk and laugh and joke around. I was still nervous, but my nervousness and uncertainty about how it would end somehow made it even more exhilarating.

And I was learning things all the time, including about how not to skyline myself on a ridge, and about how to use dry stream beds to hide in. Andrew even taught me how to belly-crawl when we got close to deer. I have a bum knee—from an old ski injury—and that slowed me down, but I got pretty good at being sneaky.

A Swing and a Miss

On our second day, it all came together, although not before we had all sorts of blown opportunities. I missed a chip shot at a little buck. Andrew was cool about it. He said everybody misses, and it was something I just had to learn from.

Not 30 minutes after that miss, I spotted a buck bedded up a coulee, and Andrew had me figure out how to stalk up on it, keeping in mind the wind direction and the terrain. Somehow, it worked out, and I crawled to within 250 yards—243, to be exact—and waited for the buck to stand up. When he did, I shot and connected, and that part of the hunt was over. Andrew showed me how to field dress the buck, and we dragged him out together.

As we were getting my buck out, I kept thinking to myself, Why did I wait so long to do this? There are lots of reasons, but one is that I didn’t really know how to start, and I didn’t have anybody to show me the way to do it right. I think a lot of people are like me—interested and eager and capable—but they don’t know how to take the first steps.

People—including Andrew—have asked me why I want to hunt, and I guess it’s because of the meat. Natural protein. Andrew is wired the same way. That’s why he hunts, and he showed me how to skin and then how to butcher my buck. We trimmed and wrapped the meat in his kitchen, and he showed me the different cuts and how to cook them.

I was pretty nervous taking the meat from my buck back home. My wife isn’t all that jazzed about venison. But I cooked the backstraps for my 49th birthday dinner, and it was just perfect. Tender, tasty. Everybody in my household raved about the meat, and now they want more of it.

That helps make my case that now I need to go elk hunting. And that I need to teach my teenage daughter and my 8-year-old son how to hunt. One of the things Andrew impressed upon me is that now that I’m a hunter, I have an obligation to teach somebody else how to hunt. That makes sense. And I have a feeling I’m going to have just as much fun being a teacher as my kids will being my students.