A bighorn ram whose horns reportedly surpass the current world-record measurement has been found dead nearly a year after it... 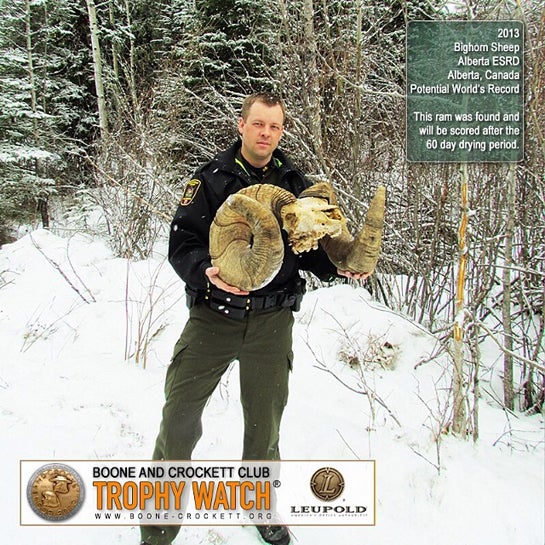 A bighorn ram whose horns reportedly surpass the current world-record measurement has been found dead nearly a year after it disappeared from the grounds of the famous Cadomin Mine property in Alberta.

The ram was officially scored last week at 209-1/8 inches net, with only 2/8 inches of deductions. That score exceeds the current world-record bighorn, also from Alberta, which scores 208-3/8. The Boone & Crockett Club announced on Saturday the official score and indicated plans to convene a full panel to score the ram—a condition required before bestowing world-record status—in the coming weeks.

For nearly a year, bighorn sheep enthusiasts and Alberta Fish & Wildlife officers had speculated about the fate of the big ram, which some hunters claim might have measured 215 inches on the hoof. The ram disappeared from view last spring, leading some to suspect it had been poached. It turns out the ram died from natural causes, or was taken down by a grizzly bear.

Fish & Wildlife officers found the skull this spring, and speculate that the 10-year-old ram died sometime in the spring or early summer of 2013, which means the horns may have been exposed to the elements for as long as 10 to 12 months.

Preliminary measurements are jaw-dropping. Both horns reportedly measure over 45 inches, and the first three radial measurements of the horn (rams are scored with four measurements) all exceed 15 inches, with the third quarter measuring 11-7/8 inches, according to the Wild Sheep Foundation’s Facebook page.

The Cadomin Mine (the name is a shortened version of Canadian Dominion Mining Company) is a former coal mine located in southwestern Alberta, on the western slope of the Rocky Mountains about 40 miles from the British Columbia border. The reclaimed mine property is one of the hot spots for trophy bighorns, and Alberta Fish & Wildlife issues only a handful of tags for Hunting District 438, which includes area surrounding the mine property. The mine itself is off-limits to hunting but is a favorite destination for wildlife photographers and a tight-knit group of record-ram enthusiasts.

The Cadomin property was last in the record-sheep news in 2009, when a giant ram that scored 206 inches was picked up. You can see images of that ram, and the terrain, in this Outdoor Life gallery.

The current world-record bighorn was taken in 2000 by Guinn Crousen on Luscar Mountain, Alberta, about 8 miles from the Cadomin Mine site.