Rifled vs. Sabot Slugs: Are You Shooting the Right Whitetail Load this Deer Season?

Traditional smoothbores allow you to hunt deer and other species with one gun, but for better distance and accuracy a rifled barrel and sabot slug are best 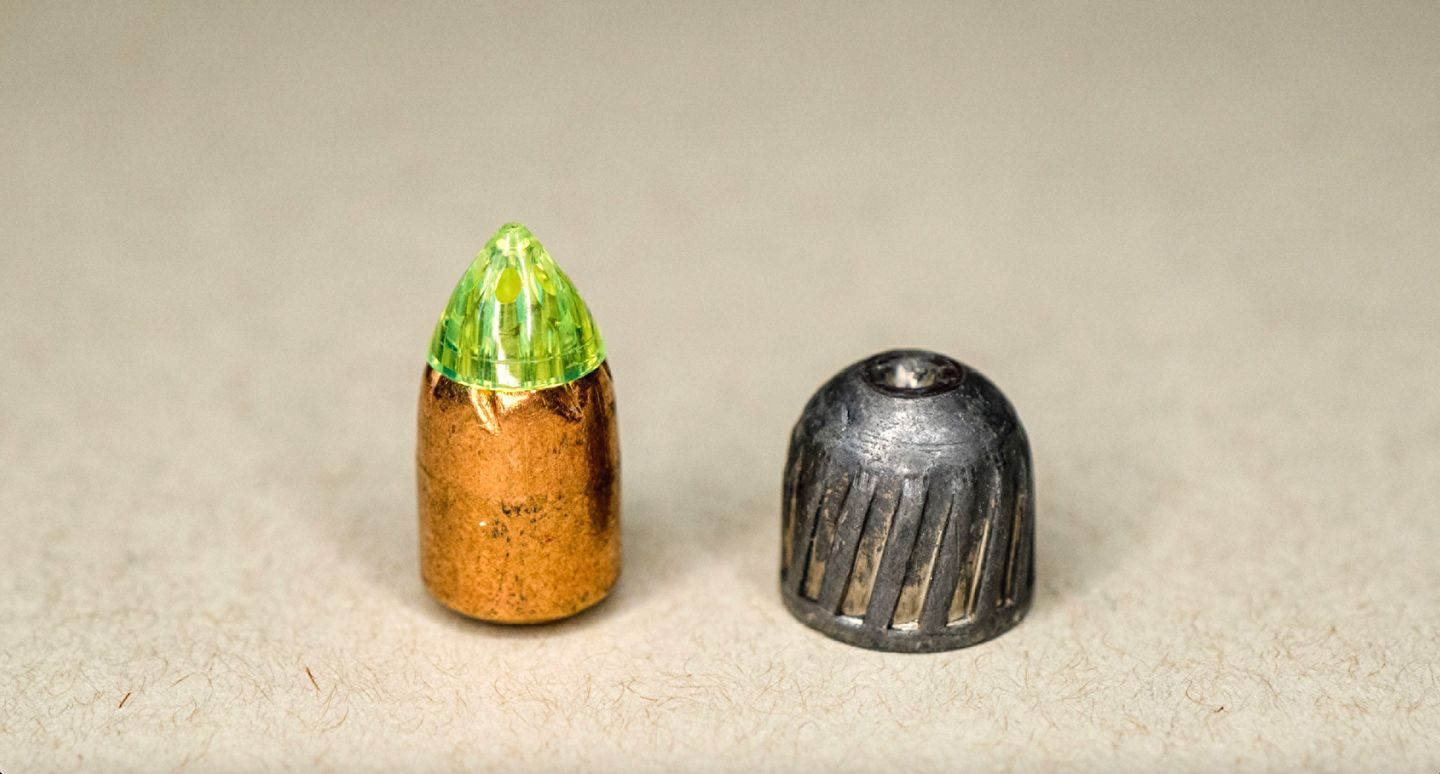 A sabot (left) will sustain its trajectory much longer than a rifled slug (right).
SHARE

More and more slug-gun states in the Midwest and East have legalized the use of straight-wall rifles during deer season in recent years. Straight-wall cartridges, like the .350 Legend and .45/70, give whitetail hunters superior accuracy at shorter ranges, making them safer to shoot than centerfire rifles in densely populated areas. But rifled and sabot (pronounced “say-bo”) slugs are far from outdated. Countless hunters in the middle of this country take smoothbore and rifled-barrel shotguns afield each fall, hoping to punch a tag with these short-range projectiles.

Both rifled slugs and sabots are ideal for the distances hunters aim to kill whitetails—typically inside 150 yards—in shotgun-only states. Their lethality has been well documented after decades of successful use in the deer woods. But there remains a long-standing argument among slug-gun hunters: Which projectile is best suited for killing whitetails? Over the years, the editors of Outdoor Life have shot a variety of rifled slugs and sabots from the bench and in the field and know well the capabilities of each load. If you’re trying to decide which round is ideal for your hunting style, here are the realities of shooting rifled versus sabot slugs.

The Difference Between Rifled Slugs and Sabots

Hunters using shotguns for deer—either by preference or mandate—can select between a smoothbore that uses rifled (also known as Foster-style) slugs or a rifled bore for sabot loads. A rifled slug has small helical grooves cut into the base of the projectile, but the slug does not have a specified twist rate like a centerfire round does.

There is some conjecture as to whether the vanes in a rifled slug cause the projectile to spin at all. So, I talked to long-time gun writer Dave Henderson, who has decades of slug shooting experience and a wealth of knowledge after a 55-year career of interviewing some of the foremost ballisticians in the country. He also authored a book, Shotgunning for Deer: Guns, Loads, and Techniques for the Modern Hunter, which details the innovations in slug technology.

“Rifled slugs have no twist rate,” Henderson says. “The slugs transit the barrel static and exit that way. There are photos from a manufacturer in my book that clearly show the rifling on the slug is worn smooth in the barrel and the slug never rotates. The slug’s accuracy comes from the extreme nose-heavy design, giving it the ‘rock-in-a-sock’ or [badminton] shuttlecock flight characteristic.”

The cuts are also there to allow the slug to pass through a choke tube safely. If the grooves were not in place, there would be more friction between the barrel and load, which would cause a considerable drop in performance or possibly result in a failure. The advantage with rifled slugs, of course, is that you don’t have to buy a special rifled barrel. You can use one shotgun to hunt deer, birds, and other small game.

“Rifled slugs may be fired in smoothbores or rifled barrels, with no advantage in either,” Henderson says. “The rifled slug sort of skids across the rifling in the barrel and exits the way it would a smoothbore.”

Sabot-style rifled barrels typically have twist rates that can fall between 1:18 to 1:36. For instance, the popular Ithaca Deer Slayer III and Savage 220 have a barrel twist of 1:24 (that’s one full rotation of the slug every 24 inches). But the Savage 212 has a 1:35 twist. Interestingly, former OL shooting editor Jim Carmichael found no statistical difference in accuracy between using a 1:28 and 1:32 rifled barrel in a 2008 slug gun test (more on this later).

“It’s the sabot slug that benefits from—in fact virtually requires —a rifled bore,” Henderson says. “The rifling grips the polymer sleeve(s) on the slug, imparting a stabilizing spin on the projectile while still in the barrel. In most cases the sleeve is discarded after exiting the bore.” —J.G.

Sabots can also be shot through a smoothbore with a rifled choke. Buying a rifled choke tube is a cost-effective way to use sabots in a smoothbore without incurring the expense of a completely new barrel. Sabots are streamlined bullets encased in plastic much like bird shot is loaded into a wad. When the round is fired, the slug remains in the plastic casing and spins down the barrel until the projectile leaves the muzzle. At that point, the sleeve and slug separate, and the projectile continues to spin as it travels downrange. Sabots are often polymer-tipped and sub-caliber, which translates to .50 in 12-gauge guns. By comparison, standard smoothbore slugs are between .72- and .75-caliber. —P.M.

Most 12-gauge rifled slugs weigh either 1 or 1⅛ ounces. Sabots weigh under an ounce, or 437.5 grains, and can range from 250 to 376 grains. Both hit hard enough to anchor any whitetail at a reasonable distance. But you will see more sustained velocity from sabot slugs. Sabots continue to travel at higher speeds for longer due to the aerodynamics of the projectile.

To confirm this, all you need to do is look at the trajectory of two 3-inch loads—Federal TruBall rifled slug and Federal Trophy Copper sabot—with a zero of 100 yards. The physical makeup of the projectiles is quite different, which drastically affects their performance downrange. TruBall has a weight of 438 grains and a muzzle velocity of 1,700 fps. Trophy Copper is lighter (300 grains) and leaves the muzzle 300 fps faster, at 2,000 fps. In the table below, you will see that TruBall’s trajectory dissipates more rapidly than Trophy Copper when both loads are shot out to 200 yards under the same conditions. —J.G.

A few years ago, during a lengthy range session, I shot 2¾-inch 1-ounce Federal TruBall rifled slugs from an open sight Benelli M2 and Winchester 2¾-inch 375-grain Dual Bond sabot slugs from a scoped Browning A-Bolt. At shorter ranges (out to 75 yards), there wasn’t much of a noticeable difference between rifled and sabot slug accuracy. But when I started shooting out to 100 yards and beyond, the sabot excelled.

During my day on the range, I was not shooting rifled slugs through a scoped smoothbore, which could have contributed to the inaccuracies. But I have done so many other times and found that the rifled slug simply won’t perform at distance like a sabot can. For instance, that 12-gauge 1-ounce Federal TruBall slug weighed 437.5 grains, compared to the 375-grain Winchester Dual Bond sabot. The TruBall slug also had a muzzle velocity of 1,300 fps compared to the Winchester’s 1,800 fps. Slower, heavier projectiles are going to drop faster and have a less effective range than a slightly lighter, but much faster one. —P.M.

Miller’s findings were confirmed by the ballistic data I gleaned from Carmichael’s test published in the October 2008 issue of OL. With the help of Randy Fritz, who builds the incredibly accurate Tar-Hunt slug guns, Carmichael tested 27 rifled and sabot slugs, shooting over 1,000 rounds from a 50-pound, remote-operated slug gun engineered by Fritz. Carmichael’s testing protocol called for five three-shot groups of each load out to 100 yards, though he did fire a few five-shot groups to confirm load consistency and the accuracy of the equipment.

The table below details the best 20- and 12-gauge groups from the four manufacturers—Federal, Remington, Winchester, and Lightfield— included in the test. Most of the loads Carmichael shot were sabots, but he did shoot two Winchester rifled slugs as well. You can see from the data that the sabot groups were much tighter than their rifled counterparts. —J.G.

Most of my experience with slugs—rifled and sabot—has been with 2¾- and 3-inch 12-gauge offerings. It’s my contention that a 2¾-inch is adequate for killing deer, and that a 3-inch load simply generates more recoil with a slight amount of increased velocity. I chronographed Winchester’s Elite 3-inch Dual Bond sabot and found the muzzle velocity increase in a Browning A-Bolt to be only 50 fps faster than the 2¾-inch offering of the same weight. Granted, velocities can fluctuate for a variety of reasons, including the physical makeup of the bullet, elevation, and weather conditions, but I’ve never found that extra quarter-inch to make a marked difference.  —P.M.

When I worked in Illinois, a shotgun-only deer state, I noticed many whitetail hunters selected 20-gauge sabot slug guns. So, I was curious about 20-gauge range capabilities and asked Hornady’s Seth Swerczek about it.

“I think 20-gauge sabot loads are popular because of their reduced recoil,” Swerczek says. “Both of our 12- and 20-gauge sabot slug loads offer honest 200-yard performance, so you’re really not giving up any effective range by opting for the 20-gauge.”

A 200-yard shot with Hornady’s 2¾-inch 20-gauge SST sabot might be pushing the boundaries of that load’s effectiveness, especially if the shot placement isn’t precise. But the 250-grain slug can kill a deer at 150 yards. According to Hornady’s ballistics chart, the SST has a velocity of 1,331 fps and 983 ft/lb. of energy at that distance. Dial your shot back to 100 yards and the same load produces 1,200 ft/lb. of energy.

What helped sell me on the 20, aside from reduced felt recoil, was an opportunity to hunt hogs with a scoped, rifled-barrel Winchester M1300 pump several years ago. The longest shot I made was close to 100 yards, and the longest shot I saw anybody else connect on—with the same setup—was just over 120 yards. At 100 yards, those 20-gauge sabot slugs seemingly hit with the force of a .250-grain .45/70 (it’s actually about a 250 ft/lb. difference in favor of the Hornady MonoFlex over an SST slug in a side-by-side comparison). Regardless, the terminal results on 200-pound hogs, considerably tougher to bring down than a whitetail, were spectacular. —P.M.

Read next: The 15 Best Shotguns for Deer Hunting

Pick a Slug or Sabot Based on How You Hunt

Which option you choose—rifled or sabot slug—will be subjective based on your hunting needs. From 75 yards and in (with the occasional poke out to 100 yards) a rifled slug holds its own compared to a sabot. But if you have any chance of a 100-yard-plus shot, a sabot is clearly a better choice in terms of accuracy and trajectory.

I did ask Swerczek which sells better, Hornady’s SST sabot loads or the company’s traditional American Whitetail rifled slugs. He confirmed sabots are much more popular. That’s not surprising since most hunters are interested in getting the maximum distance they can from their firearm. But also, a sabot capable of shooting 50 to 75 yards farther can be the difference between killing your target buck and helplessly watching as it walks out of sight on the last day of gun season. —J.G. and P.M.