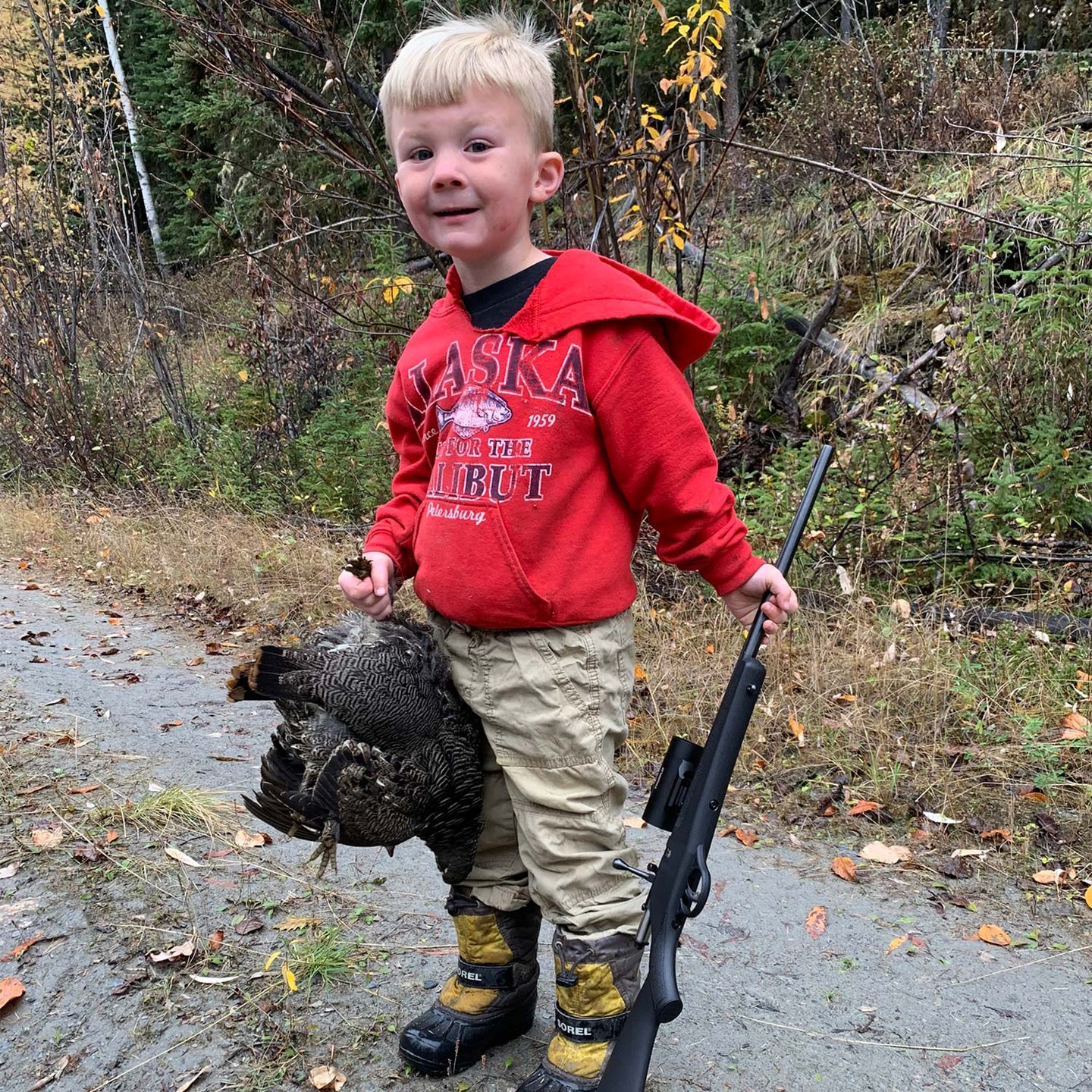 The author’s son with a spruce grouse. Tyler Freel
SHARE

At one point or another, every hunter or shooter who has kids ponders the question of how and when to begin teaching their children to shoot. Each person and situation is unique, so there’s no one right answer. If there is a universal truth, it’s this: If we want new shooters—especially kids—to stick with it and develop their skills, they need to see some success. And it needs to be fun. That’s why I used a red-dot scope to teach my son how to shoot his first rifle. Many traditionalists think learning to shoot iron sights is the best way to get started, but that’s not my preference.

Before you start teaching, the most important factor to consider for young shooters is recoil. For any new shooter, discomfort or pain (or the apprehension of either) will almost certainly deter them, or encourage flinching if it doesn’t. For a kid, recoil can easily create a negative memory that can take years to overcome. So you should pick out a gun that is easy on the shoulder.

Simplicity is another ally when teaching a kid to handle and shoot a rifle safely. There are plenty of options out there, from air guns to .22s, but single-shot rifles are always a smart choice. The action type itself is trivial, but a single-shot will give your new shooter plenty of practice at manipulating the action and safety practices, and you’ll both only need to worry about one live round at a time.

As with any discipline, there’s an “older way of thinking” that applies to teaching youngsters how to shoot. A traditionalist may think new shooters should always learn to use iron sights before progressing to optics. Learning to properly use iron sights promotes better positioning and other fundamental shooting skills, and is something every shooter should eventually learn. I don’t buy, however, that it’s always the best way to start. It’s not necessarily wrong, but a new shooter isn’t going to enjoy the immediate success he or she will with a red dot. And by success I mean hitting what they’re aiming at—consistently. Though to begin with, they may not be accurate. And that’s okay. Patience is key for both of you.

When I could no longer resist the urge to buy a .22 for my 3-year-old last fall, I was confronted with this very issue. One look at the iron sights on the little Savage Rascal, and I knew he would be frustrated despite his desire to shoot. With a youngster, you’re going to be dealing with someone who doesn’t understand sight picture, alignment, or head position. You can bet all three of those are going to add up to wobbly at best. They just want to hit what they’re shooting. So I asked myself: What sight will work, and be accurate, regardless of sloppy alignment with unlimited eye relief?

Iron sights were out of the question, and magnified scopes can be just as frustrating with limited eye relief. They are also not very forgiving for a shooter who struggles with alignment. The answer was clear, so I bought the biggest, cheapest, gaudiest red-dot scope I could find.

I hoped my little shooter would be able to hit what he was aiming at regardless of proper mechanics, as long as that dot was on target when he squeezed the trigger. That was the goal. I wasn’t sure how well it would work, but he took to it right away. With a solid rest and some help holding steady, he was able to aim and hit soda cans and even a couple of spruce grouse during hunting season. He’s four now and can hit a spinner target eight out of 10 times at 20 yards from a bench rest, and is learning to load and unload the rifle properly. The Rascal may look odd with a red-dot, but it’s the perfect setup.

Every new shooter will be different, and the process you use to teach and mentor them is your own. But I’m absolutely convinced that a red-dot sight is a better option for helping young shooters experience success quickly and remain interested. Learning to shoot iron sights is a valuable skill, but if you stick to a belief that this must be learned first, your shooter will be missing out on years of punching holes in pop cans, and hunting effectively.