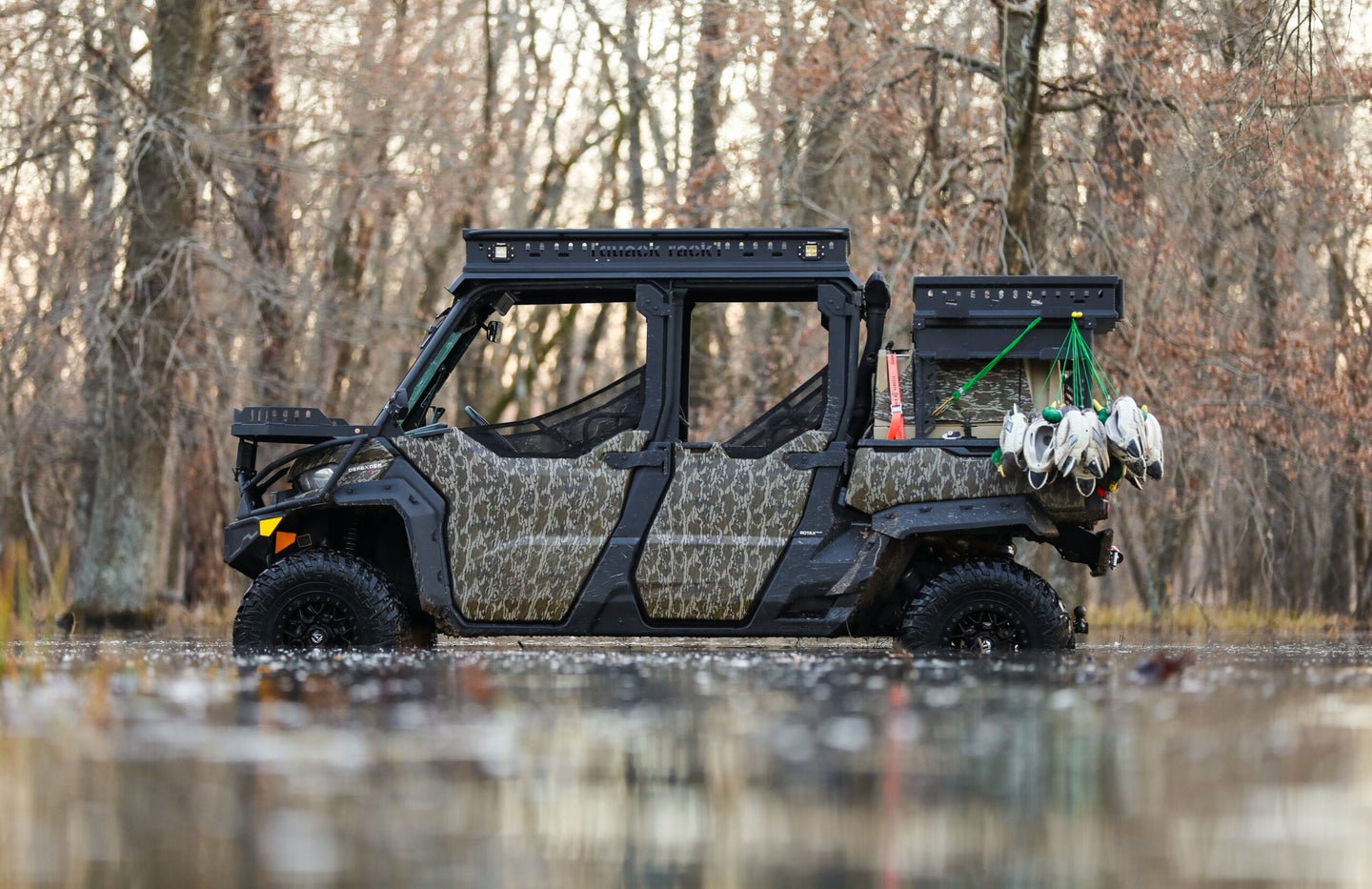 Duck hunters are notoriously hard on gear. They also can’t stand it when their gear breaks down. The machines that get us to the blind—trucks, boats, and side-by-sides, in particular—take an ass beating every fall. Whether you are a dry or flooded field hunter, you need a UTV that will rip down a mud-sucked levee, pull a trailer full of decoys into a cut cornfield, or haul four 300-pound hunting buddies through the gumbo in a flooded Arkansas rice field.

If you really abuse machines, there are only a few models of 4x4s that you can count on. For weekend hunters, it’s not as critical to buy a workhorse side-by-side, but for those who hunt 30 days a season or more, you need a beast of a machine. Most duck hunters are loyal to Polaris Rangers. They are fine UTVs, but I’ve driven a few Can-Am’s and talked to some folks that really know 4x4s, and most say the Defender is every bit the machine as the Ranger, though that is something you can determine for yourself.

Can-Am gave GUNNER founder Addison Edmonds the opportunity to outfit a Defender for exactly the way he hunts (mostly in the southern Mississippi flyway, and a few Central flyway states). There was also an Upland machine build. That Defender will be raffled this pheasant season with the proceeds benefitting the South Dakota Habitat Fund.

“They gave me the keys to it and told me to drive it like I stole it,” Edmonds said. “I knew I was going to have to give it back at some point. I wasn’t keeping it, so that’s exactly what I did. It did not fail on any of the hunts we took it on, and I feel like I put it in some pretty tough spots and was as hard as I could be on it.”

Edmonds took the Defender on the road during the 2020-21 duck season, which happened to be his dog Gunner’s (who his kennel company is named after) last season. The old retriever passed away of cancer, but not before Edmonds got to spend one last fall hunting alongside him.

“They took a disc out of his neck and told me he would ever be able to run or hunt again,” Edmonds said. “But we did some intense physical therapy…and so every hunt we got to go on was a bonus that I didn’t think we were going to be able to get. But he went downhill fast after that. I was happy to get to spend the time with him that I did, because like I said, it wasn’t supposed to happen.”

Here is a look at the stock options and aftermarket upgrades Edmonds made to the Defender before that final year with Gunner. The machine was built with several add-ons supplied by Quack Rack, S3 Powersports, EFX Tires, Fuel Offroad, Stingray Industries, Mossy Oak, and Lifetime Decoys. It will be raffled off June 27, at the Ducks Unlimited Expo at Texas Motor Speedway.

A Look Under the Hood

Can-Am’s are well known for their power and speed. The Defender MAX X MR has an 82-horsepower 976cc liquid-cooled engine with intelligent throttle control (so you don’t over rev the engine), and electronic fuel injection, which delivers gas to the engine more efficiently. You also get three drive options—2WD, 4WD TRAIL, and 4WD MUD—plus, the transmission functions on a lower gearing ratio with high airflow ventilation and strategically placed air intakes and exhaust.

Edmonds chose to add-on a snorkel kit, which Can-Am offers, so that the machine could run in flooded fields and timber. In the South, if you can’t get there by boat, you will most likely have to take a side-by-side to the blind. The water levels can be as high as the hood of your machine (higher if you hit a hole), and you need an exhaust and intake that won’t get flooded with water, so it’s a critical upgrade.

Other than power, the most critical stats of a SxS to a duck hunter are towing and payload capacity. We are always hauling hundreds if not thousands of pounds of gear into the field. Goose hunters in particular need a machine that can tow heavy loads. Dry field goose hunts require huge decoy spreads and that adds up to a lot of weight. Spring goose hunters have to rely on UTVs almost exclusively, because it’s impossible to get a truck into a muddy field that time of year without getting it stuck.

The Defender has a towing capacity of 2,500 pounds, which Edmonds said he regularly broke while hauling decoys around fields in Kansas and Oklahoma. It also has a payload rating of 1,630 pounds, so unless all your hunters are NFL offensive lineman (the Defender is a six-seater), you should be fine. The bed can hold another 250 pounds. Edmonds added an intermediate GUNNER kennel back there, which will be included when the Defender is raffled off in Texas.

You Gotta Jack It Up

The Defender comes standard with 15 inches of ground clearance, but duck hunters love lift kits, and so Edmonds gave the machine an extra two inches with a Forward-High Clearance A-Arm Kit from S3. S3 also installed HD springs, which give the Defender more stability, especially since it’s lifted so high off the ground.

Aftermarket tires are almost a requirement for side-by-sides. Most stock wheels are meant for running on pavement, dirt, or grass. But duck hunters are constantly driving through sloppy conditions, and a standard tire will often not give you the needed performance. This rig was equipped with a set of Fuel UTV Tech Beadlock wheels and 15-inch EFX tires.

Edmonds gave the tires a passing grade, and said they did well in the mud, but they aren’t perfect for the places duck hunters must travel. They look more like an off-road truck tire—built for speed on loose dirt, not getting your UTV unstuck in the dark. Many waterfowlers have switched to tracks instead of tires because they are so much more reliable, though you can’t go very fast when they are on. A winch will also get you out of just about any mudhole no matter what kind of tires are on your side-by-side, which is why Edmonds had one put on the back and front of the Defender.

Quack Rack has taken over the UTV/ATV storage market (they actually make boat and truck racks as well). Edmonds selected the Elite Rear, Roof, and Front racks for the Can-Am. The racks allow hunters to carry dozens more decoys and all kinds of gear into the field than if they just had a standard bed. For example, the rear rack holds up to 15-dozen decoys (you can hang many of the decoys from carabiners on the racks). They are a nice feature for field hunters as well, because in some cases—depending on how you are hunting—you don’t have to haul the trailer into the field because there is enough storage space on the Quack Racks.

Most duck hunters are just as infatuated with lights as they are jacking up their truck, and Stingray Industries has cashed in on that, because they know what duck hunters are looking for in lights. This Defender is bright enough to light up a football field. Edmonds strategically placed red Oval Rock Lights, a 20-inch light bar, and SRI Scene Pods on the UTV. When the lights are on and he is setting decoys in the dark, it might as well be daylight—it’s that bright.

“There are lights all over this thing,” Edmonds said. “There’s no reason for you not to be able to see something because there’s going to be a light shining on you. There’s not a duck hunter I know that doesn’t want another light on his ATV or goose trailer.”

Mossy Oak dipped parts of the Defender in its iconic Bottomland pattern. You will probably notice the doors are camouflaged. Most duck hunters don’t have a need for doors on their side-by-sides, and just about all of us take those safety nets down immediately. But Edmonds said he enjoyed having them because they kept mud and other gunk out of the vehicle. He also hunts with his young children and felt much safer with the addition of the doors.

Edmonds opted for Can-Am’s fender flares, which catch mud and keep it off your decoys, so you don’t have to wash every single one of them off once you get to the hunting location. He also went with a three-position flip glass windshield that can be set to fully closed, quarter-open, and fully open. This is a nice feature to have, because in the early season or summer, when you’re working on the farm or your lease, it’s hot so you can have the windshield open. But when it’s 2 degrees outside, you will be happy to flip it down and keep the cold off your face.

Last but not least, Edmonds added a windshield wiper washer kit. A lot of times when he follows someone else to the duck hole, mud kicks up so badly on his windshield he will have to reach out and wipe it off, or just pray that he is staying on the levee. A few swipes from the wiper and that problem is cleared.

“It was a cool opportunity to get to build a side-by-side the way I wanted it,” Edmonds said. “Will it be hard to let it go? Yes and no. I knew I wasn’t going to be able to keep it. But also there’s some nostalgia there. The kennel that’s in there now is the kennel I used the last time I took Gunner hunting. So, I am probably going to take that out and keep it and put a different kennel in there. And I am also thinking about putting some kind of plaque on the Can-Am, or something to commemorate that last season with Gunner.”