Texas Deer Hunter Gets Tossed by a 300-Pound Wild Boar, Shoots It from 5 Feet Away

The hunter could smell and hear the pig coming, but he didn’t see it until he was lying face-up on the ground 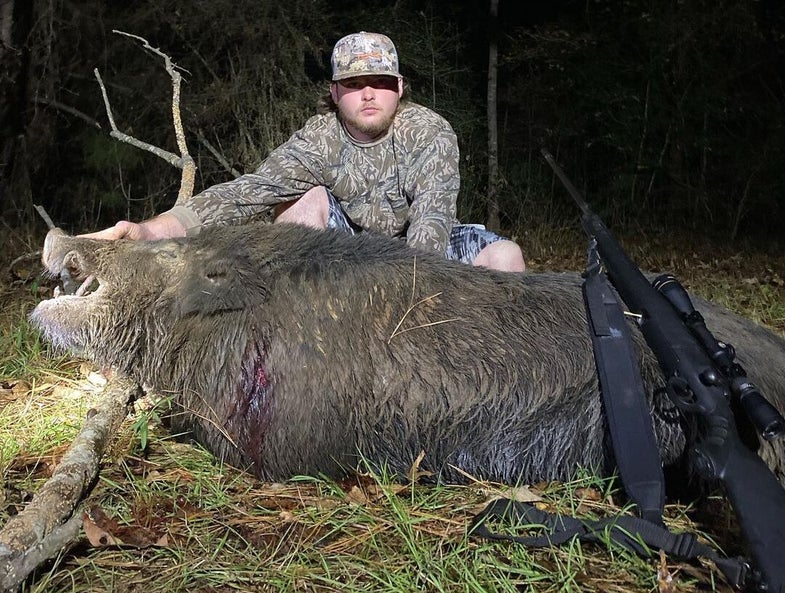 “I came around the corner and shined the light, and all the corn was gone. I could smell a hog, but I couldn’t hear him. Nothing.”

Then the nearby pine thicket erupted, says Brenden Bennett, “and it was unlike anything I’ve ever heard before.” The next thing he knew, Bennett was lying face-up on his back.

A half hour before, Bennett had just finished an evening sit at one of the deer blinds on his family’s property near Palestine, Texas. The 22-year-old was by himself, and he decided to check on one of the trail cameras he had set up near a feeder. He knew from recent photographs that there was a big, lone boar frequenting the area, and days before, he saw that one of the legs on the barrel feeder was broken. The most recent photo showed a big pile of corn—maybe 20 pounds worth—spilled on the ground.

Bennett says he’s hunted over the feeder for years, and that it’s one of his favorite bowhunting spots. It’s situated on one end of a small pine thicket, he explains, “and it’s so thick and dense you can’t even shine a light through it. But it’s perfect for sneaking up on stuff because you walk around that thicket, and as soon as you get to the end of it, it’s a 35-yard shot to the feeder.”

By the time he got there on the evening of Nov. 21, darkness had fallen. So Bennett parked the four-wheeler a few hundred yards away and took the footpath that winds around the far side of the pine thicket. His only light besides his cell phone was a Surefire work light, and he had that gripped tightly against the stock of his Savage Axis .30-06. With both hands on the rifle, he kept the barrel and the flashlight pointed at the ground, always wary of the snakes that thrive in this part of East Texas. It was still plenty warm out, and he was wearing shorts and a long-sleeve camouflage shirt.

As he approaching the feeder with the flashlight, the first thing he noticed was that the huge pile of corn was gone. But, he swears, he could smell the hog. And then all hell broke loose.

“It wasn’t a normal pig grunt,” Bennett says. And when he swung the barrel around to see where the sound was coming from, the hog was already on him. Backpedaling, he felt the snout come up under his kneecap, and then the boar raised its head up, tossing Bennett in the air.

“I landed about five feet back and he was still coming at me,” Bennett explains. But the pig hesitated for half a second and Bennet, lying flat on his back, swung the rifle and took aim.

“I clicked the safety off and somehow still managed to hold the light against the rifle. The gun wasn’t shouldered, but I pointed it over my feet at him and pulled the trigger,” Bennett says. “He squealed and did a donut, and then ran 20 yards and died.”

Read Next: A Surfer in Hawaii Was Attacked by…a Wild Pig?

At this point, Bennett tried to stand but his knee buckled. To his surprise, he wasn’t cut, but he was shaken up and worried that the knee might be injured. (Aside from a big bruise, it wasn’t.) He stayed seated by the feeder for the next 15 minutes or so, scanning with his rifle all the while. Then he called his dad, who could tell right away by the sound of his son’s voice that he needed help.

After loading the pig up in the bed of their Mule—which Bennett says took all the effort that he and his dad could muster—they headed home to weigh the big pig. The only thing they had was an old cotton scale that went up to 260 pounds, and it bottomed out instantly. “I can’t tell you how much it weighed,” he says, but guesses that the hog was somewhere upwards of 300 pounds.

Bennett was also initially surprised to see that there was no exit wound even though he shot the boar at such a close range with a 180-grain Hornady ELD-X bullet. The entry wound was on the front shoulder, but when he skinned the hog, Bennet saw that the bullet never passed through. He says the pig’s shield—a subcutaneous layer of tissue that covers the boar’s shoulder—was about two inches thick, and the bullet had fragmented into 20 or more pieces.

The boar had one four-inch tusk (measured from the gumline), along with one broken, rounded-off tusk that was about half as long. The animal also had scars, puncture wounds, and torn up ears.

“It was just a really big, really old hog,” Bennett says. “And I must have been 10 feet from him when I walked by. But he didn’t make a sound, and I never knew he was there.”