The 6 Biggest Myths About Hunting, Killing, and Eating Big Boars 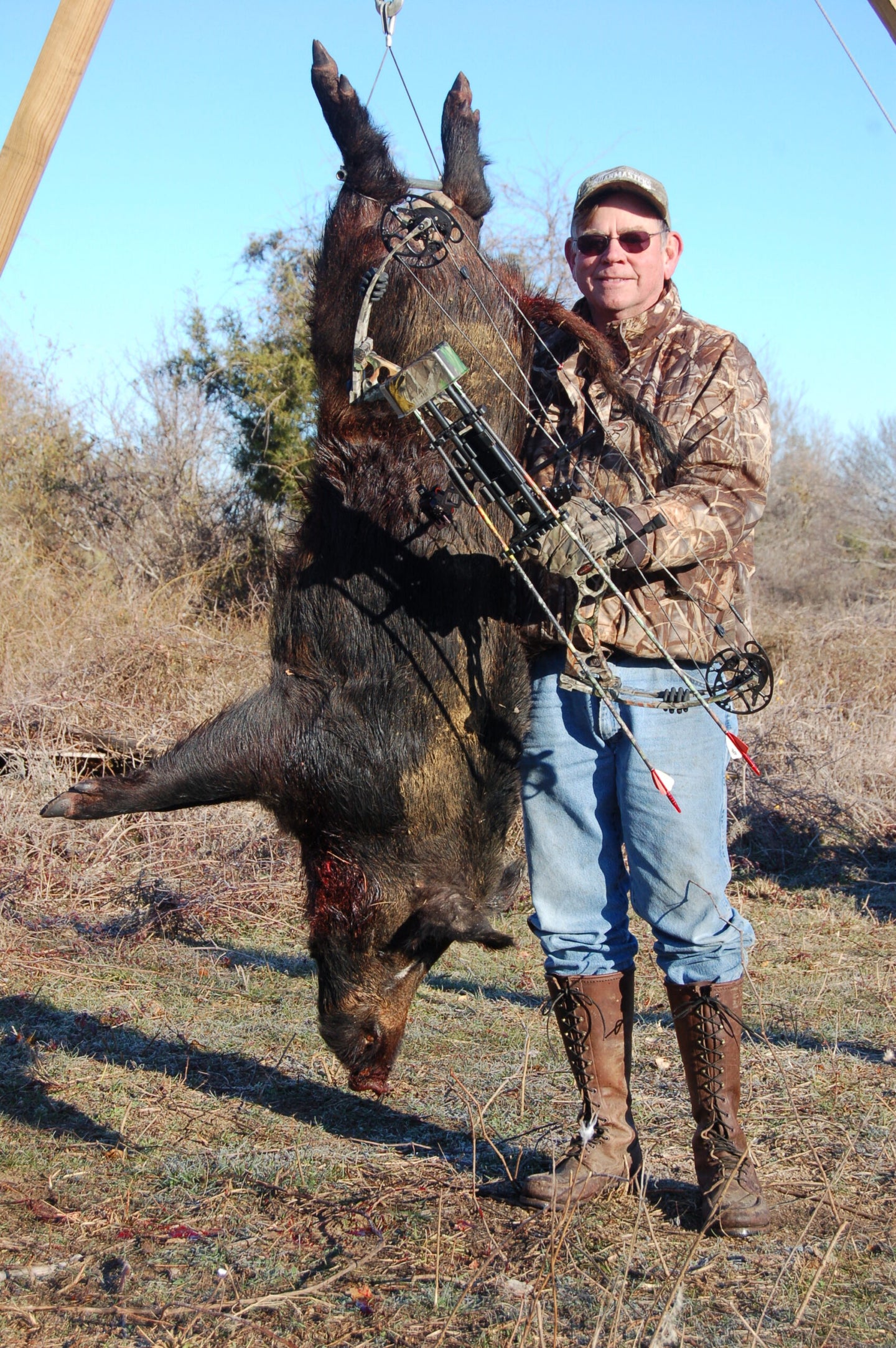 Veteran tusker-tracker and outdoor writer Luke Clayton has been hunting Texas hogs for more than 40 years. He’s tracked and put down porkers with everything from knives to flintlock rifles to longbows.

While hog-hunting has gained in popularity in the four-plus decades he’s been afield, Clayton reports there’s been no change in the fundamental basics of tracking and putting down porkers. But many newcomers, and even some longtime aficionados, have misconceptions about how to hunt them and prepare them as tablefare.

Here are Clayton’s six most commonly-cited fallacies about hog hunting.

The U.S. Department of Agriculture estimates there are between 5-6 million feral pigs ferreting through forests and fields in 40 states and four Canadian provinces. These invasive porkers are the gone-wild descendants of domesticated pigs imported from Europe—peccaries, such as javelina, are the only native American swine—beginning in the late 1500s through the 1800s.

According to annual surveys by Texas A&M University, roughly half those hogs, anywhere from 2.6 million to 3.4 million, are in Texas, where they cause about $400 million in property damage a year and degrade habitat for native species. Although hunters harvest about 750,000 a year in 240 of the state’s 254 counties by gun, bow, and traps, there’s no sign of a wild swine decline in the Lone Star State.

And that’s a good thing, according to Clayton, because feral pigs are very tasty, provide year-round opportunity, and generate revenue for ranchers and other property owners who lease land for hunting. In fact, Clayton said fears of a coming “aporkalypse” in Texas are exaggerated and most landowners actually manage wild porkers as “a cash crop.”

“The state isn’t overrun with them and landowners aren’t seeking volunteers to come down and help them get rid of hogs,” Clayton said. A traveling sportsman is better off contacting landowners who offer relatively inexpensive hog hunts on their properties year-round instead of taking a “hit-or-miss” chance on bagging a feral pig on Texas’ limited public lands.

“One of the biggest fallacies is hogs are blind, that they can’t see very well,” Clayton said. “Well, what they see is movement.”

Because their heads are low to the ground, a pig’s view of the world is often limited. “A big hog’s eyes are going to be no more than 30 inches above the ground,” he said. “There is brush and bramble blocking their view, so they’re peripheral vision is not very good.”

During a recent hunt, Clayton and a fellow hunter watched in the open as hogs edged into a field around a pond to eat from a feeder about 200 yards away. The pigs never reacted until his partner took off his hat and waved it above his head.

“They took off back into the bush,” Clayton said. “So, they can’t see as well as humans, but they can spot movement from 200 yards.”

3. You Need a Heavy Caliber

Clayton said this is a persistent fallacy and often results in destroying more meat than is necessary. Their sheer size and muscle — a mature tusker can reach a shoulder height of 36 inches and weigh more than 400 pounds — contributes to this misconception, he said.

But another reason why so many hunters think they need to go with heavy calibers is because, as boars age and grow beyond about 125 pounds, they develop a hard, armor-like shoulder plating, Clayton said.

“You do not have to have a Magnum caliber,” he said. “Any serviceable deer rifle will work for this. A .30-30 will penetrate” a big boar’s shoulder armor.

On the other hand, Clayton said, a one-shot takedown through a big boar’s tough shoulder armor an iffy proposition. Porker physiology makes other areas more vulnerable, he said.

“A hog’s vitals are low to the ground. He is compact, not long like a deer,” Clayton said. “The fallacy is to shoot one broadside over his shoulder.”

The best shot “is a quartering shot,” he said, “from its hoofs to a straight line up vertically to the base of the ear. Don’t aim behind the shoulder.”

A head shot at base of ear is a lethal shot that will drop a hog immediately, he said, “if you are not interested in mounting it.”

There are two reasons for this, he said. First, it takes a bit of pumping for blood to seep through a pig’s thick layer of fat and, second, their “hair soaks up that blood. It’s like a sponge.”

If you know you nailed a tusker but it has scampered off into the brush without leaving a blood trail in its immediate wake, canvass the area in semi-circles, Clayton said, noting you often won’t see blood until you get 30 to 50 yards from where it was shot.

“Look for blood on brush, not on the ground. Keep a good eye on the direction he ran off to,” he said.

6. Meat From Big Boars is Inedible

“I hear many people say this and it is untrue,” Clayton said. “Older boars above 150 pounds or so make great pork chops. The rest is sausage. They don’t make good ham or ham steaks.”

Here’s why people get that impression: “Most of that testosterone in an older boar is carried in its sexual organs. That is where the smell comes from,” he said. “Cut around the sexual organs and extract them all in one piece.”

In other words, meat quality in a big porker is all about how you butcher the boar.

One of the reasons why younger boars are often better than sows is they are not suckling piglets. Sows often have litters up to twice a year. They won’t be in as good shape as boars,” he said. ––John Haughey

For an elk hunter who hikes all week for one shot, an AR-style rifle typically isn’t an ideal setup. But when it comes to pig hunting, it’s hard to imagine anything better. High-capacity semi-auto rifles chambered in game-stopping calibers are currently being manufactured at roughly the same speed that feral hogs reproduce.

Bushmaster makes the original bacon-busting AR. A 450 Bushmaster upper can be mated to standard AR-15 (5.56 NATO) receivers, though it is offered as a complete rifle as well. The gun sends a .45-caliber, 260-grain slug at 2,180 fps from a 20-inch barrel for 2,743 ft.-lb. of energy. It comes with a five-round magazine, though factory nine-rounders are available. That’s a lot of lead going to a good cause. $1,500

Rock River is a mom-and-pop AR shop that builds them as well as anyone–­especially for the price. Its triggers are heavenly, and now it offers an AR-10 platform called the LAR-8 X-1. It’s got an 18-inch barrel, a full-length rail for mounting optics, and 30-round mags. I shot sub-MOA groups with it, and I killed two axis deer, a hog, and a toothy alligator with one shot each. $1,800

The Model 7 Hunter in 6.8 Special Purpose Cartridge (SPC) gives a 300- to 400-ft.-lb. energy advantage over the 5.56/.223 Rem., though they share the same action length. With premium bullets like the 85-grain Barnes TSX, there’s no boar surly enough to survive it. The matte-finished rifle features a Hogue rubberized and free-floated forend, a full-length rifleman’s buttstock, and a five-round mag. $1,055

Although it’s tempting to take the lead pig in a pack because it’s the closest, a fast-firing AR grants the opportunity to shoot several at a time. Pigs that watch a companion fall in front of them often change direction rather than continuing the beeline. So choose a low-magnification optic like an Aimpoint or 1X-6X scope, then pick the rear pig, fire, and swing forward to the next in line. ––Jeff Johnston