State officials speculate the eagle picked up a road-killed deer 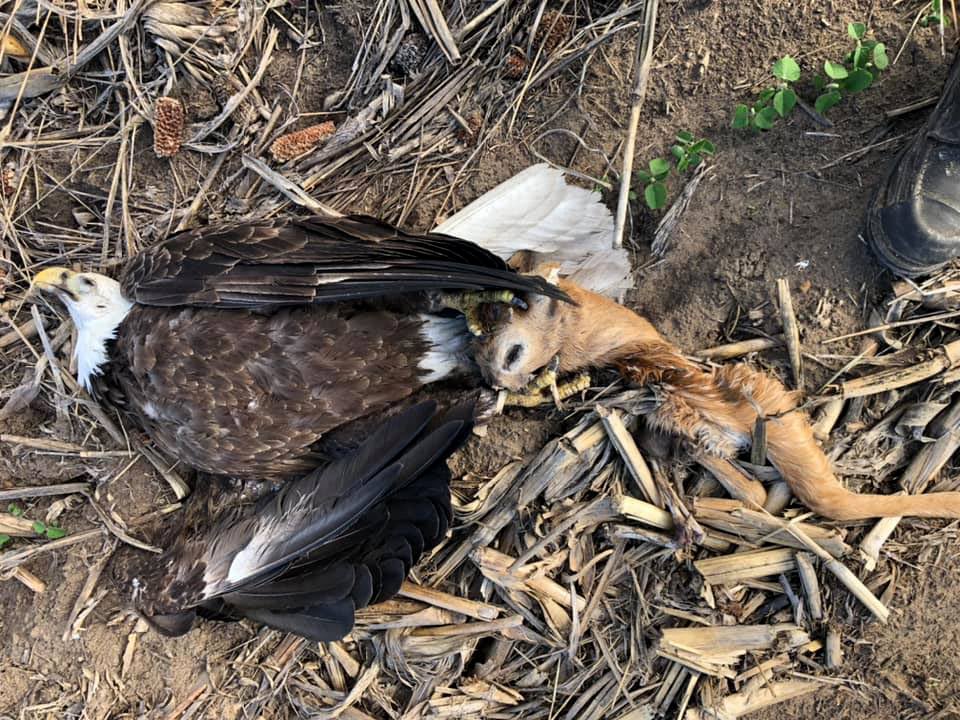 This dead bald eagle is an unusual sight for any hunter to find. Neal Herrman
SHARE

This morning started out as a promising day for turkey hunter Neal Herrman of Barron, Wisconsin. He shot a 2-year old gobbler shortly after daybreak, and by 9 a.m. had traveled to nearby Dunn County to scout for more turkeys.

“I was easing along, looking for turkeys, and happened to glance out into a cut cornfield and spotted something white,” says Herrman. “I couldn’t figure what it was, so put my binoculars on it, and it looked like a bird of some type. So I walked over to take a better look.”

What Herrman found was something most outdoorsmen and women could never imagine.

“When I got close I saw it was a mature, dead bald eagle,” says Herrman. “And its talons—both feet—were locked solidly into the skull of a mostly decomposed fawn-size deer.”

Herrman, 45, couldn’t figure what killed the eagle. He speculates that perhaps the talons got buried so deeply into the deer’s skull that it couldn’t pry them loose, and died as a result.

Herrman, who makes wood strikers for Hooks Custom Calls, knew it was important to contact state authorities, so he called his brother-in-law Greg Moen, who works in law enforcement for Dunn County. Herrman snapped photos of the bird and deer. When Moen arrived on the scene, the two men carefully collected the dead bald eagle and deer from the field (with the green-light from the Wisconsin Department of Natural Resources personnel) and took it to a local DNR office for further inspection.

“A DNR officer thought that because the deer was so deteriorated it was likely a 2- or 3-day old road kill, and the eagle had picked it up at a nearby well-traveled road,” says Herrman. “A vehicle strike may have injured the eagle as it flew off with the decomposed small deer, but I didn’t see any damage to its wings, legs or anywhere else. And I don’t think it was dead for more than a day.”

Herrman says the eagle was fully mature, with at least a 6-foot wingspan. Eagles are not uncommon in the area due to the close proximity of the Mississippi River, along which eagles migrate seasonally.

But what killed the eagle remains a mystery. Herrman is hoping DNR biologists will figure it out.