To find trophy whitetail, elk, and mule deer antlers, start with optics and then employ a ground strategy 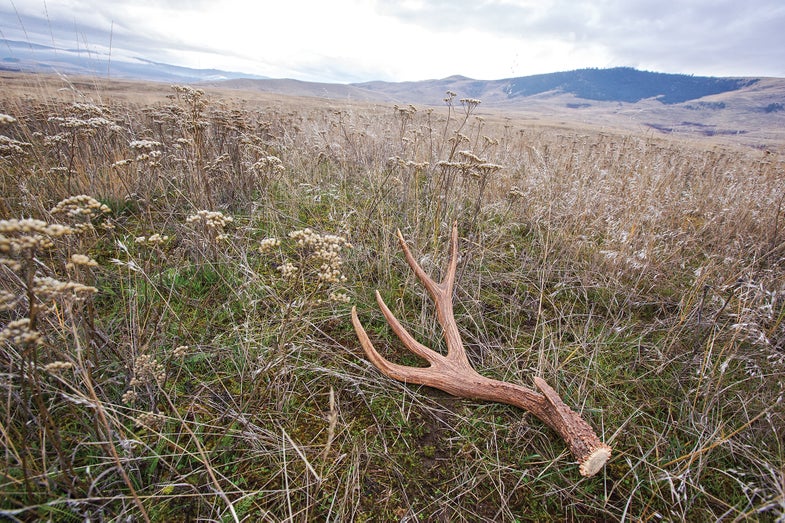 It was a few weeks before spring turkey season, and my son and I were scouting a known roost area. Eyes glued to the ground for feathers and droppings, I was pleased to spy a perfect 5-point whitetail antler in the rotting snow. No sooner had I suggested Noah keep an eye out for the companion antler than the boy bent over and triumphantly picked up what was obviously a match—with a bonus point. An 11-point!

There’s nothing wrong with a little luck. But when you’re out chasing sheds on purpose, it pays to rely on more than just good fortune. Tom Miller, Don Schaufler, and Scott Wait have been hunting sheds for a combined 75 years. Their insights will help you collect more whitetail, elk, and mule deer sheds—and maybe some true trophies.

Tom Miller is vice president of the North American Shed Hunters Club (shedantlers.org). He lives and does much of his shed hunting in whitetail-rich Wisconsin, but he travels all over after antlers.

Miller uses optics to scout winter whitetails from a distance, but he only goes in for sheds when winter is over and the bucks have dispersed.

“Find where the deer are feeding,” he advises. “Then, when you’re actually hunting antlers, head back in along trails to bedding areas.” Look for sheds all the way from the food to known bedding areas. “I find 70 percent of my whitetail sheds on southern exposures where bedded winter deer can soak up some sun,” says Miller. “Ridgetop pine thickets and brushy lowlands that are sheltered from winter winds are great.”

“It’s simple but true: You have to really work to keep looking at the ground,” says Miller. “It’s so different than hunting the actual animal, where you should be looking up.

“In an area where you think there should be sheds, hike the same ground multiple times from different directions,” he adds. Sometimes a new perspective will reveal jutting tines or the sweep of a main beam that you didn’t or couldn’t see from another angle.

“Big bull elk winter in bachelor groups,” says Schaufler. “A shed hunt starts with glassing those small herds over time. Work from a distance, and get to know where they are hanging out. As the snow line recedes up the mountain, they’ll go with it.” If a bull group you’ve been watching dwindles in size, that’s a good thing: You now know where the antlers are. “As bulls drop their antlers, they leave the gang. Bulls compete for pecking order all year long, and an antlerless bull knows he’s vulnerable.”

Many areas restrict access until elk are off their winter range. Once you’re allowed onto the land, get to where you watched a bull group shrink, and start looking.

“Elk shed hunting itself starts with glass, too,” says Schaufler. “Good elk antlers are big, and you can spot them from a distance. Save yourself steps.”

Go for a matched set. “If you find one antler, especially a big one, there should be another nearby,” explains Schaufler. “Bulls just hate the imbalance when one antler is off. They’ll shake their head to get rid of the other, for relief. I once found a perfect matched set lying in the shape of a cross.”

“Most years, big mule deer are going to drop their antlers during the last couple weeks of January. Smaller bucks may hold theirs longer, into March,” he adds. “But you should wait to go shed hunting. Winter gives mule deer enough stress the way it is.”

Like Schaufler, Wait endorses a glass-first approach. “Why put on the miles?” he says. “Wait until winter is over, then get to sunny exposures in shrub habitat and glass from high spots. Look for tines sticking up, the glint of sunlight off an antler, a V fork, or the graceful curve of a main beam, all of which are out of place in the landscape” dominated by spiny and angular vegetation.

Mule deer country is big. To avoid re-walking an area, do a walk-stop-and-circle search instead: Stop every 50 yards or so and do a 360-degree look around, to take advantage of new viewpoints. When you find an antler, imagine four quadrants around it, and search each area for a companion antler, which will often be within 50 to 75 yards.