Jason Kline spent years chasing a giant non-typical buck he had named Herman. This winter, he found the buck’s rack 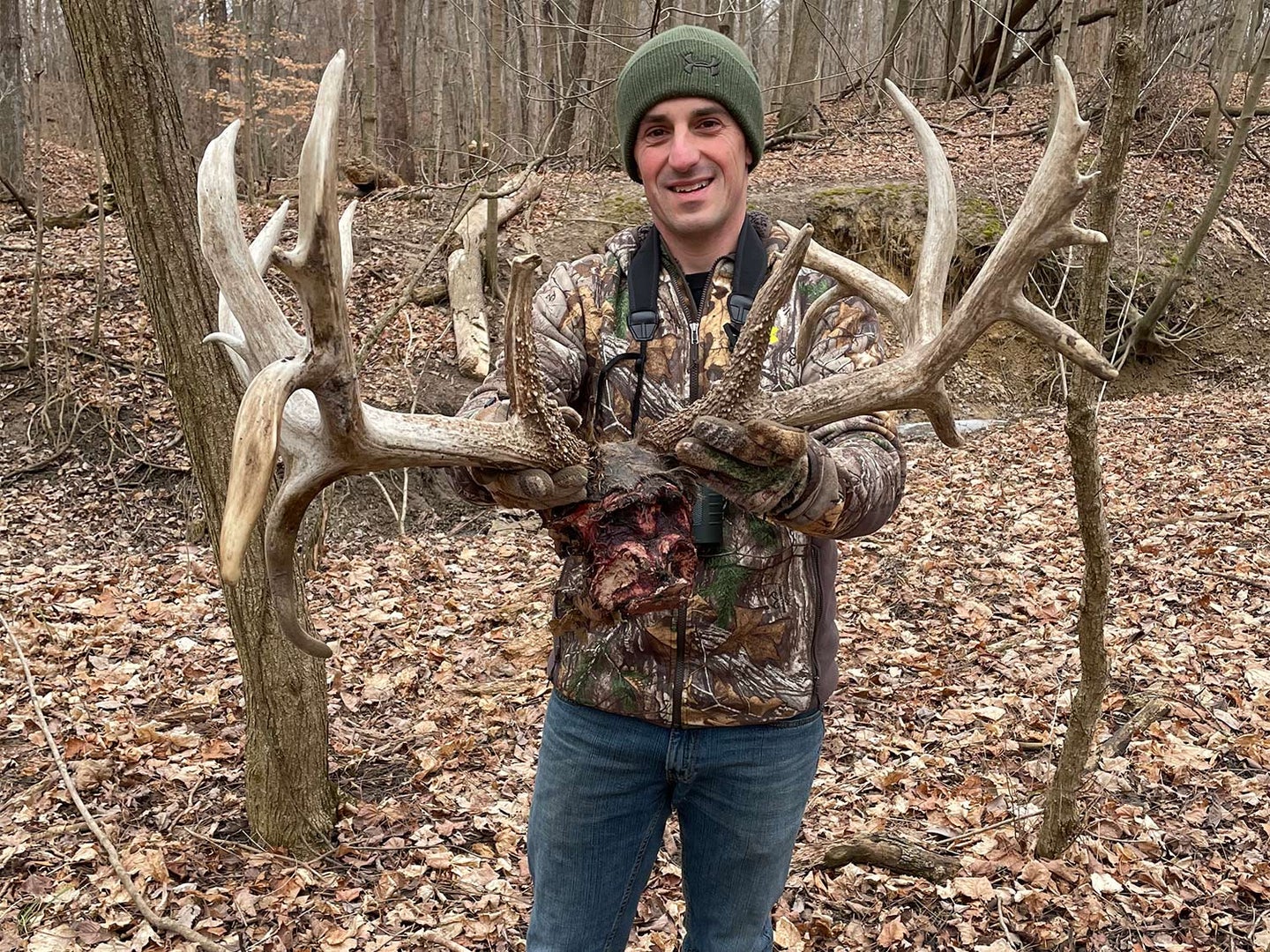 Jason Kline shows off the beast that he hunted for nearly a decade. Jason Kline
SHARE

Jason Kline has spent much of his life chasing whitetail deer. He’s killed his fair share of good ones, but there’s only ever been one “Herman,” which is the monster buck he focused on for the past five seasons. Kline hunts Sandusky County, Ohio, which is located in the northwestern region of the state. That isn’t the area of Ohio that’s best known for big deer—the southern third of the state is more often recognized as monster buck country—but don’t tell that to Kline who recently picked up “Herman’s” 233 7/8-inch rack.

Figuring the deer was around 8 years old in the fall of 2020, Kline had been hunting Herman since he was 4 or 5. The deer started out as a main-frame 8-pointer, but sported a shiny sticker, too. In the beginning, the deer was mostly typical, but that changed with time. As Herman got older, he turned into a bona fide giant.

Enter the 2019 season. Kline had years of trail camera photos, and a decent idea of how to kill the buck. The problem? Access.

The bulk of Herman’s core area was located on a large tract of land owned by a farmer who doesn’t allow hunting. Fortunately, Kline has permission to hunt a 7-acre parcel that borders the sanctuary. Occasionally, the buck traveled through the 7-acre property. In December of 2019, it happened while Kline was there.

“I hunt a little patch amid the several hundred acres,” Herman says. “Last year, during gun season, I had him in gun range at about 80 yards. I just couldn’t get a good shot at him, and to be perfectly honest, he was standing right on the property line. I couldn’t tell if he was on my side of the property line or the neighbor’s. The fence is broken down right there, and I couldn’t see it from where I was.”

Making the legal and ethical choice, he let the buck walk out of sight. That would be the only time Kline ever spotted the buck from the stand. Still, he and others regularly glassed the giant out in the open on the big farm that wouldn’t allow hunting .

“Northwestern Ohio has blocks of fields and woods,” Kline says. “He was very visible. It was kind of dumb for a deer this big, but people would see him every day, either morning or evening.”

Of course, since the deer was so visible, everyone in the area knew of him and wanted a crack at the giant.

“We would share trail camera pictures with each other and talk about the deer,” Kline says. “Few people could really hunt him — because of where he was — unless he traveled around or went across the road, which he did.”

By last summer the giant buck had grown an even more impressive rack. Kline and other hunters hoped that the 2020 season would be the year.

“I wasn’t really getting many pictures of him, though, and my only good chance to kill this deer was during the rut,” Kline says. “That’s the time I’d [historically] get the most pictures of him.”

But he never got the chance. In October, the stud disappeared. “I got a little concerned,” Kline says.

Read Next: Shed Hunting: Secrets of the Shed Masters

All the while, a 162-inch deer showed up on a different farm. It was showing up regularly and seemed very huntable. Kline had never killed a deer that big. So, with Herman missing in action for numerous days, Kline transitioned his attention the other buck.

“I was thinking, Do I keep hunting this giant?” Kline says. “Or, do I go hunt a deer that’d be the biggest deer I’ve ever killed?”

“I ended up shooting the 162-inch deer,” Kline says. “I debated. It was hard. It worked out, though. I think Herman was already dead by the time I killed mine.”

Fast forward to January. Tag already filled; Kline couldn’t help but wonder what had happened to Herman. He hoped the buck might return in camera photos, but he knew in his gut that wasn’t likely to happen. He hadn’t heard of any other hunters tagging him, and news of such a giant buck would certainly spread quickly. He suspected the deer was dead somewhere on the sanctuary property.

“The farmer/landowner doesn’t let anybody deer hunt, but he allows me to go shed hunt,” Kline says. “So, just from knowing the property, I thought that there would be one particular place where a big deer might go to die. It’s a thick, secluded creek bottom.”

On Sunday, January 24, he eased into the property. Kline hoped for the best, but expected the worst. But once in the area, he found the buck within minutes. The massive deer laid dead only 50 yards from the property line. The carcass was picked over by scavengers so there was no way to tell what had actually killed the buck. Having disappeared from cameras during the heart of hunting season, it’s possible that another hunter wounded Herman. But, it’s also possible that the old buck succumbed to the stresses of the rut, possibly getting wounded by another buck and going down to infection or coyotes or both.

“He was laying right where I thought he would be, which is kind of crazy,” Kline says. “When I found him, I didn’t know what to think. But now that I actually have him at home, it’s crazy. He’s so much bigger in person. I’m sad that he died and wasn’t killed by someone, but I am glad to have him.”

After finding the buck, a game warden arrived to check everything out. Knowing that Kline had actively hunted this deer for years, the landowner was nice enough to let him keep the rack.

Reflecting back on his many years of pursuing this deer has been bittersweet.

“I was so mad about last year,” Kline says. “To have a deer that big in gun range, and not be able to shoot? To be so close, and to not be able to pull the trigger, that was difficult to deal with.”

Although the story didn’t end the way Kline had hoped, at least he found closure, and the 233 7/8-inch rack to remember the buck and all the seasons spent chasing it.