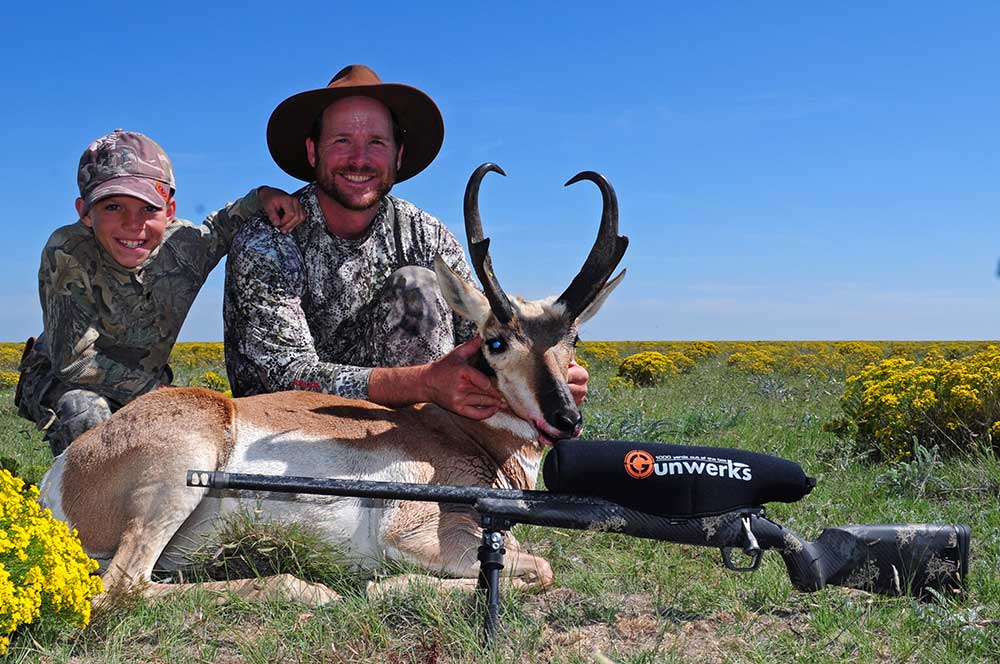 The day after finishing his Gunwerks shooting course, the author made a 486-yard shot on an antelope. Aram von Benedikt
SHARE

My brother and I blasted away at 16 one-liter pop bottles swinging from strings a few yards away, cheering each other on when one of us landed a lucky shot with a little single-shot .22. We were 8-years-old, and our shooting technique wasn’t very sophisticated. We missed a lot because of that. But those little shooting excursions started me on a lifelong path toward shooting perfection. I’m still a long distance from reaching that goal, but that’s an awesome thing—because it means I still get to study, practice, and strive to become a great shooter.

Last fall I had an opportunity to attend one of Gunwerks’ Long Range University shooting classes at the NRA Whittington Center outside Raton, New Mexico. Here are the most significant long-range shooting strategies and techniques I learned from some of the finest long-range shooters in the world.

Almost four decades have passed since I pulled my first trigger. I’ve shot $25 rifles and $70,000 rifles, and a few from betwixt those numbers as well. But I can honestly state that I was amazed at the solidity and accuracy of the Gunwerks rifles. This may sound like a shameless plug for Gunwerks, but it’s a fact: if you want to shoot long, use enough gun.

During the class, students were paired up to share a 6.5 Creedmoor Gunwerks rifle and a spotting scope, and I found myself teamed up with a delightful lady from Texas. I may have had a better understanding of the intricacies of firearms than she, but let me tell you, that gal could shoot. After watching her shoot four one-hole groups in a row at 100 yards, I knew that these rifles were unlike any I had previously experienced. (And no, I didn’t shoot as well as Robin did; my, ah, contact lenses were acting up.)

So what makes Gunwerks rifles so good? Design and quality. The carbon-fiber stocks are made in-house and specifically designed for stability, consistency, ergonomics, and spot-your-own-hits tracking. Rifles come standard issue with Proof Research barrels. The action and other metalwork is made in-house and held to the highest standards of tolerance and quality. A TriggerTech trigger quarterbacks the assembly. Add a premium optic and you have, as our veteran Marine Sniper instructor put it, a rifle that shoots with “surgical precision”.

Can other rifles perform at long-range? Of course. Other companies produce very fine rifles capable of long-distance shooting. Some companies make economy-grade rifles that shoot very well, and paired with suitable optics, can be used effectively to ring targets at eyebrow raising distances. Those rifles can be compared to a faithful Toyota sedan; they’ll get you there and bring you home. The Gunwerks rifles are comparable to a Lamborghini rolled up with a Dodge Cummins: they possess panache, fine workmanship, and super-power like accuracy.

The last two decades have seen significant changes in caliber design. Long, aerodynamic projectiles have superseded light, fast ones. Shooters and hunters alike demand higher levels of accuracy and deep downrange performance. Light recoil is given more importance than in yesteryear, because long-range shooters like to spot their own impacts so they can make rapid corrections and follow-up shots. Muzzle breaks and suppressors have become common sights on the range and even in the field.

Great long-range cartridges today include the wildly popular 6.5 Creedmoor, it’s new big brother the 6.5 PRC, and with a step up in authority as well as recoil, the .280 Ackley Improved, 7mm Rem Mag, and the hot-rod .28 Nosler.

Rather than the classic, body-offset prone position that I’d learned during my youth, the Gunwerks instructor taught me to lie directly in line with my rifle, butt pad snuggled firmly into my neck-collar bone juncture. Legs should be spread wide, feet almost flat on the ground, with toes dug in slightly to give stability. The bipod is loaded (meaning forward pressure is applied), the rifle forming a sort of bridge between shoulder and bipod legs. As the chest settles ground-ward the bipod becomes loaded even harder and the bridge becomes very stable. The cheek is snugged against the riflestock. The free hand (left for right-handed shooters) rests under the butt stock, supporting it atop a rear bag. The cheek should stay snugly against the comb through the shot, eyes fixed on the target while the shooter re-cycles the bolt for a follow-up round.

Once you’ve established the general position, you need to eliminate muscular tension. Relax every part of your body, settling into the ground and the rifle until you are comfortable. If the crosshairs aren’t on target don’t muscle the rifle into place—rather, adjust your body until the crosshairs stay steadily on target.

Once you’re settled into position, crosshairs steadily on the target, you have to send the shot perfectly. Regardless of how accurate or expensive your rifle is, how perfect your position, how great your ammunition; if you jerk the trigger it’s all for naught. Here’s how to do it right.

Press the trigger. Place the first pad of your finger on the trigger, and press it straight back toward the butt of the rifle. Your finger should form a 90-degree angle at the second knuckle. Press, but do not jerk.

Follow through. Don’t “flick the booger” with your trigger finger. Instead, keep your finger pressed on the trigger for one full second after the shot.

Spot your hit. Keep your eye on target through the shot and spot your impact so you can make windage and elevation corrections for your next shot. Tip: keep your scope turned down between nine- and 12-power—it’ll give you a wider field of view, enabling you to spot your hits.

A good practice drill is to get into a prone position and shoot a two-shot group on a 100-yard paper target. Stand up, move yourself and the rifle around, then repeat. This drill is to build consistency in form. Ultimately, you want all of your two-shot groups to impact in the same place. You’ll be surprised at how hard that is to accomplish.

Read Next: Training Drills to Become a Better Long-Range Shooter

Reading the wind is the one variable that is never completely within our control. That’s why most good long-range hunters won’t take a shot in heavy wind. It’s also why spotting your first impact (so you can make a correction) is so important.

Look at three zones when reading the wind:

Give more weight to your position, because it’s the only place you can take an actual reading. But don’t neglect the other two locations. If you can get a good idea of what the wind is doing at two of the three locations, enter the wind direction and speed into your ballistic app, calculate the yardage, implement the windage hold, and take the shot. Note: most long-range shooters prefer to use the stadia marks in their reticle to push right or left for windage holds, rather than dialing their windage turret. That’s because wind is usually variable, and they can make in-the-moment corrections without breaking their position to crank the windage turret.

The day after classes ended I finished a three-hour stalk lying prone 486 yards from a nice pronghorn buck. A six mph wind blew from nine o’clock. My position was solid, crosshairs steady as a rock over the quartering-to bucks vitals. There was no doubt in my mind as I held 1.5 minutes into the wind and pressed the trigger. Seconds later the buck lay among the prairie flowers waiting to be converted to meat, dead with one perfect shot from the 6.5 PRC Gunwerks rifle.