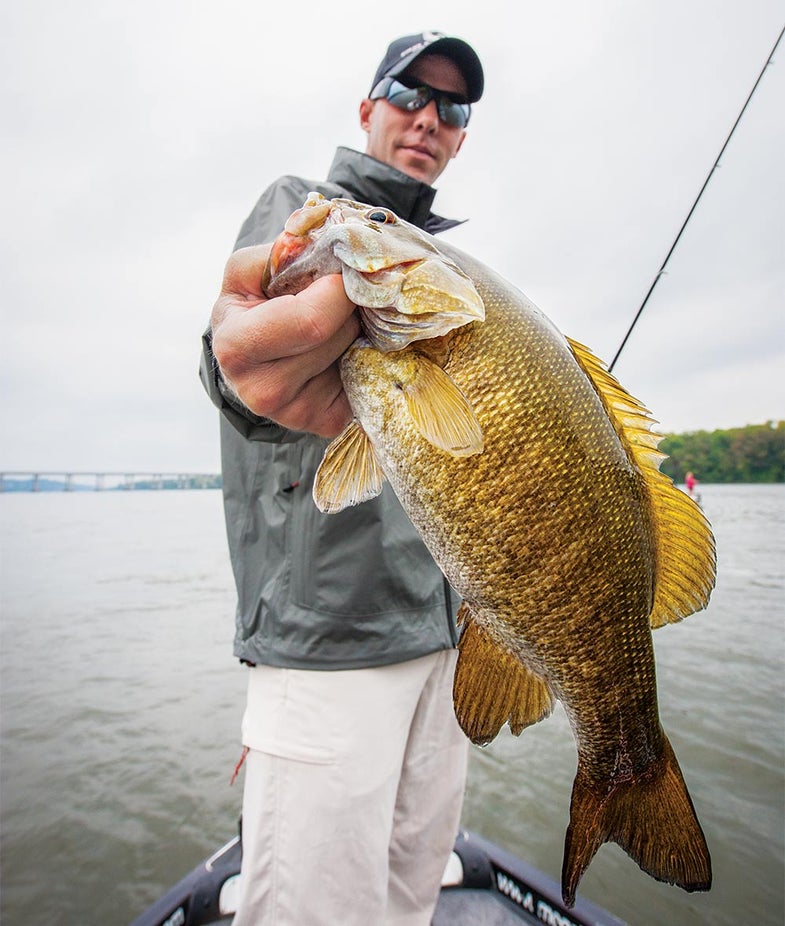 Smallmouth bass can be hard to find in fall, but when you do, you often find a lot. Brian Grossenbacher
SHARE

Paul Mueller may have caught the biggest five-bass limit in Bassmaster Classic history in 2014—more than 32 pounds of Alabama largemouths—but smallmouths are his obsession, and this Connecticut pro has chased brown bass throughout the country. Many anglers have a love-hate relationship with smallmouths, he says, because they roam relentlessly on many bodies of water, so if you locate the mother lode one day, they can be gone the next. This frustrating habit becomes even more exaggerated in fall, when dropping water temperatures keep forage like alewives, perch, and smelt on the move. Mueller says that no matter where you live, the commonality is that smallmouths are voracious at this time of year, and that where the bait goes, so go the bronzebacks. Finding them is tricky, but what he’s learned during years of fall fishing will help you cut down your search time.

On river-fed reservoirs, Mueller says, smallmouths “roam a lot more than they do on other water types, but they group up a lot more too. You have to treat the river channel within the reservoir like a highway and follow them to different stops. Think of offshore rock piles, secondary points, and current breaks like rest areas and gas stations.”

Just as we only pop into a rest area for a quick bite, so do bass, making good timing critical on these systems. Your window for success at a given stop may be short, and you can never expect the fish to be in the same place the next day.

On a large natural lake like Champlain, Mueller says, bait that’s been deep much of the summer will move ultra-shallow as turnover occurs before heading back out to the depths for winter. This makes areas like marinas and inside grass lines worth focusing on, but here too smallmouths will only hold for a short time. Conversely, if you fish free-flowing rivers like the Susquehanna, when the waters cool, baitfish move deep, seeking more stable temperatures. “You want to look in places that are out of the current but near it, like eddies and deeper holes,” Mueller says. “Concentrate on seams.”

According to Mueller, when you break down these key locations on each type of fishery, they all tend to have quick access to deep water and rocky structure in common. If you find one of these areas with a combination of rock and weed, it’s even more desirable to the forage smallmouths crave. Mueller says the best time to get after them regardless of water type is in the stable period following a cold front or two, when the changing weather has pushed the fish and their prey into new areas, but when they’re also ready to feed again.

Mueller uses his electronics religiously to find fall smallies, and in particular relies upon his Garmin Panoptix, which he sets to search at a range of 80 to 100 feet around his boat, providing him real-time data and incredible resolution; he can see not just the traditional arches but also distinct bass and baitfish. Because smallmouths are typically transient, and even more so as the water cools, the name of the game is covering water to find them. That can lead to long periods without making a cast, but the good news is that the bass follow the same highways and usually make the same stops year after year, so when you figure them out, it’s possible to go from zero to hero in a hurry, season after season. Many anglers may look forward most to the shallow bite of pre-spawn and spawning bass in the spring, but for Mueller, figuring out those fall patterns is the most rewarding challenge. “It’s probably the reason I don’t hunt,” he says.