Use Big Baits to Catch Giant Lake Trout Through The Ice

You won’t catch high numbers dropping these oversized baits, but when you do get a bite, you better hang on 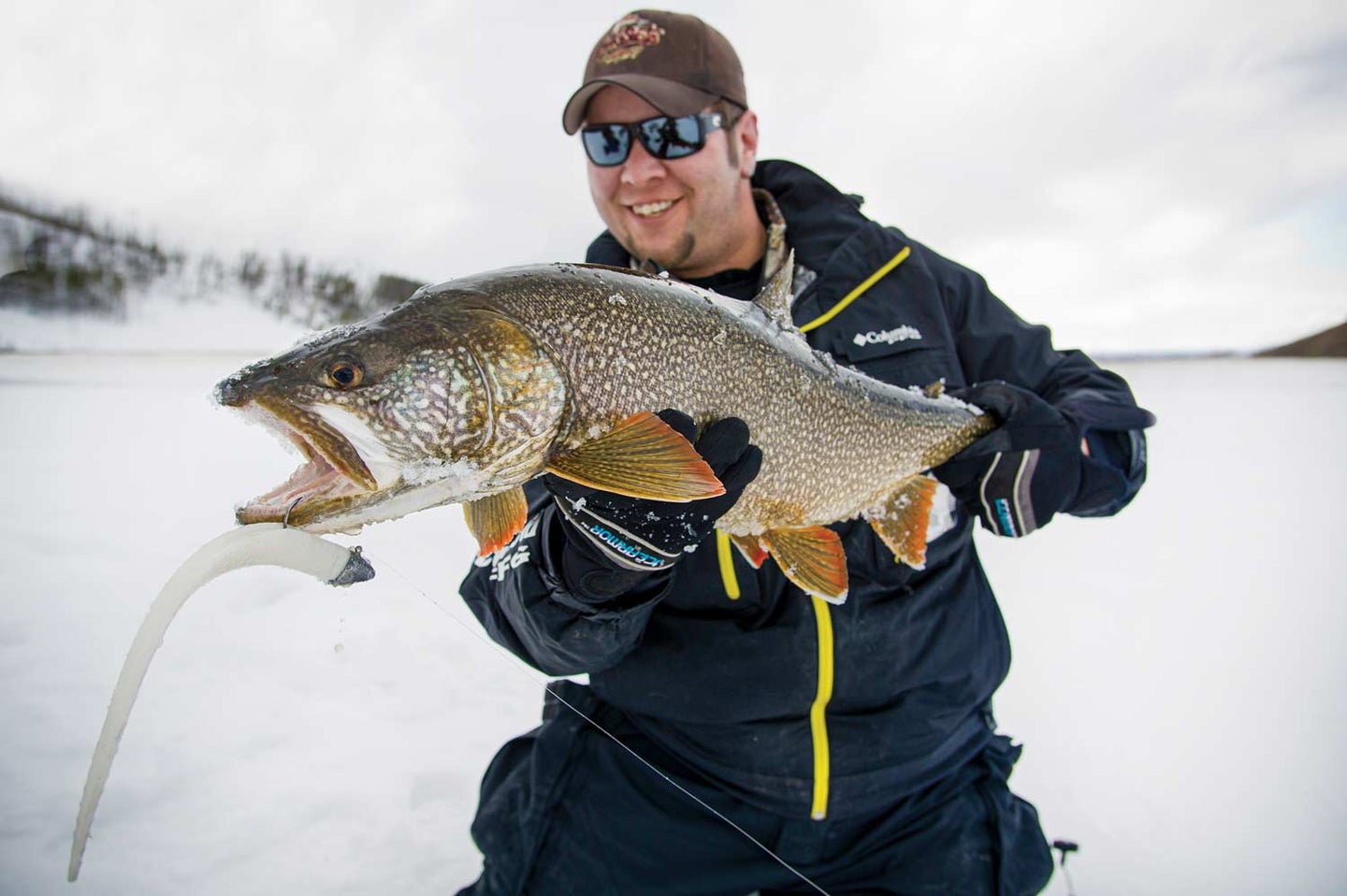 The author with a heavy lake trout from Lake Granby in Colorado. Tim Romano
SHARE

When I looked down the hole, I was shocked. There was the gravelly bottom of Lake Granby barely 3 feet below the bottom edge of the ice. As if I wasn’t skeptical enough about targeting lake trout in such shallow water, veteran Colorado guide Bernie Keefe didn’t make me feel any more confident when he tied on a 10-inch Hogy soft-plastic finesse bait. It was a popular lure for bluefin tuna on the East Coast, where I live, and something I never thought I’d see in the Rockies. But in less than five minutes of jigging, I was kneeling at the hole watching line drain off the spool. Keefe had said we weren’t going to catch numbers that day but that we’d catch big fish­—and he’d made good on his promise. If you adopt a little of Keefe’s outside-­the-box thinking on the hard water, you’ll notice that your average lake trout gains weight fast.

It wasn’t until years after my trip with Keefe that I learned the truth: I was his guinea pig. Until that day in 2011, he’d never sent a 10-inch Hogy down a hole on Lake Granby, where for years tubes had been considered the top trophy-laker lure. Keefe might not have been certain that fish would eat that monster soft-plastic as quickly as the 44-incher I ended up landing did, but he knew they would eat it. It was a perfect match for the rainbow trout that also live in Granby, and the lure’s effectiveness was a testament to a theory that many anglers disregard come ice season.

It’s common to see lures and baits scaled down in the winter months. The idea makes sense because with slower metabolisms and a generally more sluggish attitude in cold water, even a trophy walleye, bass, lake trout, or pike will be likely to snap at a smaller, more manageable target. That day on Granby, had we preferred to catch a pile of lakers in the 15- to 20-inch range, Keefe could have made it happen by tying on smaller jigs and hunting down suspended fish. But we were looking for the “right” fish, and even in the dead of winter, the big players won’t hesitate to eat a big meal if you know exactly where to serve it.

Where I dropped that Hogy was too shallow to even bother with electronics. According to Keefe, not only would the signal from a flasher hurt more than help in only 3 feet of water, but also the bite would happen so fast, the machine wouldn’t even have time to register the fish. We were fishing such skinny water because the idea of finding the bait to find the giant fish holds true 365 days a year. The smaller lake trout in deeper areas were on schools of little bait, but Keefe knew that the rainbow trout would remain in the shallows even under the ice. The key element of our location wasn’t the depth directly below us but its proximity to an edge that sloped away quickly to deep water.

“Big lake trout aren’t going to hang out in these shallows,” Keefe told me. “The only reason they’d move onto this flat is to grab a rainbow trout and then split. If there’s a laker here, it’s here to eat.”

Read Next: Catching Giant Trout on the Great Lakes

The 44-inch trout I hooked not 10 minutes after Keefe explained this did exactly what he said it would do; with my rod plunged into the hole almost to the cork grip, I could feel the tip bending back toward my feet as the drag screamed. “The deep water is behind us,” Keefe said. “That’s where it’s going.”

You can call Keefe’s play in the shallows a gamble, and in many respects it was. That day, we dropped another fish and landed another 42-incher in the same area less than 50 feet from the hole that produced the first taker. Keefe had put us in an area not where the fish are, but where he anticipated they were going to be, even if for only a short window within the day.