You can still take these reliable old pumps, autoloaders, and double guns afield…if you can find them 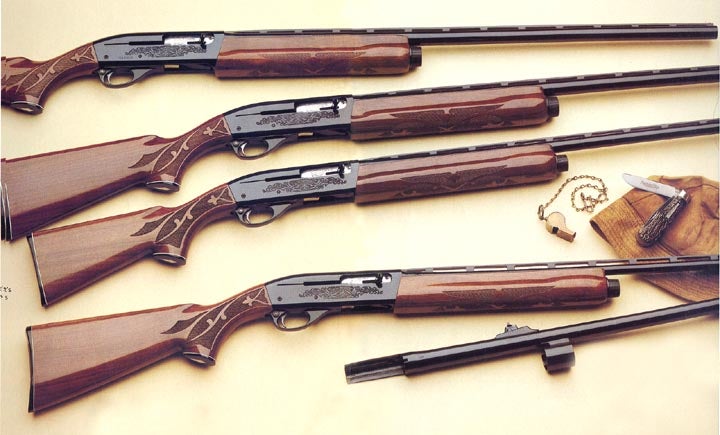 The future production of the 1100 is unknown. Remington Society of America
SHARE

Whenever our family went on vacation when I was a kid, my mother dragged me to museums. She loved to stare at priceless paintings for hours. I never much cared for them. What was the point of looking at ancient artifacts or pieces of art encased in glass? I wanted stuff I could touch and feel. That’s probably why I’ve never had much use for old, beautiful shotguns that hang on the wall and do nothing else. Yes, they are cool, and I appreciate the engineering behind all of them. But if I can’t shoot a shotgun, then I don’t see much point in owning it (maybe that will change as I get older and wiser).

Since I’m into killing birds with shotguns, not staring at them while they collect dust, there are a few out-of-production autoloaders, pump-actions, and one over/under I want to add to the gun closet. If I come across any of these workhorse shotguns—and have enough money in my bank account—I’m buying them. And you should, too.

I used to hunt the Illinois River with an old codger who shot the Mag-10. He always kept his finger just outside the trigger guard, ready to shoot. Behind his back, we called his 10-gauge “the sandwich maker” because he killed any duck—mostly ruddy ducks and buffleheads—with it at unfathomable distances, breasted out the birds, deep fried them, and put the meat between two slices of white bread. I tried to buy the gun from him once, thinking his duck career was about over, but he’s still hunting with that Ithaca every day of the season. Ithaca made an absolute tank when it built this gas-operated 3½-inch gun—it’s more than 11 pounds with a 32-inch barrel, and the gun is around 4½ feet long. You would never hunt anywhere but a permanent blind with the Mag-10, but it’s a stone-cold goose slayer, and I’d love to pit-hunt big greasy honkers with it. It was produced from 1975 until 1989, when Remington bought the design and used it to build the SP-10, which isn’t a bad option either. Just be careful what load you shoot if you buy the Mag-10, because some of the models have barrels that cannot handle steel shells. You’ll have to use Kent Tungsten-Matrix or bismuth.

I saw the Ducks Unlimited signature model of this gun at the Bass Pro Shops in Memphis years ago, and decided I had to have it. Unfortunately, the gun remains still at-large thanks to mortgage payments and private schooling for my 7-year-old. The Silver Mallard is the more well-known version of this gun. The Gold is a step up with picturesque inlays on the receiver and a trademark gold bolt-release button. I’ve shot the Silver for 15 years, and it’s the best 3-inch autoloader you can buy at that price (you can find them for less than $600). The only time it has ever failed me is at the skeet range, because light loads sometimes hang up in the action. Available in 12- and 20-gauge, the square-backed receiver makes the gun look like a Benelli, but it’s fore-end is a little bulkier than its Italian brethren. It’s one of the few shotguns I have seen dozens of folks pick up for the first time and shoot well on clay birds. A lot of young target shooters get their start with an A300 series Beretta because they are damn good guns that fit a variety of body types.

I included this gun because it’s unknown if the Roundhill Group, which now owns Remington Arms (RemArms), will continue to produce this gun. And even if they do, I doubt it will be this version with the beautiful checkering on the stock and fore-end, and scroll work on the receiver. This gun became available in 1963, and Remington made it in 12-, 16-, 20-, and 28-gauge, plus .410-bore. One of the most unique offerings of the 1100 came in 1969, when a matched pair, a .410 and a 28-gauge, were released. You could only buy them together. The Model 1100 supplanted three different Remington guns: the Browning-based 11-48 that had a recoiling barrel like the Auto-5, the gas-operated Sportsman-58, and Model 878. It was widely popular among skeet and trap shooters in the 1970s and 80s. The 12-gauge weighs less than 8 pounds, but it is a very barrel-heavy shotgun. When you swing the 1100, it’s easier to keep the barrel moving because of that forward weight, which is why so many target shooters loved the 1100.

I don’t think there is a waterfowler alive that doesn’t want to see the name Heckler and Koch, Inc. inscribed on the receiver of their shotgun. H&K stopped importing Benellis in 1997, but there are still plenty of these guns to be had. In fact, a buddy of mine walked into a gun shop in Texas a few years ago and found two—he bought them both. Up until this year, I had only shot the H&K SBE a few times on the skeet field. But I lost the bolt handle to my SX4 during a trip to Kansas this duck season, and had the chance to shoot a friend’s H&K for a few days. Once we put the right choke in it, the gun shot unbelievably well and functioned flawlessly. H&K’s are some of the most reliable inertia-driven autoloaders ever built, and you can get them for much less than a new SBE3. I’ve shot both models now, and the H&K is a better shooting gun as long as you choke it right.

This is one of the best autoloaders for small-framed hunters because it’s only 5½ pounds. It’s a long-recoil semi-auto (like the Auto-5), and you might think your shoulder would get punished by such a lightweight gun, but that’s not the case—especially with the 20- and 28-gauge models (it’s also available in 12-gauge). The AL-48 is an awesome gun if you are a walk-in hunter because it cuts down on the overall weight of your gear. If you upland hunt, I’d argue there’s no better semi-auto grouse gun than a 28-gauge AL-48 with a 24-inch barrel.

A scaled down version of the iconic Model 12, the 42 was the first pump-action .410 ever mass produced. About 165,000 of these guns were made, and a pristine model will fetch a high price tag and is considered a collector’s item. But a lot of 42s are in rough shape—some have been around for 90 years now—because they were the everyday small game guns of many hunters. I found an old one in my uncle’s gun cabinet after he passed away recently, and it has no chance of being much value to anyone but me. So, I hope to pair it with some TSS loads and shoot mallards in the timber some day. Winchester stopped producing the 3-inch gun in 1963, with a host of other models (this later came to be known as Winchester’s pre-64 era). Fabrique Natinoale (FN), the parent company of Winchester, Browning, and Japanese gunmaker Miroku, built 6,000 replicas of the 42 in the early 1990s. Most of the guns were marketed as Browning 42s and only about 850 carried the Winchester name. They are fine guns, but do not hold the value of the original models.

This was the final shotgun John Moses Browning designed; his son Val finished the gun and put it into production in the 1930s after Browning died. Production of the Superposed ceased in the early 1980s, but you can still get the gun through Browning’s international custom shop. When the over/under was first released it was available in four different grades. The Grade 1 had double triggers, but shooters could also pick a single trigger (selective or non-selective) or a twin-single trigger, in which one trigger fired the first barrel and the second trigger fired the second barrel. The twin single was eventually phased out when Val Browning developed the single-selective trigger. The Superposed, which was eventually replaced by the Citori, came in 12-, 20-, and 28-gauge, plus .410. Curiously, a 16-gauge never rolled off the assembly line, which is odd considering the popularity of Browning’s Auto-5 Sweet 16. The production of the Belgian-made Superposed was halted during WWII after the Germans took over the FN factory. Gun enthusiasts consider Superposed over/unders from the 1950s to be some of the best. If you happen to find one of the old guns, you can check here to find its serial number to see when it was made.

This pump-action shotgun was Remington’s answer to the Winchester Model 12. Winchester had trumped Remington’s M10 with the M12, so Big Green decided to produce an ultra-durable, high-end pump. It’s known for a smooth-sliding action because of the intricate and time-consuming craftsmanship it took to build the pump gun. That was ultimately its downfall. Production costs were too high for this Depression-era gun, and it never came close to surpassing the Model 12. (Winchester sold nearly five times the number of M12s compared to the M31 while it was in production.) The Model 31 was offered in 12-, 16-, and 20-gauge, plus it was available in 35 different options by the time it was discontinued in 1949. Remington ultimately won the pump shotgun wars with its 870. More than 11 million have been built.

Sure, Browning is making the A5 again, and it’s a hell of a gun. But the Belgian Auto-5 is without question the most iconic recoil-driven shotgun ever built. The A-5 was produced in Belgium for about 75 years. It is most popular with duck hunters, but it actually makes a heck of a deer slug gun. My uncle has been shooting one that belonged to my grandfather for decades and taken many whitetails with it during Illinois’ gun season. The A-5 is thought of as the world’s first successful semi-auto shotgun. It was built by FN after Winchester and Remington passed on John Browning’s design. Browning eventually worked out a contract with Remington to produce the Auto-5 in the U.S., though it was called the Remington Model 11. That lasted about 20 years until the contract expired and then FN once again shipped Belgian-made A-5s to the States. FN offered several different grades of Auto-5s before production of the gun stopped in 1999. There are many beautiful A-5s with intricate engravings on the receiver coupled with high-end walnut stocks and fore-ends.

Read Next: Are Today’s New Hunting Shotguns Really Worth the Price? Here Are 4 Used (and Cheaper) Models to Consider

The Xtrema2 was one of the best field guns ever built. Beretta calibrated the gas system so that the gun would cycle 1-ounce loads, but it was not recommended. In fact, 3½-inch shotshells ran through the gun much better than 2¾-inch target loads. This is the gun that many saltwater duck guides still rely on because the barrel can practically rust off and the gun still shoots straight. Russ Owen, who spent years guiding clients for king eiders in Alaska, relied on the Xtrema2 every day of the season, and said it rarely failed him in the brutal conditions of the Bering Sea. The gun was only offered in black synthetic and Realtree Max-4 or Hardwoods. Every camo-dipped Xtrema2 I have ever seen has had the finish worn off of it, which tells you the gun can be used and abused and stand the test of time. The Xtrema2 was priced at around $1,000 when it debuted in 2004, and you could get one today for $600-$800.