Federal Hevi Bismuth is one of the most impressive waterfowl and pheasant loads we've ever shot. Here's how it performed in the field and on the range 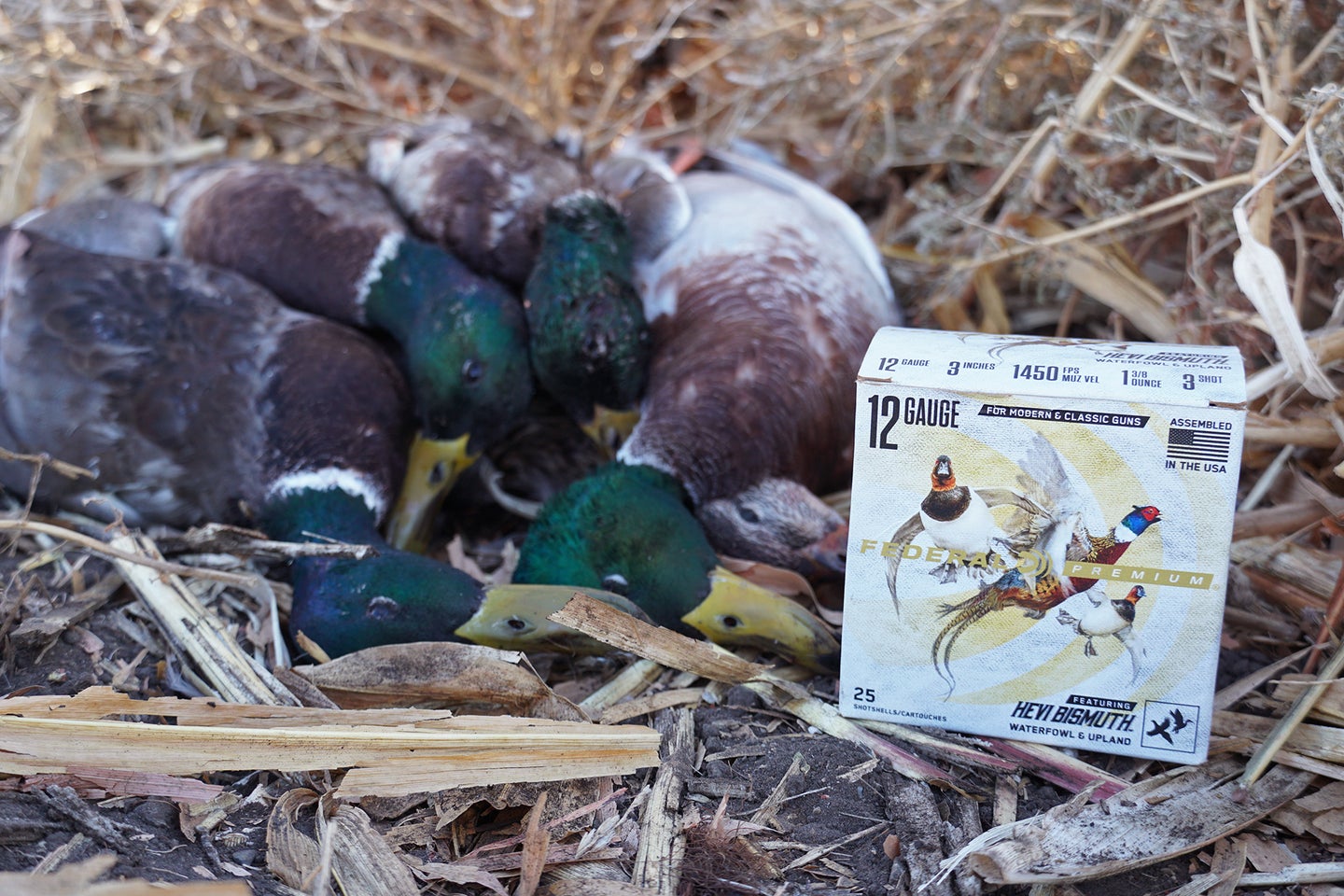 About two years ago, Federal Ammunition’s parent company purchased Hevi-Shot, a mid-sized shotgun ammo maker out of Sweet Home, Oregon, that has earned a cult-like following in the waterfowl hunting world. Those of us who follow the shotshell industry wondered what new products might crop up with Federal and Hevi-Shot living under the same roof. Now we have an answer. This year Federal is introducing Hevi Bismuth, a load that uses bismuth alloy pellets created by Hevi-Shot along with Federal’s Flitecontrol Flex wad. The result is one of the more impressive duck loads I’ve ever hunted with.

Hevi-Shot’s rise came from its expertise in metallurgy. The brand is known for creating a tungsten–iron-nickel pellet that was denser and deadlier than steel. But Hevi-Shot mixes a bismuth alloy as well (which includes tin, nickel, and some other proprietary materials). Federal says its new bismuth loads, which use these Hevi Bismuth pellets, will fracture less than competitors’ loads (more on this later), pattern better at the range, and kill birds more effectively in the field. I got the chance to hunt with two different Hevi Bismuth loads for pheasants and ducks this fall, and I patterned both over the winter. Here’s how Hevi Bismuth performed.

Bismuth pellets have a density of 9.6 g/cc while steel pellets have a density of 7.8 g/cc. When speed is equal, a denser pellet will carry more energy for penetrating a target and retain more energy farther down range. That’s really all you need to know. But if you want to geek out a little and don’t mind some physics, here’s a deeper explanation of why bismuth is more lethal than steel.

Because bismuth is more dense, you can opt for a smaller pellet size while maintaining the same amount of pellet energy.

“Pellet energy is also the same as kinetic energy, or ½ MV²,” says Adam Moser, a director of product engineering for Federal. “This is measured in foot-pounds and is analogous to data published for rifle bullets. But for small shotshell projectiles traveling at relatively low velocities, it doesn’t tell the whole story.”

The whole story comes down to “penetration energy,” which is the measure of pellet energy per cross sectional area, Moser says. In other words, it is the kinetic energy of the pellet divided by its surface area, also referred to as the 2D area of the pellet. Put more simply, it’s a measure of how well a pellet will penetrate a medium.

Keep this in mind when you look at the pattern photos below. Hunters who are used to hunting with steel loads should imagine the hits are made by No. 1 steel pellets to get a grasp on the true lethality of the pattern.

For Federal’s part, it’s contributing the Flitecontrol Flex wad. The wad is designed to contain the pellets for the optimal distance beyond the muzzle (about 15 feet) before letting the pattern expand. The Flex version of the wad accomplishes this through little slits in its side, which let air in (you can shoot Flitecontrol Flex wads through any choke style without issue). For Hevi Bismuth, Federal is using the same wads it uses in its lead Prairie Storm pheasant loads, which are known to pattern very well.

In general, the downside of bismuth is that it’s brittle, which can lead to pellets fracturing. In fact, issues with fracturing plus the higher cost of the material killed bismuth loads when they were originally introduced in the 90s. Fracturing happens on ignition, mostly with pellets in the back of the shell, which are under the most pressure. Those fractured pellets become fliers and typically don’t end up on target.

But Federal believes it has solved fracturing problems by using the bismuth alloy from Hevi-Shot. Moser said that in testing they found only 5 percent pellet fragmentation in Hevi Bismuth versus as much as 23 percent fragmentation in competitors’ bismuth loads.

Ultimately, fracturing is a non-issue if the load shoots a good pattern. So, to the patterning board we go.

Hevi Bismuth patterned extremely well in my testing. I shot 2 3/4-inch No. 5s with 1 ¼ ounce payloads and 3-inch No 3s. with 1 ⅜-ounce payloads from my 12-gauge Benelli SBE 3 using a full choke. I shot from 40 yards on a typical day for duck hunting—20 degrees with a 15 mph crosswind. I shot five patterns with each load. Here are the results (showing the average number of pellets strikes inside a 30-inch circle):

While the No. 5s shot denser patterns, the No. 3s were especially impressive. The No. 3s put a very high percentage of pellets on target proving the Hevi Bismuth pellets paired with the Flitecontrol Flex wad delivered as advertised (actually, better than advertised, as Federal engineers said they shot 70-percent patterns in their testing).

To put this performance in context, we patterned a dozen duck guns with standard No. 2 steel loads for a duck gun test last year. We shot at 35 yards, using all modified chokes (it’s not recommended to shoot steel out of a full choke). The best pattern we shot through the entire test was 124. And remember, those bismuth No. 3s are far deadlier than steel No. 2s.

So what about the pellet fracturing? I inspected my targets closely and did find some tiny tears likely made by fragmented pellets, but it was minimal. With the No. 5 loads I noticed less than a dozen fragment tears per target. With the No. 3 loads I counted fewer: less than six per target. Given the great patterning results I got, I’d consider fracturing a non-issue with these loads.

A shotshell can win on the drawing board and patterning board, but if it doesn’t win hunters’ hearts and minds in the field, it will surely fail. I think Hevi Bismuth will win hunters over—if they’re willing to spend the extra cash per box to try it.

I shot the No. 3 loads through a modified choke in my Benelli SBE 3 on several waterfowl hunts throughout the fall and had spectacular results. On South Dakota field hunts Hevi Bismuth crushed mallards over the decoys and also effectively killed snows and specks at 40 yards and beyond. Later in the fall I shot them on big, late-season Canada geese and had equally good results. In one instance I doubled on Canadas that were hovering straight overhead at about 45 yards. On another hunt I killed a greenhead that had made it through an initial volley of shooting from my hunting partners. The duck rocketed skyward into the wind, even though he had taken a few pellets from their earlier barrage. Just as he got to the edge of reasonable range, I popped up and killed him with one shot. The other guys in the blind cheered (or at least they should have).

The 2 ¾-inch No. 5s became my go-to pheasant hunting load. Just for curiosity I patterned them through a modified choke in my Browning Citori CXS and interestingly they shot better patterns than they had through the full choke in my Benelli, recording 153 hits inside the 30-inch circle. I killed about a dozen pheasants with these loads this fall and had minimal cripples. I also made the single best shot on a rooster of my entire wingshooting career. On the last day of the Wisconsin season my Lab, Otis, flushed a rooster behind some heavy brush. I could see the bird flying away at an angle, but did not have a clear shot. Knowing this could be my only chance for the day, I swung to an opening in the brush and fired before the bird got there (like a quarterback throwing the ball before the receiver turns for it) and then watched the rooster tumble down about 60 paces away. Otis was the only one around to appreciate that one.

These field anecdotes ultimately don’t mean much, but when coupled with the data gathered at the patterning board they tell an intriguing story. There are a lot of loads (steel included) that will kill pheasants and waterfowl cleanly when paired with the right choke and good shooting. But confidence in your gun/choke/load combination really does matter. If you head into the field knowing you’ve got a deadly setup, you’ll shoot better. Over the duration of the fall, I gained a ton of confidence shooting Hevi Bismuth.

Bismuth is a more expensive material than steel or lead. Federal Hevi Bismuth is coming in toward the top of the price bracket. With a MSRP of $77 per box, you’re looking at spending about $3 per shell. Here’s a breakdown of cost and density of non-toxic loads in the Federal and Hevi-Shot lineup (all in 12 gauge) ranked by price.

Is Bismuth Worth It?

But I think this load makes perfect sense for pheasant hunters chasing wild birds on public lands (many of which prohibit lead shot). Wild roosters are surprisingly tough to kill cleanly (because shot angles are almost always going away) and even the best dogs have trouble catching winged pheasants, which run like rabbits. A load that delivers high-penetration energy and tight patterns is ideal here. And with limits at only a few birds per day, you’re not going to be burning through boxes of the expensive shells anyway.

Then there are those waterfowlers who simply must have the best of everything, price be damned. I can see those guys buying Hevi Bismuth by the case. For the rest of us, Federal Hevi Bismuth might not be an everyday duck load, but it makes a lot of sense if you’re planning a big waterfowl trip for mallards, divers, or geese. You’ve already invested countless dollars in your spread, boat, guns, and gear, so why not upgrade your shells to ensure you put birds in the bag? Ultimately that’s what Federal is banking on with this pricey, high-performance load: Once hunters try it, they’re going to love it.