The 4 Benelli Shotguns That Inspired the Super Black Eagle

If you're a fan of the Benelli Super Black Eagle, you've got these four guns to thank 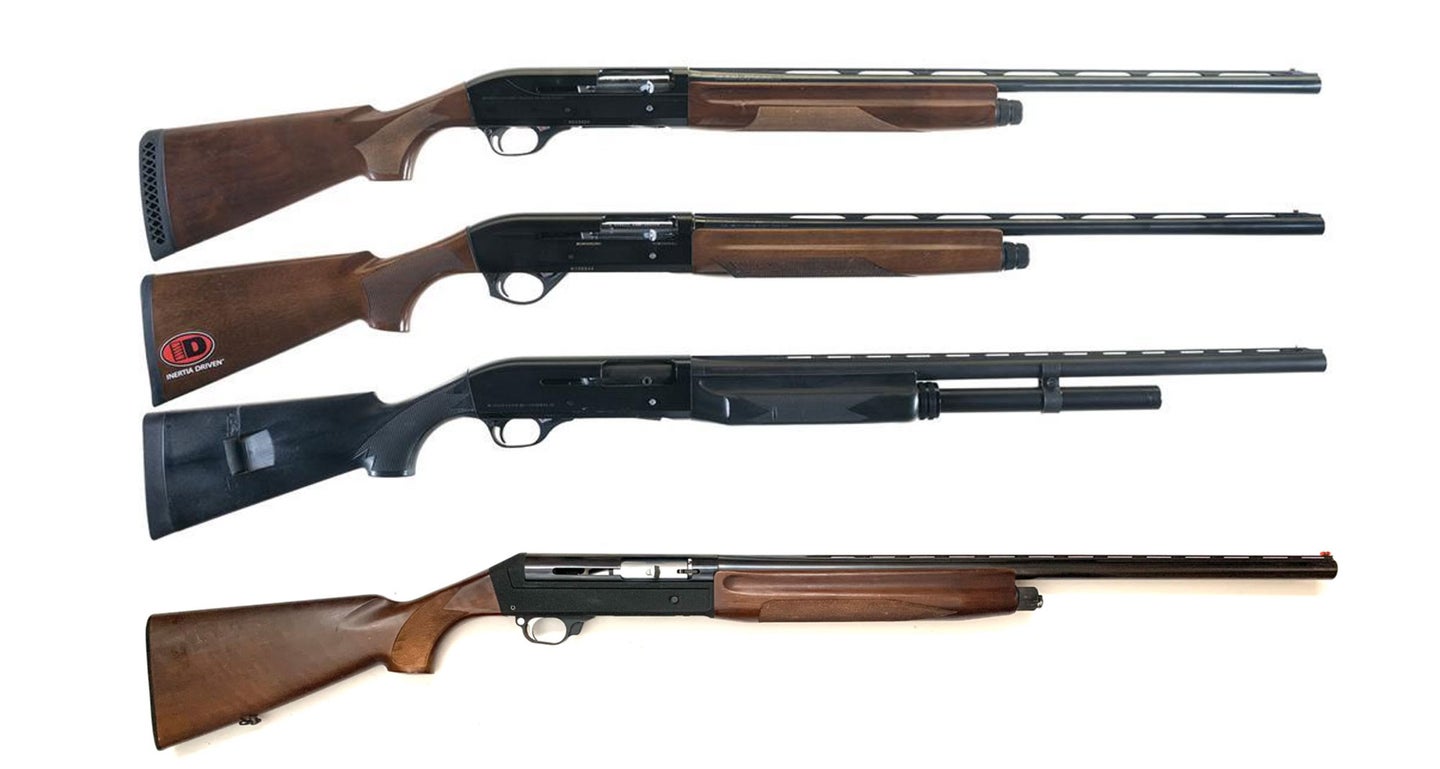 From the top: a pair of Montelfeltros, followed by the M1 Super 90, and 121, three of the four guns that influenced the SBE1. Benelli
SHARE

When Benelli began manufacturing inertia-driven shotguns and selling them in America through importer Heckler and Koch in the 1960s, U.S. shooters and hunters were incredibly loyal to well-engineered break-action, pump, and gas-driven smoothbores. But Bruno Civolani’s modern inertia operating system revolutionized the repeater. It simplified shotguns and made them run cleaner than their gas-operated counterparts, using recoil instead of gas to work the action, so the gun could efficiently eject fired hulls, and load fresh shotshells into the chamber. The recoil was much less tame in inertia guns, but they would run through anything—cold, rain, sleet, and snow—a reason why hard hunting Americans fell for Italian Benellis.

Benelli has become one of the most successful semi-automatic shotgun makers to ever enter the U.S. market despite the fact their guns have only been stateside for a relatively short time. Remember, Benelli came to America when classics like the Remington 1100 and Browning Auto-5 were still king. But just three decades later, Benelli came for the crown, launching the 3½-inch Super Black Eagle with a price tag of $1,000 (it’s since evolved into the Super Black Eagle 3). Not every hunter could afford one, but most damn sure coveted the SBE. And the H&K SBE1—discontinued in 2005—is still a highly sought-after shotgun that isn’t overly expensive, but it certainly is elusive.

However, without four early Benellis—the 121, M1 Super 90, Montefeltro, and Black Eagle—there would never have been an SBE1. To one degree or another, they all laid the foundation for what has become Italy’s—and possibly the world’s—most famous inertia-driven semi-auto platform.

The 121 started it all for Benelli here in America when it was brought to the U.S. in 1969. Billed as the fastest cycling shotgun ever made, the 121 began as a 2¾-inch inertia-driven 12-gauge, and evolved into several variants, including the more well-known tactical 121 M1, which had a short 18¾-inch barrel with a fixed improved cylinder choke. The 121 also spawned the SL201—Benelli’s first 20-gauge—in 1973 and the SL80 (1974), a 3-inch 12-gauge that was also offered in a myriad of models: 121, 123, Special 80, and Extra Lusso (the fixed choke barrels where interchangeable between each variant). The SL80 was such a solid design that Beretta—known for its gas-driven autos—later modeled an inertia-driven shotgun, the Spanish-made Pintail, after it.

I’ve never had the chance to fire a 121 series auto (they are very rare in the States), but have seen videos of the guns being shot, and the action, which had no rotating bolt head like modern inertia shotguns do, ejects shells incredibly quick. There are legendary stories of the platform being able to cycle through five shells before the first empty hull hit the ground. The recoil was stout on the 121s as there was no recoil reduction system or buttstock pad. Since the gun weighed under 8 pounds (some were as light as 6½ pounds), it could be difficult to stay on target by the time you emptied the magazine, particularly if you were shooting the M1 tactical that held eight shotshells. The gun’s ability to shoot quickly would have given recoil less time to disperse and the shooter less time to recover. One quirk with this gun: there was initially no magazine release lever on the auto-loader, which meant you had to load the first round into the chamber manually. You could load the magazine tube with shells but could not drop a shell into the carrier from the magazine, and rack the bolt to load it like you can with modern semi-auto shotguns. It was done as a safety measure so the magazine could be loaded, but if someone unfamiliar with the gun picked it up, they would not know how to operate it unless they knew a shell needed to be withdrawn from the magazine tube and inserted into the chamber.

Eventually, a “Benelli Button” was engineered so a shell would drop into the carrier when pressed, meaning shooters no longer had to manually load the gun. The two-piece receiver of the 121 is still being used today in the SBE platform. Removing the trigger group was slightly more complex though. To drop it out, you had to slide the group past a solid piece of metal on the underside of the receiver. Retay has a similar design with its Turkish inertia guns, and it can be a little tricky to re-insert the trigger assembly.

If you are a Super Black Eagle loyalist, it’s the 3-inch M1 Super 90—introduced in 1986—you must thank. Designed after the SL80, the M1 was the first Benelli to sport a rotating bolthead. It was offered in 20- and 12-gauge in barrel lengths from 18 to 30 inches. It also had screw-in, flush mounted chokes (IC, IM, M, and F). Capable of shooting steel safely—excluding the full choke—it has become a legendary shotgun among wingshooters. The H&K Super Black Eagle 1 gets more press, but this auto can be had today for as little as $700 (if you can find one) and it’s every bit the gun the SBE1 was if you don’t care about the extra half-inch of chambering.

A retired snow goose guide buddy of mine owns the M1 Super 90 and grumbles about duck hunting with any other gun besides the Benelli because it’s so reliable (this is despite the fact that his closet is full of old workhorse wood and steel smoothbores). Another salty gun writing contemporary of mine used the tactical version of this gun (18-inch barrel) to school me on skeet during our lunch breaks more than a decade ago. At the skeet field, I saw him break 25 straight on countless afternoons. He’d also take wads of cash off unsuspecting know-it-alls with high-dollar over/unders using the short-stocked (under 14 inches) M1, which speaks to the incredible versatility, accuracy, and fit of this gun regardless of its barrel length or length of pull.

Benelli also offered the M1 Super 90 in a deer slug model, and you could buy the gun in synthetic, or camo finishes in addition to the wood stock and fore-end option. You will find the finish on the receiver to be nearly impenetrable on the M1, but the exterior of the barrel was not treated with the same care on some M1s and can develop surface rust quite easily. Benelli made the M1 Super 90 available again (though not in the U.S.) in 2019. It’s offered in matte black only and looks more like a price-point M2. The main difference between the M1 Super 90 and the current M2 is the recoil reduction system. Benelli’s M2 has the Comfortech system, a series of interlocking shock-absorbing chevrons located in the stock, which makes it much more pleasurable to shoot. Most M1 shooters will slip an aftermarket recoil pad on the stock of the Super 90 to make it more tolerable to shoot.

Because of its name and aesthetics, I doubt most core hunters consider the modern Montefeltro to be a hard-as-nails shotgun that can stand up to nasty weather and abuse, but the original Standard Hunter Super 90 was marketed as just such a shotgun when it debuted in 1988. Before it was discontinued in 2011, this model was offered in 20- and 12-gauge with a 3-inch chamber. The original Montefeltro had an aluminum receiver (like so many Benellis do) to cut down on weight and was available in a right- or left-handed variant. Barrel lengths included 21-, 24-, 26-, and 28-inch offerings with Varichoke screw-in chokes (new Montefeltros have the updated Crio choke system).

There was a walnut stock and fore-end model as well as matte black and Realtree camo options with a magazine capacity of 4+1. The magazine tube isn’t as easy to access on the Montefeltro as the SBE platform. Its tube is threaded into the receiver with Loctite (there is no magazine cap at the top of the tube). To separate the mag tube from the receiver, you will likely have to heat up the area were the two components come together (it must get very hot, but don’t use an open flame), and unscrew it with a strap wrench or some other device while the gun is held in place by a vice. In all, there are at least 11 models of the Montefeltro, many of which came out after the H&K SBE1, which was built on the Montefeltro action.

The 12-gauge Black Eagle is one of the most mysterious Benellis because it was only imported by H&K from 1989 to 1990. Now, there was a competition model that ran until 1997. It was built to handle lighter loads, had a silver finish on the lower receiver, and was available in 26- or 28-inch barrel configurations with five screw-in chokes. The field model had a 3-inch chamber and used the same action as the Montefeltro. In fact, the Black Eagle was much the same shotgun, and was available with either a wood or black synthetic pistol grip stock and forearm.

Barrel lengths ranged from 21 to 28 inches and the deer slug variant, which was discontinued in 1991, had a 24-inch rifled barrel with mounting bases on the receiver for adding a scope. The Black Eagle was only available in a right-hand model (likely because it had such a short run in the states) and resumed production briefly in 1997. Today, the Black Eagle lives on in Europe. Our Super Black Eagle is sold as the Black Eagle across the pond chambered for 76 mm, which measures just under 3 inches. In 1994 Benelli produced 1,000 limited edition Black Eagles with high-grade checkered walnut and golden inlays on the sides of the receiver. According to Blue Book of Gun Values, a mint LE can fetch $2,000.