10 Classic Shotguns Every Wingshooter Should Own 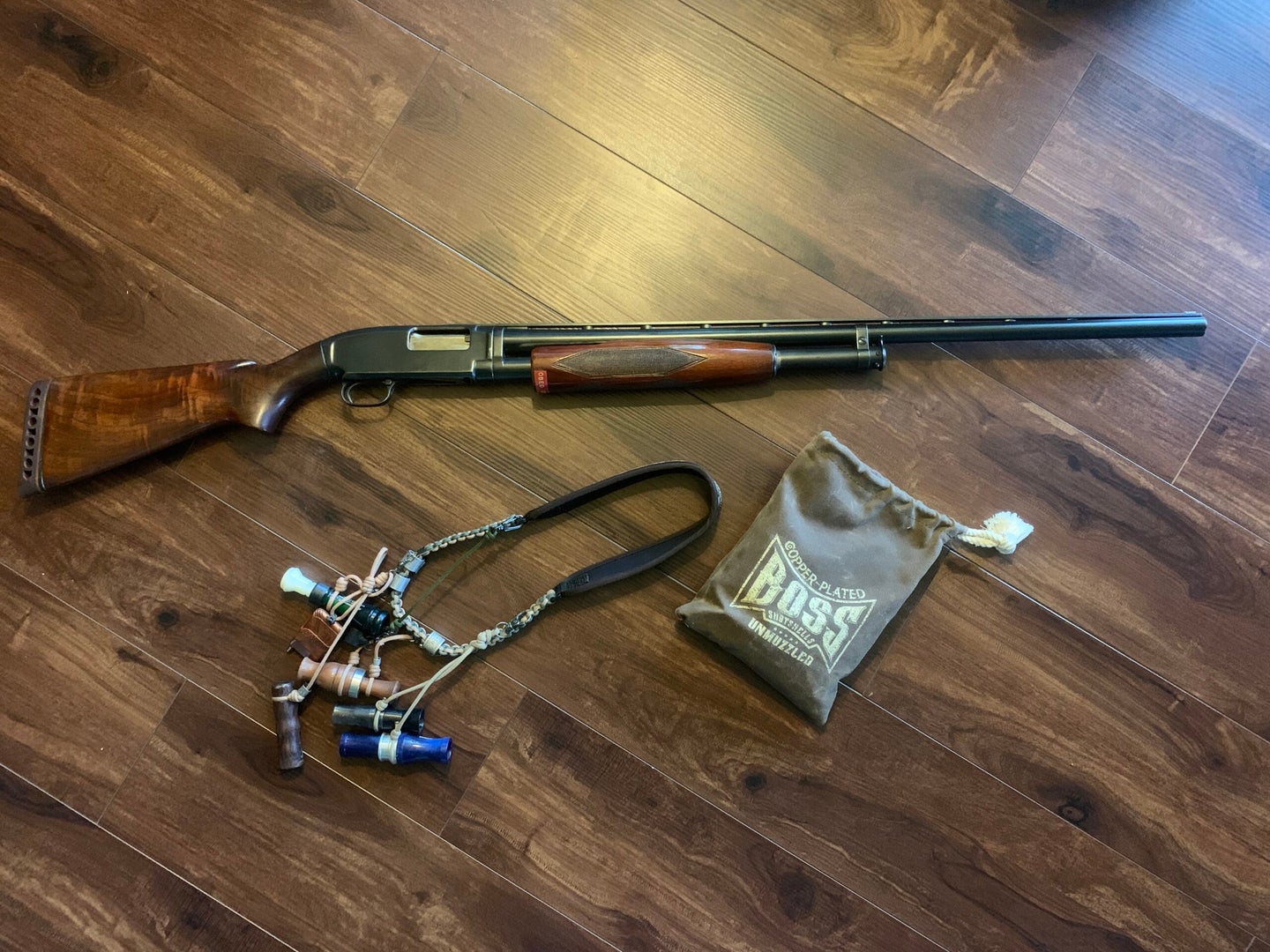 The author's Winchester Model 12, which belonged to his grandfather. Joe Genzel
SHARE

All wingshooters—regardless of age—should have an appreciation for walnut and steel classics. Those shotguns built the foundation for today’s smoothbores and they’ve earned their place in our hunting heritage. The work of early shotgun engineers, like Crister Sjogren, John Browning, and his son Val, plus a host of others, is still impressive and influential today. These men not only designed historic shotguns; they had to invent highly-functional operating systems hunters could rely on. For instance, John Browning’s long-recoil Auto-5 was so advanced when it debuted in 1902 that no other American shotgun manufacturer produced a successful semi-auto platform for a half-century. It wasn’t until after World War II that Sears, Roebuck & Co. launched the gas-driven Model 60 and Remington released the Sportsman 58. For more than 50 years, no one could touch Browning’s ingenuity.

You can argue that many older shotguns are simply built better and will continue to hold their value longer than modern ones. And those are two important reasons why you should add as many of these iconic repeaters and break-actions to your gun closet as possible. These classic old shotguns are about more than just nostalgia, they will serve you just as well as any current model (as long as the gun is in good shape). With that in mind, here’s my list of the 10 classic shotguns every wingshooter should own.

Every great gun room has an old Beretta A300 series shotgun in it, and the best of those gas-operated smoothbores was the 12-gauge, 3-inch A390 Silver Mallard. This gun, which went into production in the early 1990s, was also offered in a 20-gauge model and a Gold Mallard model—which is the same gun with enhanced exterior features such as an engraved receiver. Many young or new shooters start with an A300 series shotgun because they point well, swing easy, and recoil is tame. This auto-loader weighs just over 7 pounds and has a slick trigger pull (my personal A390 has a trigger weight of under 3½ pounds). You also don’t have to clean this semi-auto as frequently as most gas-operated platforms. I typically just wipe down the action a few times during duck season and it runs fine. It’s an easy gun to field strip, but full disassembly is painful. The best part: you can still find this gun for $700, and it will never die on you.

The Super Black Eagle has the M1 to thank for its widespread popularity among duck hunters. Both guns share the same inertia-driven recoil system, but the M1 was a 3-inch auto and the SBE shoots 3½-inch shells. But pressed to choose between the two (and I had to for this article), I’d take the M1 because you can still buy it—if you can find one—for less than $1,000. The M1 came in 24-, 26-, 28-, and 30-inch barrel options, plus there was a tactical model that had an 18-inch barrel. Slug barrels were made for this model as well. Available in 12- or 20-gauge, the 12 tipped the scales at 7.2 pounds thanks to a lightweight aluminum receiver. Recoil on the M1 was stout, but you can mitigate that with an aftermarket recoil pad.

When the Xtrema2 debuted in 2005 it quickly became one of the best gas-operated semi-auto 12-gauge goose guns ever manufactured. Chambered for 3½-inch shotshells, this Beretta was equipped with a Kick-Off recoil reducer in the stock, which used hydraulic dampeners to mitigate recoil produced by the magnum loads many honker hunters relied on. The three-part gas system was a simple one, and the recoil spring was located on the magazine tube, making it far more accessible than many other Beretta models that house the spring in the stock. Beretta used an Aqua coating to protect the Xtrema2 from rust, and I can attest it holds up well to moisture. A buddy of mine has this reliable gun, but an unreliable duck boat, and has had to paddle home using the Xtrema2 as an oar on many occasions. The gun has held up incredibly well after years of dipping it in the Illinois River.

Gas-operated shotguns existed before the 1100, but it was deemed to be the first successful one, and changed the smoothbore landscape forever. Because of its soft recoil, wingshooters and target shooters flocked to the 1100, which was available in every gauge but 10. Early models built before 1986 have fixed choke tubes, and a majority of 12-gauge 1100s were chambered for 2¾-inch shells, but there were also 3-inch magnum variants. By today’s standards, the 1100’s gas system was complex. A pair of metal friction rings and rubber O-ring slid over the magazine tube. The metal rings sat near the piston and gasses were bled through ports in the barrel ring to drive the piston backwards and work the action. The weight (8.1 pounds in 12-gauge) works in concert with the operating system to produce very little felt recoil. Two sticking points with the 1100: It had to be kept extremely clean to run properly, and the O-ring would wear out and need replacing for the gun to function reliably.

Remington’s 870 might not be the best pump shotgun of all-time—the gun it replaced, the Remington 31 was certainly better (and more expensive)—but for the money, it’s without equal. That’s why more than 11 million have sold since the 870 came into production more than 70 years ago. Back then, you could buy a Wingmaster for $70. The pump runs on dual-action bars that are nearly impossible to bend or break. The 12-gauge 870—they come in every gauge but 10—was built on a the 16-gauge receiver of the semi-automatic 11-87 to keep it light (around 7½ pounds) and trim. Wingmasters are almost fail proof. I’ve seen 870s that need a firing pin replaced or a load gate fix, but most will run no matter what hell you put them through. The hardwood fore-ends and stocks are just as durable as the solid blocks of steel the 870’s receiver is made from.

John M. Browning’s last gun—he died while designing it—was the Superposed, a 12-gauge over/under that his son Val finished in the early 1930s. The first 20-gauge Superposed appeared in 1949 once production began again after the Nazi occupation of Belgium, where the shotgun was built, during World War II. The 28-gauge and .410 came into production by 1962. John Browning chose to build the Superposed as an over/under so it would appeal to Americans who had become accustomed to shooting single barrel repeaters (the sight planes are similar). At the time, over/unders were popular in Europe but too expensive for the U.S. market. The break-action pivoted on a full-length hinge pin that made the frame taller than spendy O/U’s from across the pond. The Superposed proved durable and the pin was easy to replace should the gun need a rebuild. Browning replaced the Superposed with the Citori, taking it out of production in 1977, but special runs of the gun continued into the 1980s and 90s.

Former Field and Stream shooting editor Bob Brister referred to the Super X1 as the shotgun reliable enough to perform in a sandstorm. There were only 85,000 produced from 1973 to 1981—they were simply too expensive to produce and were up against less expensive Remington 1100s and the Auto-5. The 2¾-inch 12-gauge gas gun was designed to handle like the Winchester Model 12 and was built from all milled parts. I shot this gun at NILO Farms, Winchester’s hunting preserve, in the spring of 2022. It’s a well-balanced shotgun with much of the weight centered between the stock and fore-end. SX1s are only offered in fixed choke barrels (skeet and field), but you can have the barrel threaded for modern chokes. The bolt buffer does need replacement at times. It can crack or shatter. If that happens, the bolt will not function properly.

The Auto-5 was so well engineered it enjoyed an almost 100-year run before being discontinued in 1999. The platform was such an advancement in technology, it took a half-century for another American gun manufacturer to think up another auto-loading design. A long-recoil auto-loader—the barrel traveled backwards with the bolt, then they separated briefly to eject a spent shotshell and then collect a fresh one—the Auto-5 was first offered in a 12-gauge and later a 16 and 28 joined the lineup. Browning’s Auto-5 was built in Belgium, taken over by Remington (as the Model 11) during World War II, and then operations were moved to Japan in the 1970s as production costs rose. The Japanese-made Auto-5 had a nitride coating on the magazine tube; Belgian A5s needed oil regularly applied to the tube to function. Invector screw-in chokes were added to the Japanese Auto-5 in 1983, a feature not included on the Belgian models. It was offered in every configuration you could want and was an absolute workhorse. The platform simply would not fail. A friend of mine had an Auto-5 that never malfunctioned until he dropped it in the snow one cold morning before a duck hunt and the action froze shut.

Designed by T.C. Johnson, who used the Browning 1897 for inspiration, the Model 12 was first offered in 20-gauge before 12, 16, and 28 were added to the lineup. The .410 version of this classic pump—the Model 42—was built in 1933. Dubbed “The Perfect Repeater,” the Model 12 was made to fit a wide variety of shooters. I have my grandfather’s M12 and can attest it is one of the most accurate smoothbores in my gun closet (I shoot it only occasionally). The standard 12-gauge was chambered in 2¾-inch, but there was also a 3-inch Heavy Duck option. Some early 20 gauges had 2½-inch chambers and the 16 gauges were offered in 2 9/16ths for a time. The Model 12 was a favorite of Ernest Hemingway, who took the gun on his famous three-month safari to Africa.

An absolute beast of a shotgun, the Ithaca Mag-10 was an 11-pound tank that goose and turkey hunters of the 1970s and ‘80s had to have. The first gas-operated 10-gauge auto-loader, the Mag-10 had a 32-inch barrel (the shotgun was 4.5 feet long) with a fixed full choke. The CounterCoil system was built into the front of the magazine tube to reduce recoil, but that meant that you could only load two shells into the magazine, which wasn’t much of an issue considering most hunting pursuits only allow three-shot guns anyway. It was discontinued in 1989 when Remington bought the the rights and began production of the SP-10.