Mossberg is known for building practical defense-style pumps and auto-loaders that perform. The 940 Pro is the next step in that evolution 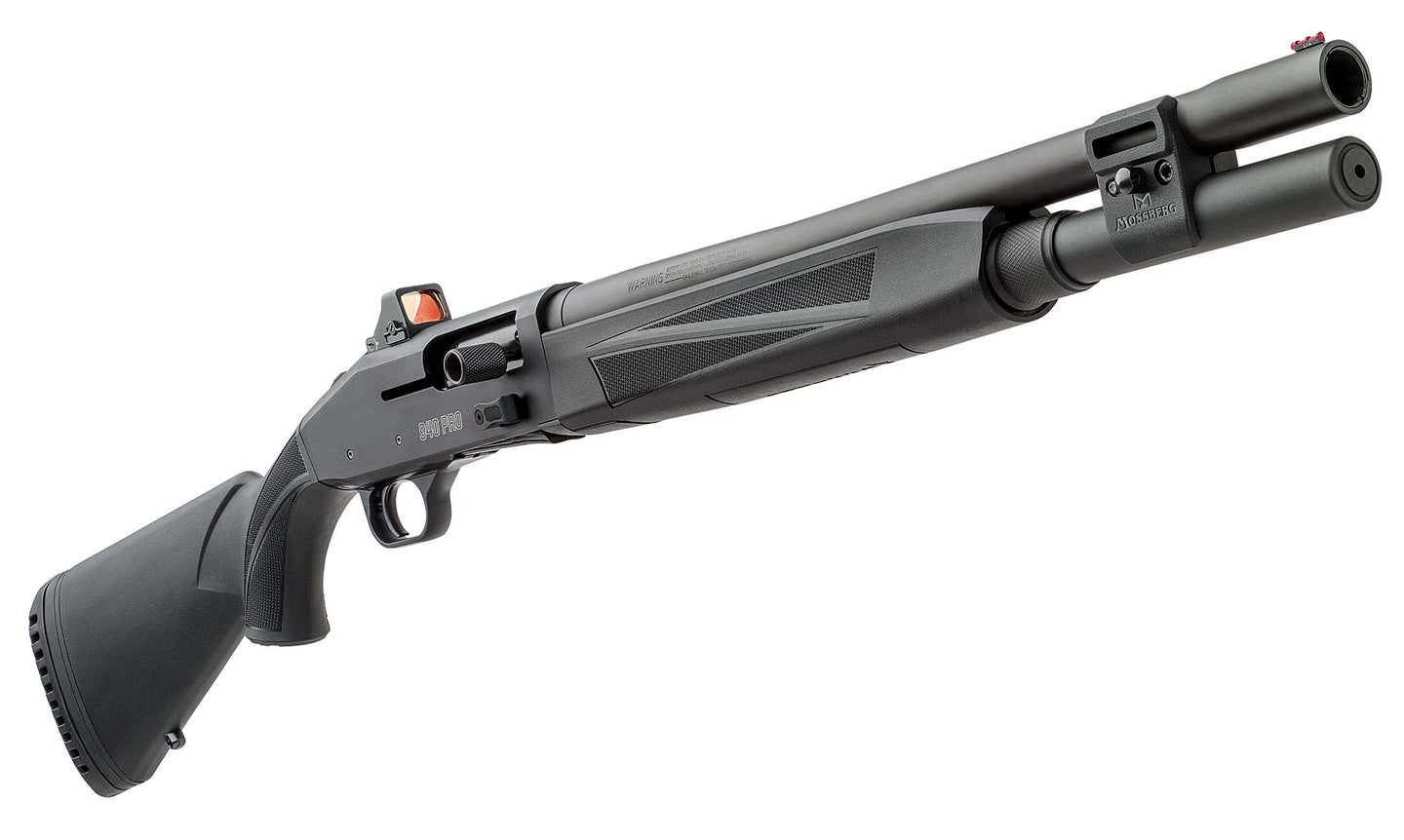 Mossberg has proven itself as an innovative manufacturer of auto-loading and pump-action shotguns, in particular smoothbores built for personal defense and multi-gun competition. Their latest semi-auto, the 12-gauge 940 Pro Tactical comes on the heels of the 590S pump, another versatile platform offered in a traditional shoulder-mounted shotgun and pistol grip variant called the Shockwave. Although the 940 lacks the pump gun’s ability to fire 1¾-inch “shorty” shotshells, the Pro Tactical combines several noteworthy features in a no-nonsense, personal-defense package.

Mossberg debuted the 940 series with the JM Pro Competition at the 2020 Shot Show. Waterfowl, turkey, and now this tactical model, which can also serve as a competition gun, followed (read our full review of the Mossberg 940 Pro Turkey here). The platform has a redesigned gas system that includes a new piston and sleeve that rides over the magazine tube so that the gun runs cleaner and more reliably.

It’s an evolution of the 930 series that allows shooters a more customizable experience. For example, the 930 could not be adjusted for length of pull, only drop and cast. You can add or remove spacers in the 940 to lengthen or shorten stock fit. Also, in the turkey and tactical 940 variants Mossberg made cuts in the receiver to mount a Shield RSMc-style red-dot reflex sight. As a result, the Pro Tactical, and the other 940 models are some of the most user-friendly shotguns Mossberg has built to date.

The defining feature of the 940 Pro Tactical is that it’s drilled and tapped for a low-profile Shield RSMc micro-dot reflex sight at the rear of the receiver. At the recommendation of Mossberg’s Linda Powell, I mounted a Holosun HE407K-GR to the 940. With a length of 1.60 inches, a height of .98 inches, and weighing 1-ounce, it’s unobtrusive yet easy to acquire the target through when you mount the gun.

The Holosun has a 6 MOA green dot, 1X magnification, and 1 MOA click adjustments. It runs on CR1632 batteries and turns on when you pick up the gun and shuts off automatically when the gun is at rest. There’s no on-off switch to worry about. That’s a real plus considering the 940 Pro’s purpose is to eliminate a threat. You may not have time or may not be able to find the on switch in an emergency. If you choose to shoot the 940 Pro without an optic, it does have a red fiber-optic front bead to use as a reference point for target acquisition.

Exterior Features of the Mossberg 940

You can tell Mossberg built the 940 Pro for ease of use, an important component of any shotgun, but especially defensive semi-autos that shooters have to be able to operate under duress and at times in the dark. The oversize bolt handle and oversize bolt release button are readily accessible and simple to manipulate. Many folks employing a tactical semi-auto shotgun—as opposed to a pump—don’t want to leave a round in the chamber due to safety concerns, and the 12-gauge makes racking a 2¾- or 3-inch load from the magazine tube a snap.

Mossberg’s tang-mounted safety also allows shooters to click the gun off safe quickly no matter the circumstance. A tang safety is also more convenient if you need to shoot with your off hand in a tight spot. That way you’re not reaching across the trigger guard from a left-handed shooting position. Plus, most auto-loaders place the safety at the front or rear of the trigger group. In my opinion, when you are in a high-stress situation where your life is at stake, it’s quicker to have the safety at the tip of your thumb so your trigger finger can stay closer to the trigger.

I found loading the seven-round magazine a breeze. There was no stiffness or thumb pinch in the beveled load gate or magazine tube when inserting shotshells because Mossberg re-engineered the gate, making it larger and thus easier to load multiple rounds at once, which competition shooters will appreciate.

The recoil pad is a beefy 7/8 of an inch and proved effective at taming recoil. The 940 includes a set of inserts to adjust the length of pull from 12.5 to 14.25 inches.

Fore-end and stock are synthetic and finished in tactical basic black. The pistol grip and fore-end are textured to allow for a firm grasp if your hands become wet or sweaty.

A Look Inside the 940 Pro Tactical

To allow the gun to cycle shotshells with reliability (which the 940 did during my test sessions) Mossberg applied a nickel-boron coating to the gas piston, magazine tube, hammer, and sear. There is also a buffer tube that slides over the outside of the magazine tube to keep moisture and carbon build up to a minimum. This is an upgrade from the 930 and 935 series shotguns that used a gas-operated pusher system in which two metal rods pushed the bolt backwards when you pulled the trigger.

The recoil spring of the 940 Pro also slides over the magazine tube. I prefer this over a spring that is placed inside the stock, which is the case with many of Beretta’s gas-driven autos. The stock system is not flawed it’s just more work to clean it because you must remove the buttstock with a screwdriver and typically unscrew another nut that holds a hydraulic cylinder in place.

Although the 940 Pro has a 3-inch chamber, I patterned 2¾-inch loads only. Why? Well, since it’s a tactical shotgun, the longer 3-inch shells decrease magazine capacity and add recoil while only giving you a few extra pellets per shell if you’re shooting buckshot. The only reason I would shoot 3-inch loads in a defensive shotgun is if the gun shop was out of 2¾-inch.

I zeroed the 940 with Federal TruBall 1-ounce slugs at 25 yards using the Holosun sight, shooting a cloverleaf pattern close to dead center. The plastic wads proved a formidable projectile as well, impacting several inches away from the slugs.

Next up was Federal Premium Personal Defense 00 buckshot. The cylinder bore choke put all nine .33-caliber pellets in a four-inch cluster centered a bit to the right of the 3-inch orange oval aiming point of the target.

I did not adjust the Holosun between shooting slugs and the two buckshot offerings because I wanted to see how all three loads performed at the same zero. That said, a few clicks to the left would have put the nine-pellet 00 Federal payload dead center of the target. Whatever load you choose, be sure to pattern it—and adjust the optic—for optimal results.

Also, it’s impossible to hypothesize as to the best buckshot-choke combination for any gun. And though there may be a better option than the included cylinder bore tube, Mossberg’s stock choke performed admirably with 00 buckshot (and slugs). It did not like the No. 4 buckshot as much, but an aftermarket choke or possibly just a tighter choke may yield better performance from the Remington ammo.

I patterned the gun with Federal Top Gun target loads with a payload of 1-1/8-ounce of 7½ shot as well. At 25 yards, using a 24-inch square target, it produced 279 strikes out of 394 pellets (71 percent). The circle was divided into four quadrants, and the shot dispersion was fairly even, though the lower half of the paper soaked up more shot. From the top left clockwise to the bottom left, the pellet counts were as follows: 62, 57, 87 and 73.

How the Mossberg 940 Pro Tactical Handled

For years. I have shot rounds of American skeet to see how well tactical shotguns handle. Clay shooting allows you to move the gun more than you would shooting stationary targets. And though you would not shoot an intruder in this manner, it gives you a better sense of the weight distribution and balance of the shotgun.

For instance, the 940 weighs 7½ pounds unloaded but it’s only 37½ inches long. Unlike a sporting shogun, which is several inches longer, the 940 must distribute that weight evenly over a smaller footprint. On my rounds of skeet, I felt it was reasonably quick handling, though more of the heft is going to be at the front of the gun to start if the magazine is fully loaded.

Felt recoil was manageable in this gas-driven semi-auto. Shooting slugs and buckshot from a lead sled was tolerable and with target loads, the gun could well be described as soft shooting. My go-to smoothbore for just about everything has long been a recoil-operated Benelli Super 90 Police, but the Mossberg was much easier on my old shoulder and functioned just as reliably.

The 940 Pro’s trigger broke at a reasonably clean 4.5 pounds. That’s not a light trigger pull, but it’s not heavy enough to pull you off target in a close-quarters home intrusion when you’re shooting a gun that weighs over 8 pounds fully loaded.

Throughout the test, I shot several boxes of 2¾-inch target loads and five-packs of slugs and buckshot without malfunction. I mixed in full magazine of 3-inch loads, and the gun never failed to cycle.

Versatility in a Tactical Shotgun

Defensive shotguns can be used in a myriad of ways. Sure, the 940 caters to personal protection, but since its initial offering was as a race gun, it’s built for competition. The Mossberg could also serve as a truck gun, and if you are a small game or predator hunter—coyotes, bobcat, raccoons, and fox—this auto-loader is plenty capable.

I enjoy shooting tactical shotguns on skeet and trap as well, but that’s due to my small frame (defensive smoothbores are often shorter that sporting shotguns). However, with an adjustable length of pull out to 14¼ inches, larger shooters could have success with this semi-auto. That said, it is not an ideal clays gun, mostly due to its short 18½-inch barrel.

How Mossberg Could Have Improved the 940 Pro Tactical

The optic-readiness of the 940 is the strongest feature of the gun, followed by the ergonomics, and size of the controls and loading port. But an optional low-profile rifle-like rear sight and a blade front sight instead of the fiber optic front would be a nice addition. If your optic fails, target acquisition is much easier with such a feature.

Including more stock choke options than cylinder bore that arrives with the gun would also be welcomed for experimenting with different sizes of buckshot to optimize pattern density.

Read Next: Why a Shotgun Is a Great Option for Home Defense—Plus 3 Guns You Should Buy

Mossberg’s improvement in shotgun engineering over the last 10 years has been impressive. A decade ago, few would have considered paying $1,100 for one of their semi-autos, but the new, cleaner-running gas system in the 940 Pro series brings added reliability and makes the gun worth its price tag. There are a pile  of tactical options at your disposal, but if you’re in the market for an accurate, soft-recoiling defensive shotgun, the 940 is a fine choice.