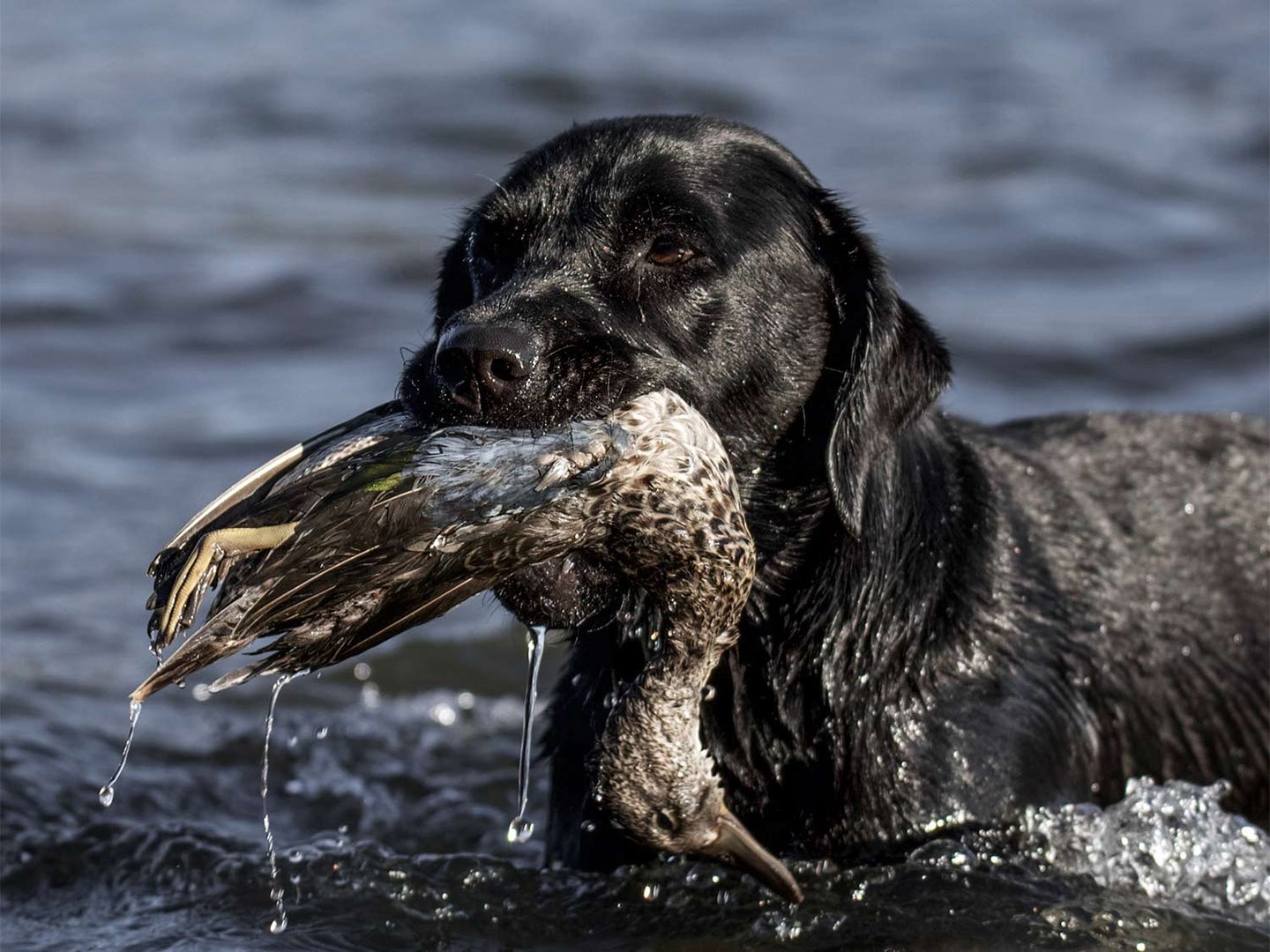 Early teal is a great time to get your Lab multiple retrieves, just be mindful of the heat, and if you hunt the south, gators. Brooks Lindquist/Lucky Duck Decoys
SHARE

There’s not much difference between a knowledgeable teal hunter and opportunistic one. You actually have to be a bit of both when hunting blue-wings during the early September season. Once you find the teal and pound on them, they are going to seek refuge like any other duck. But if you do find them again, you’re almost assured a good hunt. They aren’t wary birds, and love spinning-wing decoys more than a country boy loves Hank Williams. Consistently locating teal is the key.

Over the years, both of us have found different ways to target blue-wings (you can shoot green-wings and cinnamon teal during September as well). But we live in two very different states in terms of teal habitat. Weimer has plenty of it in Missouri, while I have limited access here in Illinois. He can typically shoot teal all season and has a better season framework than me (his starts later, and times the migration better). So our strategies are different. Weimer is looking for multiple good hunts per season, and I am looking for one or two. Both of our strategies work when the teal are in, so if you’re looking to bag more blues this September, try these unconventional tactics. —J.G.

The teal were more than a mile from the truck, and we had to stomp through knee-deep mud to get there. But if we could get to the birds, it would be a slam dunk. So I told my buddy to leave the floaters in the truck bed because it was 85 degrees and we were both going to be sweating enough as it was. We arrived at the hunting spot in just enough time to flip two spinners on and lay down in some nearby brush. The blue-wings came in perfect and we almost shot a two-man limit, ending it one bird shy because the teal were coming in such big groups we didn’t want to risk shooting over the limit (you can kill multiple birds with one shot since teal ball up so tight together when they finish at the spinners).

I’ve used that tactic many times over, particularly on mud flats where the bottom is soft and the water is in short supply. I typically employ four to five spinners—at least one of which will be an on-the-water spinner—with no floating decoys, but will bring mallards and/or goose silhouettes at times because they are so packable. Teal don’t seem to key in on floaters like other puddlers and divers do during big duck season, at least not on the smaller waters I hunt. All of the marshes I’m in are public and everyone else is hunting over the same blob of decoys and one or two spinners. My spread has more motion in it than most, plus it looks different. And anyone who has hunted ducks or geese for very long knows that being as unconventional as you can with decoys often sparks birds’ curiosity.

I use a mix of Lucky Duck, Mojo, and Higdon spinners, but they are not species specific. I do use pintail and teal spinners, because they are smaller and lighter than mallards, but will also pack dove spinners since they are inexpensive and less cumbersome. Since I am making long walks into most of these spots (or riding a bike), it’s nice to throw a few motion decoys in my pack, grab my gun case (I use bungee cords to hold the stands for the spinners to the case), and head down the levee. It also makes it much easier to pack up and move to another area if I see birds flying in a different location. Just a caution: Some public areas require you to hunt over a certain number of decoys (typically a dozen). It’s an arbitrary rule, but check the site regulations before you go. I don’t want you getting ticketed. —J.G.

A few years ago we had a big flood in September. It was a bad deal for farmers, but good for teal hunters. A 280-acre field I had access too was completely underwater and it was holding tens of thousands of teal. So of course, on the opener we set up right where they wanted to be and killed limits quick. But after we were done I got to thinking that it would be nice to hunt that population of birds all season long. Another banger hunt in there, and the teal would likely bug out for safer waters. I told my buddies, “Why don’t we just try and traffic these birds instead of killing them one more time on the X?” They thought I was nuts.

Every single bird was on the south end of the field, and I decided the next morning to set up on the north end. I did make a pretty big footprint, throwing out four-dozen teal floaters and another three- to four-dozen puddle duck decoys (pintails, mallards, etc.). The people driving by on the two-lane highway had to think we were so stupid. All the birds were in one spot and we were on the opposite end. But it worked. Some days it took us until 9:30 a.m. to shoot our birds (which is late for teal), but we got’em every time. If you are hunting with just a couple buddies, all it takes is three or four good groups of teal before you’re done. You can easily drop multiple birds from one flock when they fly into the kill hole. The key to hunting this way though is you have to have good numbers of birds. You’re not going to be able to do this with 500 teal. You need 5,000. —J.W.

There’s two things sod farms have an abundance of: water and duck food (seeds, grasses, and invertebrates). I’ve only had the chance to teal hunt them a few times, mostly because they are private ground and the business owner has to trust that you won’t gouge into his profits by rutting up the future lawns of suburbanites. But if you can get on one, they are light’s out shoots. Teal don’t need much water at all, in fact a few inches is ideal, and there’s plenty of puddles in low spots on sod farms. The trick is finding a place to hide. Teal don’t care as much as mallards about hunters with guns, but you can’t just be sitting on a bucket with your shotgun in the wide open. I’ve been lucky to find nearby treelines or overgrown, brushy areas to hide in. You could use an A-Frame blind in the middle of the field too. Spinning-wing decoys are a must, and I have deployed six to eight Canada goose full-body field decoys because they present a larger profile and there are typically local Canadas in the field anyway (which you can shoot too if it’s early goose season). —J.G.

One October morning I was field hunting from a pit with a few buddies. It was shooting light, so we had turned the spinning-wing decoys on. As we poured cups of coffee, five ducks landed on the lid of the blind. We all grabbed our guns as they swung out in front of us. It was still low light so we weren’t sure exactly what kind of ducks they were, only that they were small and couldn’t be mallards or pintails, which was typically all we shot out of this field. We hopped out and saw that they were all green-wing teal. At first it seemed odd, but our pit was so close to a large watershed we figured the teal must have been roosting on it, caught the motion of our spinners when they took flight, and landed.

In the years to follow, we hunted that pit a bunch during early goose season, and about 50 percent of the time would kill a few blue-wings when the two seasons crossed over. It probably would have been more if we remembered to bring the spinners every morning. If you goose hunt near water where you know teal are around, I highly recommend bringing the spinners—you can turn them off when the honkers fly. Just make sure you are facing the direction the teal will be coming from, if possible. They’re going to be screaming past, and you’re likely only going to get one opportunity to shoot. —J.G.

In high school we had a teal season were nobody was killing birds. I was asking everyone if they had seen any teal, and got the same answer, “no,” from them all. Our scouting was a bust, so I decided to go to a public river I had seen a few teal fly down over the years. It definitely wasn’t a blue-wing hot spot, but they had been there enough, and with no other real options, a buddy and I gave it a shot. We put out the spinners and almost immediately birds were on us. It worked a couple more times after that, and in any year I can’t find blue-wings, I go to the river and typically kill birds.

At times when it doesn’t seem like there are birds around, you just have to take your best shot, and think of places they might be. Because often you’re only going to see blue-wings in the first hour of hunting and then you won’t be able to find them, particularly late in the season when they have been shot up by every hunter in the county. They’re going to find the most solitary places they can. The best locales to target when this happens are natural travel corridors (rivers or creeks). Because they are always going to use water systems. It’s in their blood. —J.W.

6. Get In the Middle

Opening day of teal season often brings out loads of hunters on the public marshes I hunt because it’s often the best (and only) morning to get a good shoot in. High school kids and die-hards camp out all night to get the best spots. God bless them for their dedication, but I’m not sleeping in my truck getting bit by mosquitoes on a muggy September night for a few blue-wings. Nor do I want to share camp with a bunch of teenagers who swiped a bottle of Wild Turkey from dad’s liquor cabinet.

Most hunters will set up in places they have seen teal. It makes sense—you go to where the birds are. I’ll do this too, if I can. But many times the best spots are already taken, even though I’m on the scene three hours before shooting light. So I do my best to get in between the roost and my fellow hunters to intercept the birds. I sometimes feel like a jerk for doing this (and won’t shoot at every flock that comes by so others can get some early shooting in too), but it’s the easiest way to kill teal in a crowded marsh. And it’s better and safer to traffic birds this way than setting up on top of another group, which can happen to you even if you are the first person in the marsh. —J.G.