Duck Hunting from a Kayak, Tips and Tactics

Kayaks offer duck hunters some great advantages and some serious disadvantages. Here’s how to kill ducks from a yak 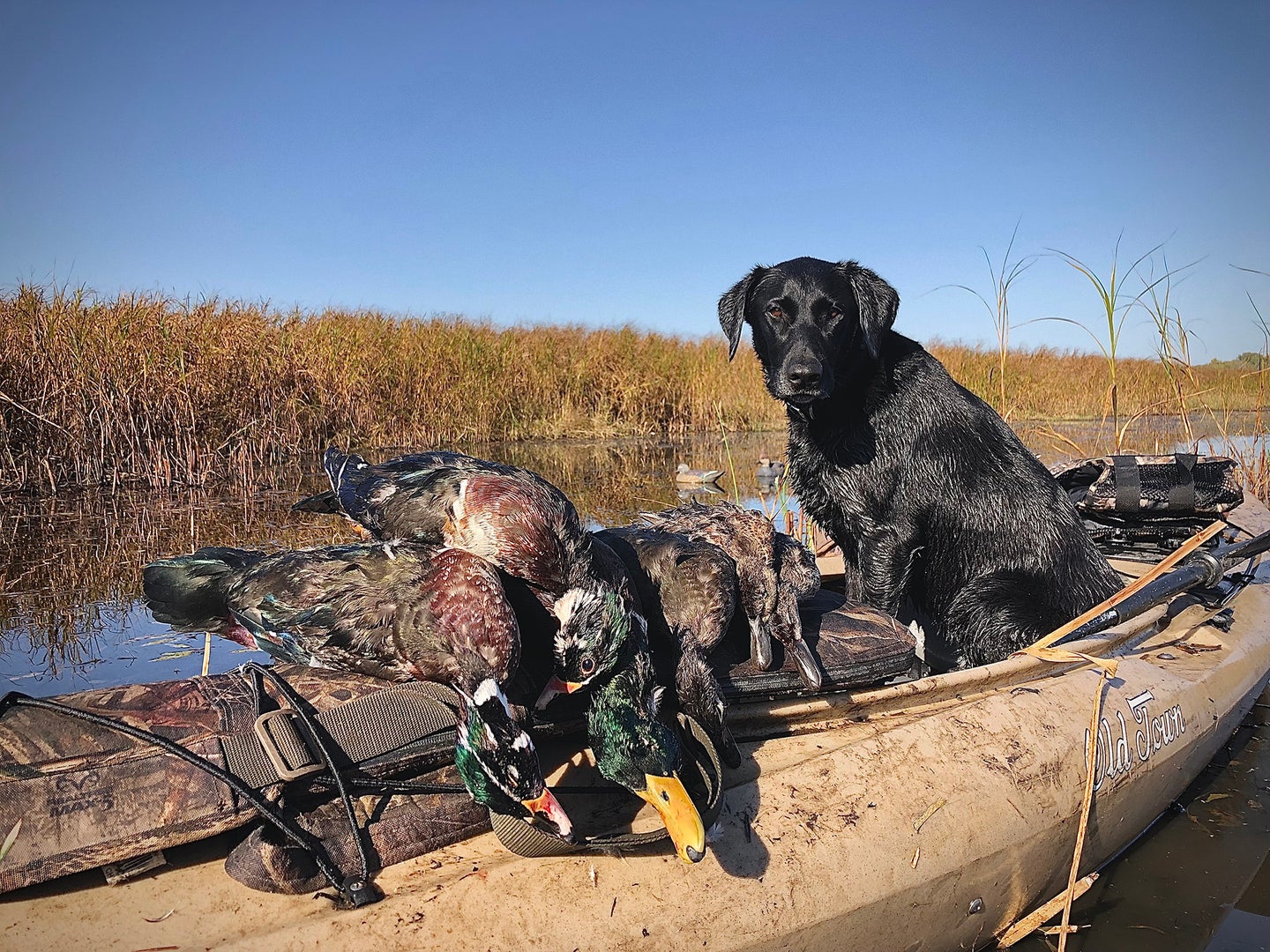 First, I heard the hum of mud motors, then I saw the flood lights burning through the marsh. I had paddled my duck hunting kayak into a backwater spot by moonlight and then spent the last 20 minutes dragging the yak, and all the gear in it, through shin-deep muck to get to my spot.

Days ago, I had seen flocks of wood ducks, teal, and mallards dive bombing into a little pool of water that was well off the main channel of the river. I vowed to come back with my kayak and hunt it, figuring that no one else would be crazy enough to slog in there. But as I watched two boats motor in my direction, I worried I might have underestimated my duck hunting brethren. I flashed my spotlight in their direction, to let them know “I’m already back here, suckers.”

But I needn’t have worried. They stopped well short of my spot and set up on the main channel, avoiding the long slog. And this is the real advantage of duck hunting from a kayak: It allows you to get to places that other hunters won’t go. This is incredibly important in the era of surface-drive mud motors, where seemingly everybody and their brother has a shallow-running boat and isn’t afraid to rev that son of a gun into the very back of the marsh.

If you’re an experienced duck hunter looking for an advantage over the competition, or if you’re a new duck hunter just looking to get in the game, a kayak is a great option. But duck hunting kayaks also have some serious limitations. Here’s what you need to know.

Real Talk on Duck Hunting from a Kayak

Kayaks have a few big-time advantages for duck hunters:

The first three points are the most important. If you’re determined, a kayak will take you into spots that even mud boats can’t reach. You’ll usually have to drag the kayak a few hundred yards to hit these spots, but the hunting will be worth the effort. One thing about hunters who use mud boats is that they are typically hesitant to leave the boat. Afterall, they’ve put good money into it, it’s loaded up with a big spread of decoys, and it’s got that killer blind to hunt out of—why slog through the marsh?

Because kayaks require us to go light in the first place, slogging through the marsh becomes less of a chore. Plus, you can slip into these skinny waters quietly, without blowing out all the ducks on your way in.

But duck hunting kayaks have some serious drawbacks as well. Those include:

I’ll stop short of saying that a kayak is the ultimate duck boat, because it has so many limitations. Mainly, it’s not a big-water vessel. Sure, you might take a kayak out on a big lake in the summertime, but doing the same thing on a cold, windy, and wavy day in November, while you’re loaded down with gear, is simply unwise.

If you’re a kayak hunter, leave the big water to the guys with big boats. Even if you can paddle bigger waters safely, you’ll get beat by guys running souped-up duck boats. Instead, focus on small waters and search out those little honey holes that other duck hunters overlook. This will often mean spots that don’t have boat ramps.

I hunt out of a simple 10-foot, Old Town Dirigo sit-in kayak. It’s not fancy at all, and that’s what I like about it. I can throw it in the back of my truck, drag in through muck, bounce it off rocks and logs, and not worry.

There are a variety of bigger, more stable kayaks out there that will seem attractive to duck hunters. These bigger boats can haul more decoys and are more capable on bigger water. But even the most sturdy, overbuilt kayak can’t compete with a flat-bottom duck boat powered by a mud motor. So instead of beefing up your kayak, go the opposite direction and take the minimalist approach. A lighter, smaller, sleeker rig will help you get way back in there. You’re simply not going to want to drag a 13-foot boat that weighs a couple hundred pounds through muck at 5 a.m. But that’s what I’ll be doing with my little boat that weighs 45 pounds.

Under this philosophy, here are some good duck hunting kayak options listed from lightest to heaviest (all weigh less than 76 pounds):

As for camouflage and blinds, I try to never actually hunt from the kayak (more on this below). So, a boat blind is not critical, though there are all kinds of DIY blind projects on the internet. If the kayak you like has a red or yellow paint job, simply spray paint it tan and you’re off to the races.

The downside of these lightweight kayaks is that they have minimal weight capacity. You’ll be working with maybe 30 to 60 pounds of available gear weight depending on your own weight. That means you’re going to have to slim down your gear selection. I typically run about a dozen of the best duck decoys, skip the spinning wing, and then pack just a blind bag with calls, a box of shells, some snacks, a headlamp, and my shotgun (in a floating case).

If you want to run a bigger decoy spread, going with lightweight dekes like those from HeyDay is a good idea. But even with ultralight decoys, you’re only going to be able to pack so many in the boat (I recommend using a floating decoy bag like the Rig’em Right Refuge Runner). But that’s fine. The whole point is that you’re hunting where the ducks want to be, so you won’t need a big spread to draw them in. You just want to hide well and use a dozen or so decoys to bring the birds into gun range.

Shooting from a Duck Hunting Kayak

Yes, it’s possible to hunt from a kayak and shoot right out of the boat, however I do not recommend this. The small, lightweight kayaks I recommend are not stable enough to have a good shooting experience. If you go with a big, wide kayak for stability, you’re not going to be able to get to the furthest backwaters, which means you’ll end up hunting all the same spots as the mud motor crowd.

Plus, no matter what type of kayak you’re trying to shoot out of, you’ll have limited range of motion because you can’t turn your body or reposition your feet, all you can do is pivot at the waist. This means that any bird past 2 o’clock for a right-handed shooter is going to be an extremely tough shot.

Always try to hunt in spots where you can get out of the kayak and hide in cattails or other shoreline cover. You’ll shoot better, and you’ll be able to hide better, too.

If you must hunt in the boat because the water or the muck is too deep to get out, then do whatever you can to stabilize your kayak. Slide yourself into the weeds or onto a little piece of floating bog. I’ve driven large garden stakes into the marsh on both side of the boat and then used straps to stabilize the boat. This worked ok, but was still not an ideal shooting platform.

Safety should be your number one priority when it comes to duck hunting kayaks. Always wear a life jacket. Don’t launch your kayak into big, wavy waters or raging rivers.

Kayaks are relatively easy to flip. Tipping a kayak while out fishing in the summer is a momentary disaster that you’ll laugh about later. But dumping a kayak while deep in the marsh on a frigid fall day could be fatal. When it doubt, don’t risk it.

Where to Put the Dog When Hunting from a Kayak?

I have a small female Labrador retriever who lays on the front deck of the kayak (small retrievers are better for kayak hunters). She doesn’t fuss or rock the boat. She just lays there until we get to our spot and it’s time to go to work.

The key is that I’ve been putting her in kayaks since she was a puppy. She’s used to it. The morning of opening day is not the right time to introduce your duck dog to a kayak.

You can also have your dog ride in the back of the kayak. Screwing down a little rubber floor mat material where your dog will ride helps prevent them from slipping on the wet polyethylene.

Just because you can get back to where the ducks are, doesn’t mean that you always should. If you see that large groups of ducks (think thousands) are roosting far back in a marsh, don’t paddle in and bust them off the roost. Doing so might blow up hunting in the entire area. Instead hunt close to the roost but not in it. You’ll get more days of better shooting and keep those ducks in your area.

On the flipside, when you see more huntable numbers (think hundreds) of ducks working an area that no one else can get to, launch your kayak early and get ready for your best hunt of the season. That’s just what I did on that duck hunt after I made my slog back to the “X”.

As the sun came up, ducks started circling my little pool of water. I dropped a teal in the decoys and then a couple wood duck drakes. I worked a pair of mallards down over my decoys and killed the greenhead. The mud motor hunters got some shooting too, but nothing compared to the morning I was having. By 10:30 I had killed my limit of six ducks and was happily paddling back home for breakfast while the other crew was waiting for more ducks over their giant spread of decoys.