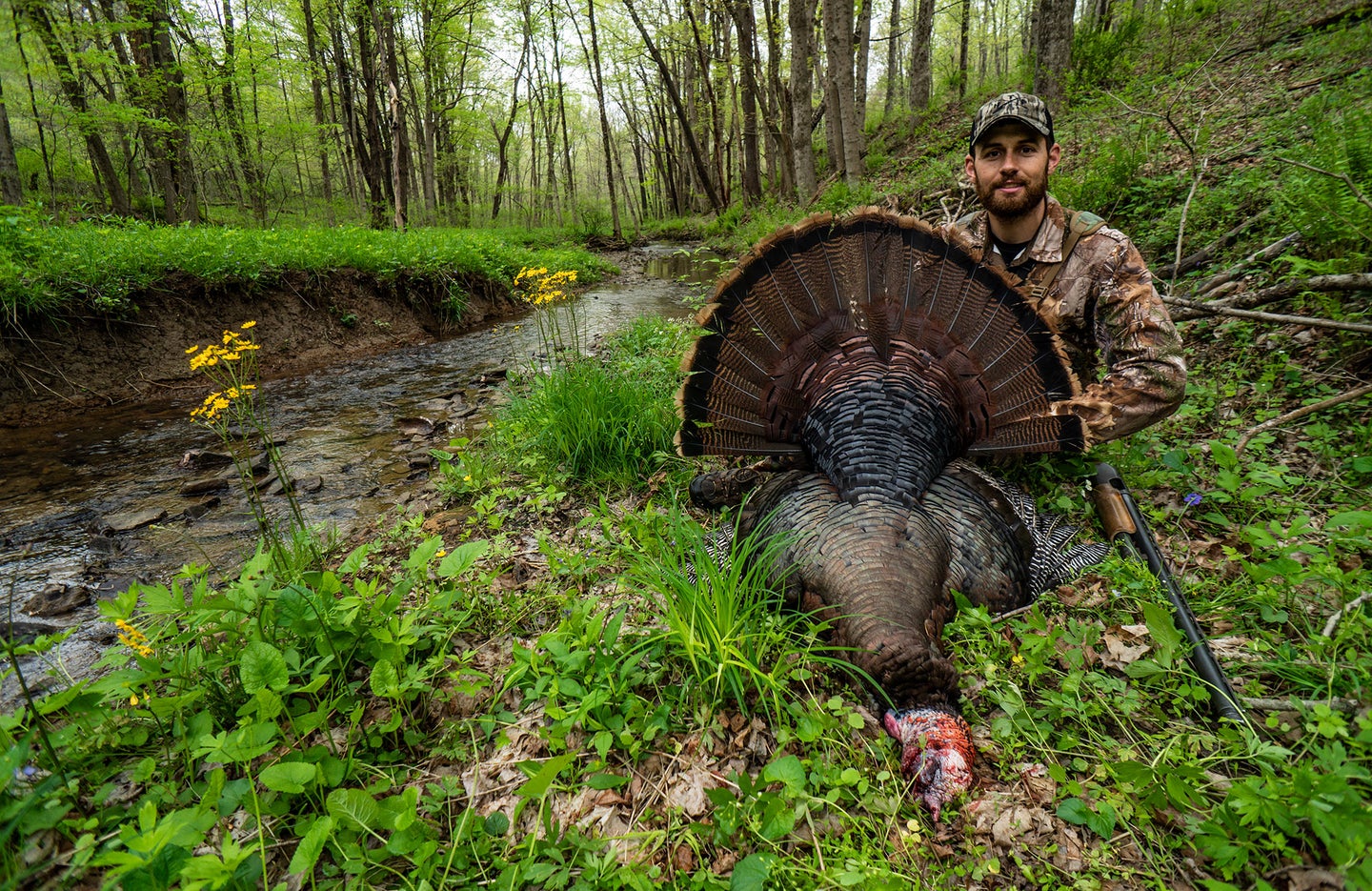 The Hunting Public’s annual turkey tour YouTube series is on again and it’s taking them all over the country. Along the way, they’ll see dozens of birds in a variety of scenarios. But this isn’t new to Aaron Warbritton, a founding member of THP.

Warbritton has been chasing gobblers all his life in his home state of Missouri. He’s logged a lot of time on a turkey call and has coaxed all kinds of toms into shotgun range. So, we decided to pick his brain about a few common turkey hunting scenarios that you might find yourself in this season.

Most of these tips are geared toward intermediate turkey hunters, but if you’re a beginner, you’ll find a few takeaways to bring into the woods, too. Grab your favorite calls and check out Warbritton’s fixes for these common turkey hunting problems.

How to Bring in a Henned-Up Tom

“More so than anything with henned-up turkeys, you need patience because they’ll fly down and they’ll shut up,” Warbritton says. “When they’re real henned-up early in the season, sometimes they won’t gobble all day. But the one common thing I’ve seen is when they get real henned-up like that, they don’t travel very far. They stay in the same general area all day. A lot of people used to say if you get aggressive, sometimes you can piss off the boss hen and bring her in,” he says. “I’ve definitely seen this happen, but it’s rare.”

Instead Warbritton advises softening your calls. It’s still a good idea to call directly to the hens and answer their calls, but he recommends mimicking them with quiet yelps, and to pay attention to where they move so you can stay in the flock’s “bubble.”

Hens can drag a gobbler away after they don’t like what they’re hearing. Usually this starts with an answer from one of the hens, a loud 5-, 6-, or 7 -note sequence. She calls out to assemble the flock and then, shortly after, every yelp you hear is farther and farther away. Warbritton says that this is what happens when you offend a hen. And the biggest way to do that is by calling too aggressively.

“I’ve had better luck calling a henned-up turkey using real soft, content stuff—then scratching in the leaves and trying to get as close as possible. You’ve got to be right there in their grill to make something happen.”

To do this, you may have to move into position rather than sit and wait for them to come to you. Keep tabs on the birds and the sign in the area to try to get in front of them. As you approach a whole flock of turkeys, remember that there are many eyes on you, so it’s important to move quietly and listen carefully for hen chatter like soft yelps, drumming, and scratching. But, if you’ve done your homework by scouting the area, you can get into a position that they might feed to naturally.

How to Call to a Roosted Tom

Every day in the turkey woods is different, but many of them start the same way. You set up in the dark, the sky lightens, and you hear a tom sound off on a limb. The big question is, when do you start calling?

If you’re in close to the bird, Warbritton says that it’s a good time to not do anything. “I just let him do his thing for a while because oftentimes they’ll sit up there and gobble for 20, 30 minutes before flying down.” Right before they do come down, he recommends giving some soft subtle tree yelps just to let the tom know you’re in the area. With every sequence, raise the volume and try to mimic a hen that’s just waking up.

But sometimes, you’ll want to stay quiet until the bird is on the ground, especially when you set up close to the roost. The biggest advantage a lone gobbler has in a tree is sight. Turkeys have a natural inclination to get to high vantage points to see and project sound. If you can see him and he can see you, it’s better to just shut up. “I may not call to him at all [if I’m close enough for him to see me] because I don’t want him to look down there and not see a hen and fly the other direction.”

This is when Warbritton recommends hitting him with something more aggressive. Ideally, after that, the tom will gobble back and make his way in, looking for a hen.

Lastly, if you’re relying on a mapping app to plan your attack and roost a gobbler the night before, be precise when dropping a pin. Go in with little to no light and tiptoe for the last 100 yards or so. When possible, it’s ideal to get very close to a roosted tom, but if the woods are too loud with crunching leaves or it’s too light because of a full moon, it’s better to back off and avoid spooking the birds.

Read Next: 3 Ways to Become a Deadlier Turkey Call

How to Call to a Quiet Tom

For a tom that’s gone silent, Warbritton likes to use a sequence of calling to bring him in. Each sequence lasts about a minute or two. It starts off with soft calls before increasing in volume and inflection toward the end. He sets up for an hour or two and runs through the sequence every 20 to 30 min.

“I’ll start out with real soft stuff, or something like a plain yelp,” he says. “Then, I’ll pause, for 10, 15, 20 seconds, and listen for a response, because that’s what a hen is doing when she’s walking through the woods, calling other turkeys. Then, I’ll pick up the intensity a little bit with the second series of the sequence, and I’ll call a little bit louder on that second one.”

You do this in case a silent tom has slipped in behind you. If you start your sequence off too loudly, you’ll probably scare him off. If you don’t get a response, get louder. Then scratch the leaves every few minutes to add some realism.

“That’s exactly what a wild turkey does when they’re calling and looking for other birds. They’ll start off pretty soft, and then when they don’t hear anything, they’ll get louder.”

Warbritton says that the tom will then either slide in quietly, and you’ll get him with one of the softer calls, or he’ll fire off in the distance and you’ll be able to maneuver around him to make a play.

“I should say that to sound more believable, you need to change locations every little bit—every 30 minutes to an hour or two. If you’re calling a silent tom that’s out of sight but within earshot of you, and you’re calling to him and a bunch of hens every 10 minutes from the same spot for two or three hours, that’s not going to sound natural.”

“Oftentimes, we’ll sit down, we’ll call, we’ll go through that sequence like I said, quiet to louder as it goes. We’ll sit there for 15, 20 minutes, and then before we get up and leave, we’ll try that sequence again, and see if we get a response. If we don’t, then we’ll move.”

Keep this movement within reason though. Remember, you’re trying to mimic a turkey and they’re not going to cover a lot of ground in a hurry if they’re just feeding. Also, if you’re hunting a silent tom, there’s a good chance he’s with hens, and won’t be moving a lot. But changing your calling position after a tom goes silent—even if it’s only by 20 or 30 yards—might make your calls sound realistic enough for him to come closer.

When to Use the Fighting Purr

So you’ve tried coaxing them in. You’ve picked up the intensity, more and more. And you have a tom that gobbles back—but he still doesn’t want to commit. Now is a good time to use the fighting purr.

When Warbritton is making a fighting purr call on a slate call, he positions his fingers farther back on the striker and then drags it across the slate. He breaks this call up so it doesn’t sound too repetitive because when turkeys are excited enough to fight, they don’t make the same sound over and over again. “Purr long, purr short, and kind of work them together.”

On a mouth call, instead of rolling air with his lips to make a purr, he rolls the air in the back of his throat. He suggests using the same cadence of irregular purrs as he does with the slate call to make it sound believable. “It’s the same principal,” he says. “You’re purring real short and then louder and longer, and that just creates the realism of an actual turkey fight.” When using either kind of call, he likes to hit the ground or flap a turkey wing to make it sound even more authentic.

Warbritton typically uses the fighting purr as a last resort, when he has a hung-up tom gobbling out of range. But it can be used other times, too. Turkeys are curious about other turkeys fighting and that can work to your advantage. The key is to keep it realistic.

“I don’t want people to think trying all this different stuff isn’t a good idea. Any time is good to use [the fighting purr], just as long as you’re not going overboard with it. Turkeys will fight for a few minutes sometimes, and then they’ll shut back up. You don’t want to be doing a fighting purr every five minutes, from the same spot in the woods. That wouldn’t be natural.”