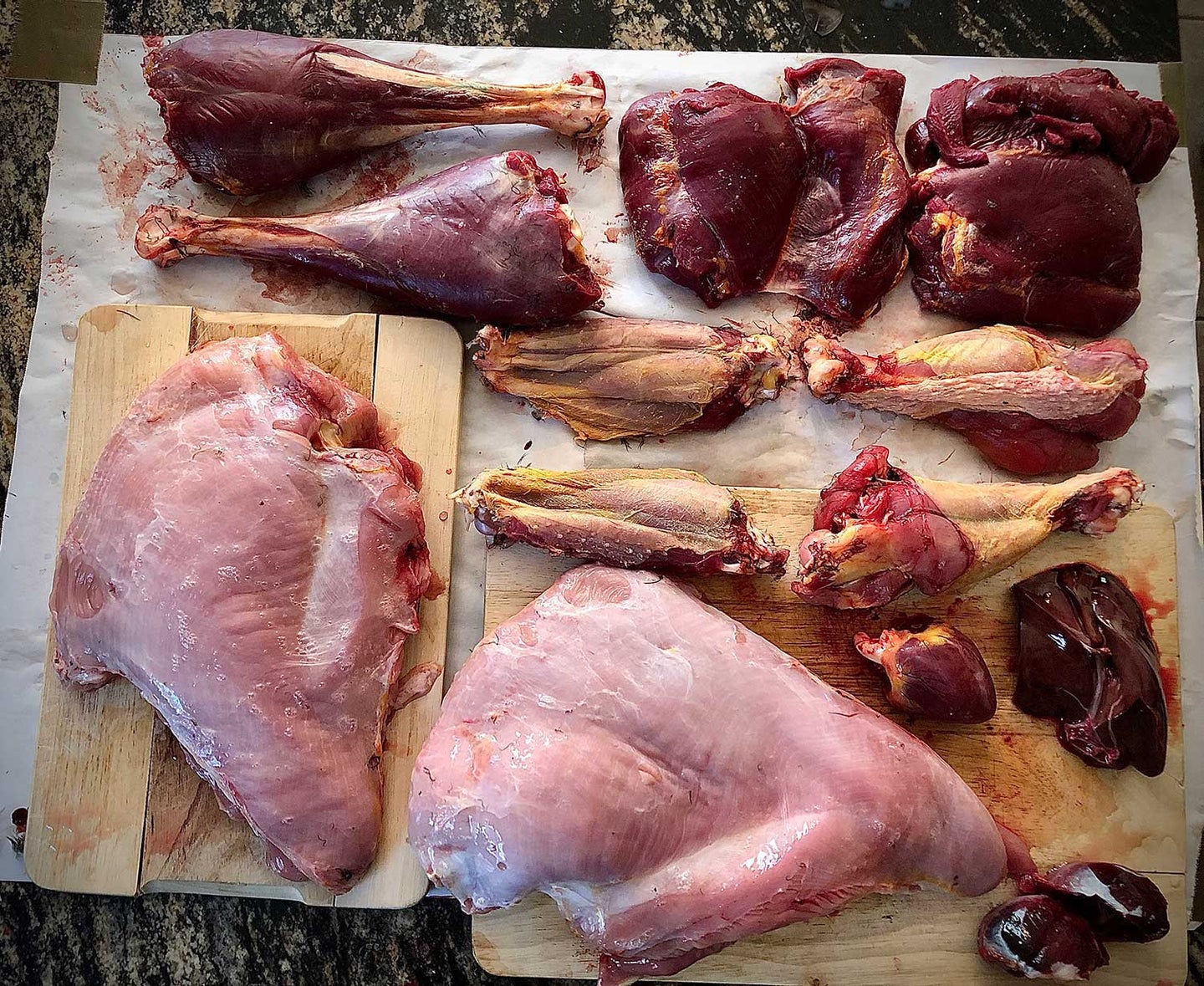 All the cuts from a wild turkey. Alex Robinson
SHARE

Wild turkey is my all-time favorite game meat. It’s easy to cook, it has plenty of rich flavor, and it’s just about impossible to beat fried turkey nuggets dipped in spicy barbecue sauce. Talk to any serious turkey hunter, and they’ll agree. However, not all turkey hunters know how to butcher a wild turkey and get every cut of meat.

In the video below, my turkey hunting buddy Josh Dahlke does a really nice job demonstrating the basic butchering process on a wild turkey. With most of the birds I shoot, I follow the exact same process Josh uses here.

But sometimes, I want more than just the breasts and legs. Some turkeys are killed on hunts that are more meaningful, and I want to savor every bite as a way of making that hunt last just a little longer. Here are the main cuts you can harvest when you butcher a wild turkey:

The breasts and legs (drumsticks and thighs) are the most popular cuts and you can see how to remove them in the video above. Wild turkey wings are often overlooked, mostly because they are a hassle to pluck and clean. But if you go through the trouble of harvesting turkey wings, you’ll be rewarded with surprisingly meaty cuts that can be served up in a killer buffalo wing recipe. The giblets consist of the gizzard, heart, and liver. Heart and gizzard meat are pretty similar (rich and a little chewy, in a good way) when fried and dunked in hot sauce. The liver, of course, has more of an iron taste.

Everyone takes the breast meat from their turkeys. But not everybody gets all the breast meat they should. The key to leaving no meat on the bone is to use an ultra-sharp, flexible blade. You don’t want to use your thick deer hunting knife for this job. The breastbone has curves and angles that you need to work the blade around. It’s more like filleting a fish than quartering a deer. Also, the breast meat on a turkey goes up much higher on what I’d call the shoulder of the bird. Make sure you peel back the skin all the way up to the wing to ensure you don’t miss any of that golden meat. After you’ve pulled each breast from your bird, it’s time to think about how o freeze each hunk of meat. On a big tom, I like to cut each breast in half so that I’ve got four dinners worth of turkey breast meat. The top of the breast is thicker and has an almost roast-like consistency. I’ll slice the breast in half so that I’ve got one thick, condensed cut and then a wider, thinner cut.

The Drumsticks and Thighs

The leg meat on wild turkeys can be juicy, tender, and delicious, as long as you treat it right. Here’s a more detailed take on how to butcher and cook turkey legs, but the actual act of pulling them off your bird is pretty simple. Skin down to the knee joint and peel away the skin from both sides of the leg. Then press the leg away from the body until you pop the hip joint. Then cut from the inside of the leg, separating it from the body. You should never have to saw or break bones while butchering your bird. Simply cut through the joints. Press your blade through the middle of the knee joint (this is where a stouter hunting-style blade comes in handy) to remove the foot from the leg and you’re good to go.

I’ll be honest: the wings take a good amount of work. After you’ve removed the breast meat, pop the wing joint by pushing it away from the body (similar to how you did with the thigh) and cut the wing off the body. Now, you can separate the two parts of the wing. Imagine the two types of the chicken wings you get at a bar—the drumette (which is shaped like a drumstick) and the flat or wingette (two little bones and meat in the middle). Separate these two sections by popping the joint and cutting through it and then get to plucking and skinning. Pluck off the small feathers and use your knife to cut away the big primary feathers. What you’ll end up with what looks like over-sized chicken wings, but unfortunately you can’t cook them like oversized chicken wings. Wild turkey wings are tough. I once tried to sous vide the wings for six hours and then fry them … and even then they were too tough to enjoy (though the flavor was great). My turkey hunting buddy Josh Dahlke has perfected a wild turkey buffalo wing recipe that’s definitely worth trying. There’s a surprising amount of meat on the wings, and they’re worth working on if you’ve got the time and determination.

Read Next: A Recipe for Wild Turkey Dumpling Soup

Now for the organs. I do this part last so I don’t get any guts on the other cuts of meat. Carefully slice into the bottom of the body cavity (below the breast bone) and then reach up and grab the gizzard, heart, and liver. The gizzard is a big, firm ball that’s full of pebbles or gravel (known as grit) and helps the turkey digest its food. This organ takes a little bit of prep work before its ready for the fryer. First, carefully slice open the gizzard and remove all the grit and the thick layer holding them. If you’ve seen the Netflix series Stranger Things, this layer kind of looks like the Demogorgan’s head. If you have no idea what the hell I’m talking about, it’s that super-tough liner inside the gizzard itself. Rinse the meat thoroughly and then peel away the gray inside tissue and the outside silver skin (using a sharp fillet knife). When I do this, I end up with two hunks of firm read meat. I’ll slice these into thinner chunks and also slice up the heart and liver and soak it all in milk overnight. Then I mix them in flour, cornmeal, seasoning, and fry them until they’re crispy. Serve with hot sauce. The heart and gizzard meat is very mild, with the gizzard having a little bit more chew to it, but in a good way. Both are delicious. The liver, well, it tastes like liver. Here’s a more in-depth look at how to remove and cook wild turkey giblets.

Trendy health and culinary people are all excited about bone broth these days. Well, bone broth is essentially the same thing as stock, and you can make it pretty easily with the bones from your wild turkey.

The big-ticket items here are the neck, which you can skin, and the keel bone (or sternum) which will be exposed after you remove the breast meat. You can also take the thigh bones, which are stout on big toms.

Stock is a key ingredient for soups and stews, and it’s pretty cool to use to use homemade stock for a wild turkey stew, all from the same bird. If you decide to cook the bird whole Thanksgiving-style, use the remaining carcass for soup. That truly utilizes every bit of meat including those two little ‘tenderloins’ on its backend.

Your turkey hunt may be over, but this bounty of meat and bones will give you the chance to relive it again and again.

Tips: How to Butcher a Wild Turkey