We tested the top TSS turkey hunting loads at 70 and 90 yards. Here are our results 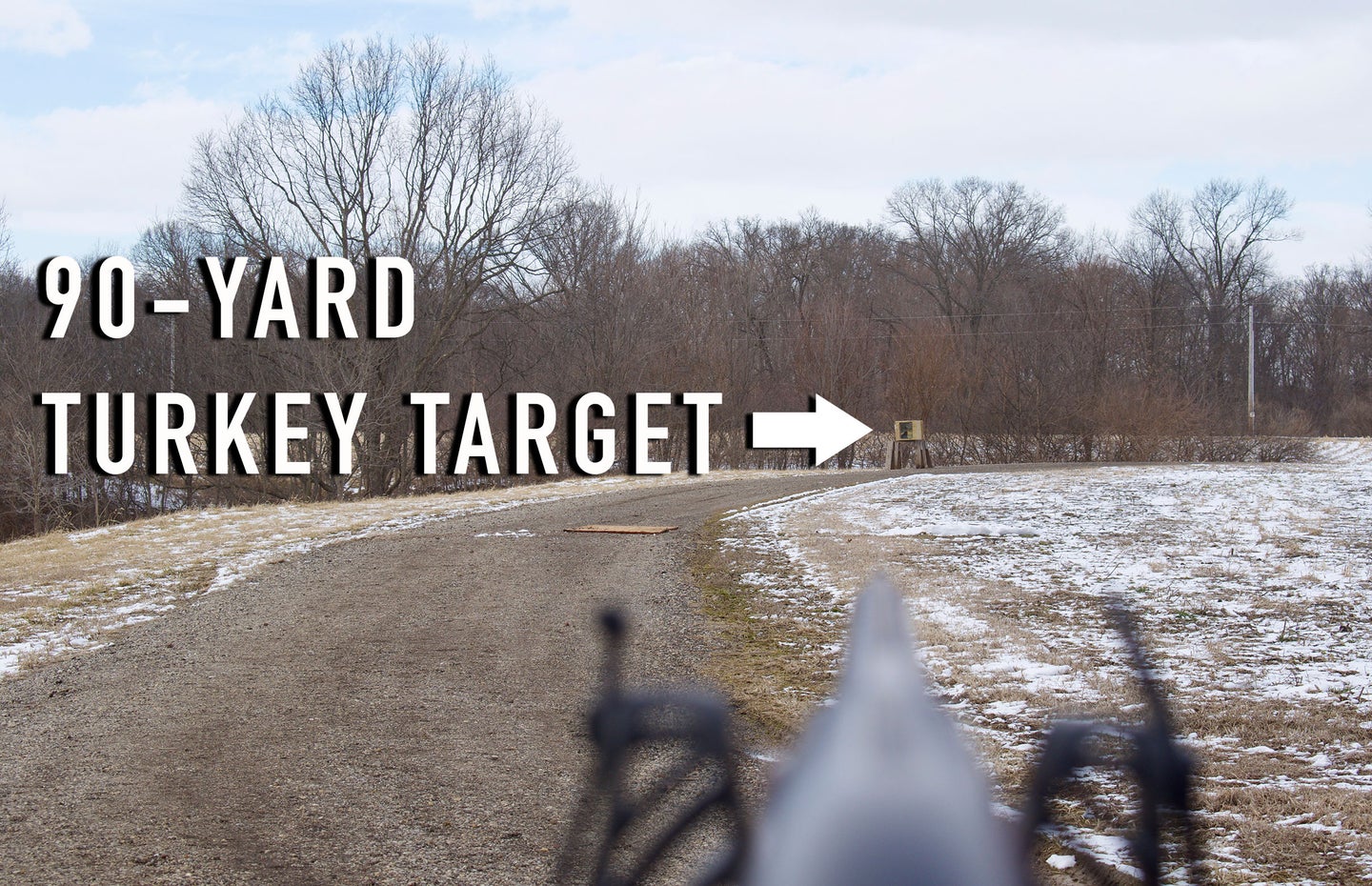 Here is what a 90-yard shot looks like down the barrel of a Remington 870. Joe Genzel
SHARE

Tungsten Super Shot (TSS) has mostly been a good thing for turkey hunting. Its 18 g/cc density hits gobblers harder and patterns better than lead or bismuth, ensuring cleaner kills at reasonable distances. But TSS has also given some hunters a false sense of how far they can kill a longbeard. Not many years ago, 50 yards was considered a long shot on a turkey. Now it seems there are folks boasting online about killing turkeys at 70 yards and beyond.

“Unfortunately, some hunters want to dial their gun and load in to kill a turkey at long range, just to say they did,” says Nick Charney co-owner of Apex Ammunition, which is one of the original companies that popularized TSS for turkey and waterfowl loads. “We’ve kind of taken some of the blame for [shooting turkeys at long range], but that’s not why we started Apex. We build these loads to kill turkeys at ethical distances. I don’t have any interest in killing a turkey beyond 50 yards. That’s not what this sport is about. You also won’t see anything on our boxes about killing birds at long range.”

So, how far is too far to shoot a turkey? During a recent turkey load test that included almost every ammo manufacturer’s TSS offering (and some lead shotshells), I shot nine different loads for pattern and penetration to find out the true range of today’s turkey ammo.

During the first portion of the turkey load test, I shot each of the nine shells from 40 yards at a 10-inch Birchwood-Casey Reactive target—from three different shotguns (Remington 870, Benelli SBE3 Performance Shop Turkey, and Browning BPS)—to measure pattern density. Then, I moved to a penetration test with the 870 (because it patterned the best of the three guns) at the same yardage using a wooden box modeled after a design by former Field & Stream shooting editor Bob Brister. The box holds 27 pieces of 1/8-inch thick cardboard. I also placed a ½-inch thick piece of drywall behind the first cardboard slat to slow the pellets down as they entered the box, otherwise the shot would blow through all the cardboard. Penetration of the drywall was also proof that the load could kill a turkey. Then I recorded the number of cardboard pieces each load pierced, the results of which you can find in the 2022 turkey load test.

For the long-range test, I started by shooting TSS loads from Apex, Boss, Federal, Hevi-Shot, Fiocchi, and Browning, and the best performing lead load, Winchester’s Longbeard XR, at 70 yards. I shot from a sitting position (like you would when you’re turkey hunting), but also off a lead sled. There was hardly any difference in patterns shooting from the ground versus the sled. Since I was running low on cardboard, I decided that if the pellets penetrated the drywall, they would also be able to penetrate the head and neck of a turkey. Each of the TSS loads penetrated the board, but Longbeard did not. Here are the pattern results of each load inside the 10-inch circle from the 870 with a 26-inch barrel and Primos Tight Wad choke at 70 yards:

After shooting these seven loads, I moved the top four (Federal, Hevi-18, Browning, and Fiocchi) on to a 90-yard test using the same shotgun, 10-inch targets, and the Brister box to hold the drywall. None of the loads could penetrate the ½-inch board at this distance. There were some pellets slightly imbedded in the drywall, but not many. Most either never made it to the Brister box or simply bounced off. Here are the results:

What Do the Test Results Prove?

From the pattern and penetration work, it’s clear you can kill a turkey at 70 yards with TSS. But your shotgun, choke, and load combination must be on point. Of the three guns, the 870 was the only one that could perform with reliability out to that distance.

At 90 yards, there are very few pellets in the 10-inch circle and even fewer in the head and neck, which is where you need the shot to be. None of the shotshells could penetrate the drywall either, so even if you connect on a tom at that distance the energy of the payload may not be enough to kill a gobbler. In otherwords, shooting turkeys at 90 yards — regardless of your shotgun, choke, and load combination — is irresponsible.

TSS payloads are more potent than any other bird shot because tungsten is denser than steel, lead, and bismuth. That means more, smaller pellets can be loaded into the hull of a TSS shotshell. For instance, a 2-ounce charge weight of TSS No. 9s has a pellet count around 724. The same 2-ounce load of lead 5s (which has comparable mass to a TSS No. 9) has a pellet count of 340. So, in the minds of many turkey hunters that means they have 402 more chances to hit a turkey if they are shooting TSS as opposed to lead. But that higher percentage of shot doesn’t mean that the decision to shoot a turkey at 70 yards is an ethical one, because a very low percentage of the shot will make it to the target. For example, the 2¼-ounce Apex GT-3 has 814 pellets, 11 made it into the 10-inch circle from 70 yards. That’s a pattern percentage of less than 1 percent.

“At that distance [70 yards] your bead is basically covering up the bird,” Charney says. “I think most guys just put that bead on the bird [and pull the trigger]. I hate it. I think it leads to wounded birds that go off and die somewhere and are never found. TSS is not a long-range load. It’s an efficient killer that’s a better option than lead. I cringe anytime I hear someone say they killed a bird at 90 steps. That’s nothing to be proud of.

“I think there is this perception out there that if you pay $8 for a shotshell, it’s a magic bullet. Like you can’t miss with it. That’s not the case.”

Testing loads at 70 and 90 yards is far different than killing a turkey at those distances. Even though I shot most of the loads from a sitting position, that doesn’t replicate the challenge of shooting in a hunting scenario. If a longbeard hangs up at distance in the timber, you may have to shoot through brush that will affect the number of pellets that impact the bird. Conversely, if you’re hunting a field edge, you could be contending with wind, which could cause your shot to drift at long range. During my test, I was shooting in a 25 mph northwest wind (quartering to) and had to hold the 870 high and to the left on the target to get patterns on paper at 70 and 90 yards.

At 70, I put the bead on the middle of the turkey’s neck, but also a few inches left of the wattles to account for wind (trying to do this on a tom that can move its head at any moment would be a real challenge). At 90, I held near the bird’s eye the best I could — at that distance, the entire target was covered by the front sight. My windage hold was near the left edge of the paper target, which is 12 inches wide. In a real hunting scenario, I would have no reference point for windage, except to estimate that I was holding 6 to 7 inches left of the bird. It took a few rounds of experimenting before I found the proper hold at each range. In that respect, shooting turkey loads out to 70 or 90 yards with a shotgun is similar to zeroing rifle.

To be able to ethically kill a gobbler at 70, you have to practice shooting in all kinds of winds, blowing from different directions and speeds to truly know where the TSS pellets will land. How your gun preforms at 40 yards (the industry patterning standard) and 70 is so vastly different that you can’t just shoot to 40 and call it good. For instance, Boss had one of the tightest patterns at 40 yards, putting 60 pellets in the head and neck of the turkey target. At 70 yards it put three pellets in the head and neck. That’s a serious difference in performance.

Plus, it’s hard for hunters to judge distances beyond 40 yards in a hunting scenario. Is that strutting tom at 60 or more like 75? Without a rangefinder, even experienced turkey hunters have a tough time calling the precise range in the field.

“I called a bird onto public land off private last year in South Carolina, and I was staring down the barrel waiting for him to clear a tree for a solid two minutes,” Charney says. “When he cleared, I put the bead on his wattles and pulled the trigger. When I stepped it out it was 52 yards, but I thought it was more like 40 or 45. As birds get farther away from you, judging that distance is going to be even more difficult.”

Read Next: How to Pattern a Turkey Hunting Gun

Other Considerations for Shooting Turkeys at Long Range

With the right shotgun, choke, and TSS load, it is possible (with a lot of time spent patterning) to kill a turkey at 70 yards. Past that, you’re surpassing the ballistic capabilities of tungsten and relying on luck.

You also must consider if there are other turkeys near the longbeard you are shooting at. The farther you are from the target, the more your shot is going to spread. If other turkeys (hens, jakes, or other toms) are within even a few yards of the bird you’re shooting at in a long range scenario, pellets could strike them, which might cripple or kill those birds. Both are unethical; the latter is illegal in many states where you are only allowed one turkey per day or season.

Lastly, shooting turkeys at long range takes much of the challenge and excitement out of what was originally a close-range hunt. And, plenty of turkey hunters argue that it puts too much emphasis on simply punching tags versus enjoying the hunt itself.

“I think some people feel like they have come all this way, and just refuse to let the bird win,” Charney says. “They’ve spent all this time, energy, and money that if they don’t come back with something that it’s a waste. It’s not. Sometimes the turkey wins. You don’t need a picture of a dead tom, or worse, take a bad shot, to prove your worth as a turkey hunter.”