This Hunter’s Falconry Demands Discipline, Stamina, and a Pack of Bird Dogs

Falconry is one of the oldest forms of hunting, but it has evolved into a modern sport with a thousand ways to play. For Tyler Sladen, that means hunting his goshawk over his setters in New Mexico’s desert wastelands 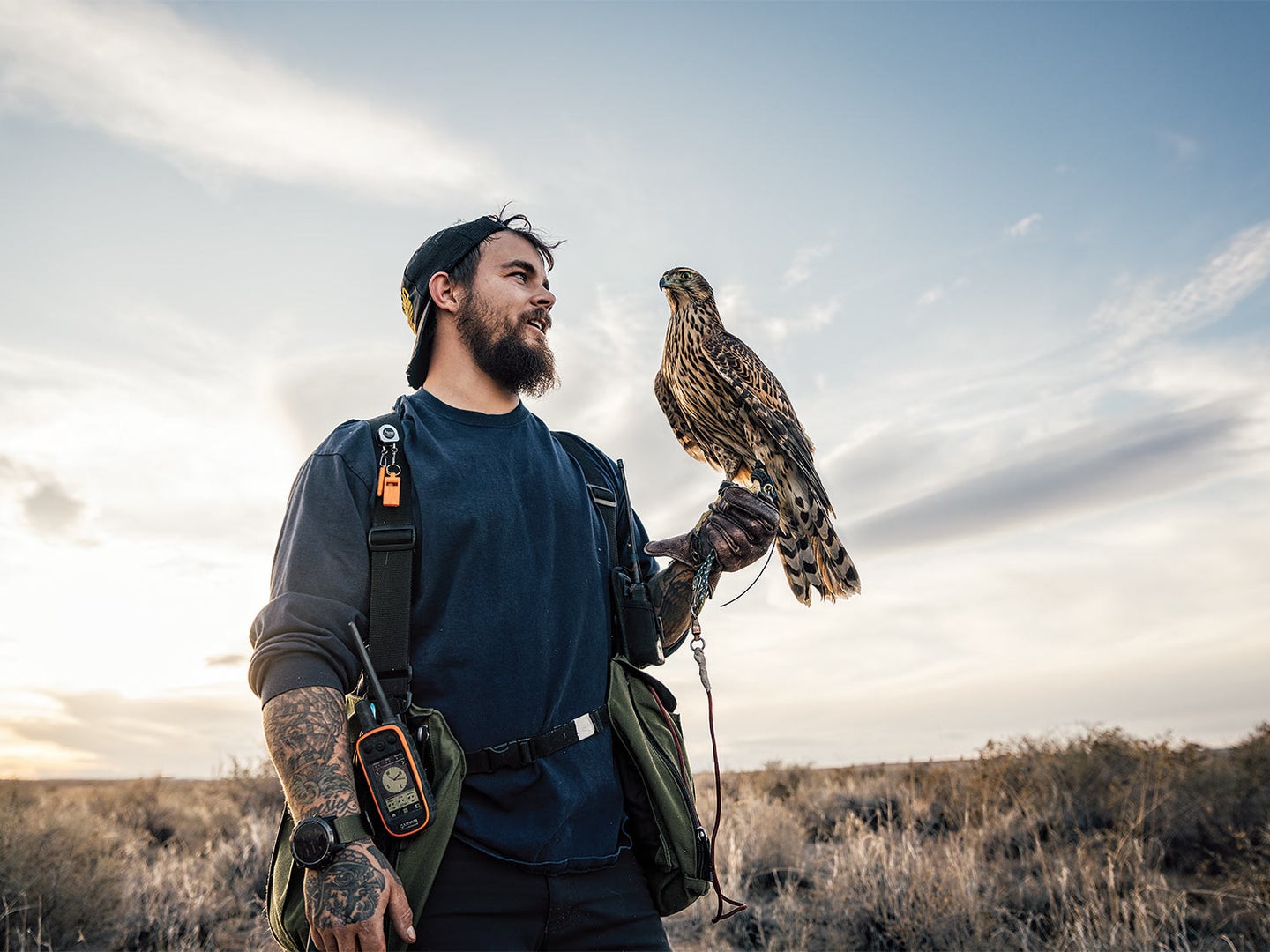 Sladen works hard during New Mexico’s six-month season to get Hashbrown on game and set him up for success. Training is all about building confidence, because confident birds stick with their quarry. Nick Kelley
SHARE

As soon as Hashbrown launches from his arm, Tyler Sladen starts running. I follow, sprinting through the soft New Mexican sand, dodging cholla cactus and piles of trash, and trying not to lose sight of hawk or hunter. I can mostly keep up with Sladen, a 27-year-old Army veteran accustomed to running at high altitude. But Hashbrown is a different beast. In the time it takes the juvenile northern goshawk to soar half a mile across the hills, we’ve barely covered 80 yards. In the distance, Sladen’s buddy Kevin Jackson works their combined pack of setters, still combing the brush for quail.

We’re hunting a chunk of public land on the outskirts of Albuquerque. It’s an off-roading hotspot and a dumping ground for everything from one-eyed dolls to toilet seats. The place holds quail and rabbits, though, and there’s little competition for game since it’s illegal to discharge a firearm here. But that doesn’t mean we don’t hear gunshots nearby.

When we do reach Hashbrown, he’s perched on the highest bush around, a vantage point from which to watch for game while waiting for Sladen to collect him. Beside the sage sits Trigger, a 4-year-old Vizsla and the hawk’s devoted bodyguard. 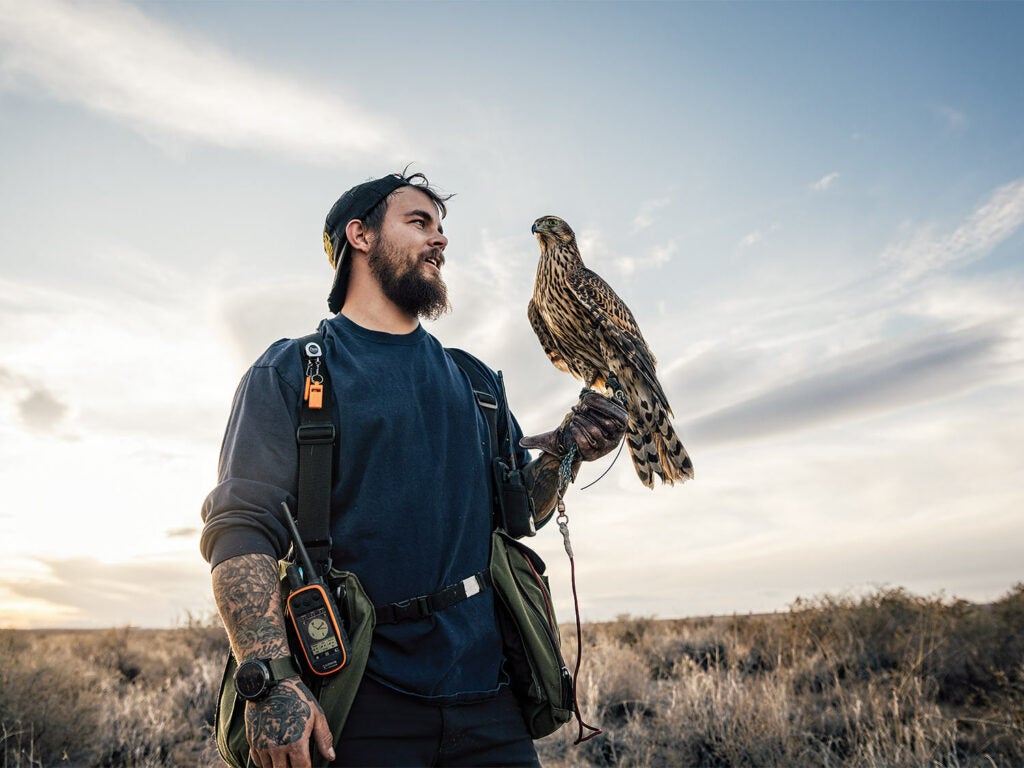 Sladen works hard during New Mexico’s six-month season to get Hashbrown on game and set him up for success. Training is all about building confidence, because confident birds stick with their quarry.

Vizslas were historically bred as Hungarian falconry dogs, and he, at least, can keep up with Hashbrown. When Hashbrown takes off in pursuit of quail, Trigger does the grunt work on the ground, re-flushing birds that try to hide in the brush and standing guard whenever the hawk makes a kill. Birds of prey, especially young ones, are vulnerable to all kinds of hazards, including other people’s dogs, windows, and cars. They’re also in danger from coyotes, sometimes attracted by the distress squeals of the dying rabbits he catches. For now, though, all is calm. Sladen raises a gloved arm, and Hashbrown hops neatly onto the offered wrist.

Read Next: These Hunters Have Perfected the Upland Bird Hunting Road Trip

“Falconry is kind of like a dragon that you’ll continuously chase to make everything perfect,” he says. “Perfect for me is different than perfect for someone else. Honestly, my ideal falconry would be to have all my dogs working ­harmoniously, finding birds, backing and honoring, and pointing a bird. I’d walk in and flush that bird. And Hashbrown would catch it off the initial flush. The amount of times it goes like that? Not often. [But] if I wanted to stack tailgates [with birds], I would just pack a gun.”

The hawk combs a curved beak through his feathers before peering around again, head on a swivel. The desert cottontail he’d flown after escaped down a hole, but there’s plenty more game to be found. Birds miss, just like human hunters, and this is Hashbrown’s first season. It’s a critical training period for the juvenile hawk, and one that demands much of Sladen’s free time. 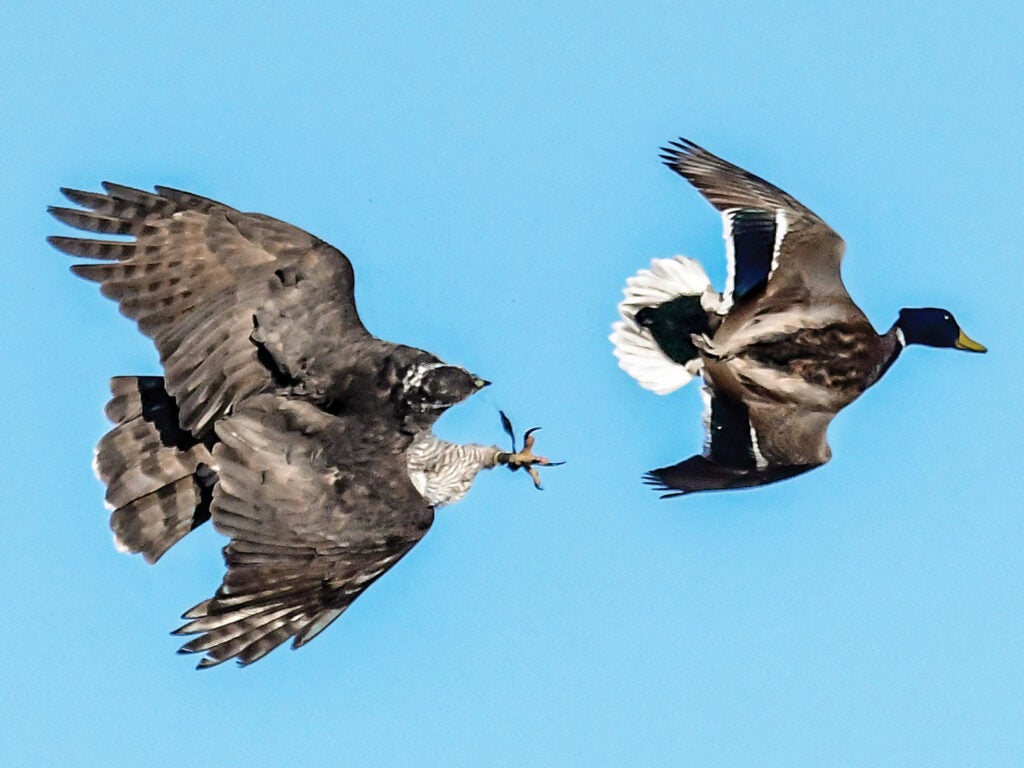 Hot on the Tail

Sladen photographed this mature northern goshawk—what ­Hashbrown will look like once he molts and his adult feathers grow in—as it closed in on a drake mallard during the falconry duck season.

“I’ve been with that bird every single day [since I got him],” Sladen says, whose job in nuisance wildlife control gives him a flexible schedule. “If you want to do falconry at this level, it’s not something you can just wake up and do.”

In early 2019, Sladen drew one of New ­Mexico’s six goshawk tags, which allowed him to legally collect and possess a wild raptor. All of April, May, and most of June, he scouted for a nest in the mountains. After locating a nest of the correct species, Sladen still had to reach it.

Read Next: Finding the Perfect Grouse Gun Is a Lifelong Pursuit

“Climbing the tree can be the easiest thing in the world, or it can be absolutely terrifying if you’ve never done it before,” Sladen says of pulling the chick. “To get attacked by a pair of birds [protecting their young] while you’re dangling 80 feet in a tree, and they’re drawing blood in a way that hurts? It’s not something you can really be prepared for. It’s just something you’ve got to go through.” 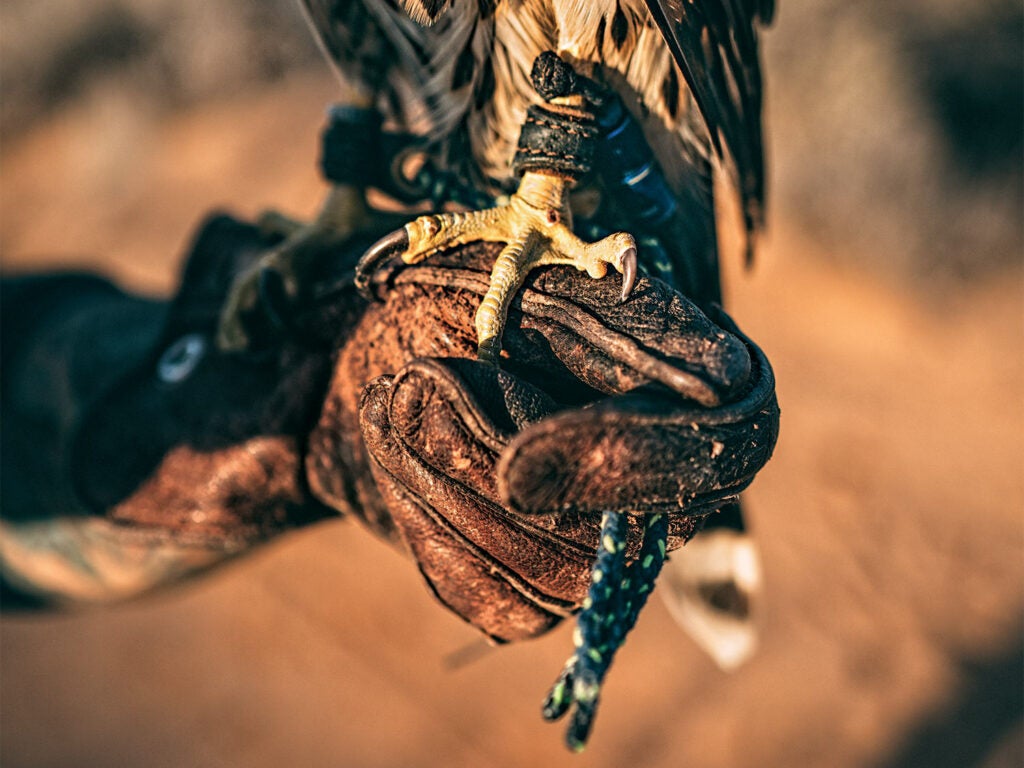 Hashbrown eats a carefully controlled diet and gets weighed before each hunt. For scaled quail, his ideal weight is 660–670 grams, or barely 1.5 pounds. Too heavy and he won’t be interested in prey; too light and he won’t have the energy to pursue quail at longer distances. To prevent him from chasing 9-pound jackrabbits or game that’s not in season, Sladen restricts the hawk’s flight using the tethers tied to his legs.

This is a rite of passage, and a major time commitment, which many falconers don’t even attempt, choosing instead to buy birds from breeders or capture adults and release them at the end of the season. In 2019, Sladen and his buddy were the only two New Mexico hunters who filled their tags.

When he brought the goshawk chick home, though, that’s when the work really started. 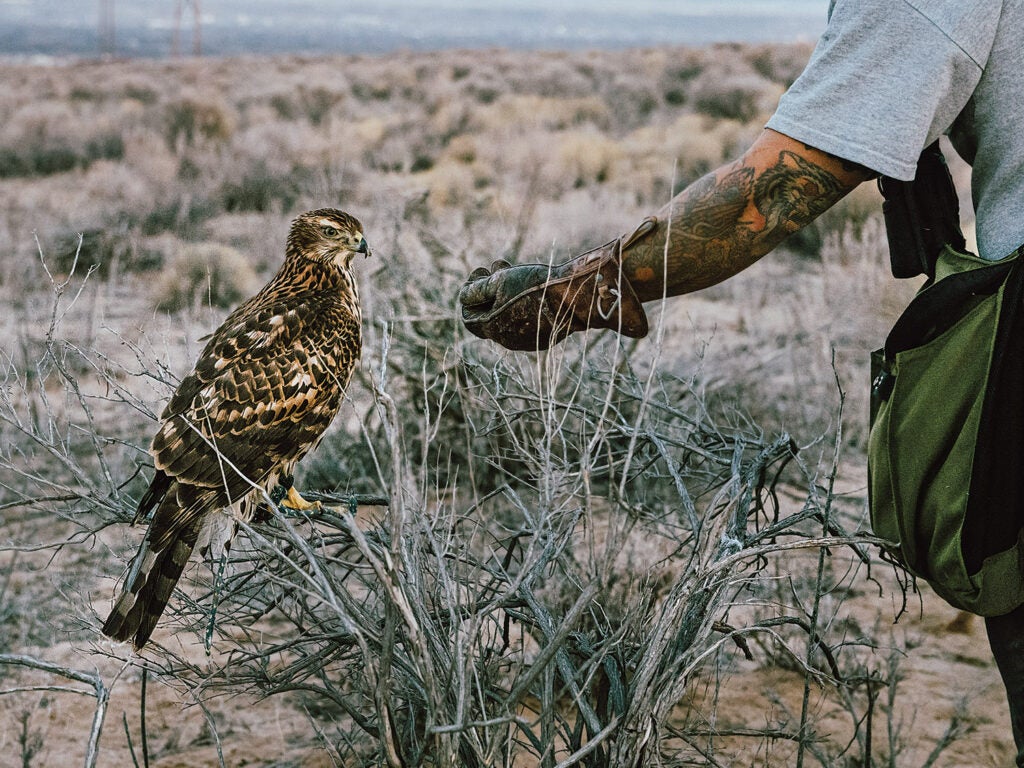 “People say, ‘Hunting must be so much work for the hawk,’” Sladen says, lowering a gloved arm to Hashbrown. “And I’m like, ‘The hawk? The dogs do all the work, and he gets valet service.’” 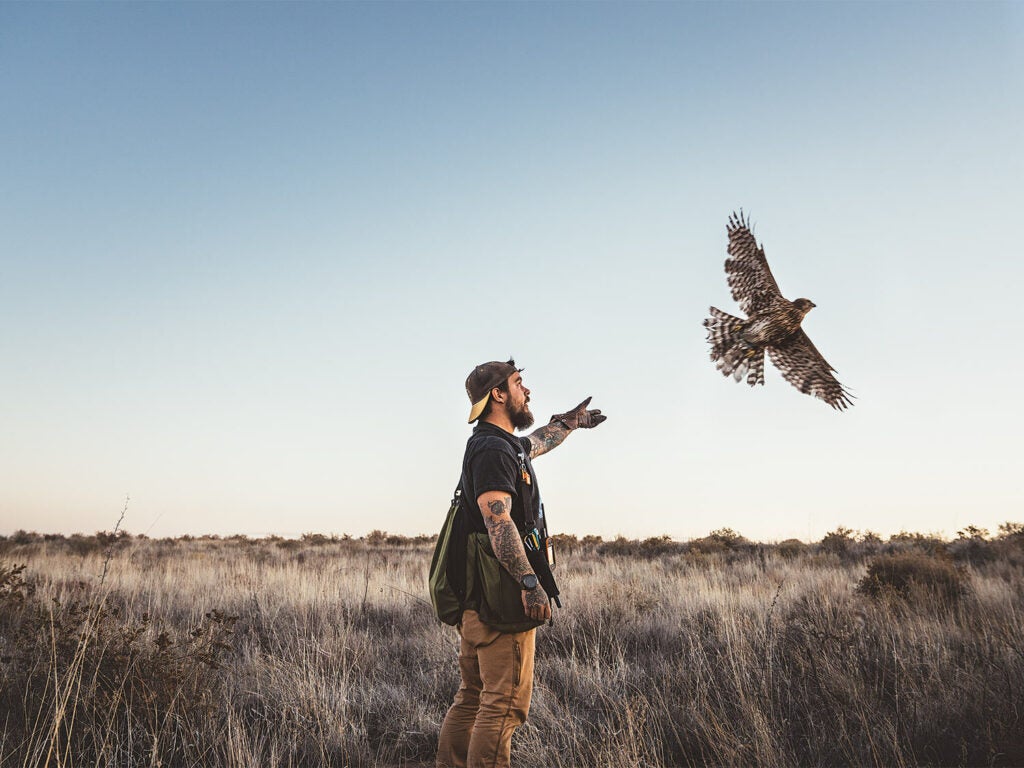 “The goal of falconry is to enjoy the flight,” says Sladen. It’s also a chance to watch a predator pursue its natural quarry. “It’s something they interact with every day. But now you’re a part of that.” 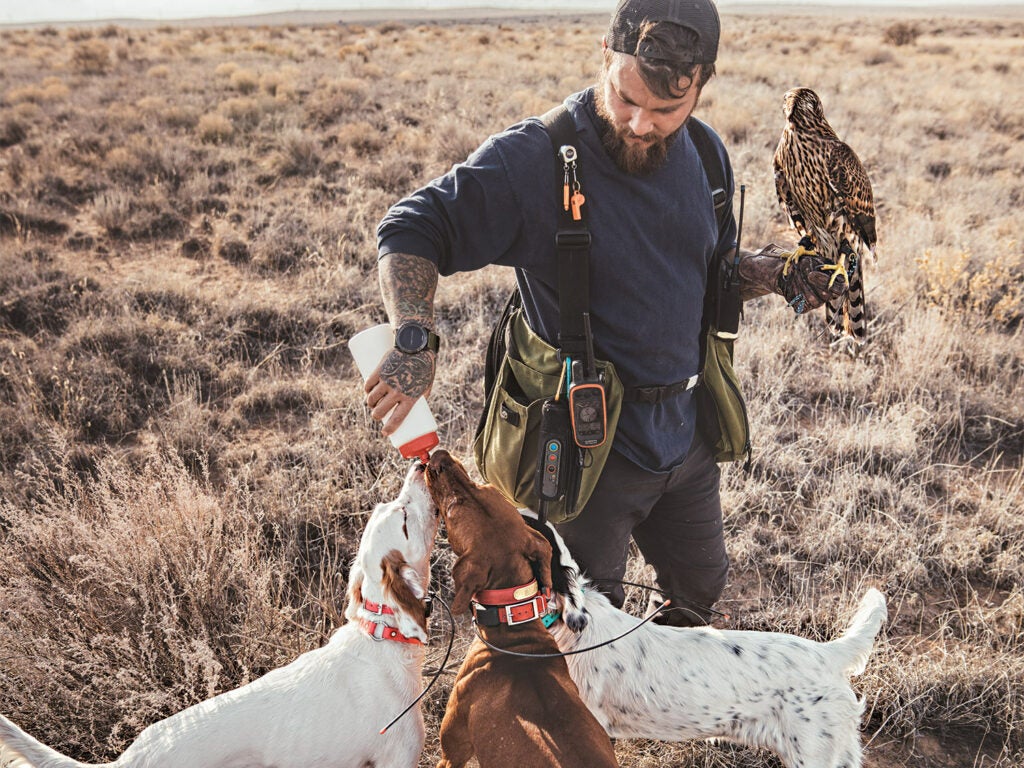 Sladen hunts up to 180 days a year, and for that he needs a rotating cast of fresh dogs (mostly setters). To socialize Hashbrown, Sladen introduced him to dozens of dogs before he could even fly. From left: Qi’ra, Trigger, and Gamora. 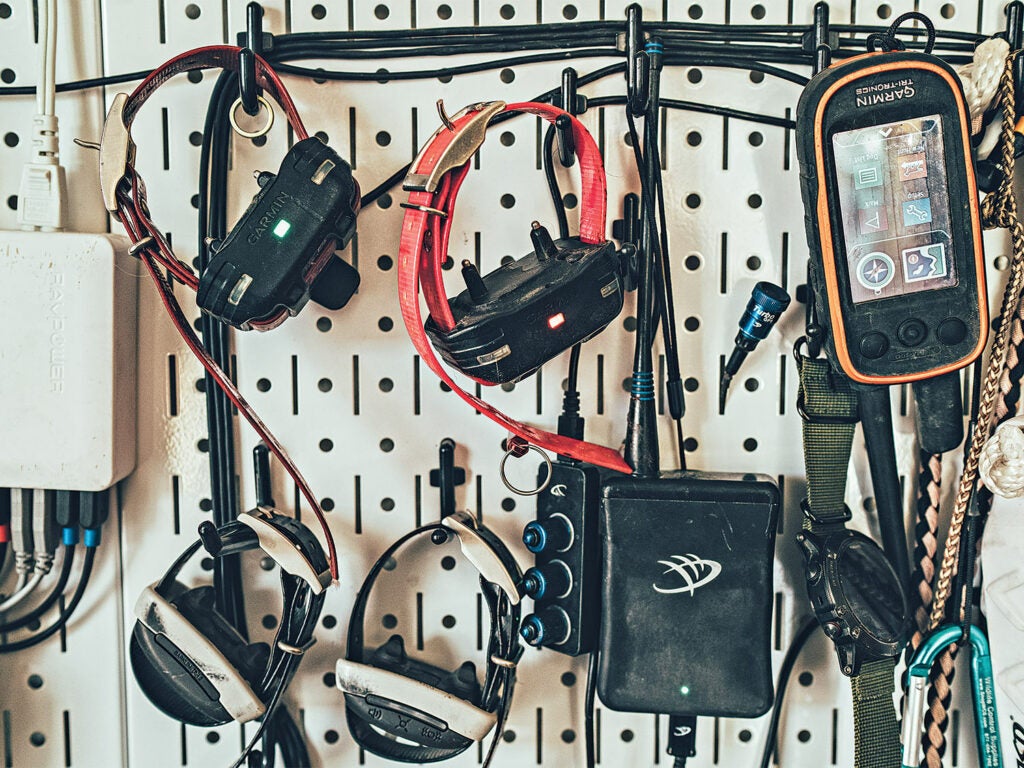 In addition to an arsenal of e-collars for his dozen dogs, Sladen keeps a handful of charged GPS trackers at the ready for his birds. He never flies Hashbrown without one fastened around the hawk’s leg. 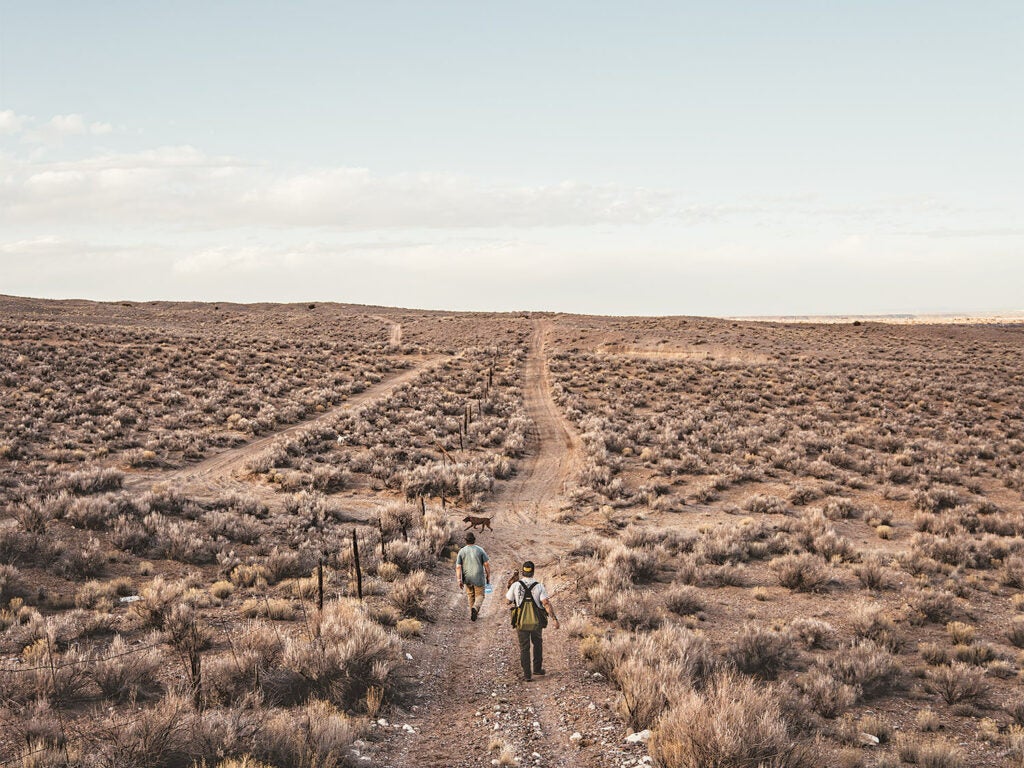 There’s no hunting competition out here, but there are plenty of other folks to keep tabs on. We bumped into strung-out squatters, would-be truck thieves, and one fascinated dirt biker who dismounted to trail behind us and watch Hashbrown hunt. Kevin Jackson (left), who owns Big Sky Bird Dogs, hustles along a fence row ahead of Sladen. 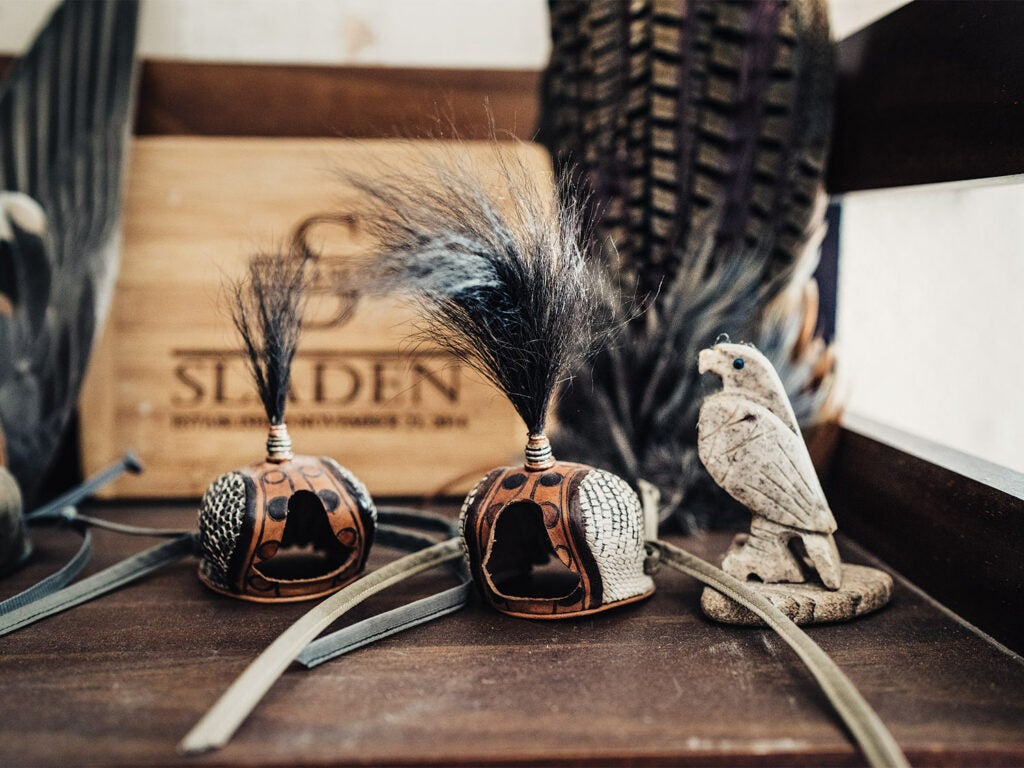 There’s no such thing as casual ­falconry. Sladen owns three ­raptors, and his house is full of hunting photos, mementos, and sometimes even birds. Hoods, like this pair made for Harris hawks, keep the birds from getting distracted during training. 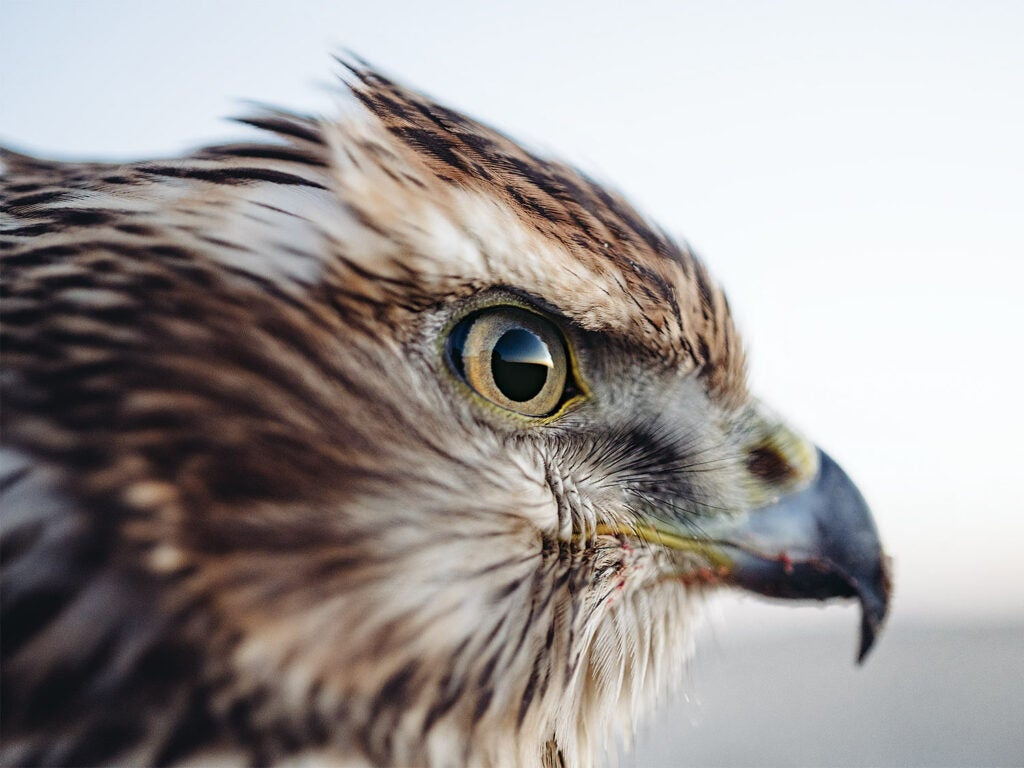 Goshawks use two main hunting tactics; both require locking on to quarry like a fighter pilot locks on a target. If Hashbrown can’t intercept it, he’ll give chase. His prey’s best bet is to break his visual fix by veering off-course. As Hashbrown grows into an adult, his eyes will turn blood red and his tan feathers will molt as they’re replaced by steel-blue feathers. 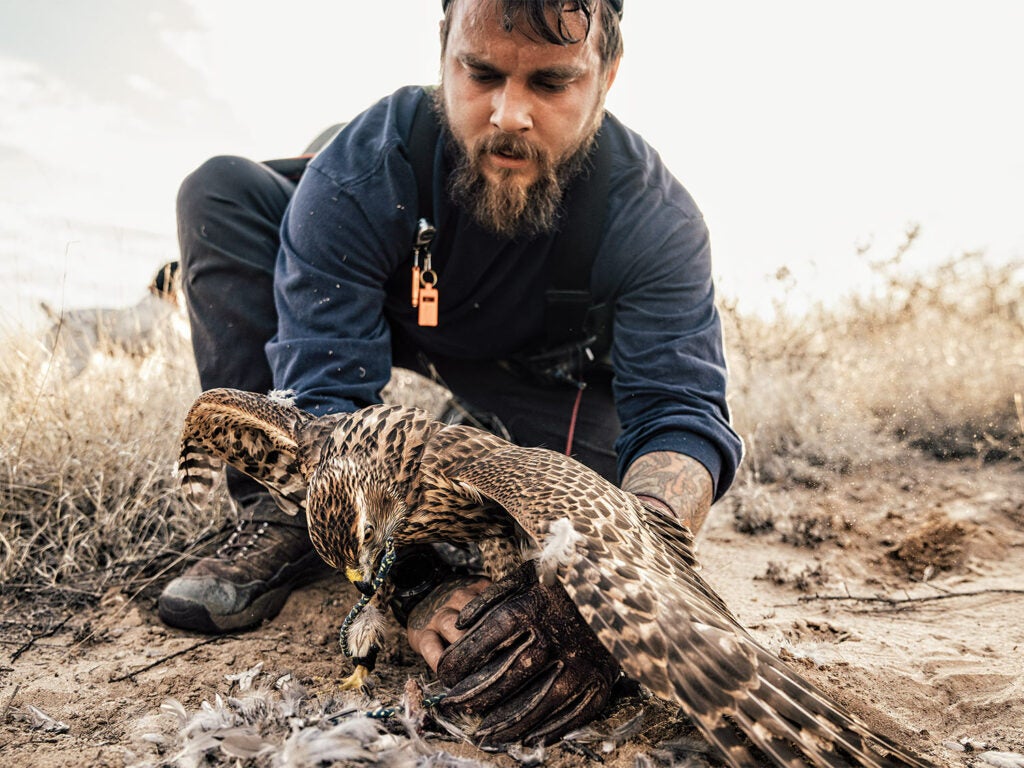 As Hashbrown plucks feathers from a Gambel’s quail, Sladen prepares to swap it with a ration of jackrabbit. He lets the hawk enjoy his catch, uses meat as a reward to build confidence, and keeps the quail for himself.
Natalie Krebs